Jerusalem has a hidden gem amidst its accommodation offerings. In June 2019, we were lucky enough to stay at the YMCA Three Arches Hotel. 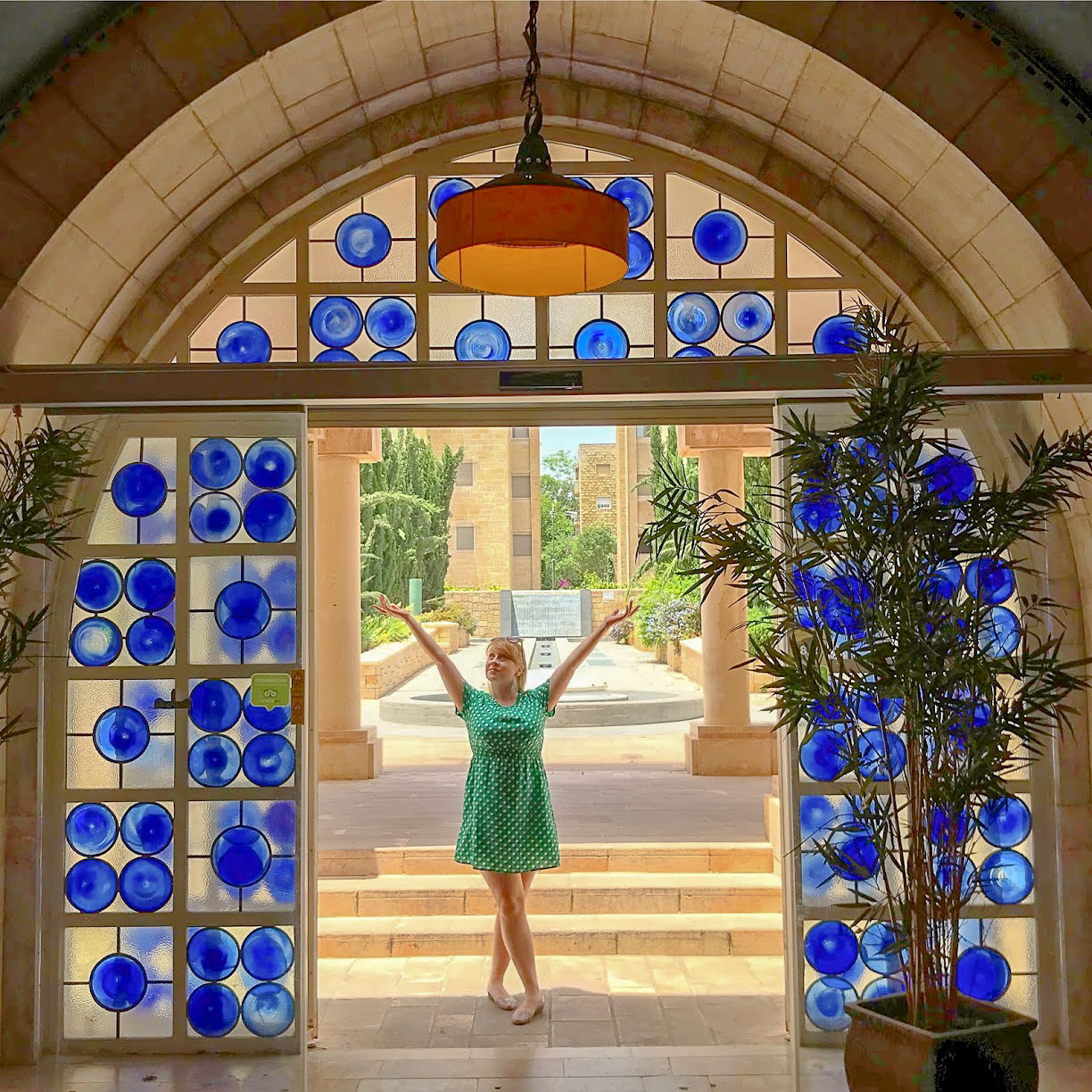 OK, let’s get it out of the way early. No, there isn’t a line up of hunky guys dressed as various male stereotypes here to welcome you with a song (although I do look like I am starting with the Y in that photo). Instead, you are greeted with the wonderful design of the YMCA Three Arches Hotel. The building (designed by Arthur Loomis Harmon, one the architects behind the Empire State Building) was originally designed with three wings and its centrepiece, the tower….but more about that later. 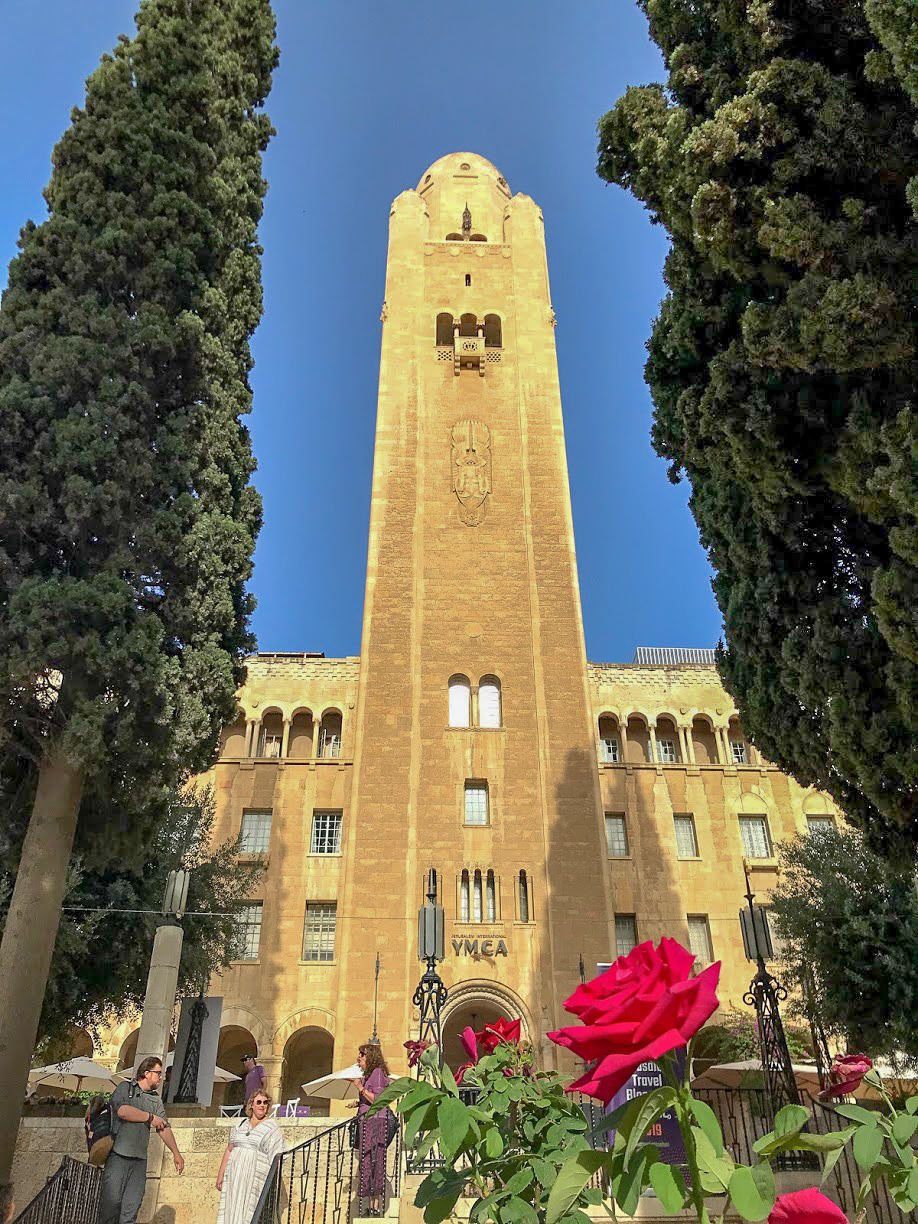 Right opposite the hotel is the King David Hotel, built around the same time, YMCA Three Arches has a fantastic location within the city. You can reach the trendy downtown triangle, a pedestrianised area that is great for shopping and dining. Walk fifteen minutes in the other direction and you reach the Old Town and its many wonders. If you want to reach the Mahane Yemuda market or main train and bus stations, there is a light rail station three minutes away.

The lobby was certainly enough to give you neck ache. The blue ceiling of the main reception is gorgeous and contains little hints of the story of Jerusalem. Do you see the crown of thorns chandelier? We loved the beautiful blue, starry sky.

After you’ve taken that, and the lovely old wooden details, you notice the interesting ceiling in the lobby. It is made of leather from a destroyed mosque in Damacus. There are lots of little hints of history around here. For example, the furniture in the lobby dates from pre-WWII. The YMCA took it into storage to protect it during the war and the families ended up donating it.

Despite YMCA standing for Young Men’s Christian Association, this building has nods to three major religions throughout the building. Christianity, Islam and Judaism. These are intertwined with the three pillars of the YMCA philosophy

Being a three-star property, the YMCA Three Arches Hotel rooms have quite a simple design but there are definitely points worth highlighting. We stayed on the second floor, the rooms of which have been renovated. They have a nice statement wall and a clean, simple look. The hotel is waiting for enough funding to do the next wave of refurbishment. 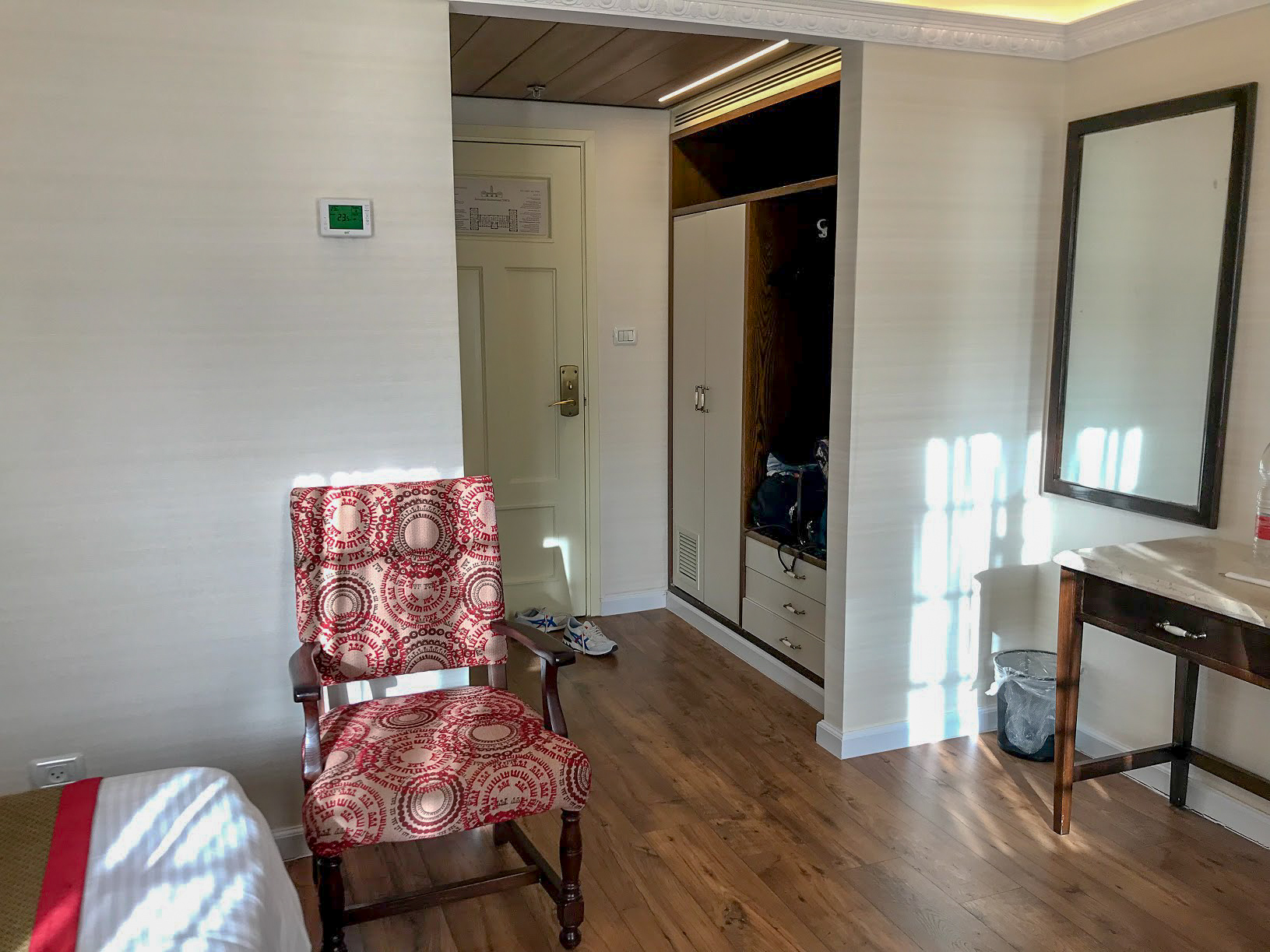 Below the large TV was a table with tea and coffee facilities. I grabbed a blue sachet and made my coffee. I was a little confused about why the granules were not dissolving. After a quick sip, I realised that this was some hardcore stuff! Turns out it was Turkish coffee. Well, after I worked that out, I could let the granules settle and enjoy my thick, caffeine-boosting drink.

Our bed was comfortable but it was twin beds pushed together. To be honest, this doesn’t both us., we have stayed in enough places that do this. However, the duvets were also singles. Again, this didn’t bother us but I am sure it would for some couples. It’s just something to note. 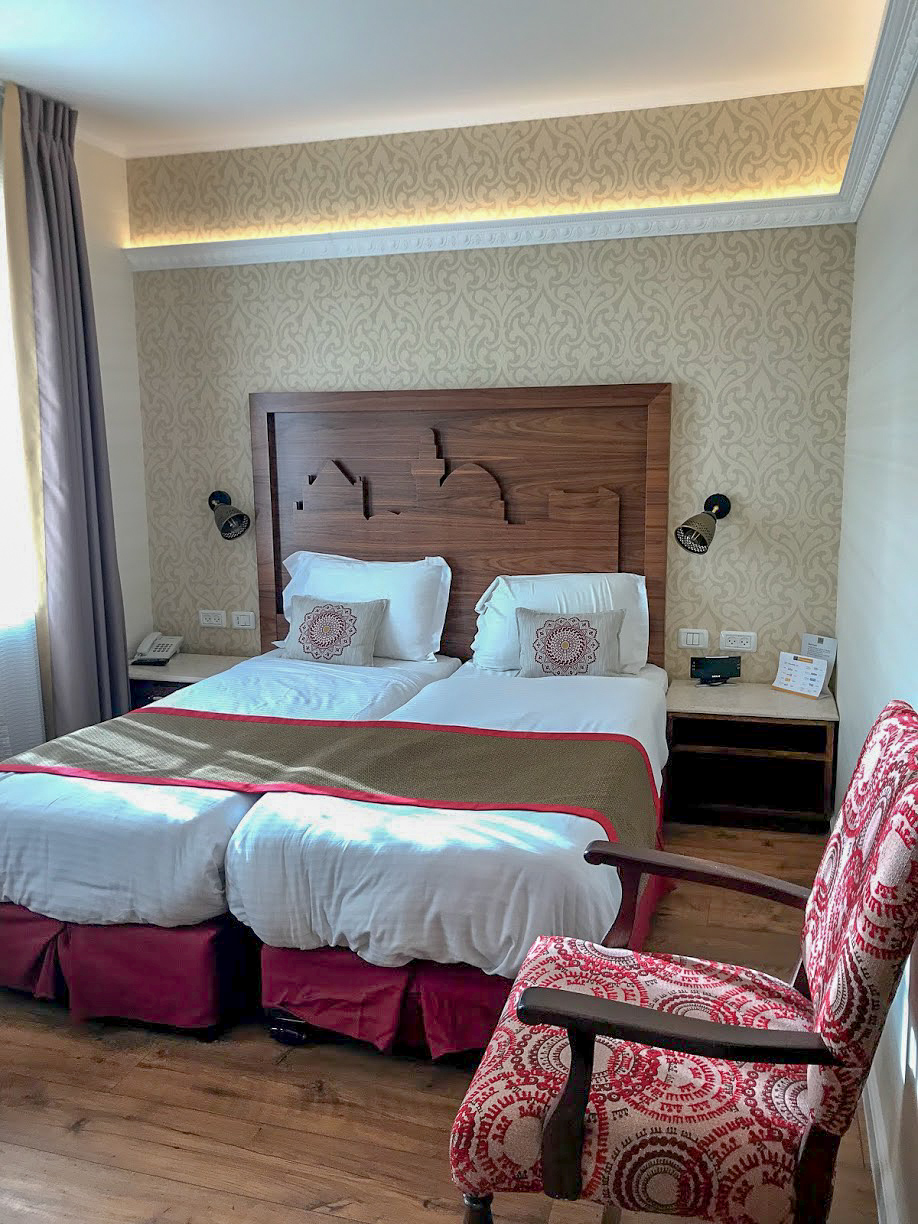 As we were sharing the room between three of us, another of these single beds was in the corner. We all found them comfortable and slept well. 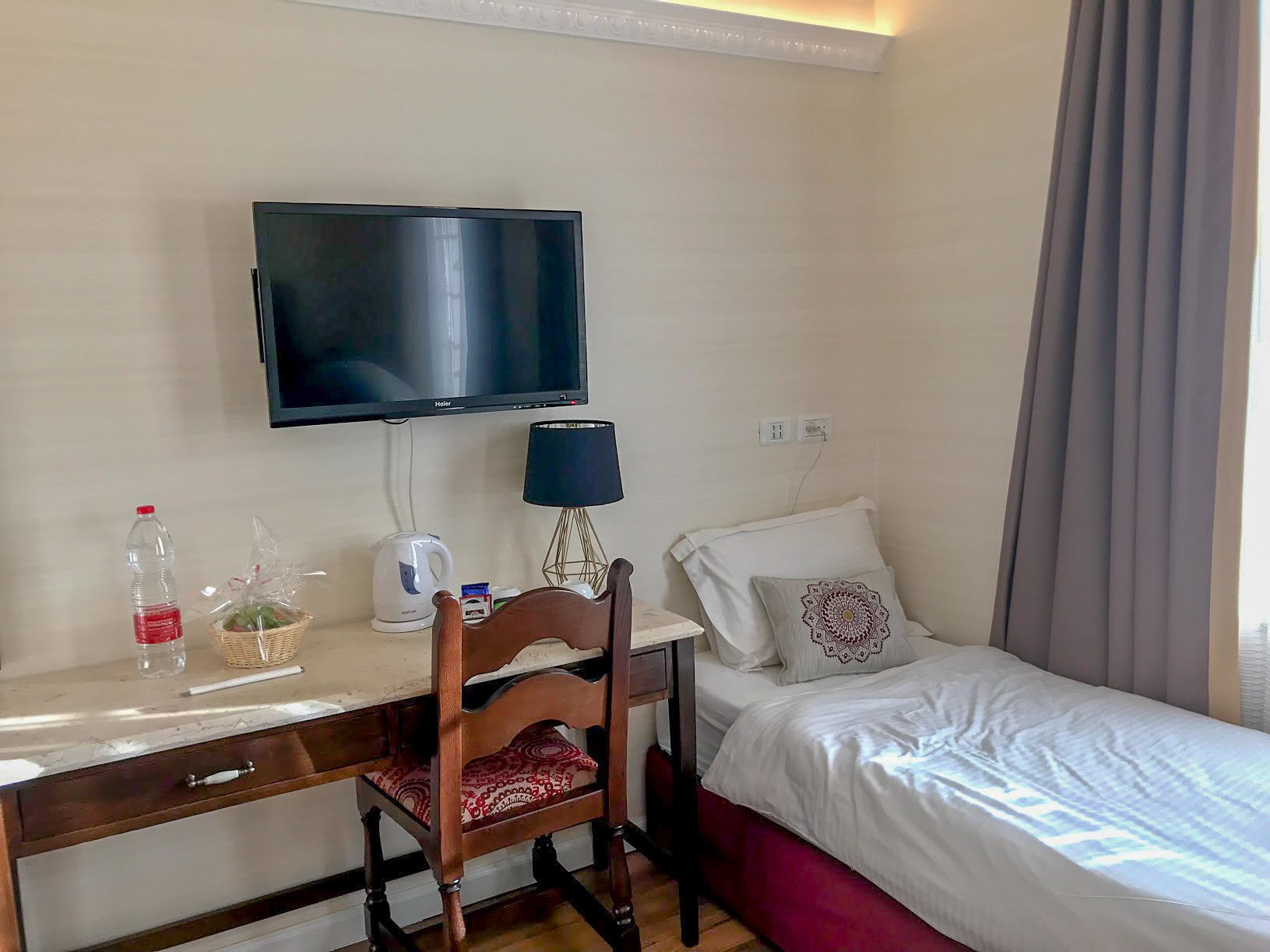 This was much nicer than I expected. The rooms on the third floor that haven’t been refurbished yet have much older bathrooms with showers over baths.

Our shower was a nice big, walk-in affair. It had one large, overhead rainfall head and then a little flexible head. I had no problem getting hot water, and it was strong. There was a little shelf for shampoo etc which was a nice addition.

On the main sink, we got a supply of small toiletries. With the colour of the shower gel, I thought it was going to smell of boy (you know that “blue” smell). Instead, it was pleasantly sweet. I couldn’t identify the smell but it was good.

I became slightly obsessed with the lighting fixtures in the room. They were very pretty and if they had fit in my hand luggage, the YMCA may have been a couple of lampshades less. 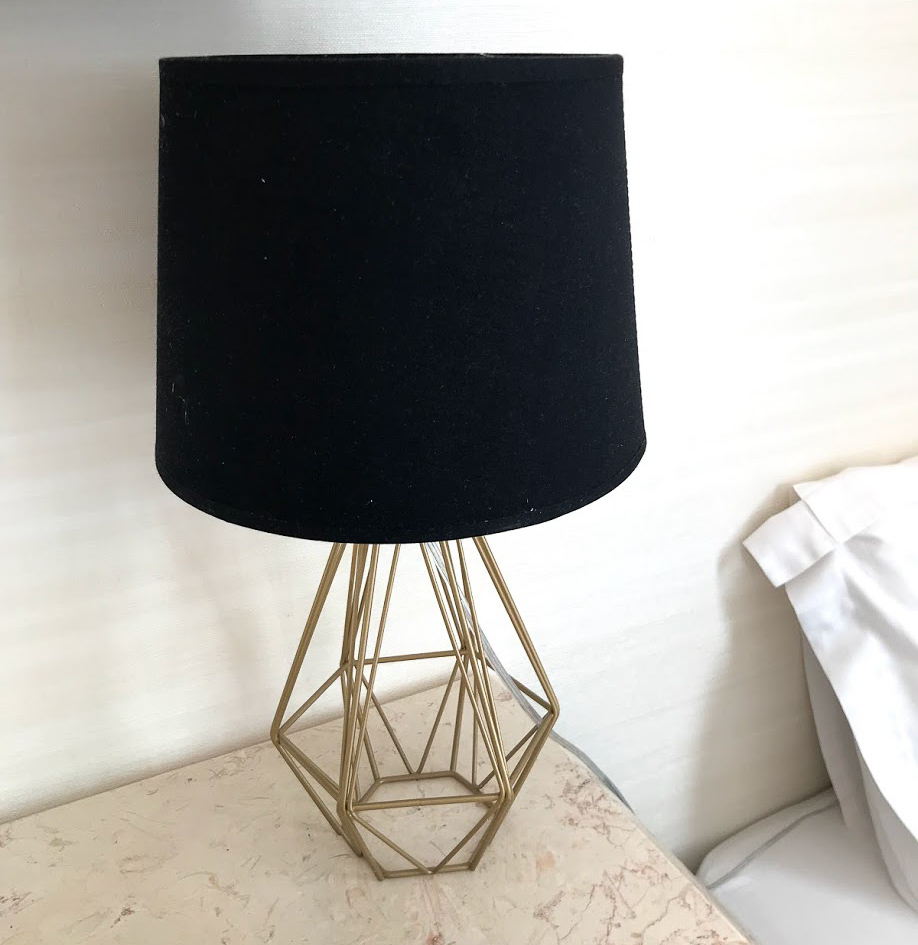 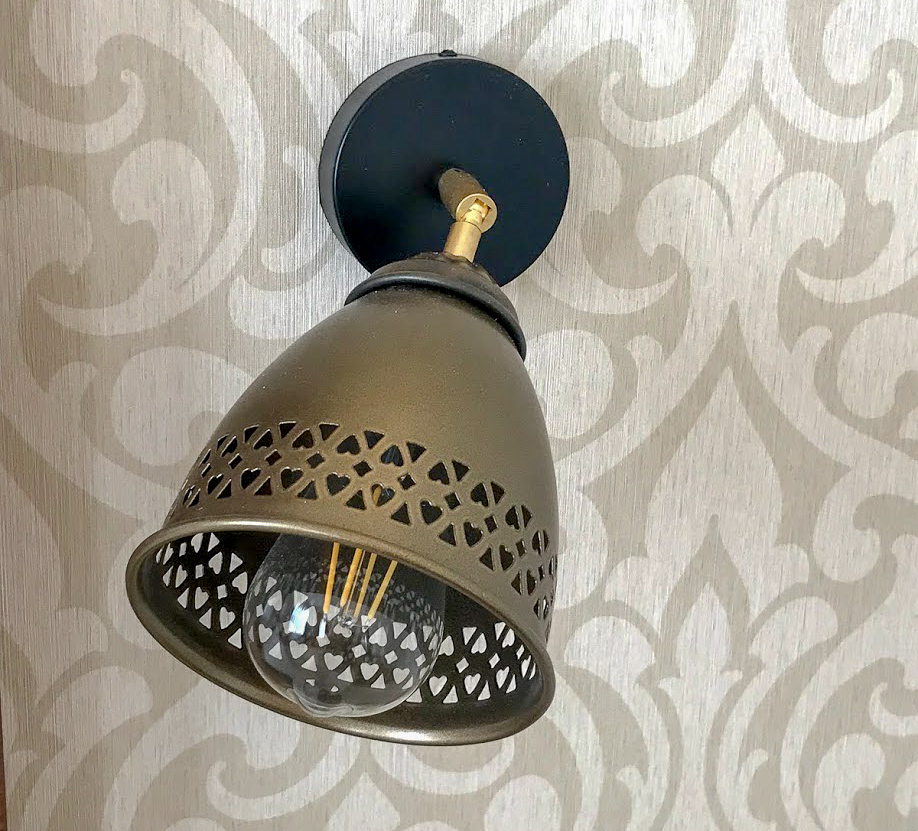 Now, this is a huge selling point! A healthy body has always one of the core YMCA values. Here at three arches, there has always been a sports centre, but very recently they decided they had to vacate the pool that was getting old and tired. It was Jerusalem’s first public pool, and as such, was looking a little worn. Knowing they had outgrown the space, the instead built a huge sports centre that is partly subterranean. This air-conditioned temple to fitness wouldn’t be out of place in any world city with its first-class facilities.

There is a gym full of fancy new equipment. (Is it bad that we were admiring the little TVs?) this overlooks the half Olympic pool full of lap lanes. There are also studios that overlook the pool for yoga, aerobics and other classes. Considering it is partly underground, the whole place is full of sunshine and feels wonderfully airy.

Guests can use the centre for free and if you stop by the reception, you can get a timetable of the classes and pool times. Alternatively, check out the website here.

142 feet tall, this tower gives a stunning 360 view across Jerusalem. 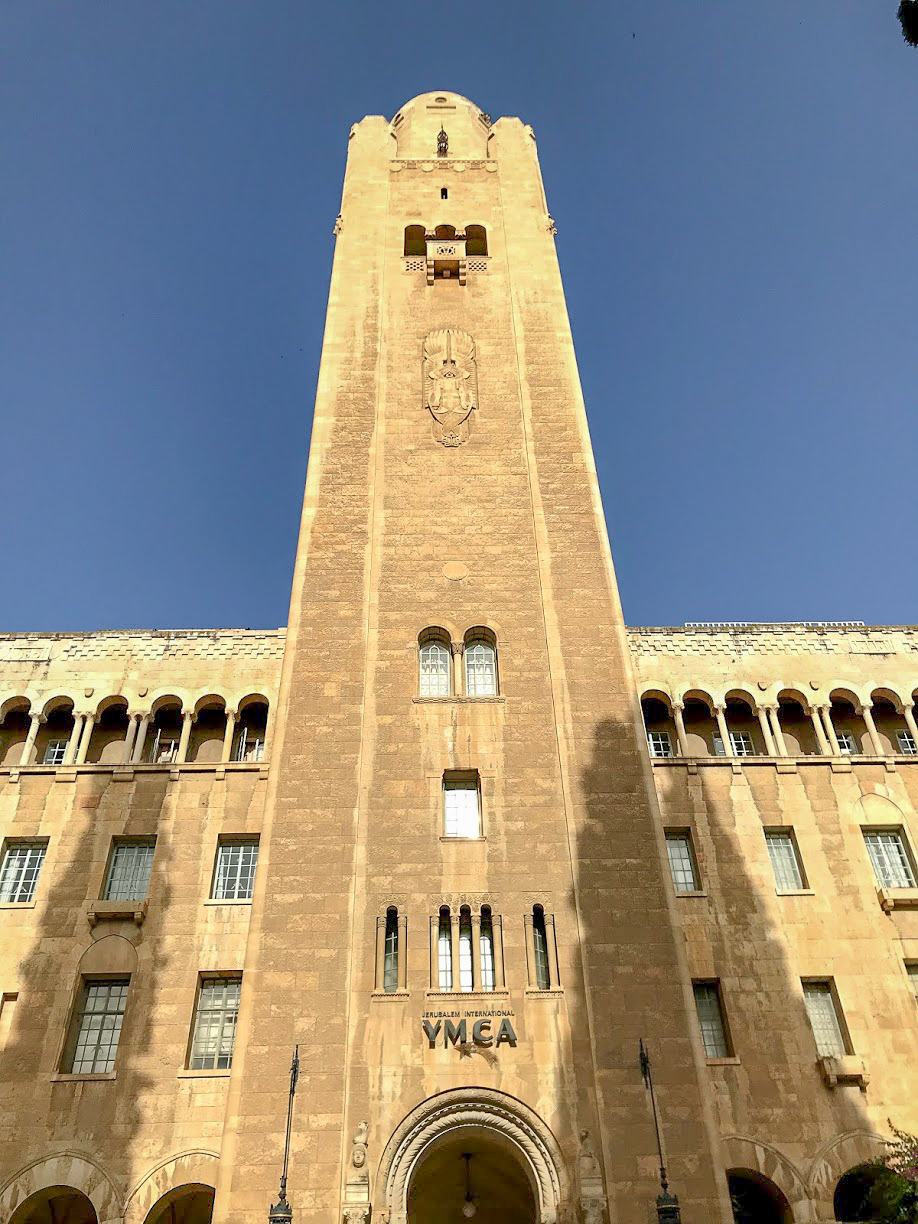 To reach the top, guests squeeze into the teeny lift and slowly ascend. As you leave the lift, you can head down the stairs to see the impressive collection of bells. These 35 bells were made in the UK and still ring out during special concerts.

Up a spiral staircase, you arrive at the top of the tower and it’s impressive vista. The four sides of the square room have doors out onto the balconies. 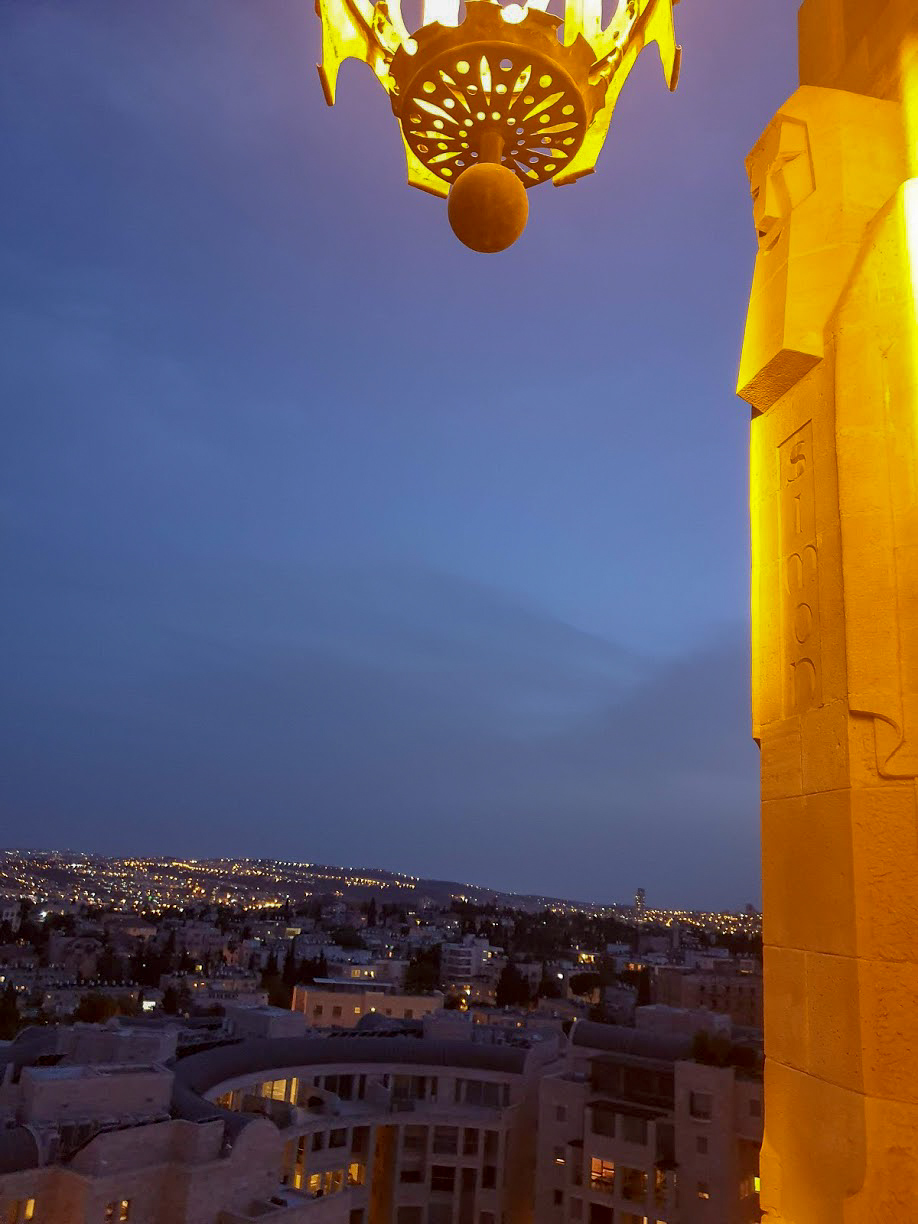 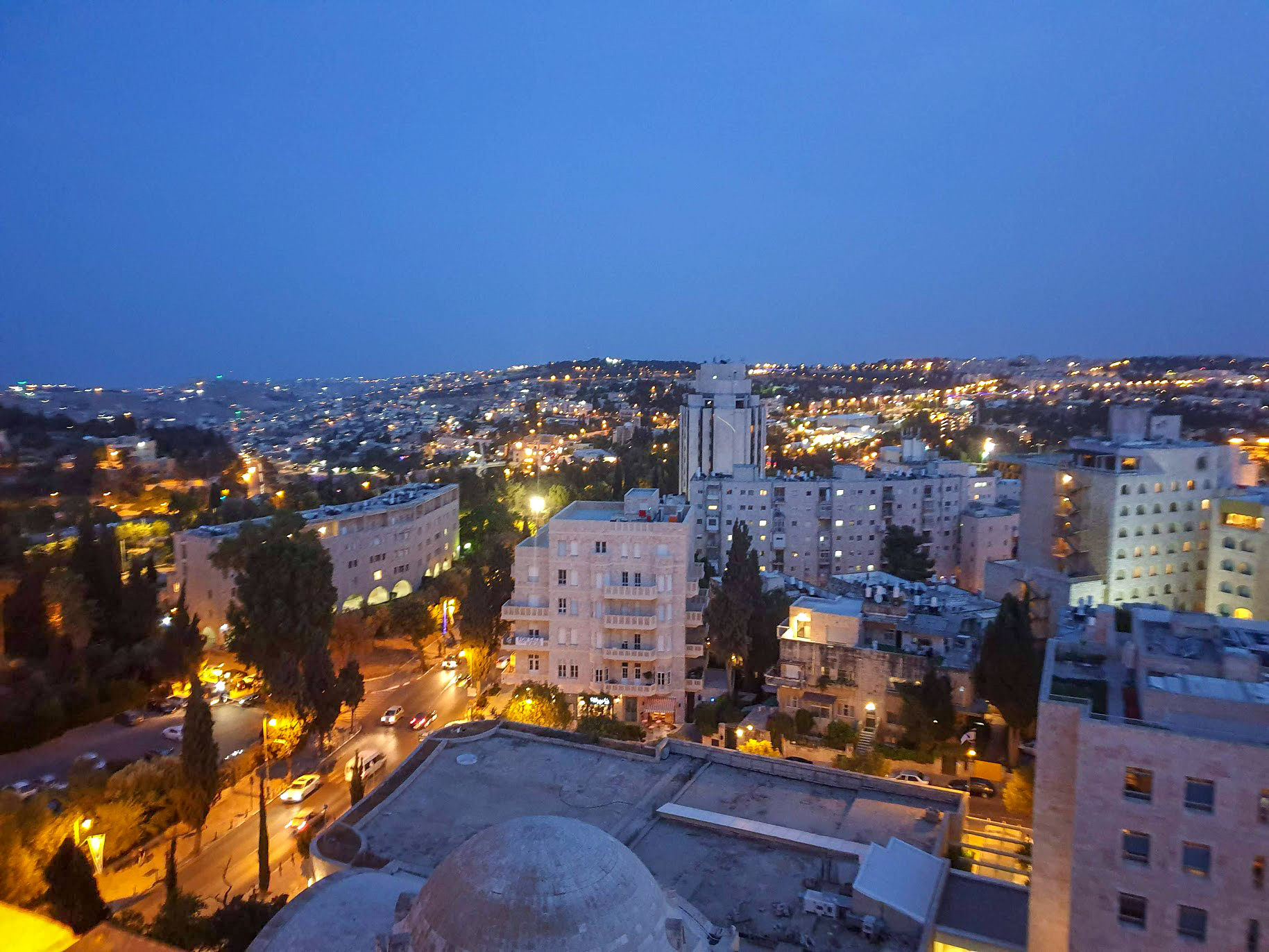 We loved the original brass plaques, worn with age and showing rolling hills where city has since sprung up. We also loved the carvings on the outside of the tower that we noticed had the names of some of Jesus’ disciples. 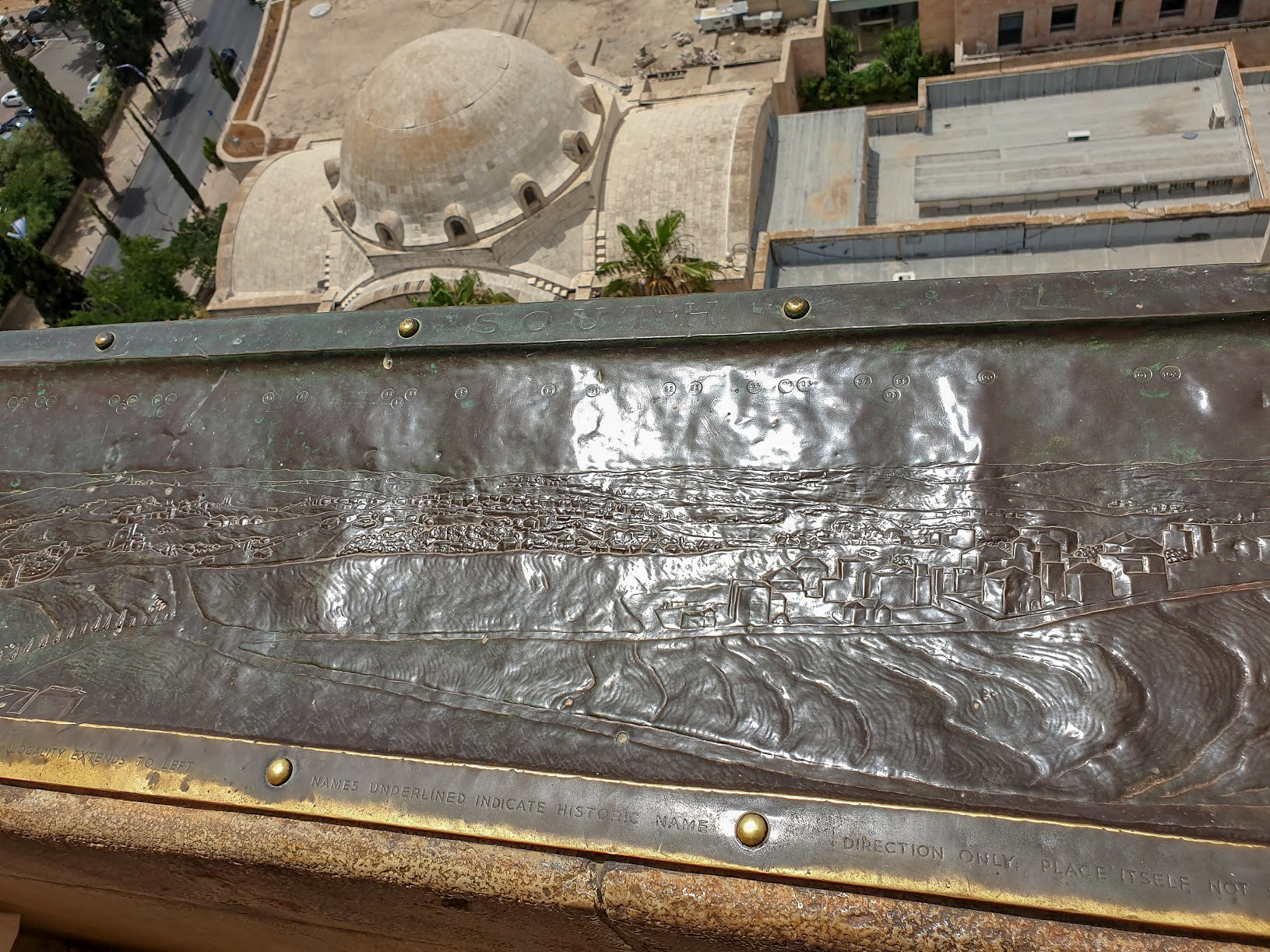 This 600-seater theatre has been housing concerts, plays and talks since the YMCA opened. It ihas some lovely period details and we were sad not to have seen a show during our stay.

This small, underground chapel is a quiet place to worship. Groups of visiting pilgrims can use this space. The spiral staircase is quite tight but it is a lovely space.

Every morning the restaurant serves up a nice buffet breakfast. We had different options every morning so it is nice to know that is all fresh and will always keep you guessing.

There was a cold bar with labneh, yogurt and other dairy delights. Next to that was the toaster which in the grand tradition of hotel toasters everywhere was too slow for my lack of patience. Instead, I grabbed one of the small whole meal rolls to mop up my hummus.

The hummus was set with other salads and veggie items. I have never been one for salad at breakfast (or ever really) so I skipped most of this in favour of the hot dishes. There was eggs, sausages, pasta and other interesting options that were different every morning. 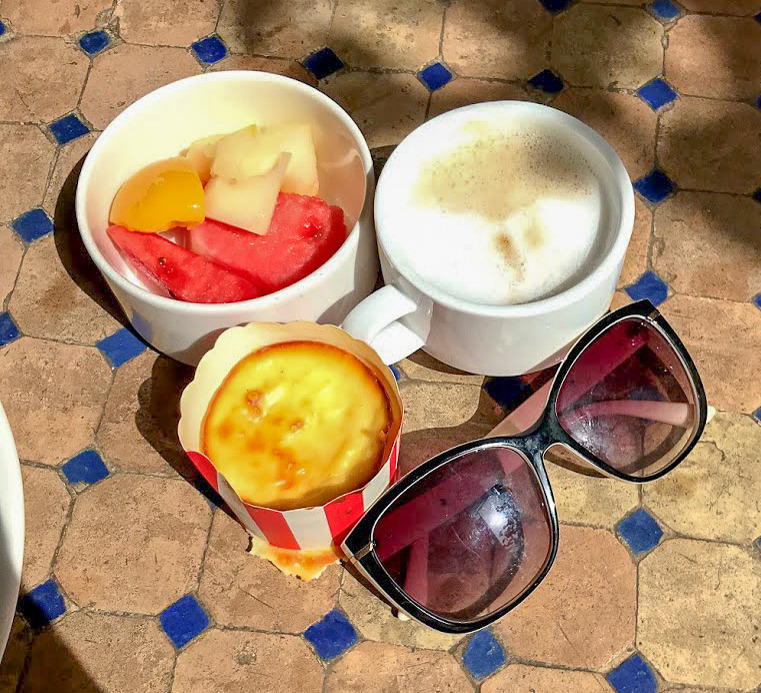 Sitting outside in the sunshine was the most wonderful way to start the day. Hotel guests get the pleasure every breakfast but for those outside the hotel, the restaurant becomes public every day from 12:00 – 22:00. We found ourselves out for all our other meals and didn’t get the chance to try any of the dishes but it a nice relaxed place to sit with a cold glass of something. 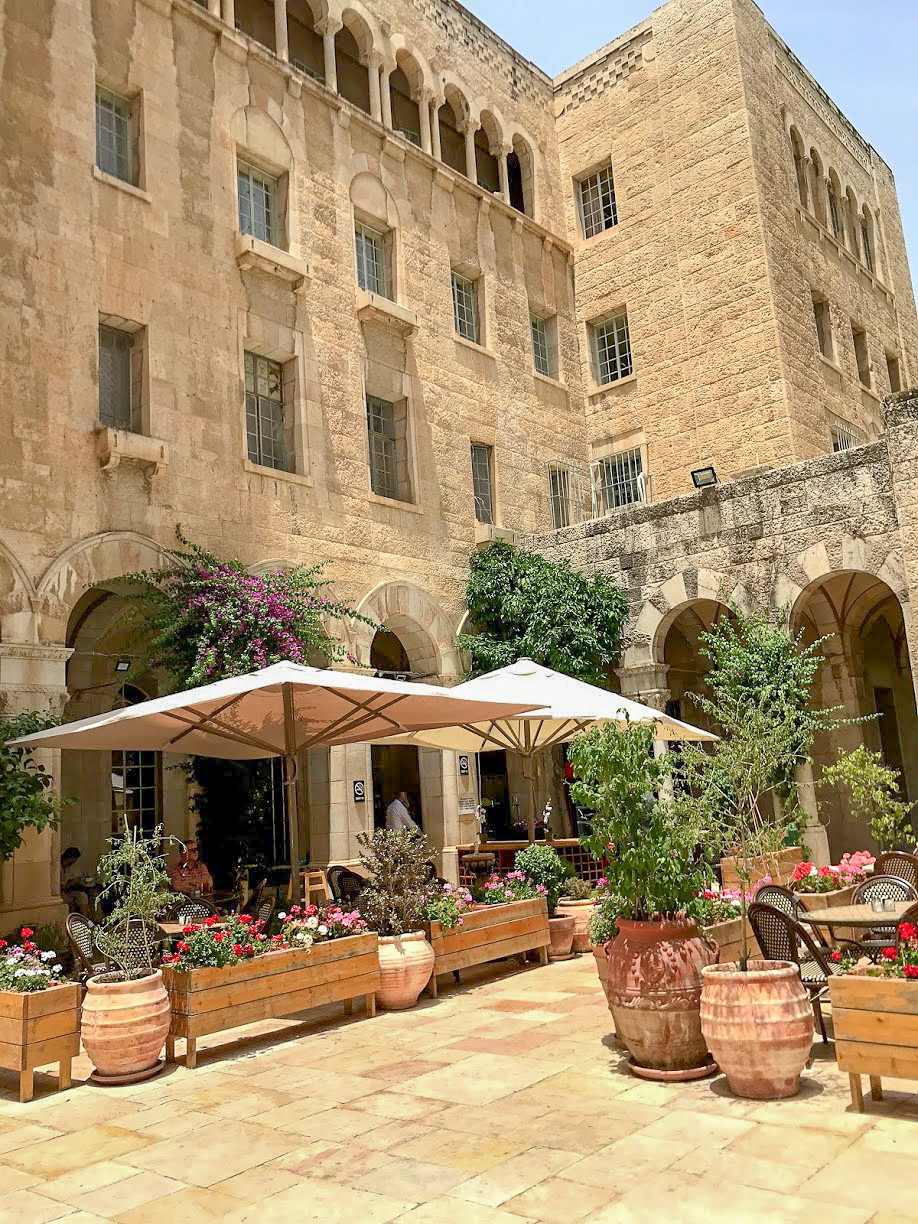 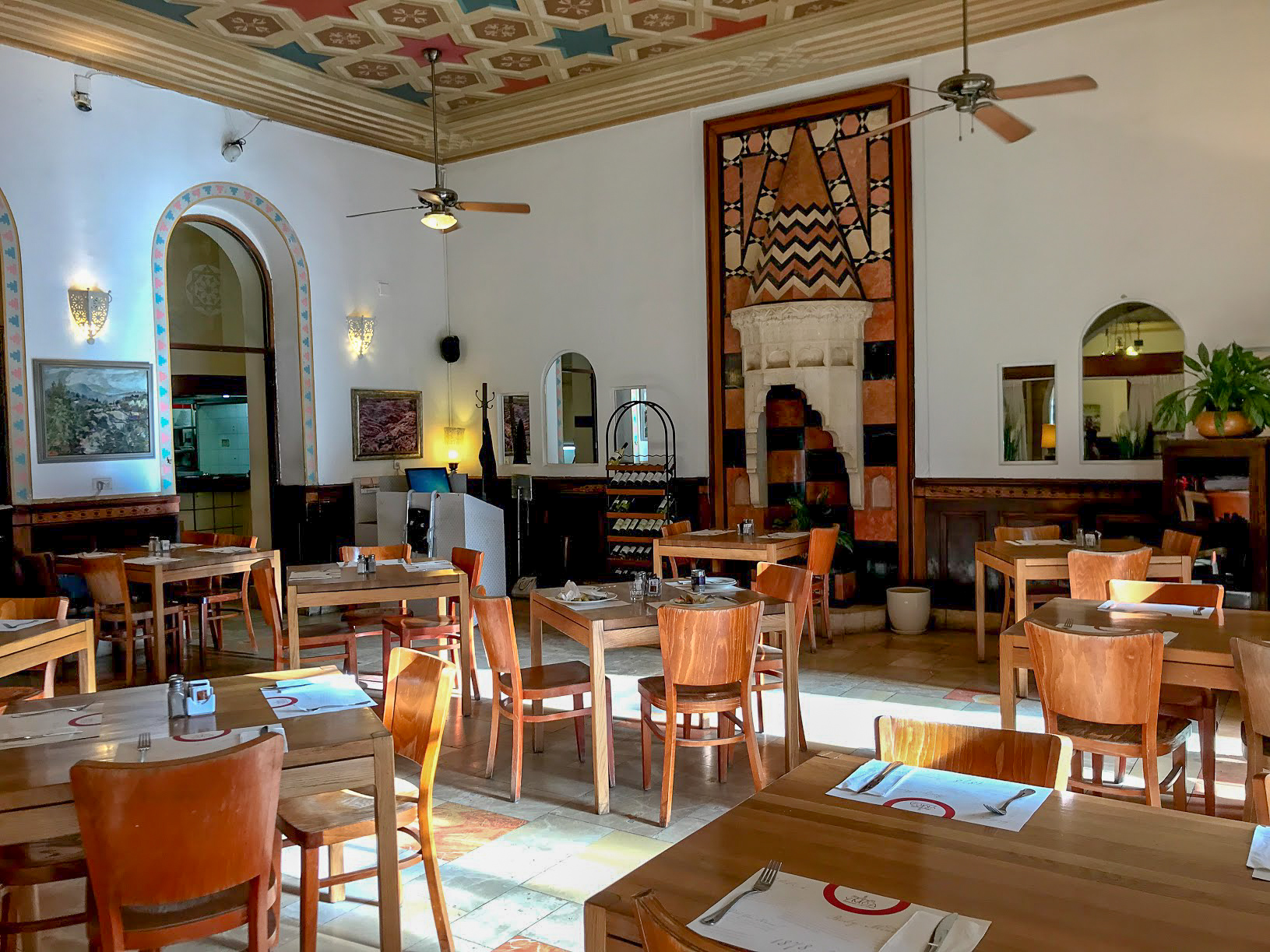 A Little About the YMCA

Body, spirit and soul are the three principles of the YMCA triangle.  Though there is a hotel here, much of the building is given over to the wonderful work the YMCA do. The entire first floor is locked off to hotel guests as it houses facilities for the locals who use the kindergarten, library and other educational classes on offer. 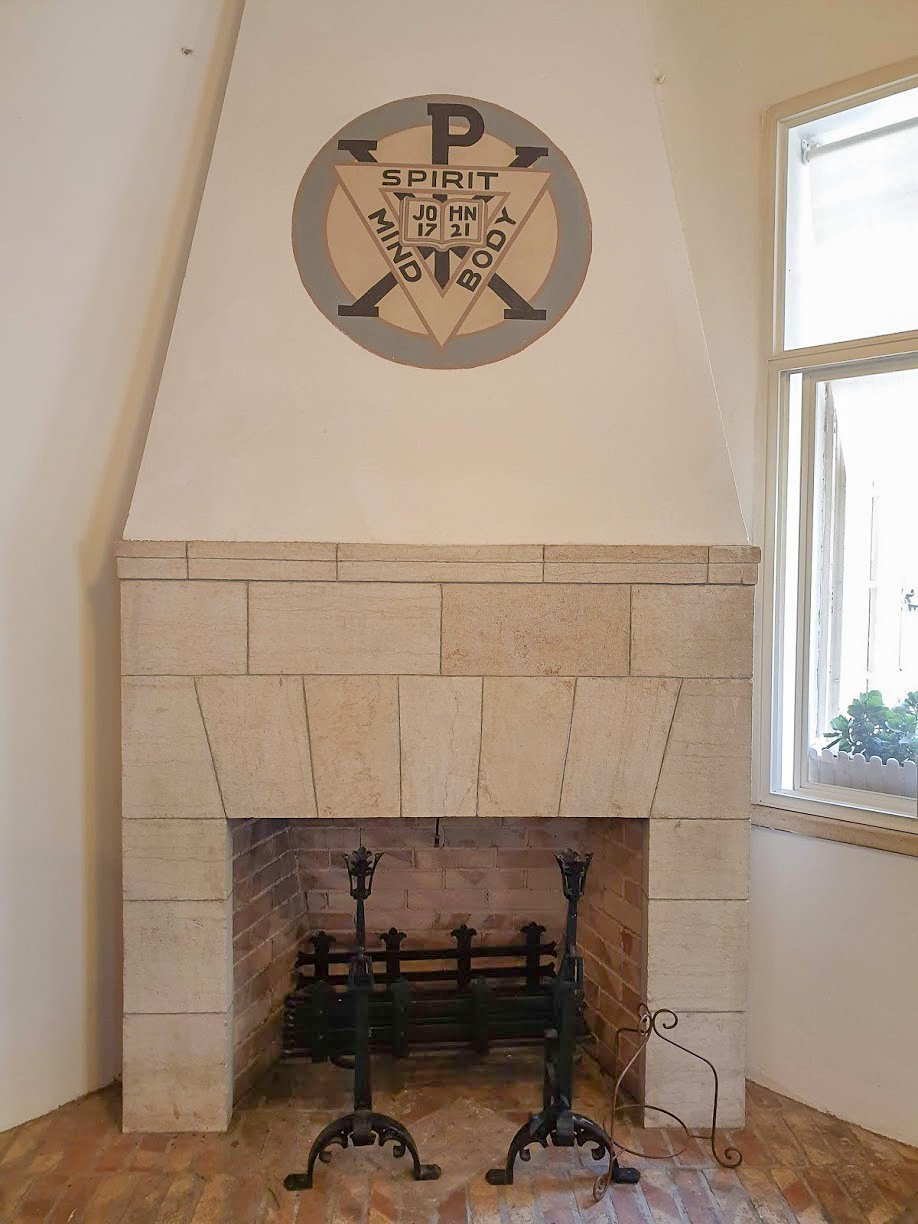 This may not be the most luxurious hotel in town but we felt a real soft spot for it. From the design which at every turn, surprised us with a gorgeous detail, to the interesting history woven throughout the building, YMCA Three Arches Hotel will win you over too.