If you have just two days in Jerusalem, you will want to ensure you make the most of this ancient city. If you are an independent traveller or just don’t fancy following the same tour guide for hours on end, then read on. A mix of religious sites, great views, happiness, sadness and even the odd stop to whet your whistle, this is the perfect Jerusalem itinerary if you want spend two days in Jerusalem. Day One of Your Jerusalem Itinerary – The Old Town

Today you should pound the pedestrianised streets of the Old Town. Wear some comfortable shoes and pack your water bottle. Today is going to be lots of heat, lots of walking and lots of sights!

Try Your Hand at Haggling in The Arab Souq

Enter the Old City via Damascus Gate to the Muslim Quarter. Damascus Gate is located on the old city’s North-West edge, and it is one of the biggest, and most impressive old city gates. The gate was built in 1537 by the Ottomans, but the gate lies on the foundations of much older ones. Turn the corner through the gate (designed to stop an army charging in) and you will be greeted by the edge of the Arab Bazaar.

Follow in the Footsteps of Jesus Christ Along the Via Deloroso

If, like me, you had no idea that the stations of the cross was based in a physical location, rather than the points of the cross, then this walk is a nice way to see some of the old city.

If, unlike me, you know the New Testament back to front then you will find some real spiritual meaning as you pass along the Ways of The Cross. Along this route, there are markers to indicate important spots . For example, the spot that where Jesus fell for the first time is next to the Polish Catholic Chapel. There is a small chapel with a wonky statue and groups of pilgrims praying or singing. In fact, all the way along the Via Delaroso, you will encounter groups of devout Christians who may be carrying large wooden crosses. There are plenty of blogs that will help you through the walk but we chose to use the Jerusalem Lonely Planet guide as their walking tours are usually quite good. (it’s the one time I prefer a LP). Around the corner from the Church of the Sepulcher (the end of the Via Delaroso), this plain church gives one of the best views around. There is no disabled access unfortunately and a fair few steps to ascend. If you easily run out of puff like me, it’s worth bearing in mind that there are a couple of rooms in which to catch your breath on the way up. When you reach the top, you will be rewarded with lovely views (and a few pigeon poops)  . This isn’t a super high tower but the old city isn’t particularly high rise so it is plenty tall enough. Be careful on the way down as there’s no handrail and the ever spinning staircase can make visitors dizzy. The plain interior of the church is not all that inspiring. But it is cooler than outside and gives you access to the biggest selling point, the square tower. 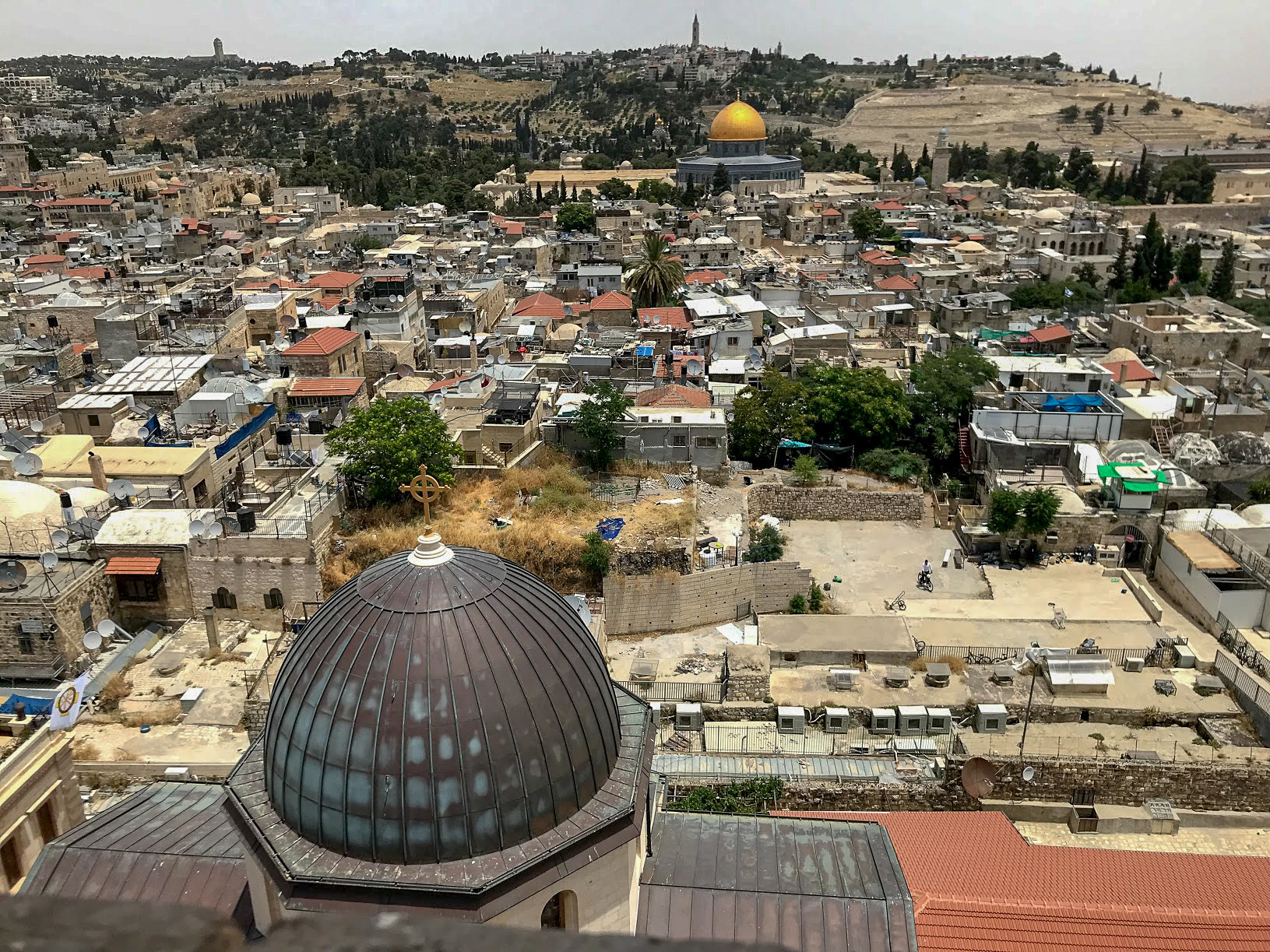 This gleaming dome can be seen from throughout Jerusalem, it’s golden top reflecting the sun’s rays across the Old City. The Dome of the Rock sits on Temple Mount, a spot with more than a little significance for believers of the Old Testament. it is said that God created the world here, and the first human (Adam). It also has great significance for those of the Islamic faith. It is the most important and recognisable site in Jerusalem.

We first saw this from the Jordanian side of the dead Sea, glinting in the distance, and although we got closer, it was shut during our visit due to a protest taking place near by. I fully intend to visit on our next visit to Jerusalem. Feel the Power of the Stone at the Western Wall

The Western Wall, or The Wailing Wall as it is sometimes known, was built in 20BCE by King Herod. It has since become the holiest place on the planet for the Jewish faith. Jews come here to pray at the wall, whether this is out loud or in form of written prayers tucked within the walls cracks. Top Tips For Visiting the Wailing Wall in Jerusalem

It is free to enter but there are a few things to remember. 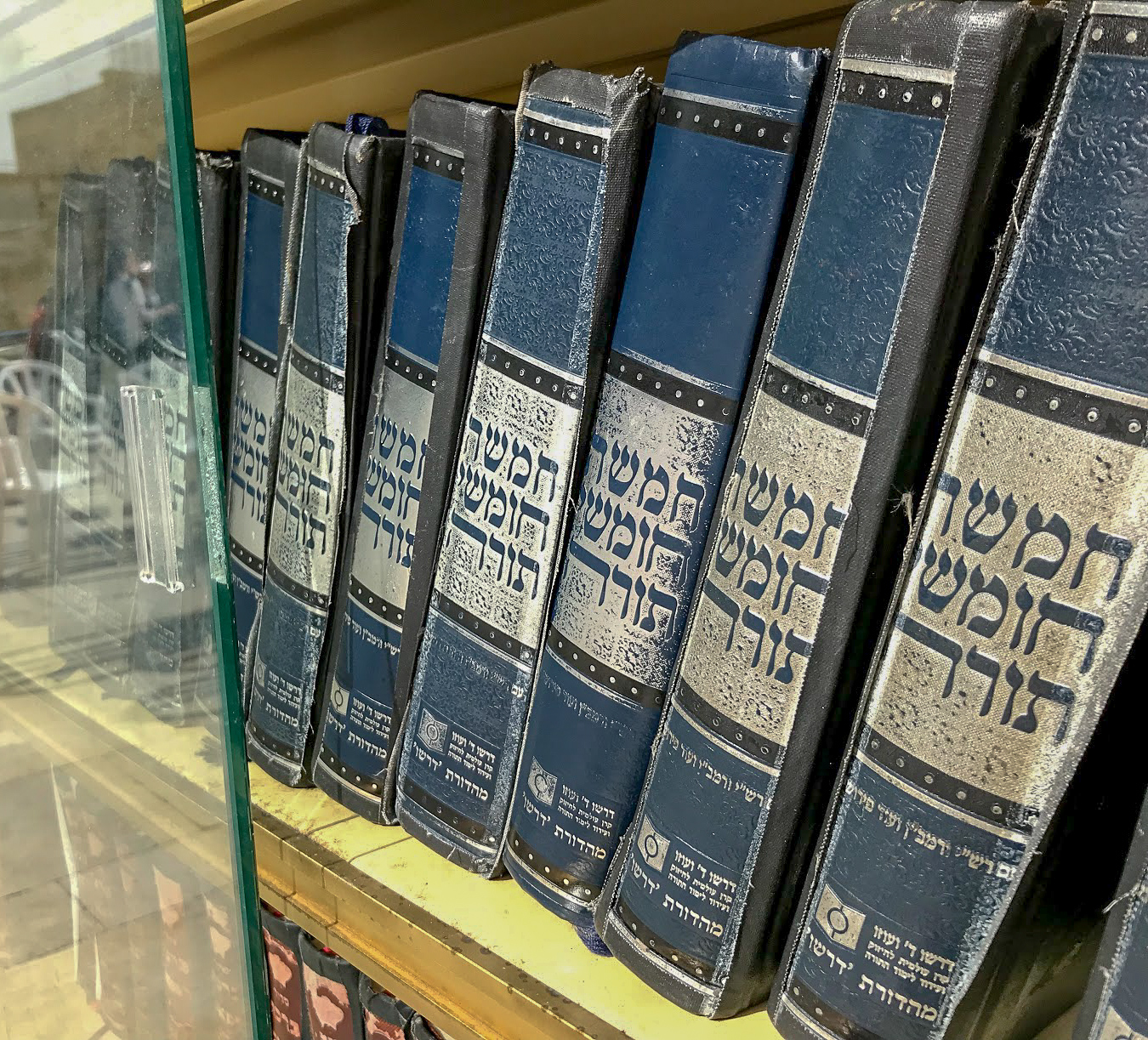 Try Israel’s Tahini Treasure by Enjoying Some Hummus for Dinner

There is some debate about who invented hummus (even on the spelling hummus/houmous). There was even a low key mental war fought between Lebanon and Israel called the hummus war! To be honest, I don’t care who invented it as long as it is smooth, packed full of garlic and paired with something that makes a good scoop!

One of the best places in the city to indulge in some tahini-based pleasure is Ben-Sira Hummus. Finish Your Evening at a Local Bar

Don’t let the conservative nature of Jerusalem fool you. There are hipsters, craft beers and drinking holes galore to be explored. Our favourite discovery was The Sira pub which was packed with locals. They even had a very decent local cider which ended the evening perfectly. Handily, it is just around the corner from Ben-Sira Hummus.

Don’t fall foul of the happy hour offers shouted by promotions guys waving huge cocktail menus. The drinks are well below par, many on the menu don’t actually exist and the whole experience could be rather disappointing.

There are loads of options for your second day in Jerusalem, all of which are outside the Old City. You can get to all of these options by public transport or by hiring a car.

No trip is complete without a dip in the Dead Sea, especially when it’s only a short drive from Jerusalem. This body of water is highly salty and packed with minerals so that people float incredibly easily. Hence the photos of tourists reading papers while bobbing in the water. The closest access point is just an hour away from Jerusalem and can be reached by public bus or by hiring a car. Discover the Nativity in Bethlehem

If you are comfortable visiting Palestine, a visit to the ancient town of Bethlehem is an excellent trip from Jerusalem. You will see the Church of Nativity where the story of Jesus begins, and there is even a few pieces of street art by Banksy to discover. This can be achieved as part of a group tour (open the speediest and easiest way to visit) or independently check out our blog post all about it here.    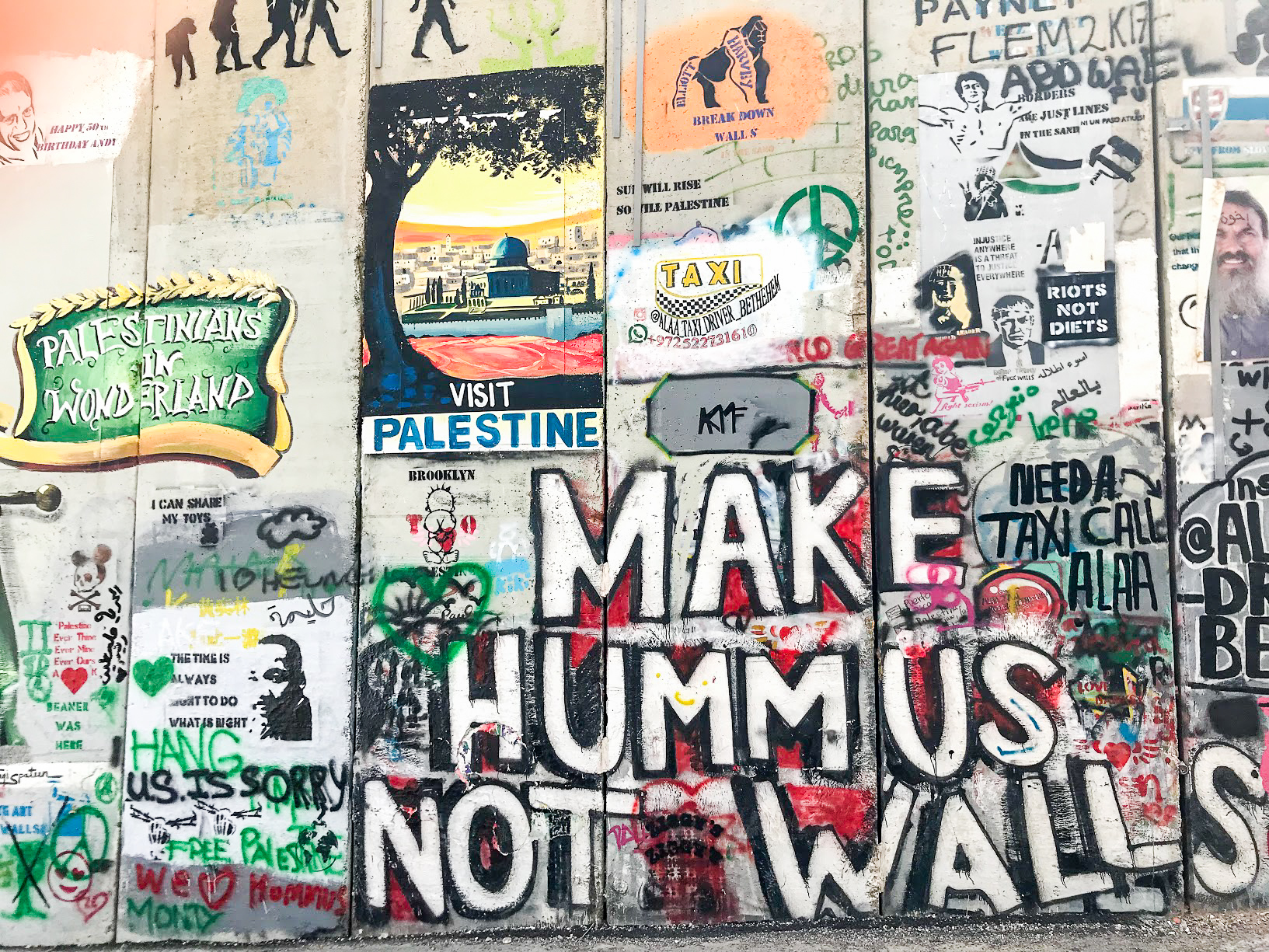 Remember the Lost at Yad Vashem

There are Holocaust museums throughout the world. Some are thought-provoking some, heart-wrenching and Yad Vashem is both. One thing that really got me was that despite the beauty and scale of this museum. There are nine galleries depicting the brutality inflicted on the innocent masses. Particularly moving was the Hall of Names (pictured below) which shows over a million names of those who suffered. Particularly upsetting was the knowledge that the Jews who arrived after the war, and had survived the horrors of the concentration camps are treated with disdain when they first arrived in Jerusalem. There was a general distrust with locals presuming many of the new arrivals had colluded with the Nazis. Thankfully with the passage of time, they were welcomed into society. 

The quickest way to both hipster heaven and dinner delirium, is to visit Machane Yehuda market.  Originally just a produce market, it is now packed with all kinds of ready to eat goodies. We joined a food tour with Delicious Israel (read all about it here) and it was a great way to discover the history of the dishes and nearby spots. However, if you just want to eat tasty things, you wander through and pick things that look or smell good. There is also a burgeoning night scene so it will be a good spot to hang out when the Sun goes down with both craft beers and late night munchies solutions on hand. Hit the Beach in Tel Aviv

Stretching 14 kilomatres along Israel’s Mediterranean coast, Tel Aviv feels 1,000,000 miles from Jerusalem. It is the rebellions little sister who is constantly at odds with her conservative oldest sibling and hours coach ride away. There are lots of places to choose from or with great facilities. If you don’t fancy going along the whole promenade, just flop at the coincidentally-named Jerusalem beach. Pay for a bed and umbrella and a helpful person with a terrifying-looking sand drill will set you up. Remember to keep hold of the receipt as it will be checked several times. This area has bathrooms, lockers and a beach bar, the waiters of which will keep you fed and watered (in return for generous tips).

If you hunt out the smaller cafes, there is a set price list for basic drinks and snacks. These are kept much lower than the bars, so a good option if you are looking to save some Shekels. If you are on a very tight budget, bring it out, water and no valuables and you can have a very cheap day by the seaside.

Don’t forget that the water here is from the Mediterranean and won’t warm up properly until later in the summer. We visited in June and it was still pretty squeal-inducing.

How to Get Around Jerusalem

Where to Stay in Jerusalem

Final Thoughts on Your Two Days in Jerusalem

Jerusalem is a holy city, full of magical sights. It can be hot and dusty but it is utterly captivating and you’ll have hit your step target before you even notice. Your two days in Jerusalem could easily be extended to a three or four day Jerusalem itinerary depending on your speed, and how much you want to see. Hopefully, this blog post has given you some ideas and you have an amazing visit to Jerusalem however long you stay.