https://flyingfluskey.com/tag/EGYPT/Egypt is a wonderful adventure. Ancient landscapes, gods, legends and dusty treasures abound. You can feel like an adventurer just by diving into a souk. Our favourite adventure, however, was travelling from Luxor to Cairo on the sleeper train. Whether you are catching the Cairo night train, travelling between Cairo and Luxor by train (like we did) or catching the night train to Aswan (much further down the line) read on for our full review. 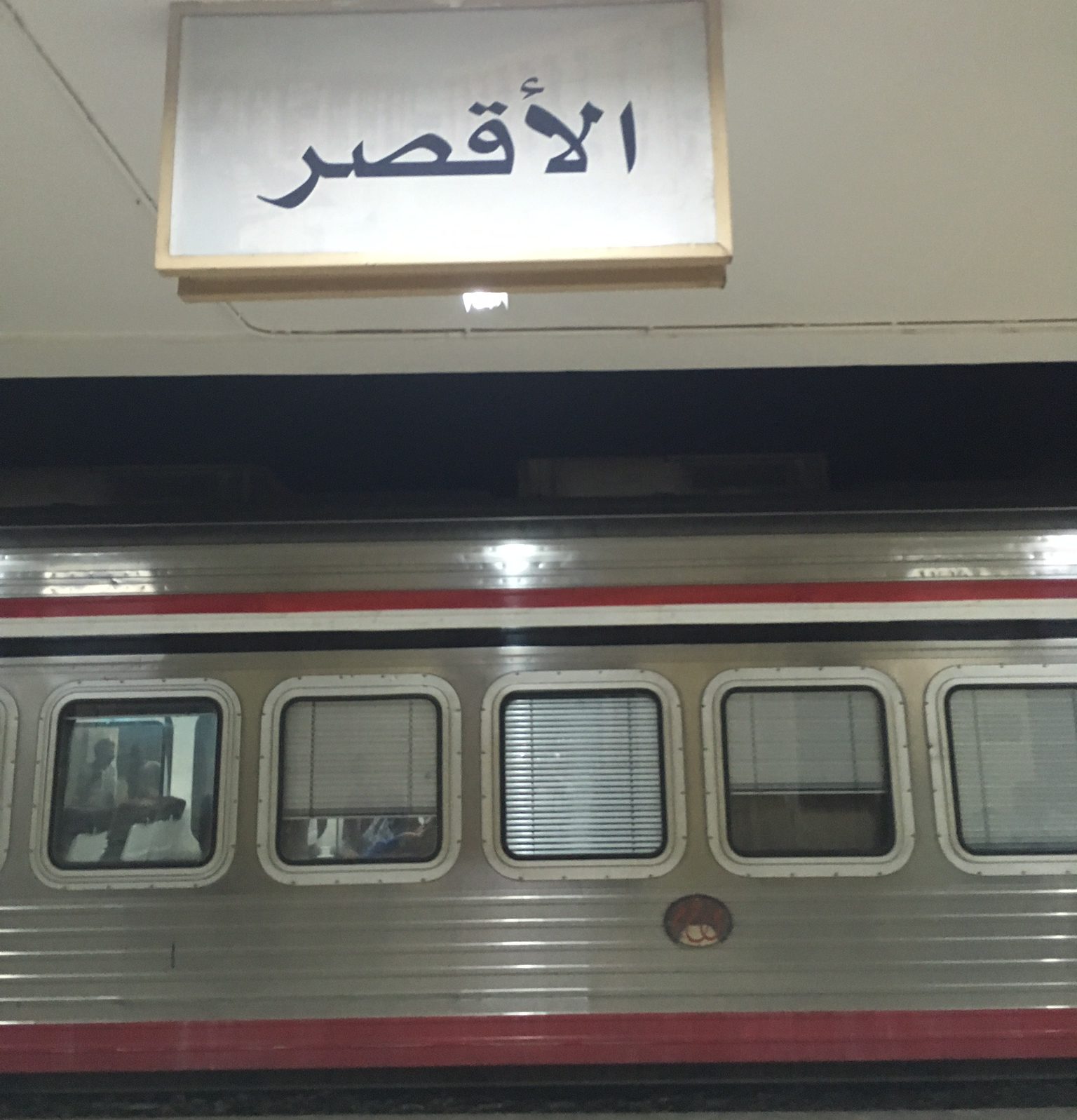 The ERNST company runs a route, primarily for tourists between Aswan and the capital city nightly. We picked the train up at Luxor, where we had been staying for three days.

Check out our hot air balloon adventure in Luxor?

If you are staying in Luxor’s main tourist zone, you will have a short walk to the station. If you are in the more upmarket hotel zone, it is likely you will need a cab.

On arrival, you will be approached by a fair few pushy touts, but they will leave you alone once you are settled in at the station. The main building is large and very shiny. It has reliefs on the wall, and large columns, emulating the famous Luxor temples. 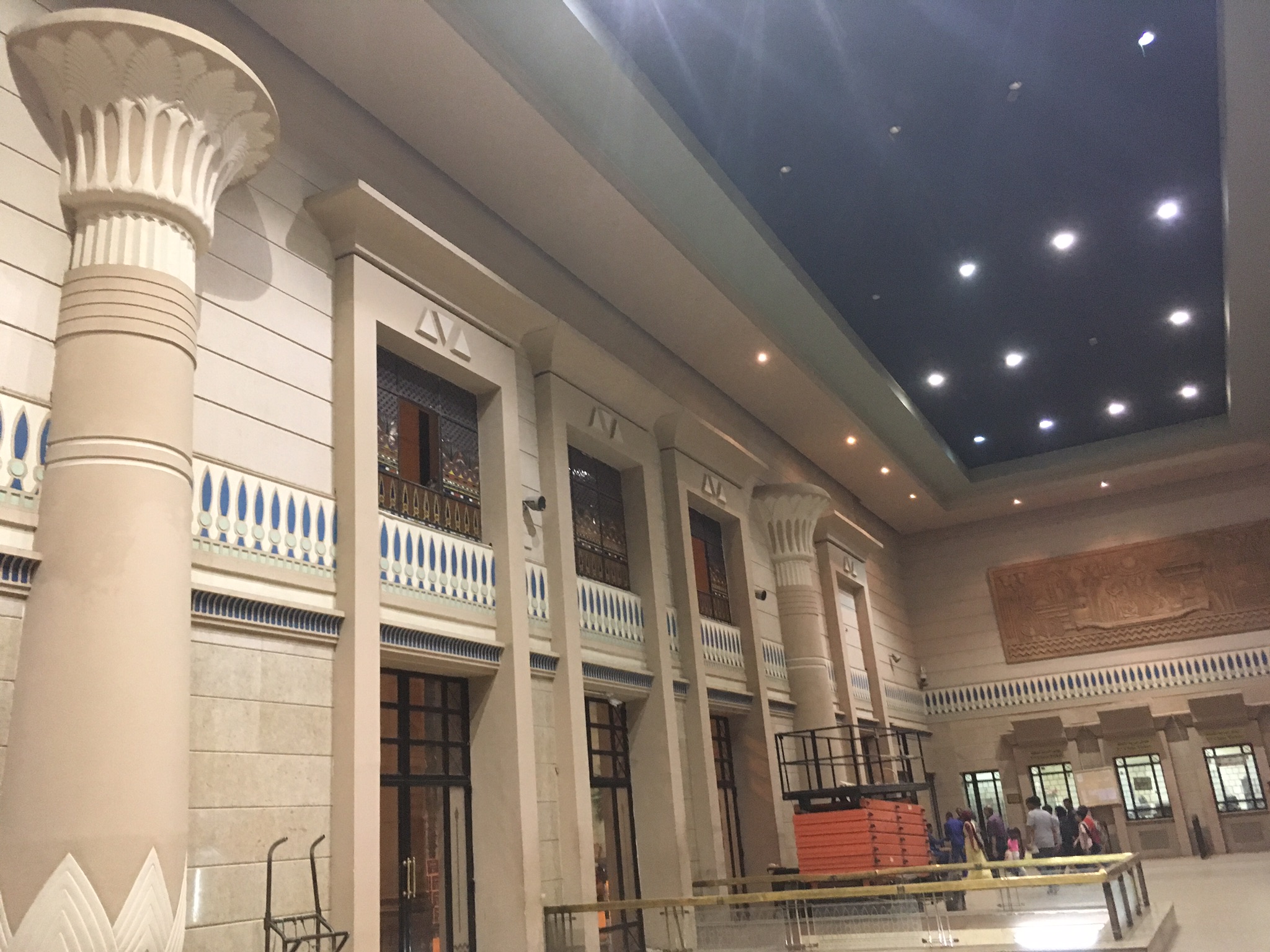 When we entered the building, we struggled to find out where our train would be leaving from. We had arrived with plenty of spare time (I am a big believer in contingency time, for just this reason).

We made it onto the right platform (the one adjoining the station building itself) and waited as our train time came and went. Local guys clearly knew what we were waiting for, and made sure we didn’t board the trains that stopped at the platform ahead of ours. The stuffy night was slightly unpleasant and so we bought some sugary drinks from a vendor on the platform to quench our thirst, and waste some time. It took about an hour after its scheduled time for our train to arrive, and so when it finally turned up, we enthusiastically climbed on board. 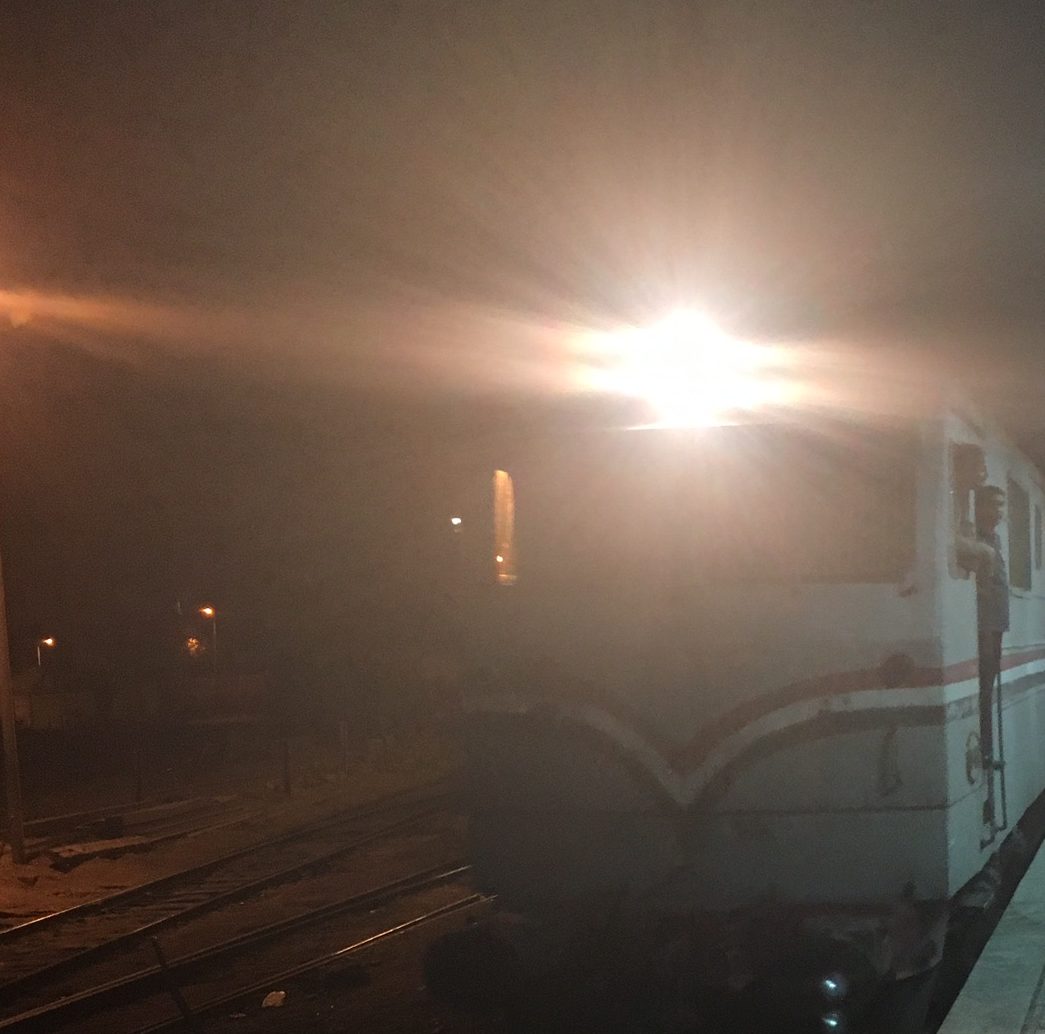 It was easy enough to find our carriage and we scrambled up the steps quickly. Down the corridor we spotted our cabin and gratefully chucked in our backpacks before following them in. The guard came in to make sure we were settled in, and disappeared with a smile.

The Cabin OnBoard the Night Train in Egypt

The decor inside our cabin reflected the colours of the desert outside; beige and inoffensive. You won’t be blown away by the stylish interiors, but they are clean and not falling to bits with a sort of retro sixties air. Think early cold war chic.

There was one long seat to share that faced backwards and had a table built into it. I love going backwards on transport but Mr Fluskey is less keen. On the opposite wall was a coat wardrobe, a locked door to the adjoining cabin and a wash basin. This make me think that booking seats 1/2, 5/6 etc would give you front facing seats. 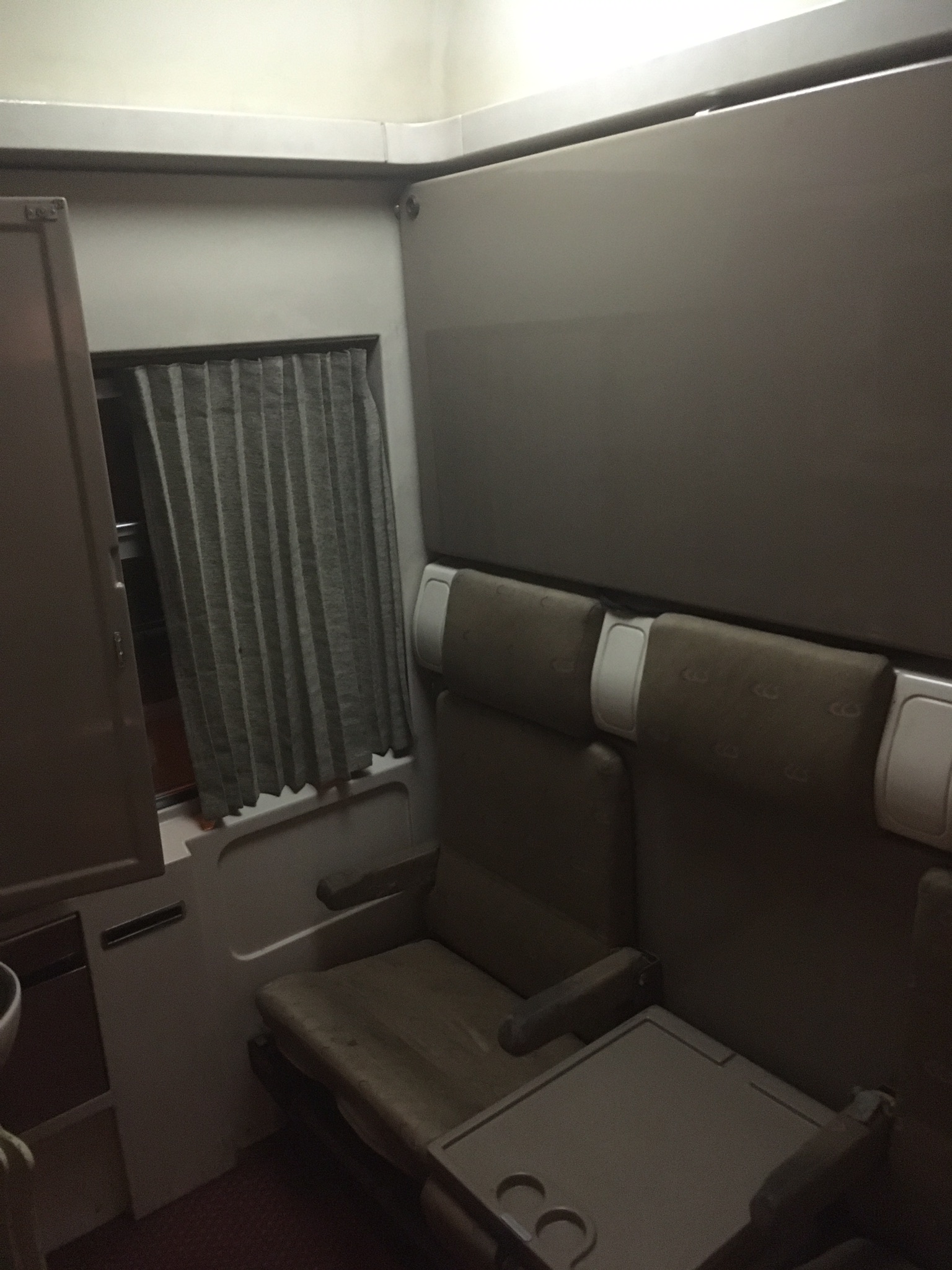 Food is included in the price of your ticket. When you book, you are given a few choices of meal (chicken, meat, fish, veg etc). Mr Fluskey and I both went for the chicken, with a tiny bit of trepidation. 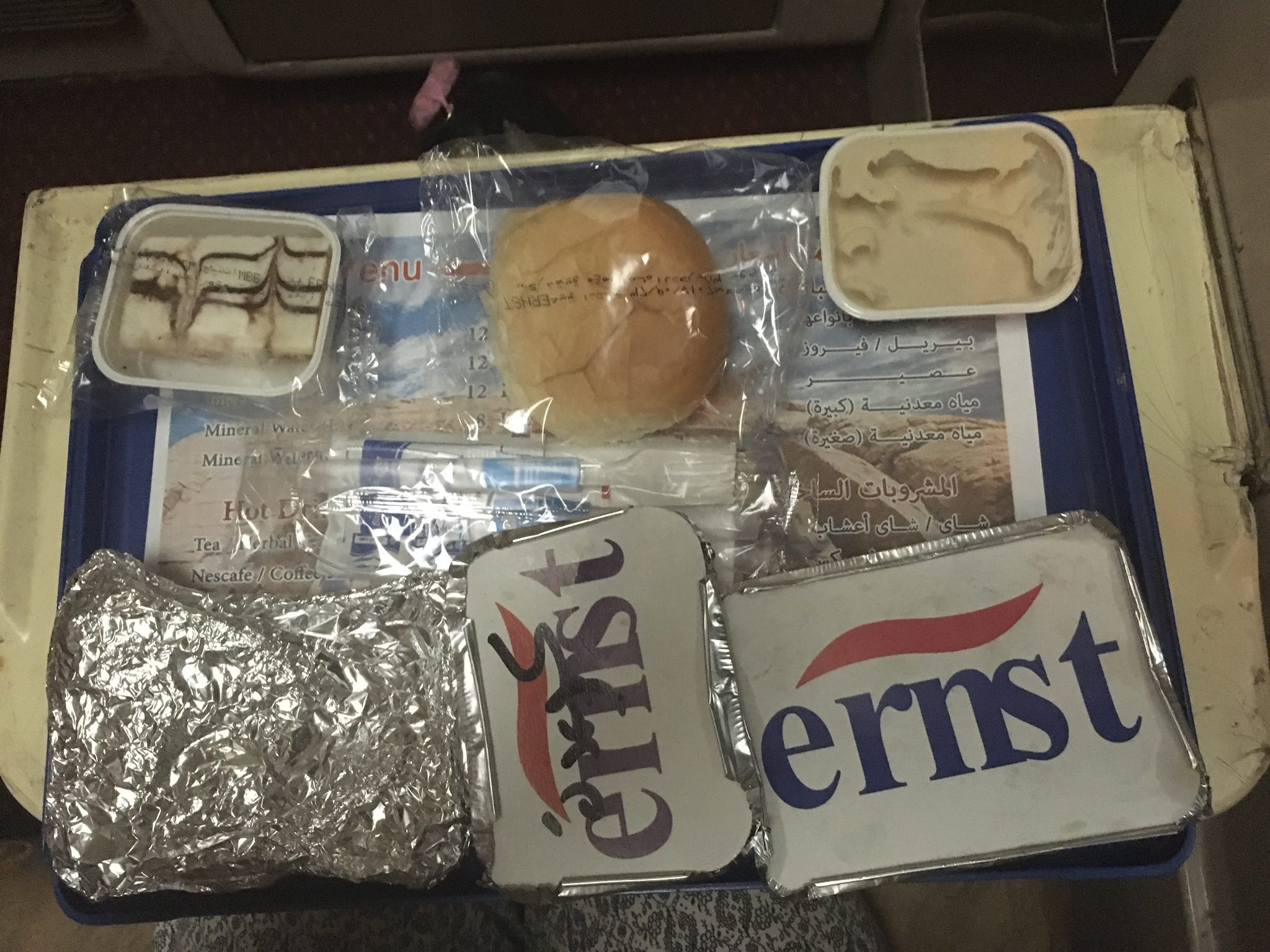 The food was served by the guard, on little plastic trays. It looked, and tasted, like plane food…the kind that people make jokes about. The chicken was unbelievably dry, and the rice was seriously salty. It was enough to leave your mouth devoid of saliva for days. Mid you, the potato was fine. As for dessert, the cake was so plain that it was impossible to form an opinion on it.

Honestly, I didn’t really enjoy it, but I had paid for it and hadn’t bought anything else so tried to eat as much as possible. 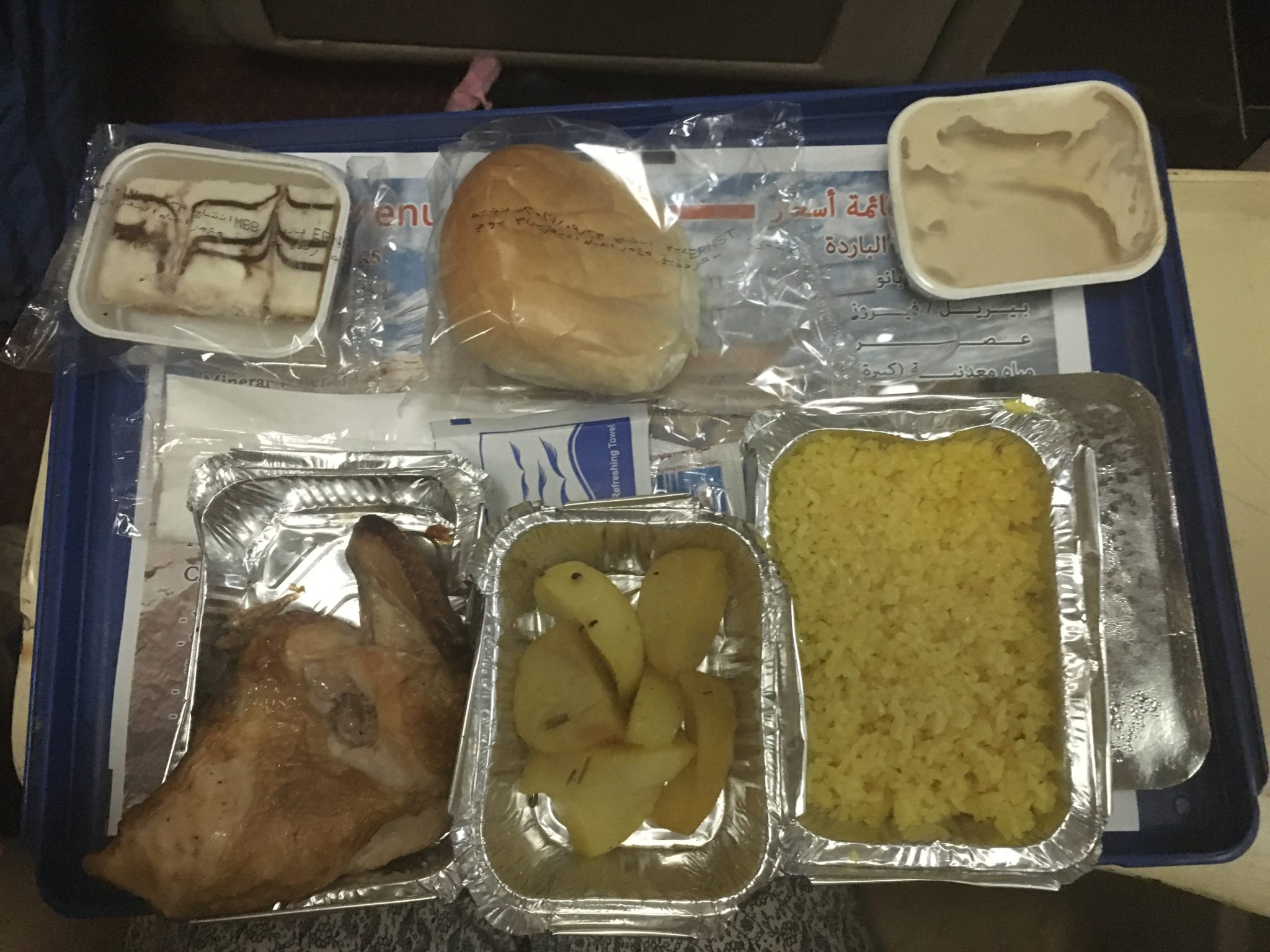 Bedtime – Trying to Sleep on the Egyptian Night Train

The guard returned to remove the dinner things, and then once again to make up our beds. The bottom seat became one bunk, and the shiny bit of the wall was folded out to make a top bunk. The pillows were great so there was no need to dig our own ones out.

Now I love taking night trains, but you are never going to get a wonderful night’s sleep. You will save on the price of a hotel room, and get from A to B. You may well need a nap the following day to make it through. The best thing about this though, is being party to some lovely sunrises. They call the hour after sunrise, the golden hour, and as the world slips passed your window, you can see why. Shadows create gorgeous contrasts and the world is bathed in a light that is far less stark than the blazing African midday sun.

Breakfast was a continental breakfast of sorts. If you like bread, you’ll love this! Staying in budget accommodation, we were used to these finger rolls for breakfast, it’s fuel more than delicious food. The coffee was pretty good but the cakes were all quite dry.

Arriving in Cairo on the Night Train

I’m not really sure what happened next. The guard knocked on our door saying, “Cairo” so we gathered our backpacks and jumped out into the morning sunshine. I was a bit confused because it was quite quiet and there didn’t seem to be a terminus-style building. 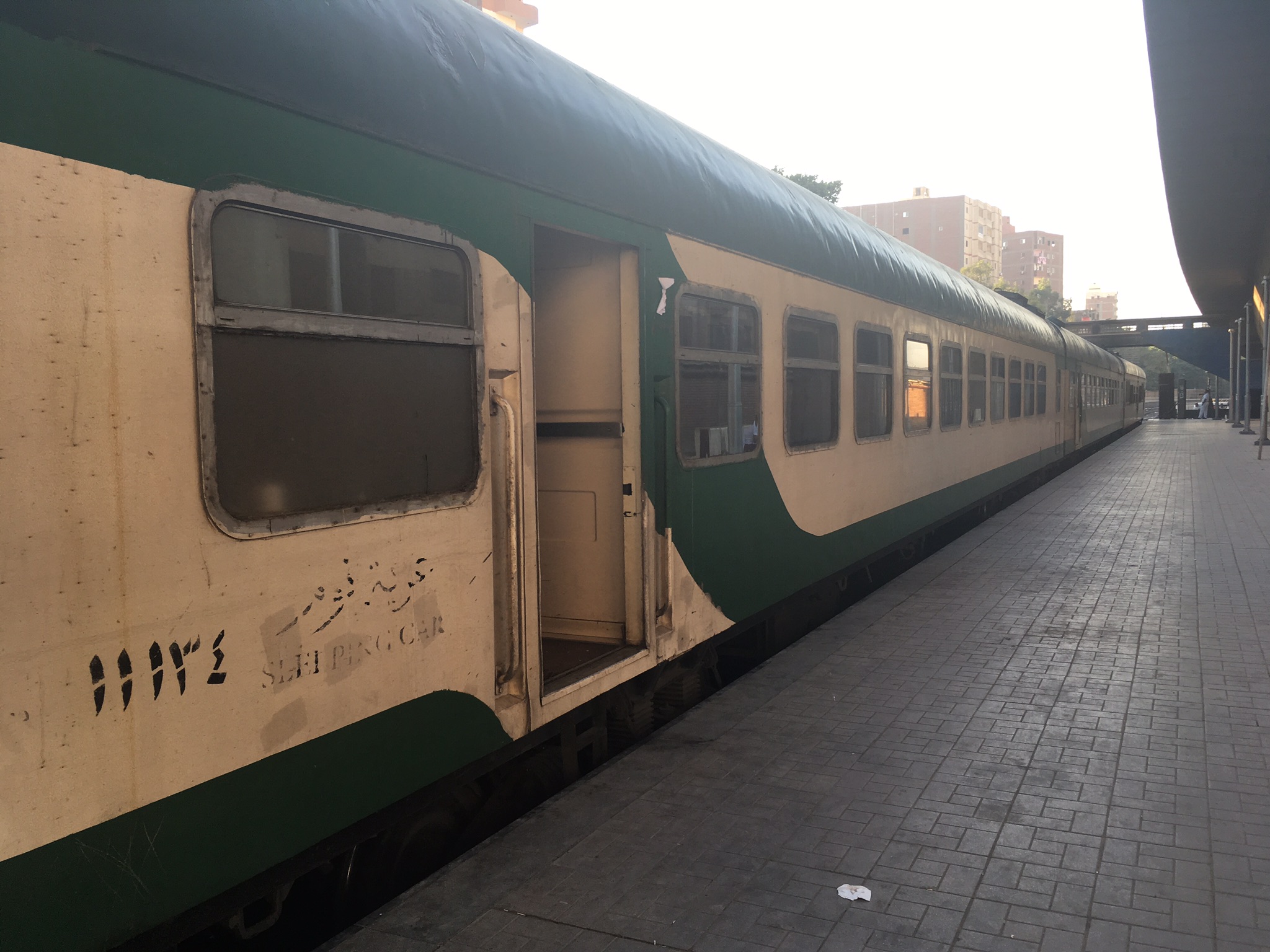 We walked along the platform and just as we realised we had actually disembarked at Giza (GIZA!!!!?) the train moved off.

Cue the short argument of frustration.

Thankfully we spotted a sign that told us the Giza Metro was just next door, and so we quickly made for the train to take us the rest of the way into Cairo. 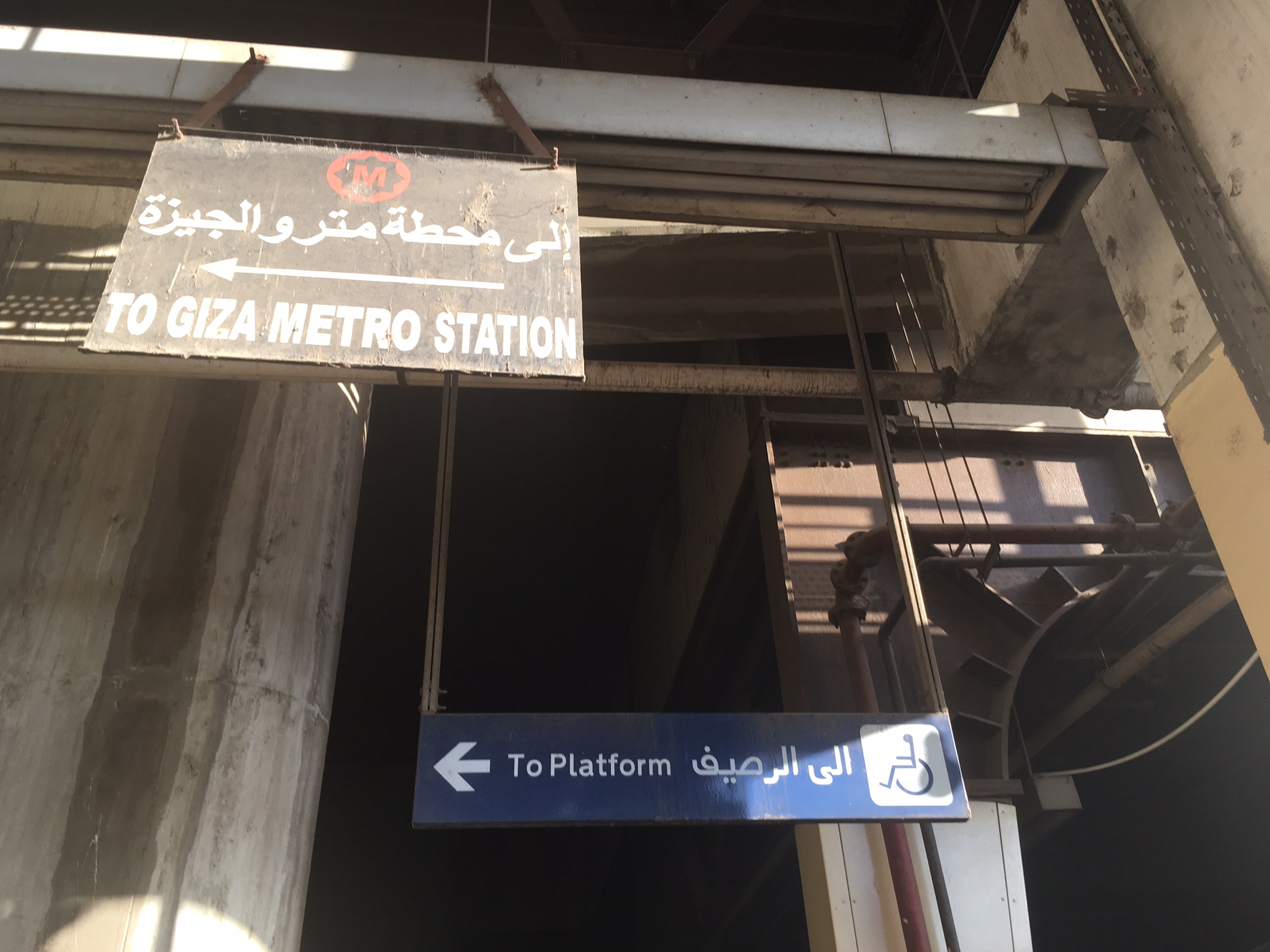 I slightly blame the guard, but most likely it was our general lack of decent sleep that caused the mistake. At least it was easy enough to correct.

Check out 8.5 Reasons You Will Love Backpacking in Egypt

Final Thoughts on the Luxor to Cairo Night Train

We really enjoyed our night train journey from Luxor to Cairo and would heartily recommend it to those of you who fancy a little adventure on your Egyptian trip. If you think it is something you would like to do, here are some tips for you: 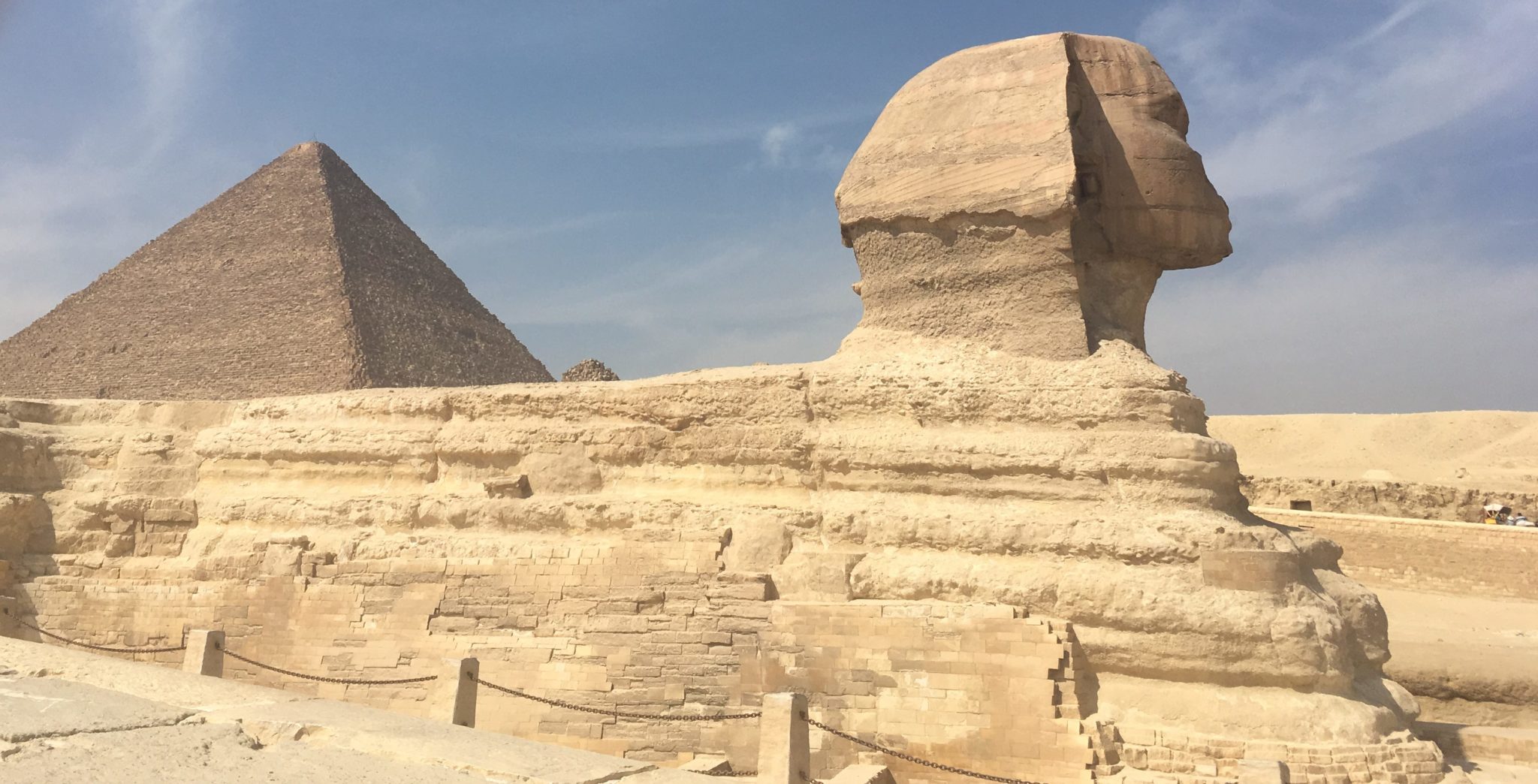