Well, we couldn’t come all this way and not see St Petersburg could we!? The very last and final train journey of our Trans-Siberian travels was travelling from Moscow to St Petersburg by train. There are two options for this route, the sleeper or the fancy new high-speed link. As nice as taking a last sleeper would have been, it would have completely rinsed our time in St Petersburg, so we opted for the modern speedy train. 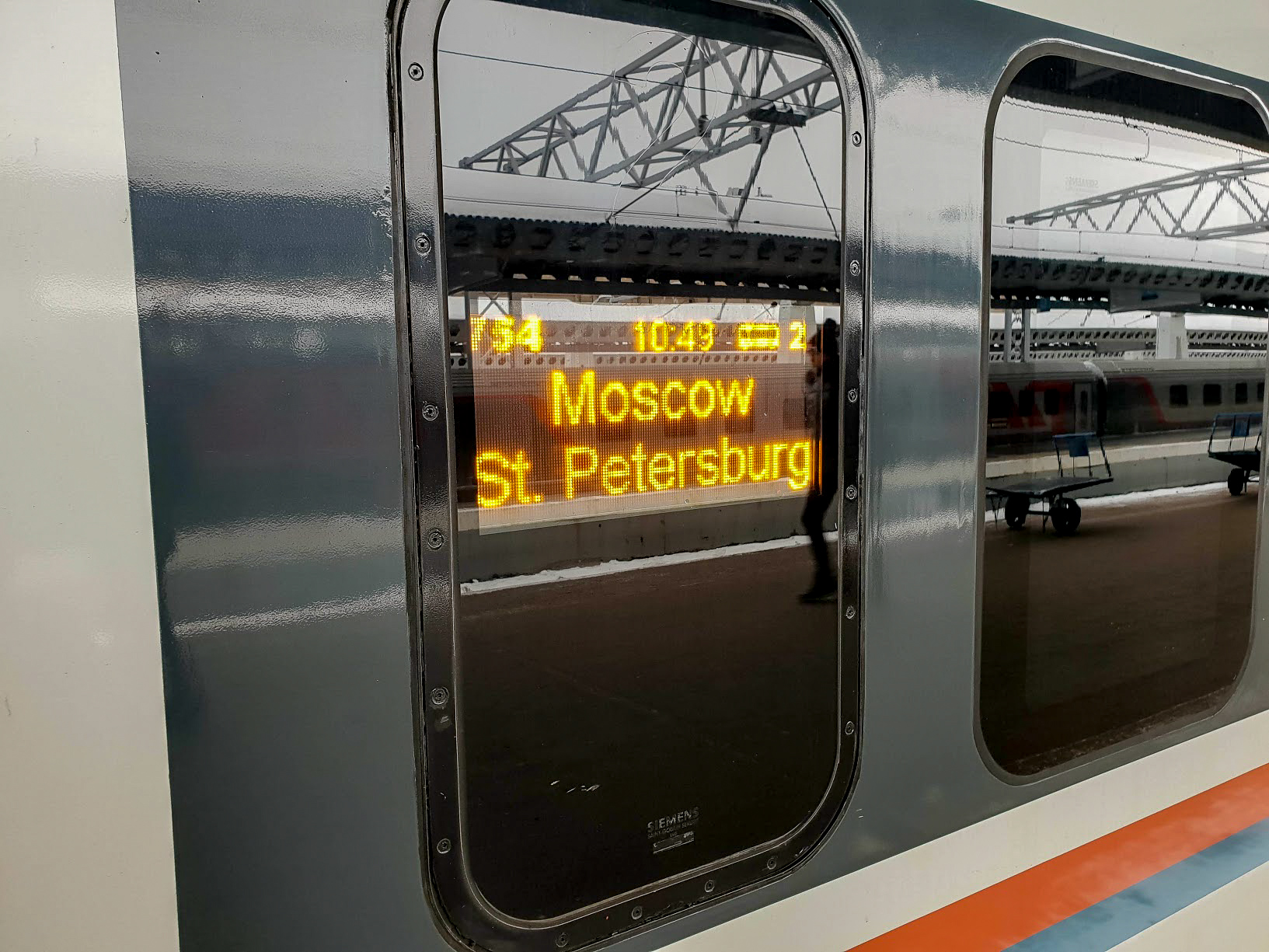 Check out our guide to spending two days in Moscow.

It was another very early morning (isn’t it funny that we accept those on holiday) to catch our final train. Our first section of the journey, two weeks earlier, felt all at once a distant memory and just yesterday. The sun was yet to rise as we ascended out of Moscow’s beautiful Metro. 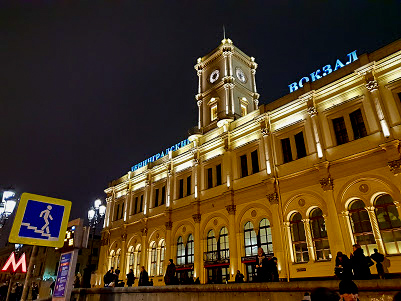 It was definitely coffee o’clock, so I kept a bleary eye out for a coffee shop. Moscow is crazy for кофе (coffee) and so we found a great place almost straight away. There’s nothing like the caffeine kick of roasted beans, mixed with the greasy elegance of a pastry, to start the day off right. Clutching my paper cup, we carried on down the long departures hall. 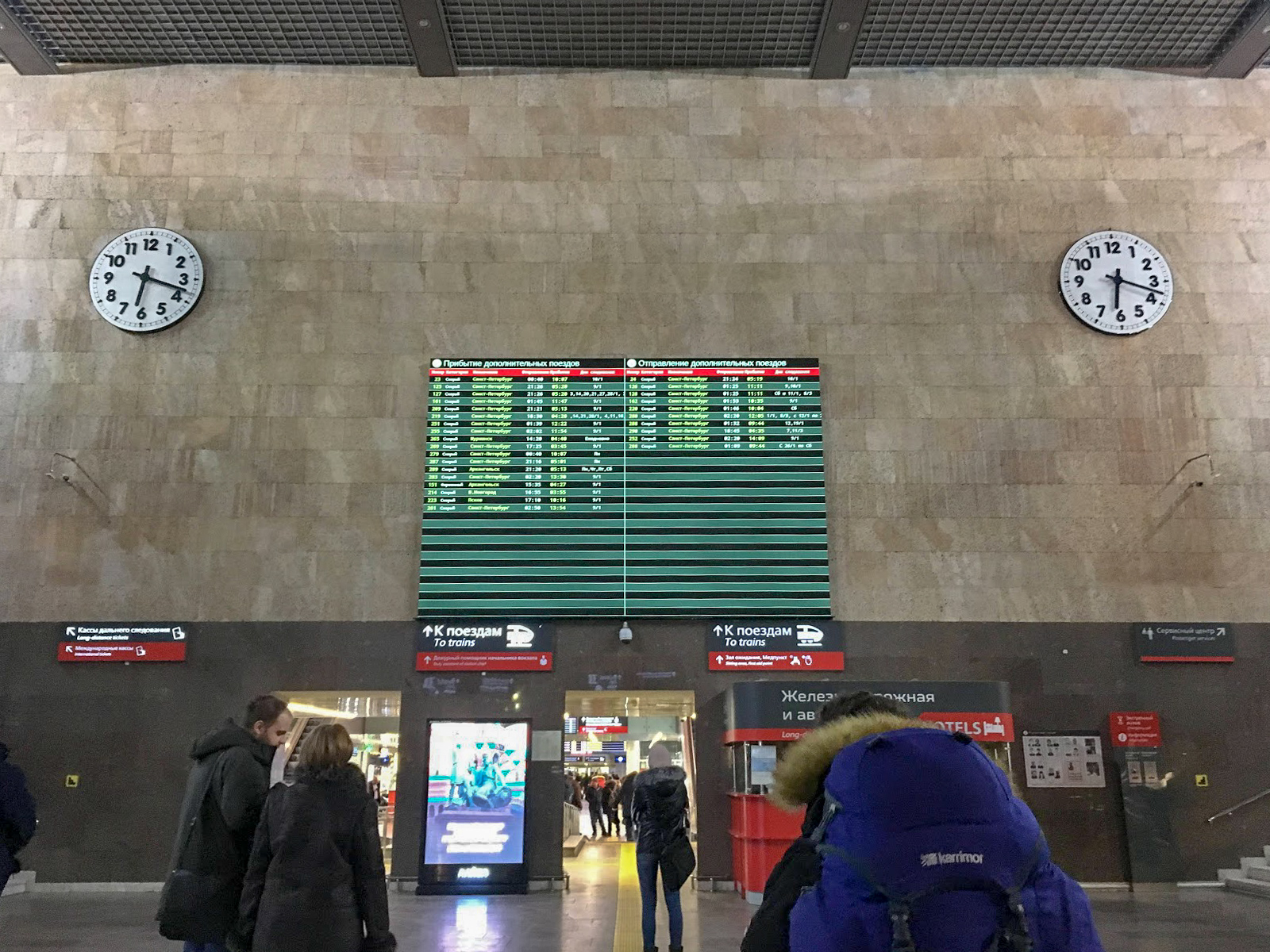 Boarding the Train to St Petersburg

The train, a sleek red and grey beast sat flush to the platform. It was a relief to see that we weren’t going to do another backpack hoist up freezing metal steps. 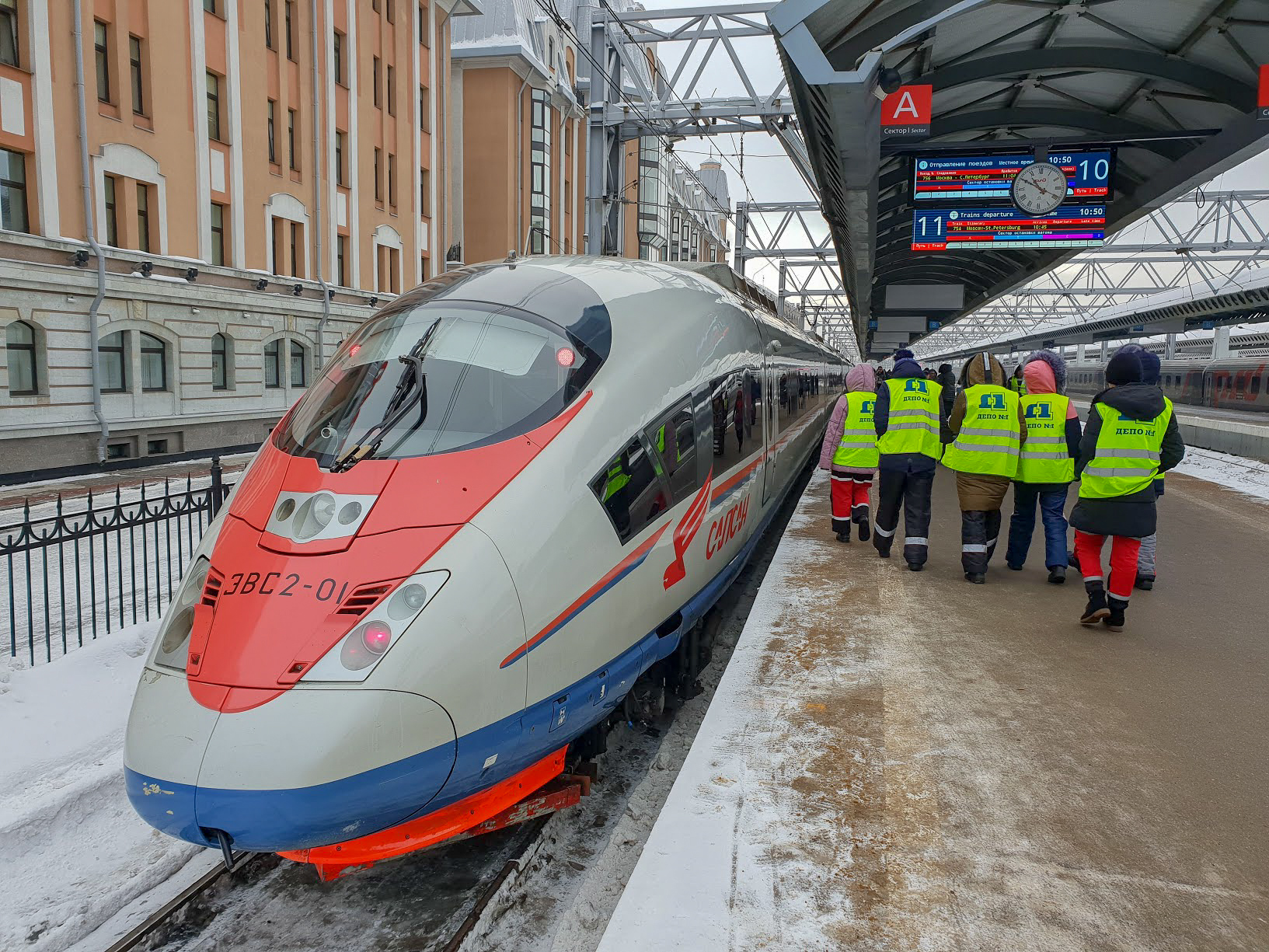 No friendly babushkas welcomed us, instead, the staff were all young, pretty females. I wonder if is the Russian Railways attempt to attract people to their premier route. Our tickets were checked and we boarded, leaving the Moscow chill behind on the platform, grey with cloudy dawn.

On Board the Train from Moscow to St Petersburg

The train interior was pristine, it was like a first-class European train. The airline-style seats were punctuated by tables of four. Every passenger was given a pack of earplugs, enhancing the plane-like feeling. It seemed so futuristic after the blunt-ended sleepers that we were now accustomed to.

One touch that I thought was really nice, was the coat rack. In the centre of each carriage, there was a section for everyone to hang their winter gear. It meant that every passenger was sat in just a little more comfort especially if their outer where was dusted with snow or rain. How thoughtful! 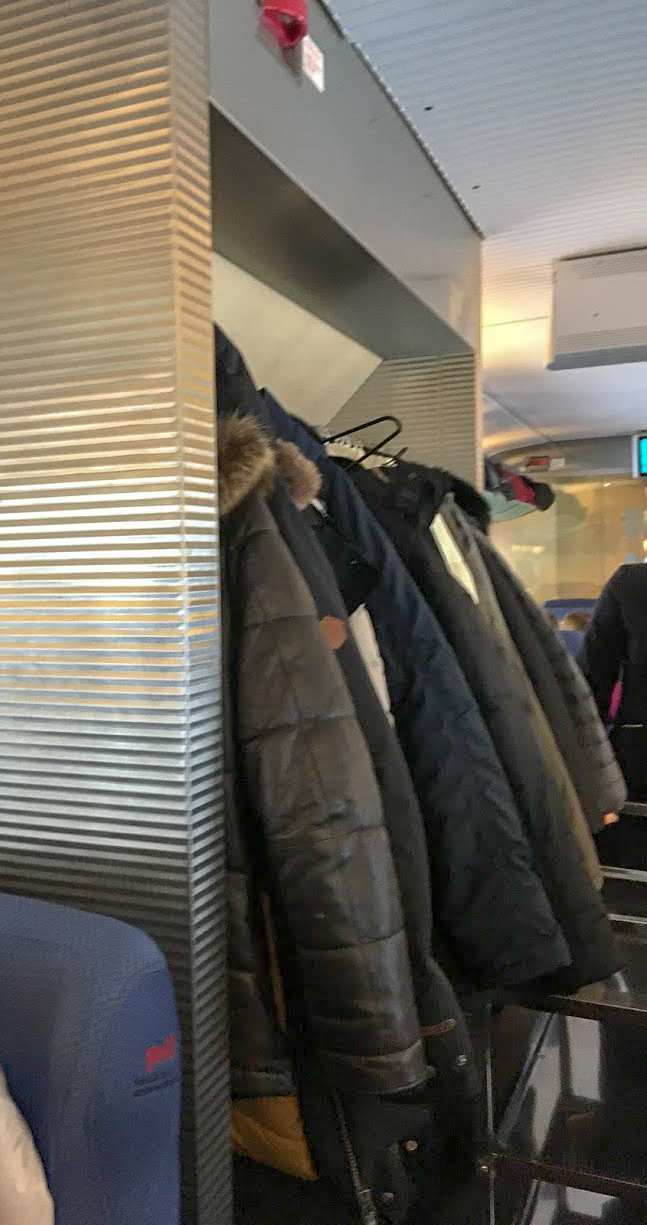 As fancy as this new train was, I missed the slow pace and relaxed feel of its ancient cousins. It was hard to enjoy the scenery and I hate sitting like a grown-up. I was longing to put my feet up on the seat like I had on my bed but obviously that wasn’t okay.

The bathroom, however, was a vast improvement. I didn’t have to worry that I was going to leave bits of bottom stuck to the seat and I couldn’t see the frozen tracks rushing below me. Not having a draft up your lady bits is somewhat of a luxury, so I was glad to see the back of the drop toilets.

The scenery skimmed by a terrific rate. It was next to impossible to take photos as they just came out horribly blurry. The landscape had some of the forests we had been so used to in Siberia but was much more urban. Low rise brick or wooden buildings ran perpendicular to the tracks and snow coated the roads that ran alongside them.

Our Sneaky Nap and Arrival in St Petersburg

After the early start we both fell asleep in our chairs and in about 14 winks (no time for the full 40) we were starting to slow down on our approach to St Petersburg. 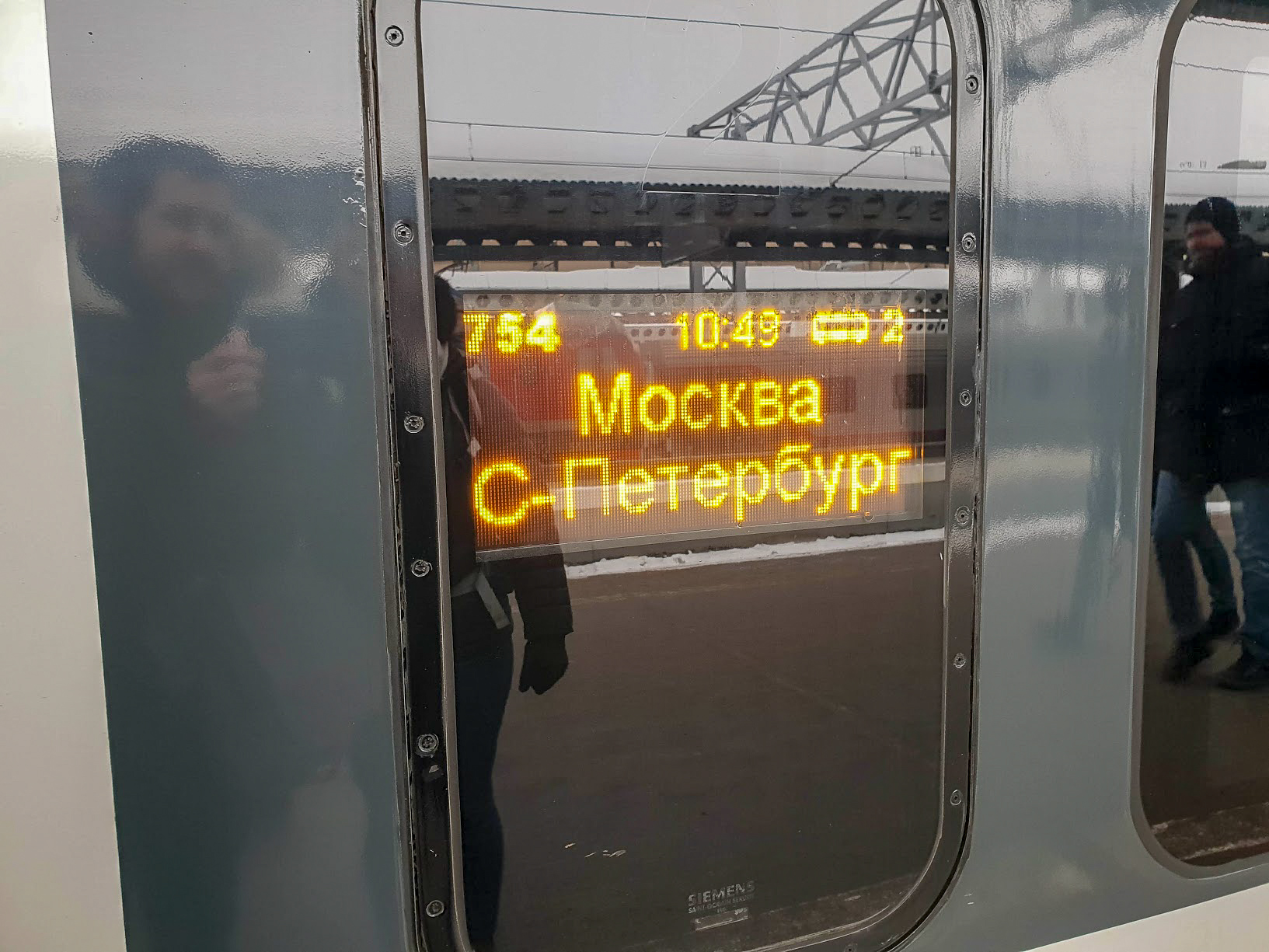 It was a bit of an anti-climax. Nobody had arrived with flags, no confetti rained from the sky and there was not a fanfare to be heard. Instead we explored the station and then emerged into a busy city, filthy and slippery with a mixture of sand and snow, until a massive sense of achievement washed over me.

Final Thoughts on Travelling from Moscow to St Petersburg by Train

If you were only planning to travel this one stretch of track within Russia then we highly recommend taking the sleeper train. It is an experience not to be missed. However, as part of a bigger trip taking the High speed rail is a good option. It gets you from a to be in comfort and warmth but you do miss the chance to take in the view, stop and reflect a while.

We got to spend a rather brief 28 hours in St Petersburg and then, just like that, it was over. Time had gone so quickly on this massive trip. Somehow, even a 58-hour train journey had slipped by almost without notice…although the Champansky may have had something to do with it.