We get rather excited by small things here at Flying Fluskey and taking a short-haul flight on a long haul carrier is one of them! The chance to fly Turkish Airlines from London to Istanbul was just such a chance, and we jumped at it. Read on to see our full review of Turkish Airlines Boeing 777-300 economy from London Heathrow to Istanbul Airport. 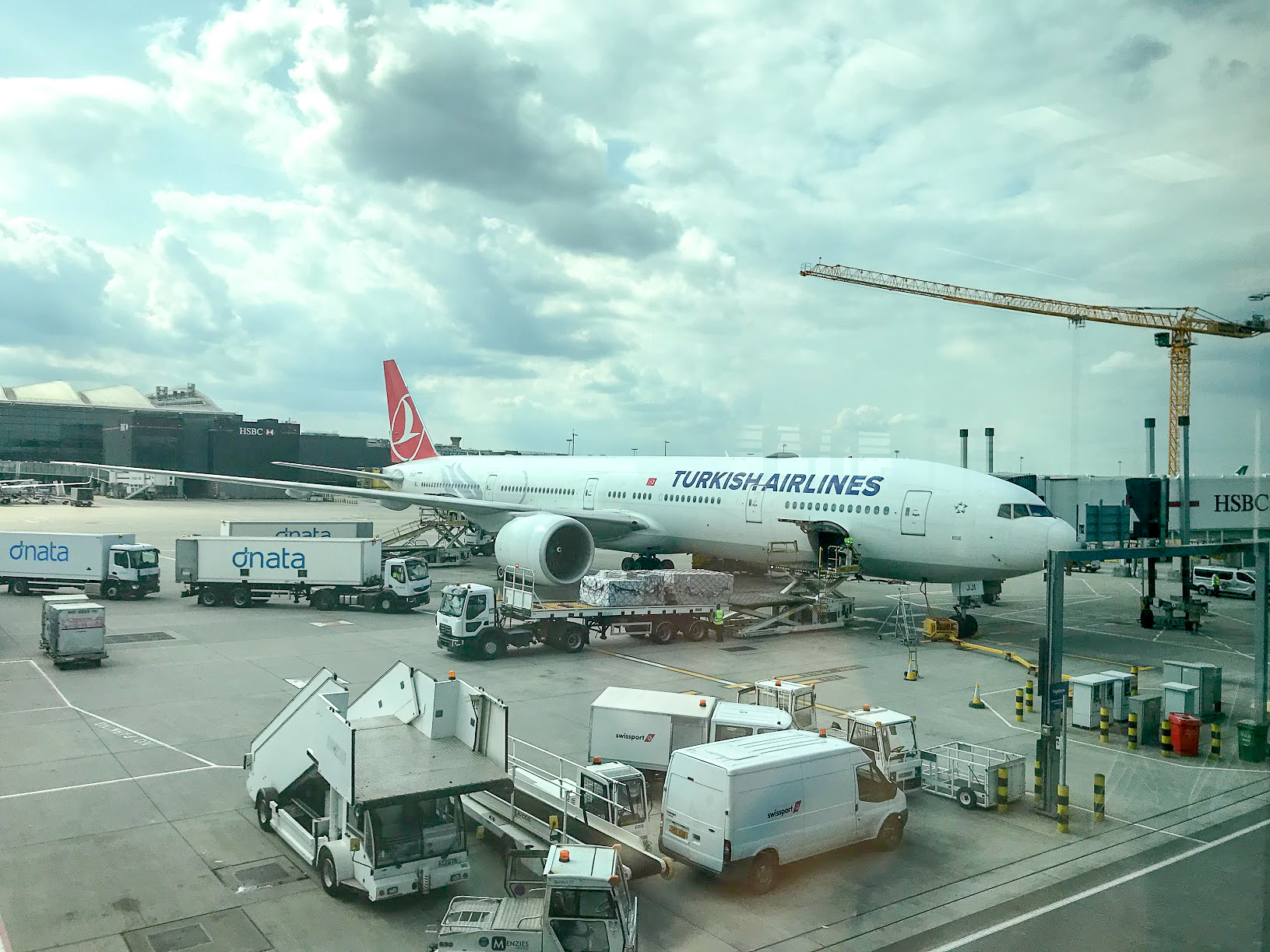 Turkish Airlines flies from Heathrow Terminal 2 (the Queen’s Terminal) zone A. This was fully renovated just a few years ago and the initial impressions of the building are good. It is light, airy and has a nice simple layout. 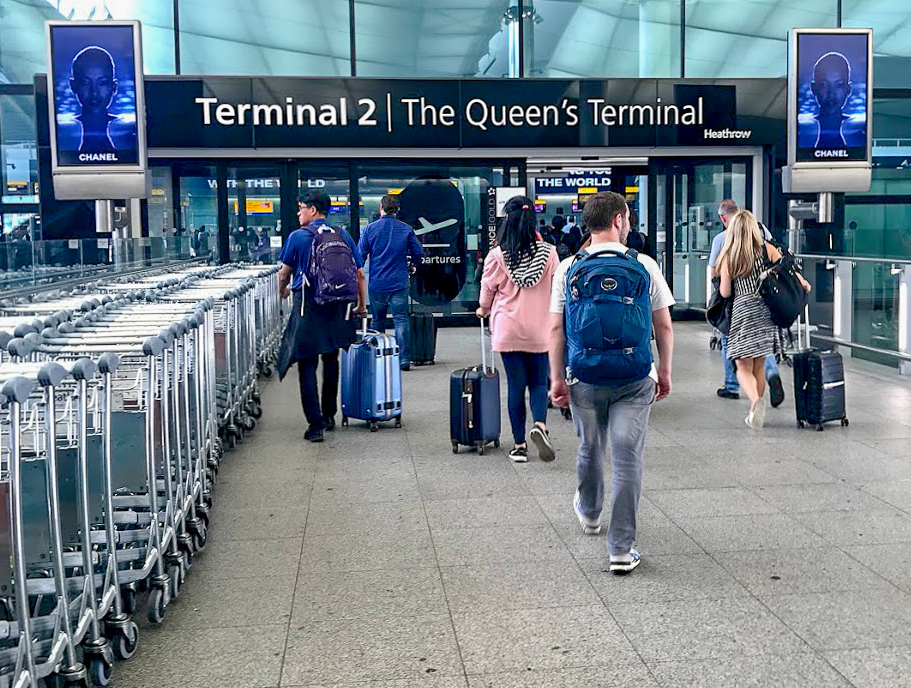 Plus, just beyond security is The Perfectionist’ Cafe. Any excuse to have a Heston Blumenthal cocktail is a very good thing! This one was a lychee martini with a jasmine air…fun and delicious! 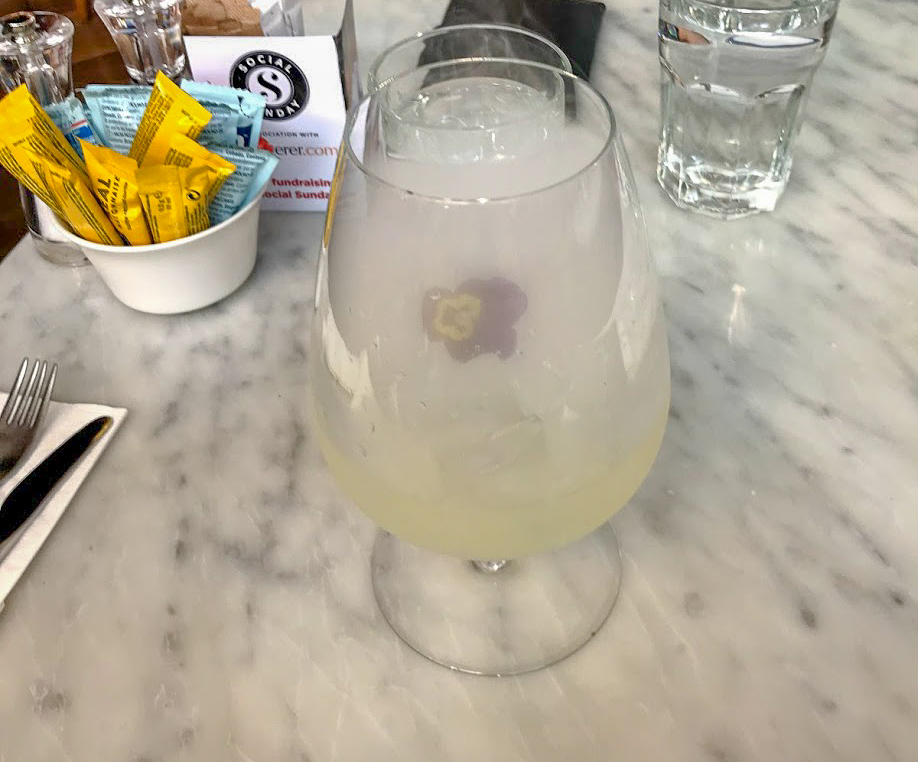 The check-in area is fronted by self check-in machines. These were simple enough to use and if you have just hand luggage, you can bypass the check in desk altogether. We had two single tickets so had to go to the desk to complete our check in process. The staff member was perfectly pleasant and wished us on our way. 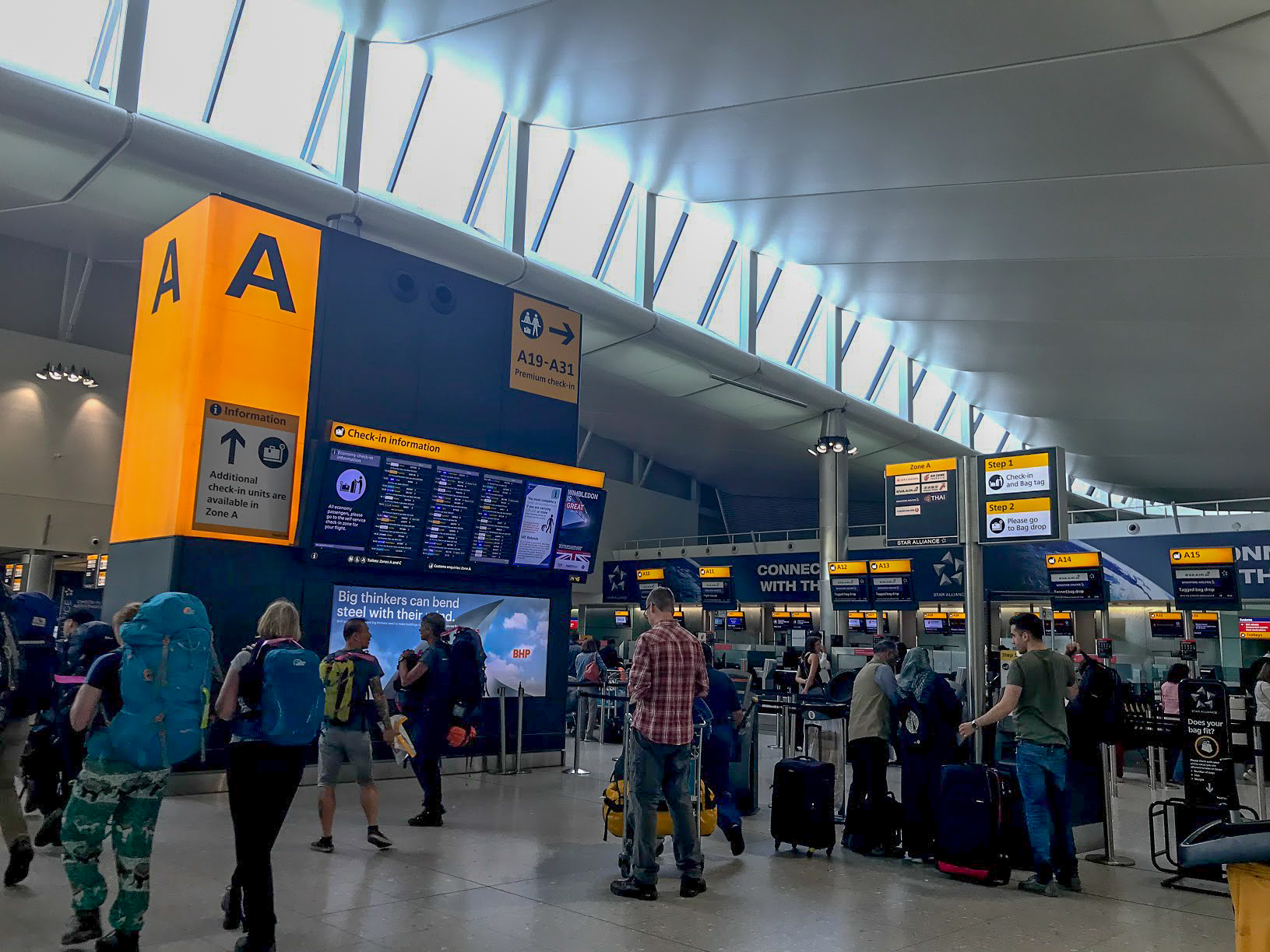 The gate was announced and it was with a sinking stomach we saw that it was departing from the B gates. These are a long walk away from the shopping area in the terminal, especially with a backpack on. It too a good ten minutes to get the gate at a steady clip.

The queuing system at the gate seemed quite chaotic, more of a scrum than a queue. It turned out that the first bit was just to enter the queuing area. It really wasn’t a relaxing way to start a flight.

It was quite a nice cabin which was light enough, but with oddly yellow lights. It reminded me of seeing those old orange streetlamps when compared with the white LED kind. Weirdly, the red and grey colour scheme reminded me of school uniforms. 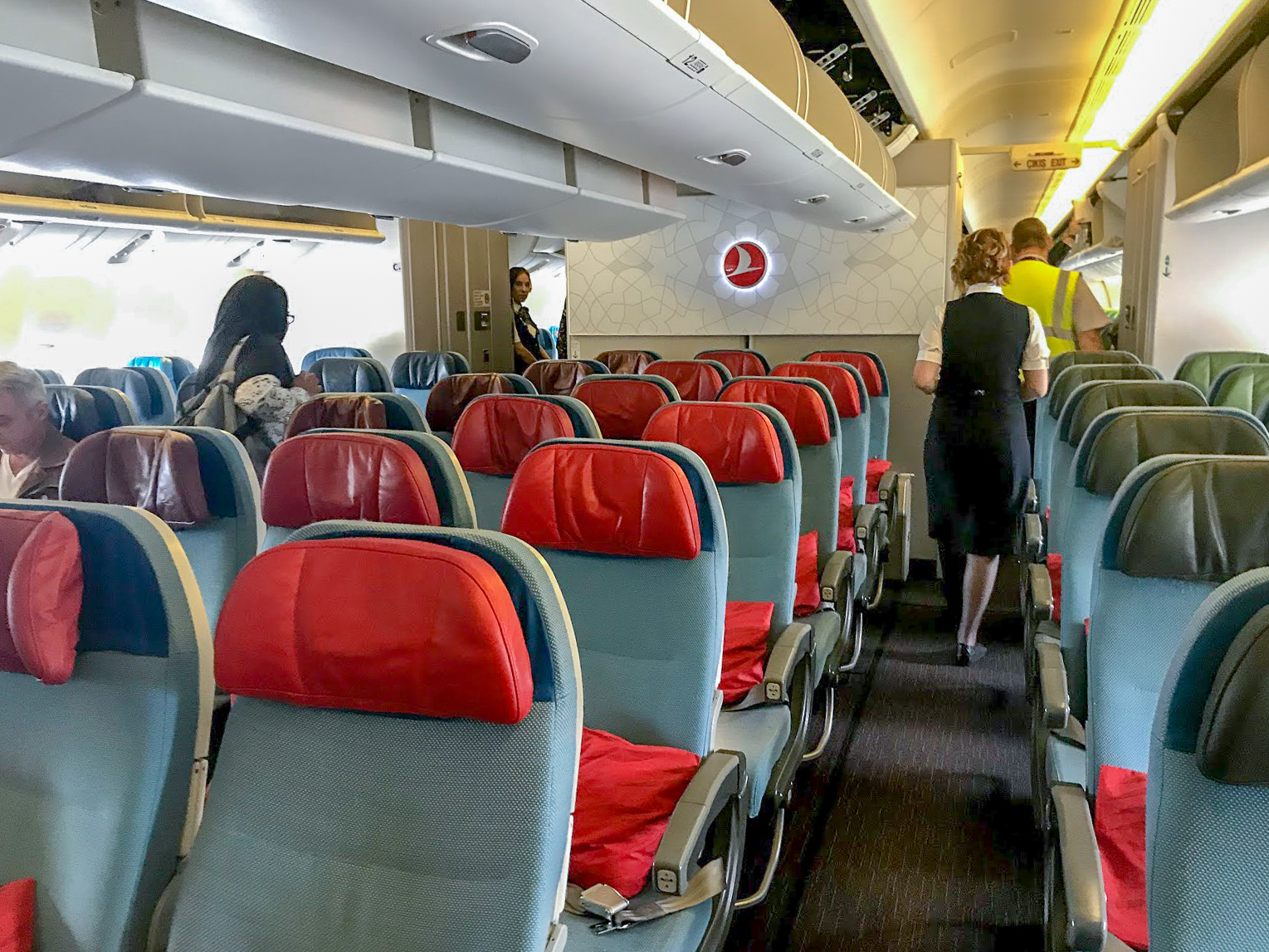 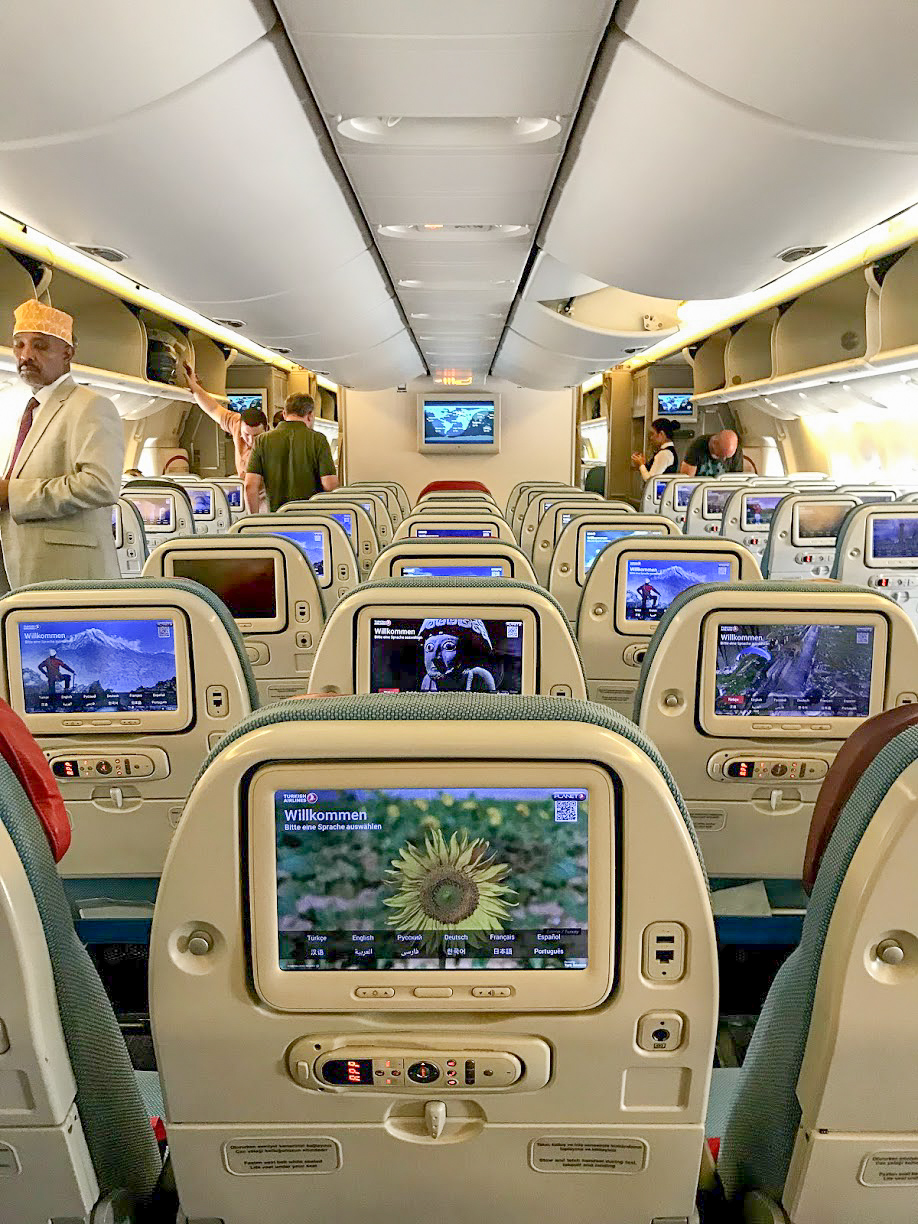 The overhead lockers in the middle weren’t that big, so we had to use the side bins. People sat in these seats were unimpressed but we didn’t have a lot of choice. If you are travelling with a piece of larger hand luggage, you will want to board as early as possible to ensure you have space for your bags.

The seating configuration for most of the Turkish Airways economy cabin was 3-3-3 and we all know how I feel about that. (I hate it, just in case you didn’t already know).

The adjustable headrests were great, providing great support. I couldn’t quite tuck the pillow in to use both for sleeping, but I still appreciated both greatly! (excuse my not-enough-sleep face).

The seat pitch is a pretty standard 32 inches, with a width of 18 inches. It feels reasonable, but the best thing is the foot rest. This is a feature usually only seen in premium economy so it was VERY welcome.

The tray was extremely standard, nothing to report there.

The seatback pocket contained the inflight magazine, duty free catalogue, safety card and a sick bag. There was plenty of room to stash other things though.

The seatbacks had ethernet and USB connectors. We didn’t really need a USB for a five-hour flight but if I was travelling long haul with Turkish Airlines, this would be a godsend! 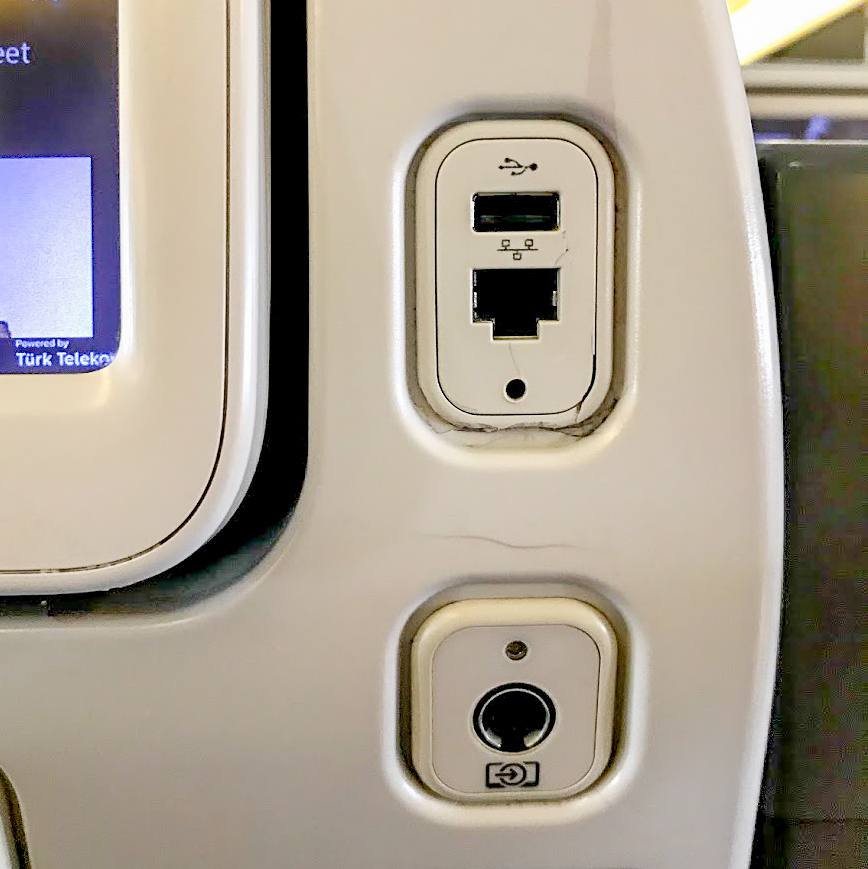 However, the plug for your headphones was in the armrest. This is a terrible design and means it is constantly knocked, tugged and wrenched out. Plus, the connector was one of the two-prong variety so if you have your own headphones (and you won’t want to use the ones provided) and no adaptor, you have to jiggle it and have it partly hanging out to get decent sound….sigh. 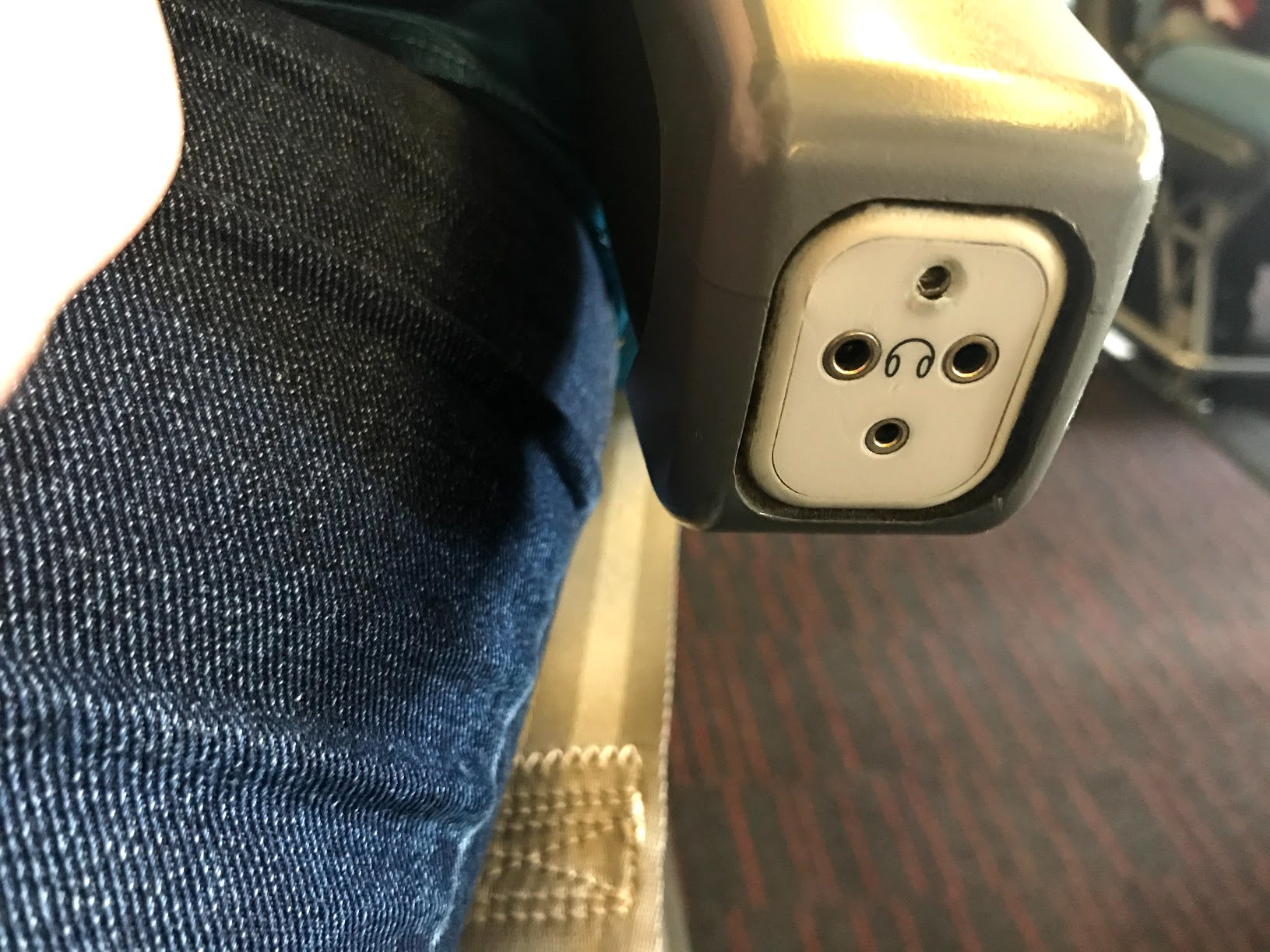 II wasn’t prepared for just how awesome the safety video was, and I use the word awesome for good reason. If you have seen the Lego Movie, you are going just as captivated as we were. Here is a sneak peek:

The Turkish Airline’s entertainment system had a great selection of films. There were lots of recent films and some classics as well. I was also impressed with the number of world cinema movies, with a great choice from across the globe.

Along with films, there is a huge music playlist, TV, games and audiobooks. I spent the whole flight catching up Modern Family and The Goldbergs. Being sleepy, I didn’t fancy a film.

The headphones were a disappointment. I was excited to see that they were in-ear buds but my pair didn’t work and Mr Fluskey’s were very poor quality. 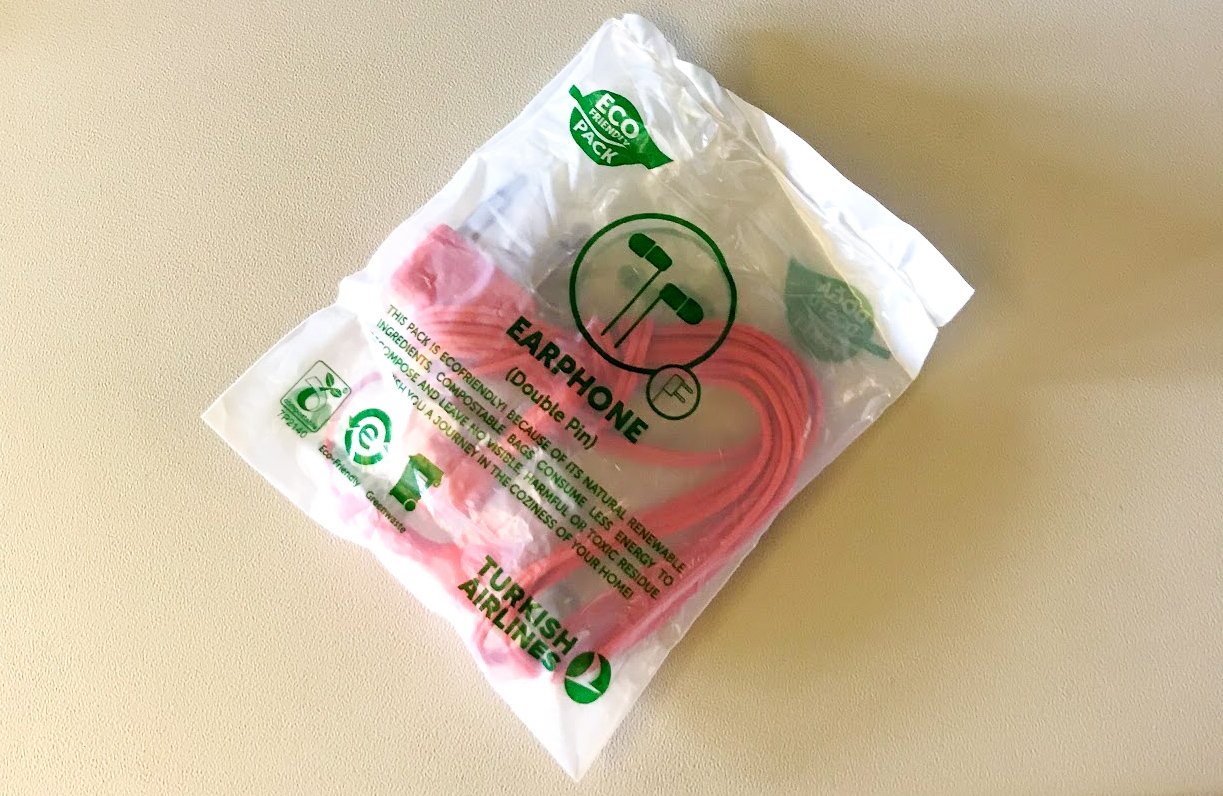 The inflight magazine was the usual blend of adverts, travel articles and airline information. I can imagine reading it on a long haul flight but I wasn’t in the mood on this short hop. 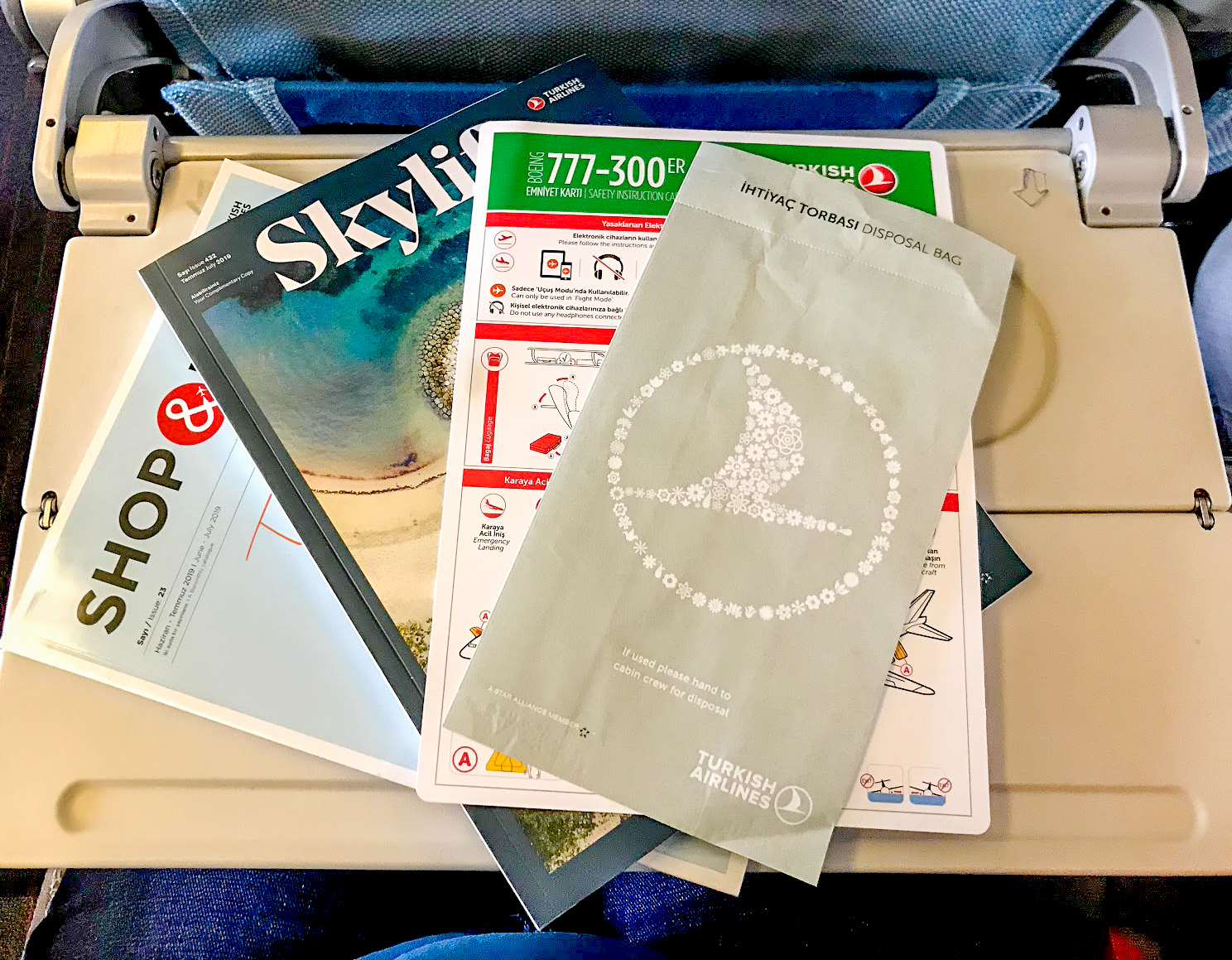 On arrival, our seats had a thin blanket, pillow and headphones on them. The blanket didn’t feel like it would be warm but it was impressively so. We loved how good the pillows were, much more like a premium product.

We weren’t given any kind of amenity kit beyond the headphones. This was unsurprising considering it wasn’t a very long flight.

In the bathrooms, I was pleased to find a very nice unisex fragrance and hand cream. Again, this is a nice little extra that you normally wouldn’t find in economy. 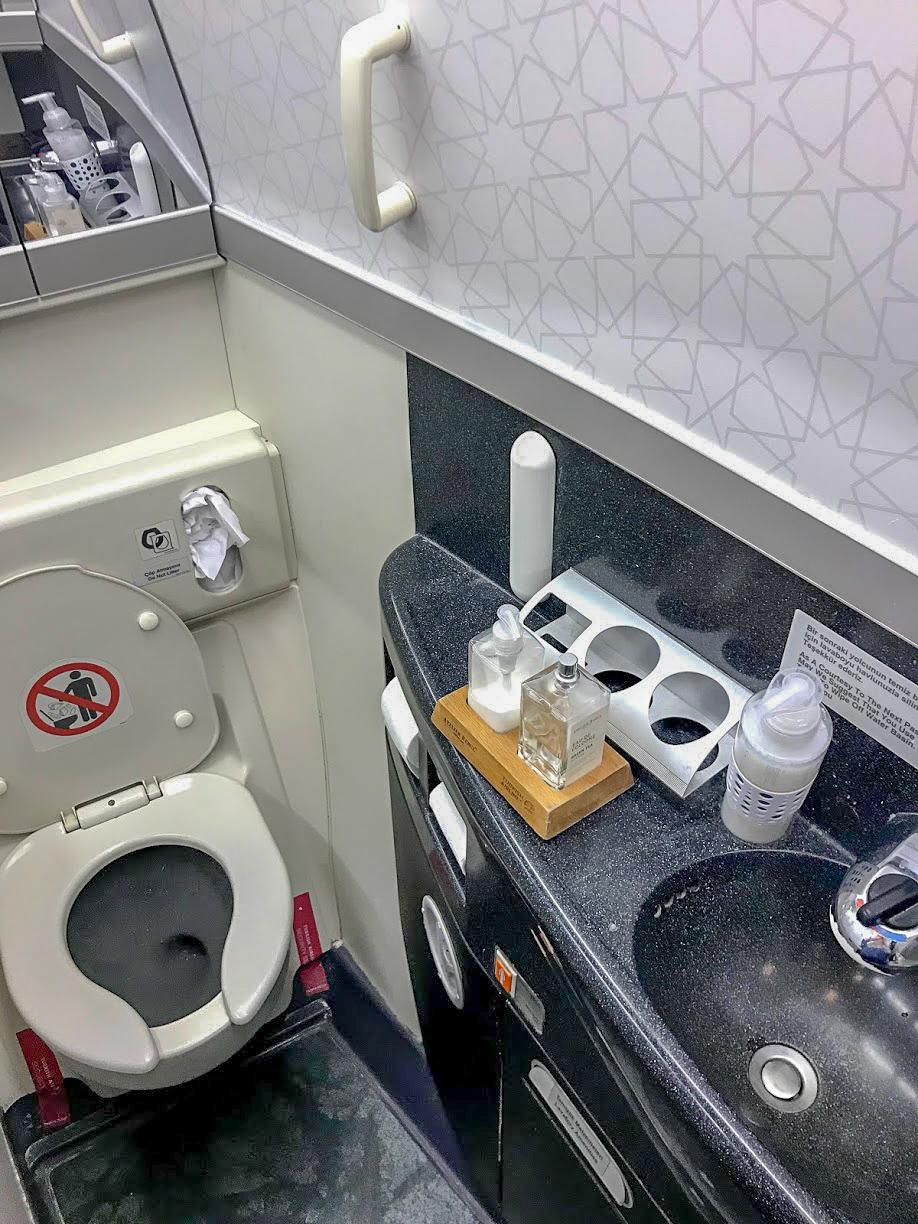 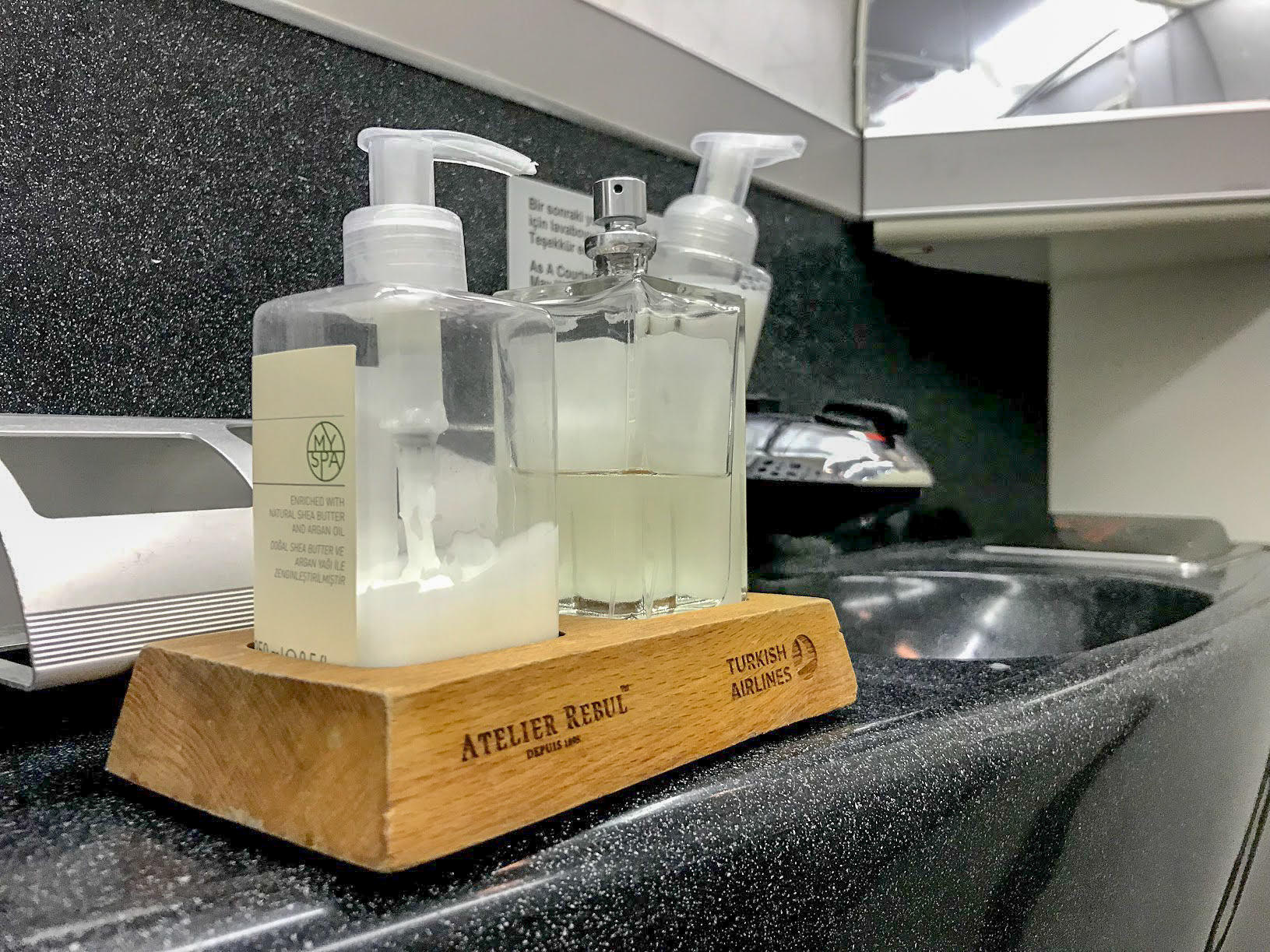 Being a long haul carrier, I was excited to see what the meal service would be like. We were served one meal during our five-hour flight.  This was dinner as it was late afternoon in the UK by this time.

We weren’t given menus ahead of time so for safety, I opted for the pasta main dish and this came with a few bits around the sides of the tray. 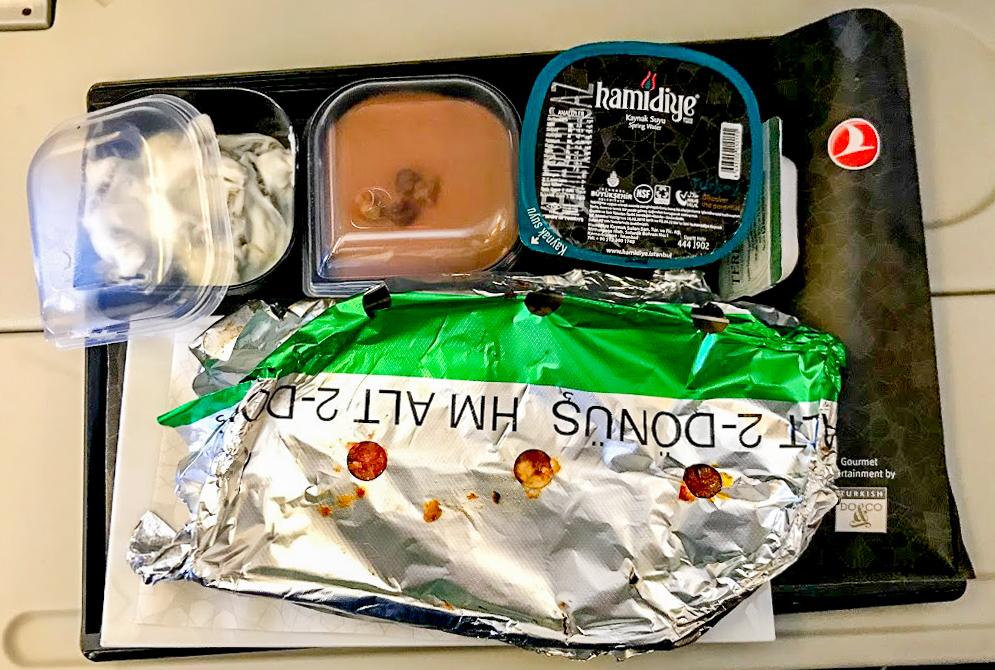 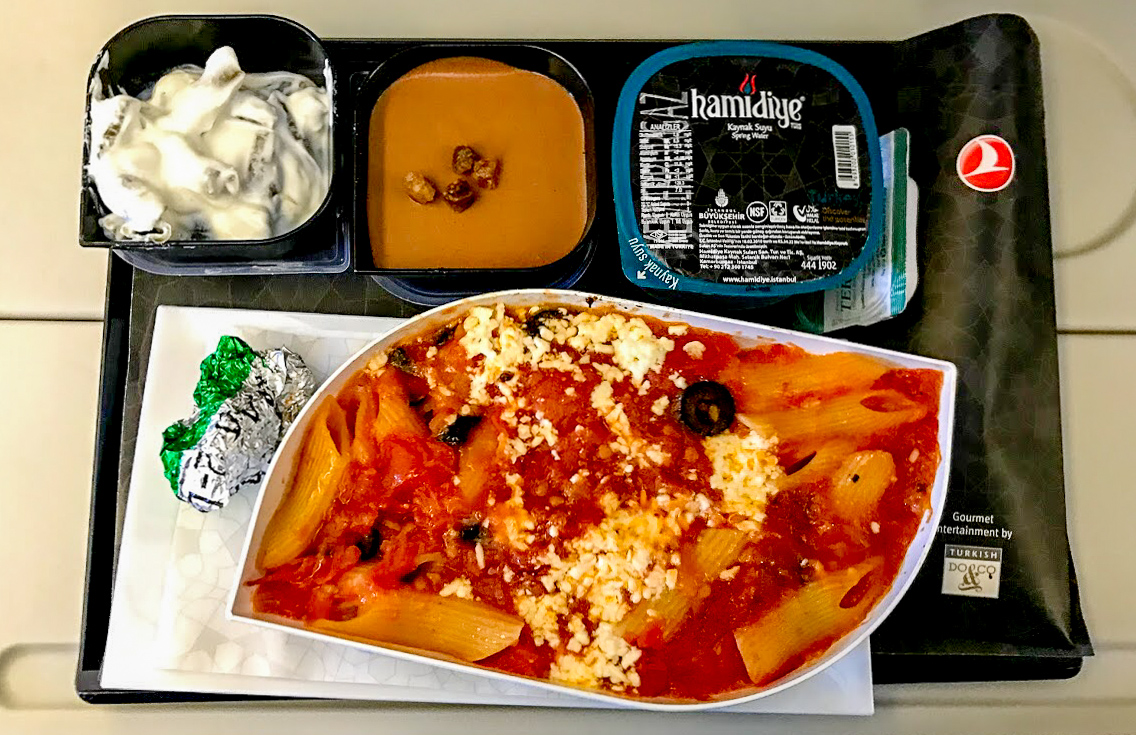 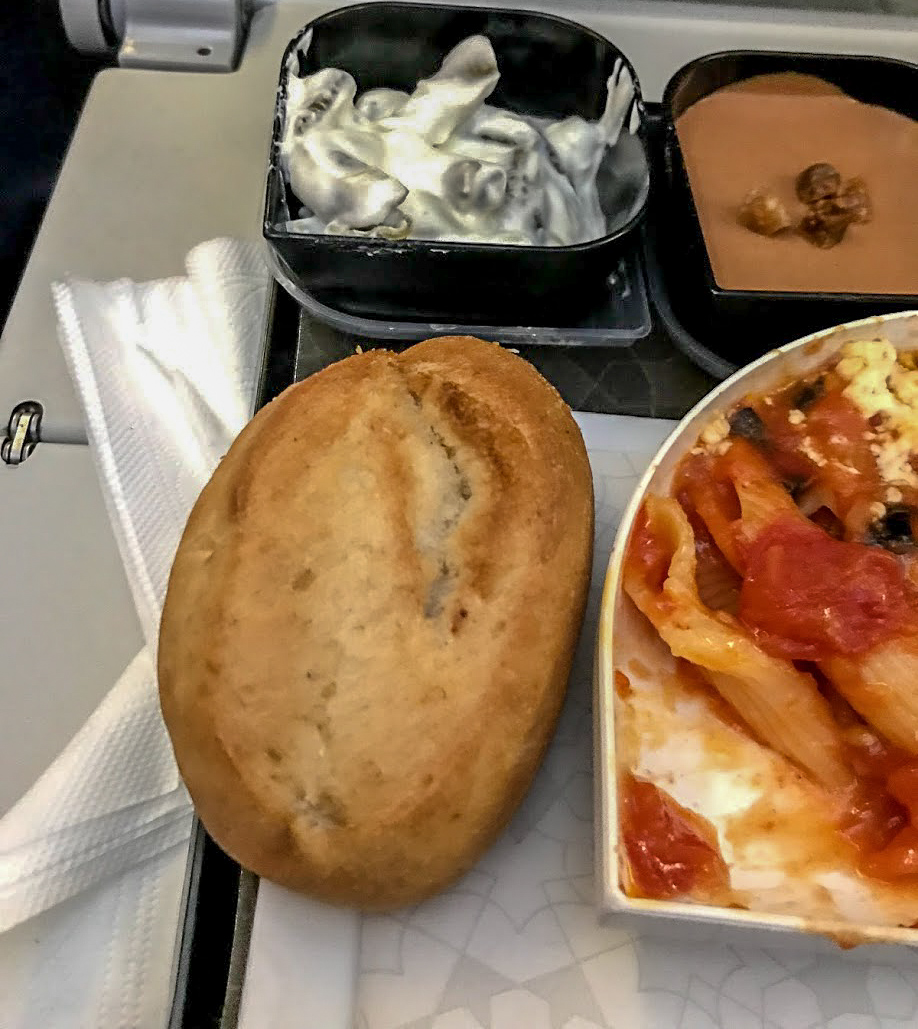 I thought this Turkish Airlines economy flight was excellent. The cabin crew were a little curt but the amenities, entertainment choice and seats were excellent. Big bonus points for the tasty bread roll, footrest and USB plugs in the seats. However, I would recommend bringing an adapter for your headphones to get a truly relaxing entertainment experience. 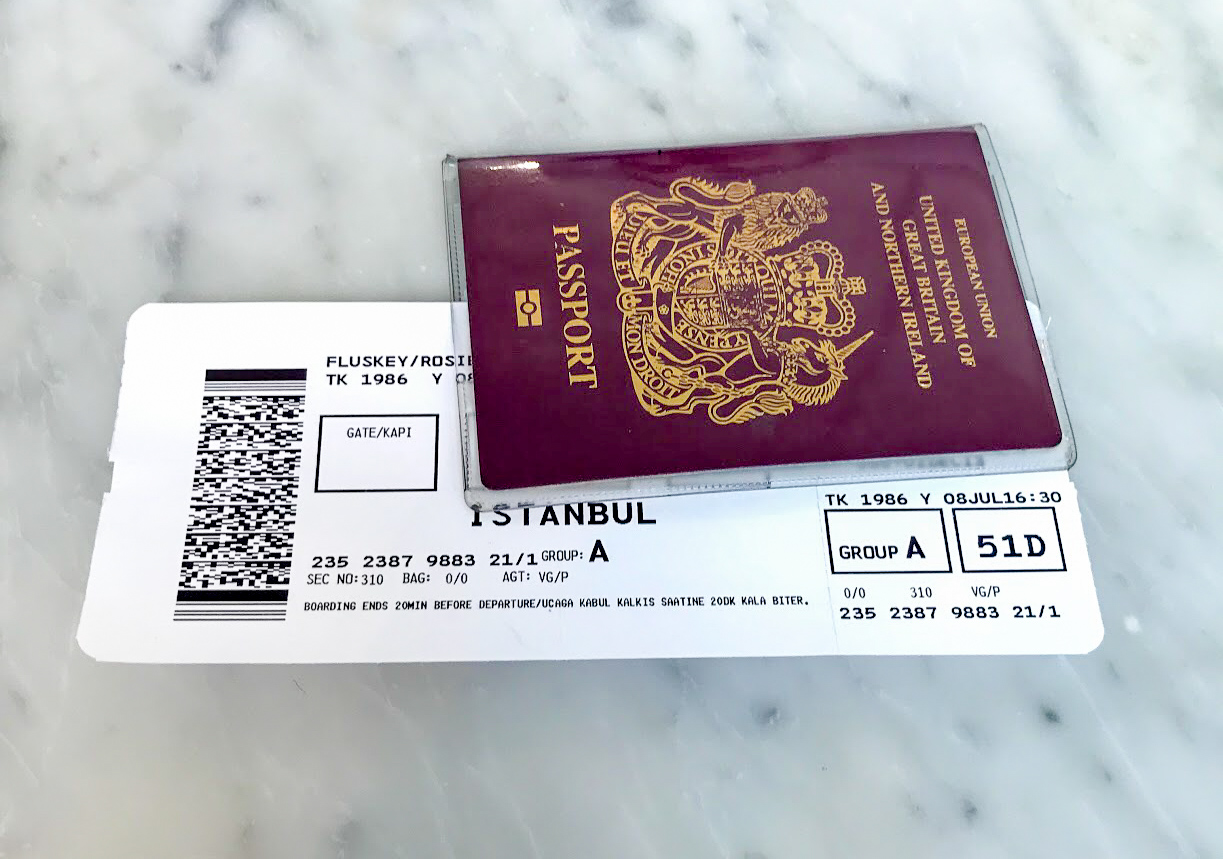 I would be very happy to travel long-haul in Turkish Airlines economy and to recommend them a great choice when travelling between London and Istanbul. 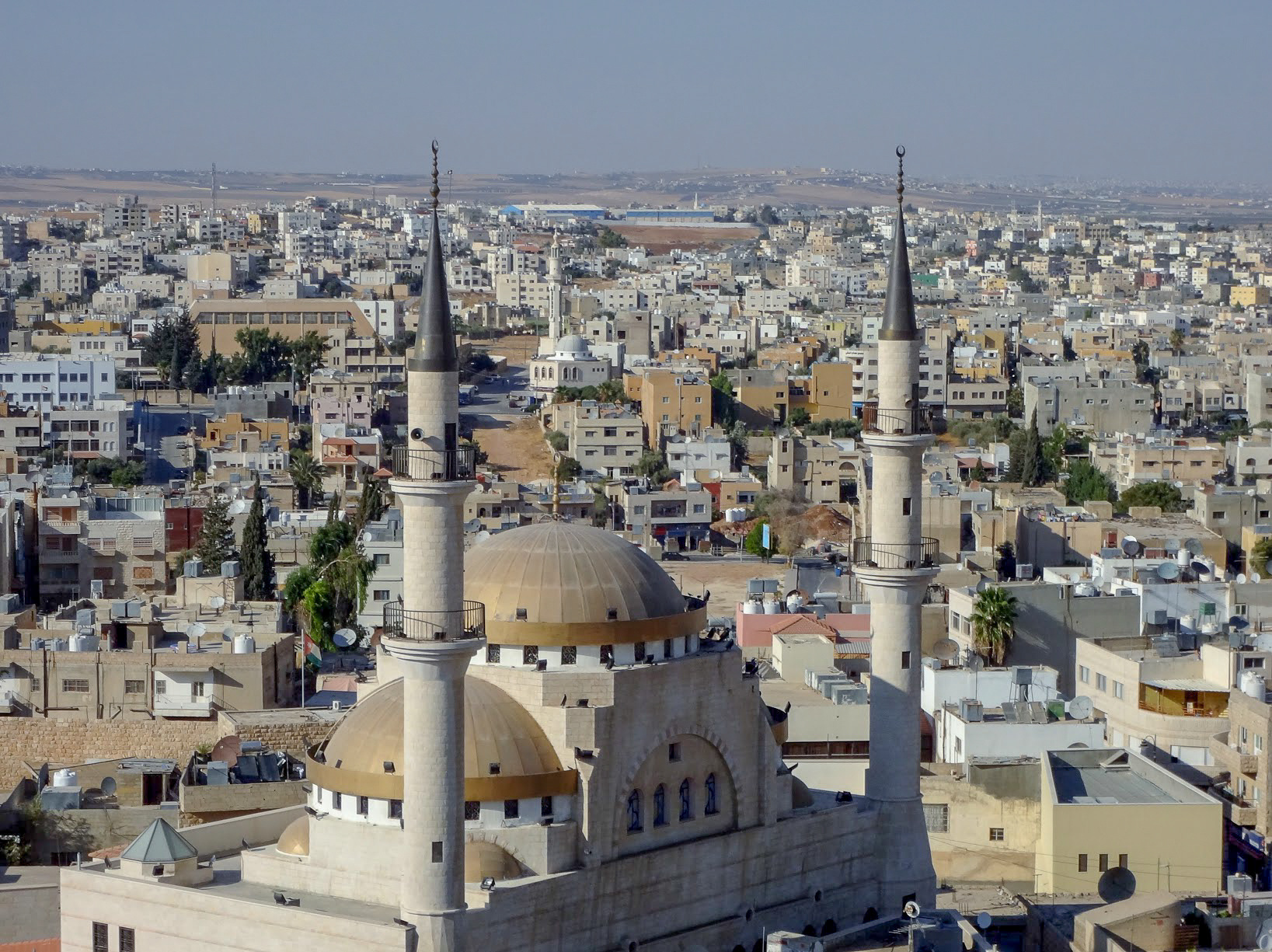