In August 2019, we were lucky enough to spend two magical nights on the Blue Train. We rode the rails between Cape Town and Pretoria in pure luxury. As part of this epic trip across the African landscape, all the passengers are treated to a side trip to The Big Hole, Kimberley. We thought about it including it as part of the main article but just in case you plan to visit The Big Hole from the Blue Train or as independent travellers, here is our review of the Big Hole, Kimberley and Kimberley Diamond Museum. 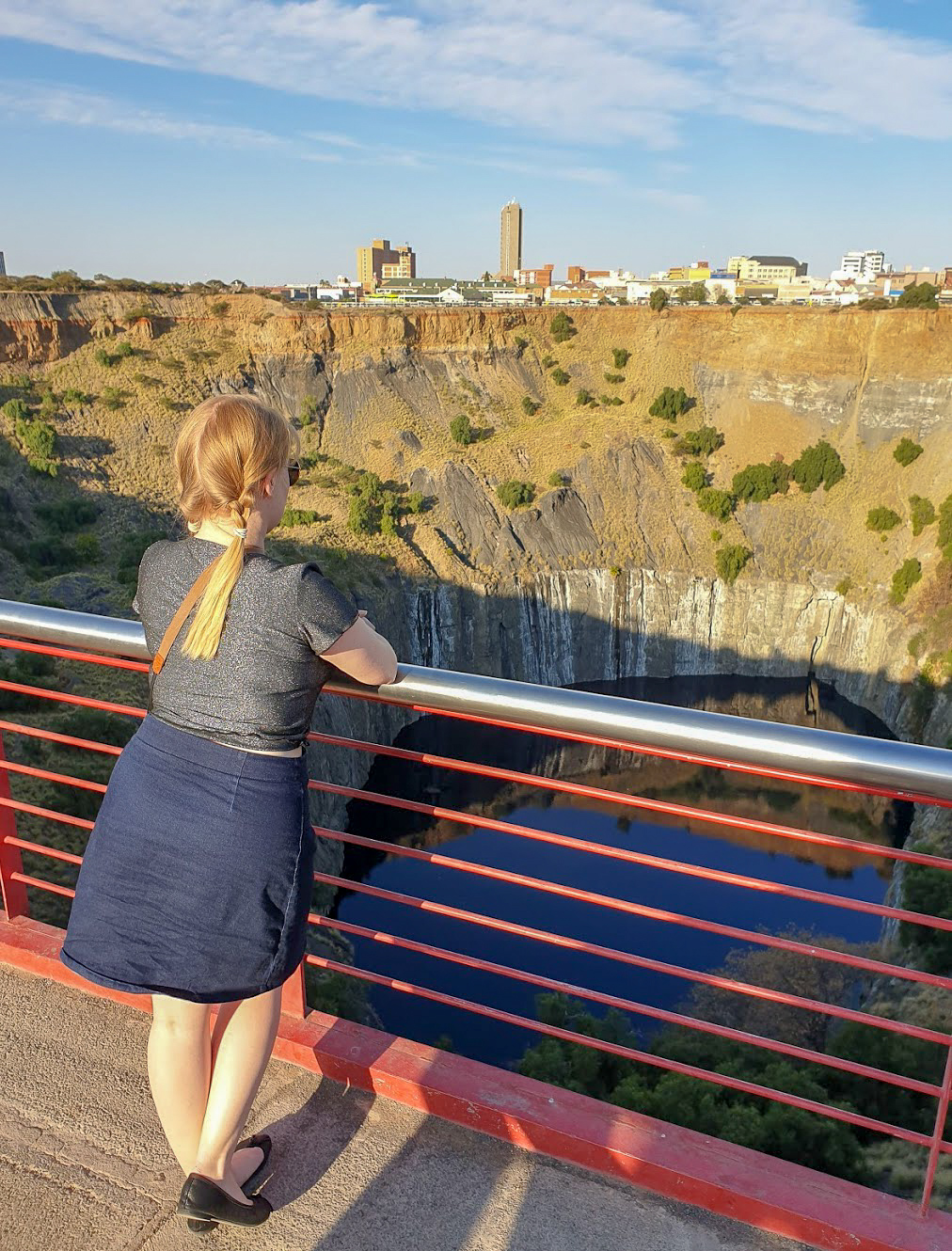 A visit to Kimberley has been on the Blue Train’s itinerary for years. However, it was often skipped due to train delays, meaning many guests just blew through. When they extended the journey to two nights more people got the chance to see it more often. We were amongst them, although our train also ran a bit late. Luckily, we were told we could still have a whirlwind visit.

The train passengers were divided into three buses, and we were each assigned a guide. Our chap had an accent that was a fascinating mix of South African and Scottish. Turns out he hailed from Glasgow but had been south of the equator for over 30 years. He was very jovial and as we went around, I couldn’t help thinking that he put a very kind, enthusiastic face on something with some troubling aspects. 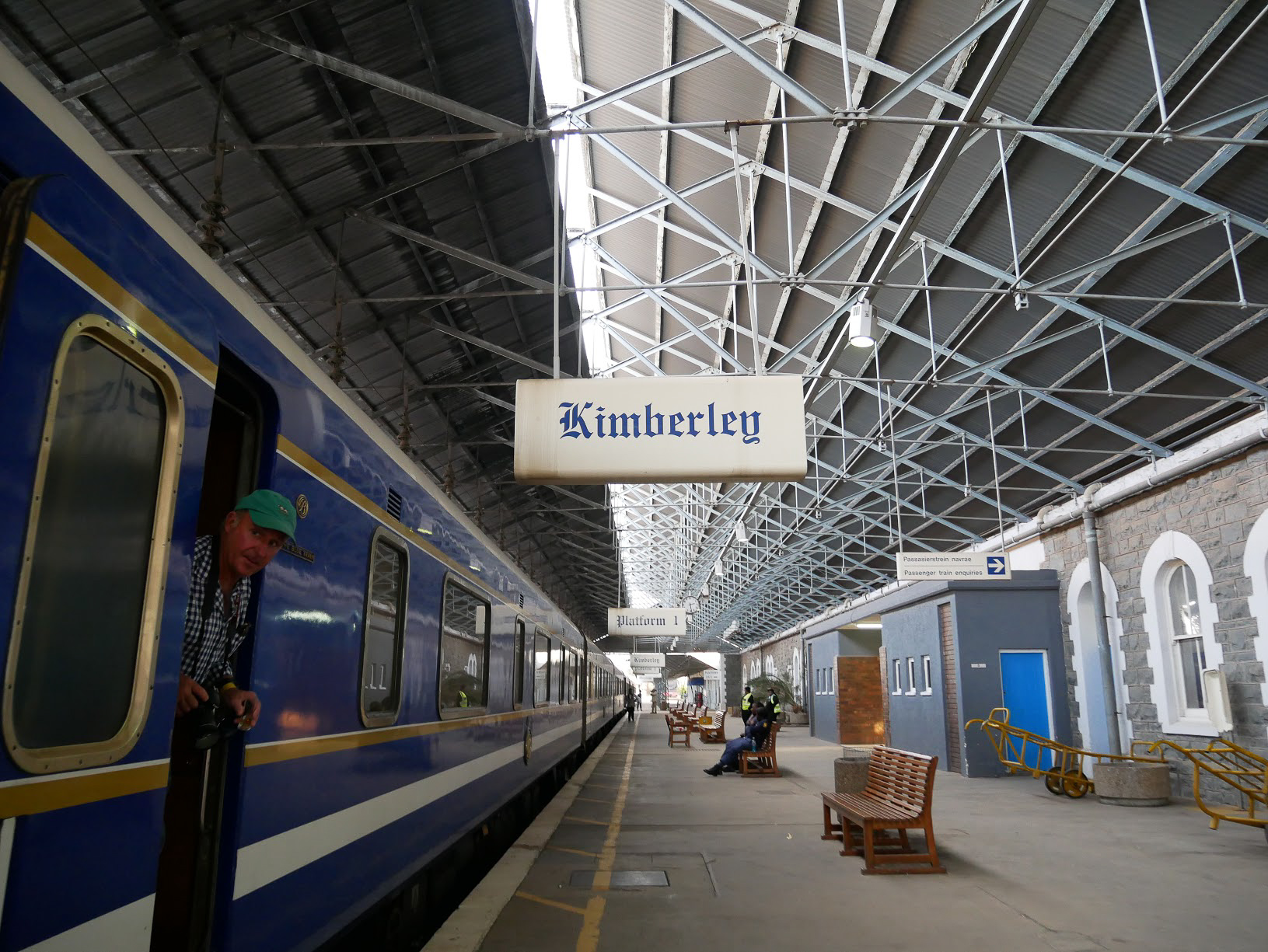 Did you know that South Africa had it’s very own Wild West? Kimberley became the centre of a diamond rush in the late 1800s.

In 1866, a child called Erasmus Jacobs picked up a particularly shiny pebble and it became his favourite plaything. His dad sold it (what a meany) and this shiny pebble was confirmed to be a 21-carat diamond! They called it Eureka and when a diamond (the Star of South Africa) that was four times the size of Eureka was found nearby, the rush was on. 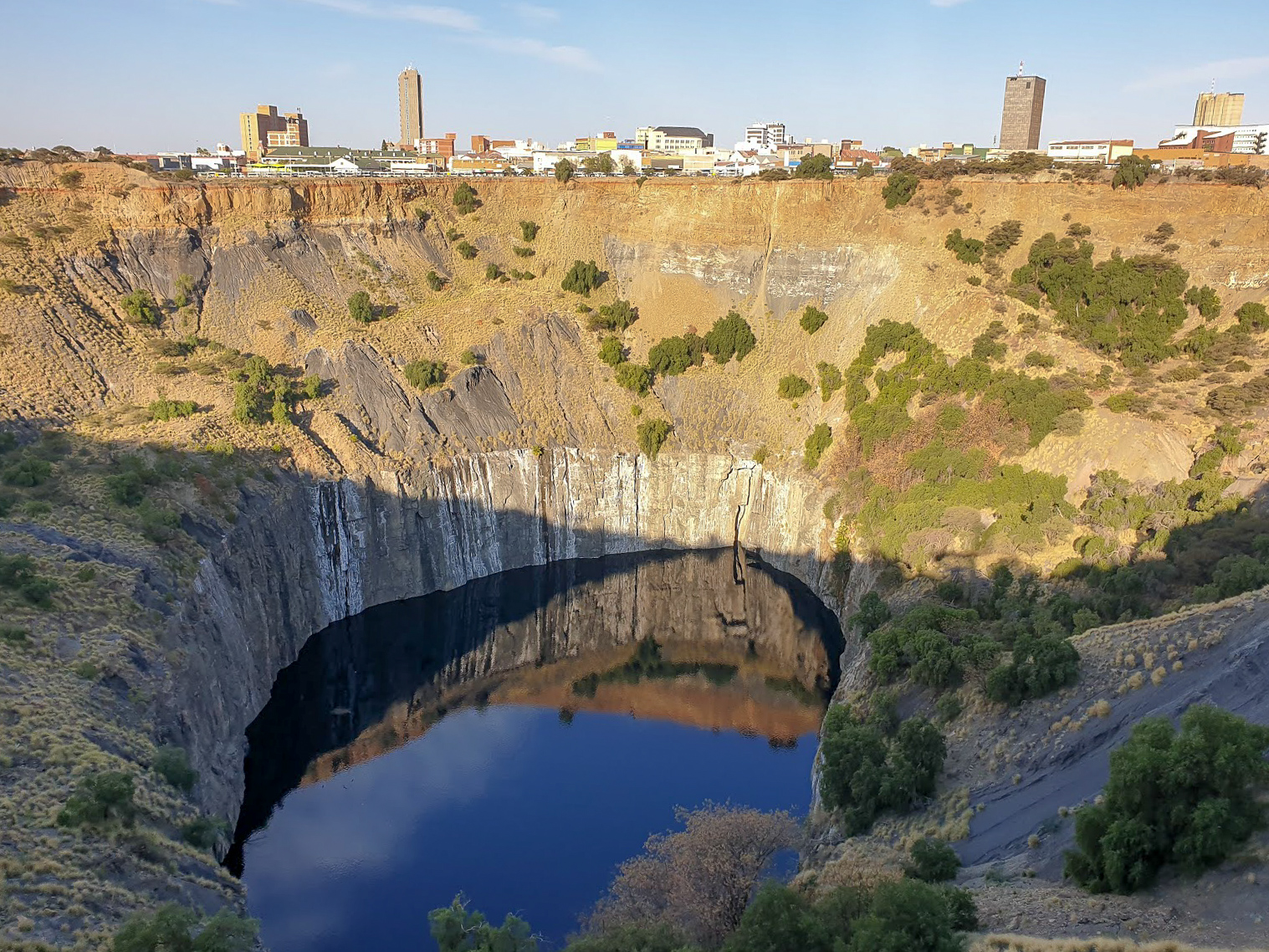 Prospectors came from far and wide to work on the hill that grew diamonds. The soil was soft and easily mined. This hill was worked very enthusiastically by thousands of men, for hundreds of claims. It was slowly flattened and eventually became a deep depression.

When the minors hit the harder rock beneath, many gave up. Their claims were snapped up for pennies and as the remaining companies dug down, they created a huge hole (The Big Hole). At 240m deep and 463m wide it is said to be the largest hole dug by hand in the world. However, this may actually be at Jagersfontein elsewhere in South Africa. This dig uncovered over 2000kgs of diamonds.

After a fierce battle between the two remaining companies, the victors De Beers (maybe you have heard of them) went on to excavate the treasures beneath the earth and do very well out of it, thank you very much. 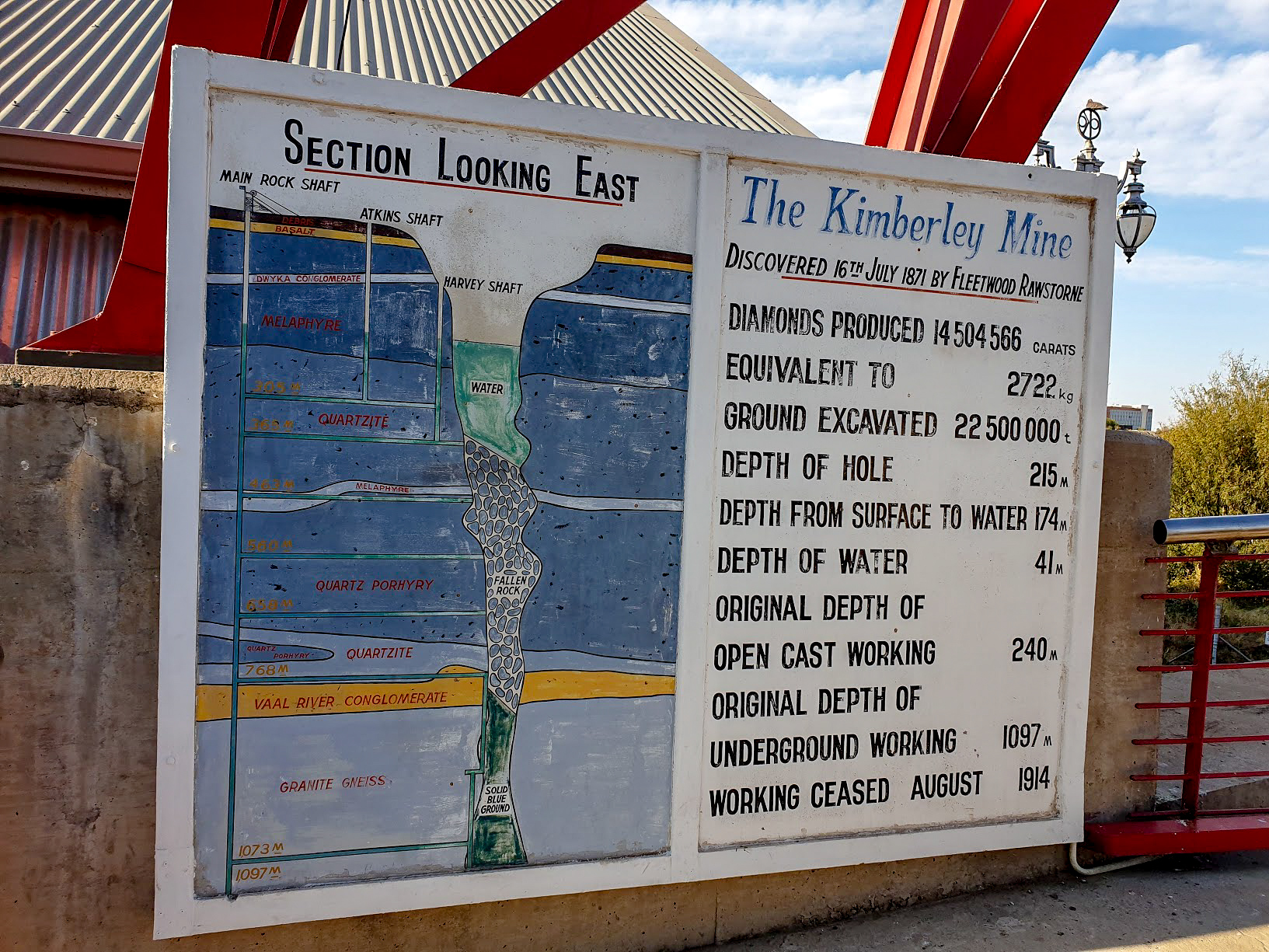 The Kimberley Diamond Mine Visitor Centre

I don’t think I was prepared for the visitor centre to be quite so put together. It was a little theme park-y. As we passed through the barriers, a wristband was put around our wrists lest we make a break for it and start gnawing rocks in search of diamonds (I guess).

The film tries to tell the story of Kimberley’s diamond rush from two perspectives; a black worker and a white travel writer. I tried to watch it with an open mind but it was difficult. As the whole place is owned by De Beers, there was bound to be a bit of bias. I was unsurprised that the issue of race was glossed over from the middle of the film. Who was it that dug that massive hole? It wasn’t the white owners, but thousands of black workers who the film neglects to mention. Although slavery was abolished in the 1830s, these poor workers were sleeping in huts, paid next to nothing and searched regularly because the trust didn’t stretch that far. I did a little research after the fact, and there is a nice article about it here.

Photos are not allowed in this area so unfortunately, all those beautiful, glittering gems are stuck in my memory. In this room, monitored by CCTV, there is a huge collection of stones, sorted by clarity, size, colour etc. I had no idea diamonds came in anything other than clear and blue…(and that is only because of Titanic).

Surrounding the vault is an exhibition all about the history of the mine. Again, it kind of skips any unpleasantness. I really feel like it would have been a more rounded experience had they presented the ugly truth as well.

Visitors a few years ago would have taken a dirt path out to the edge of the Big Hole, but now a huge gantry has been constructed. It looks just like it belongs with distinctly industrial beauty. It isn’t for those unhappy with heights as it sticks out over the edge of the hole. If like us you like a nice high vantage, it gives a stunning view. 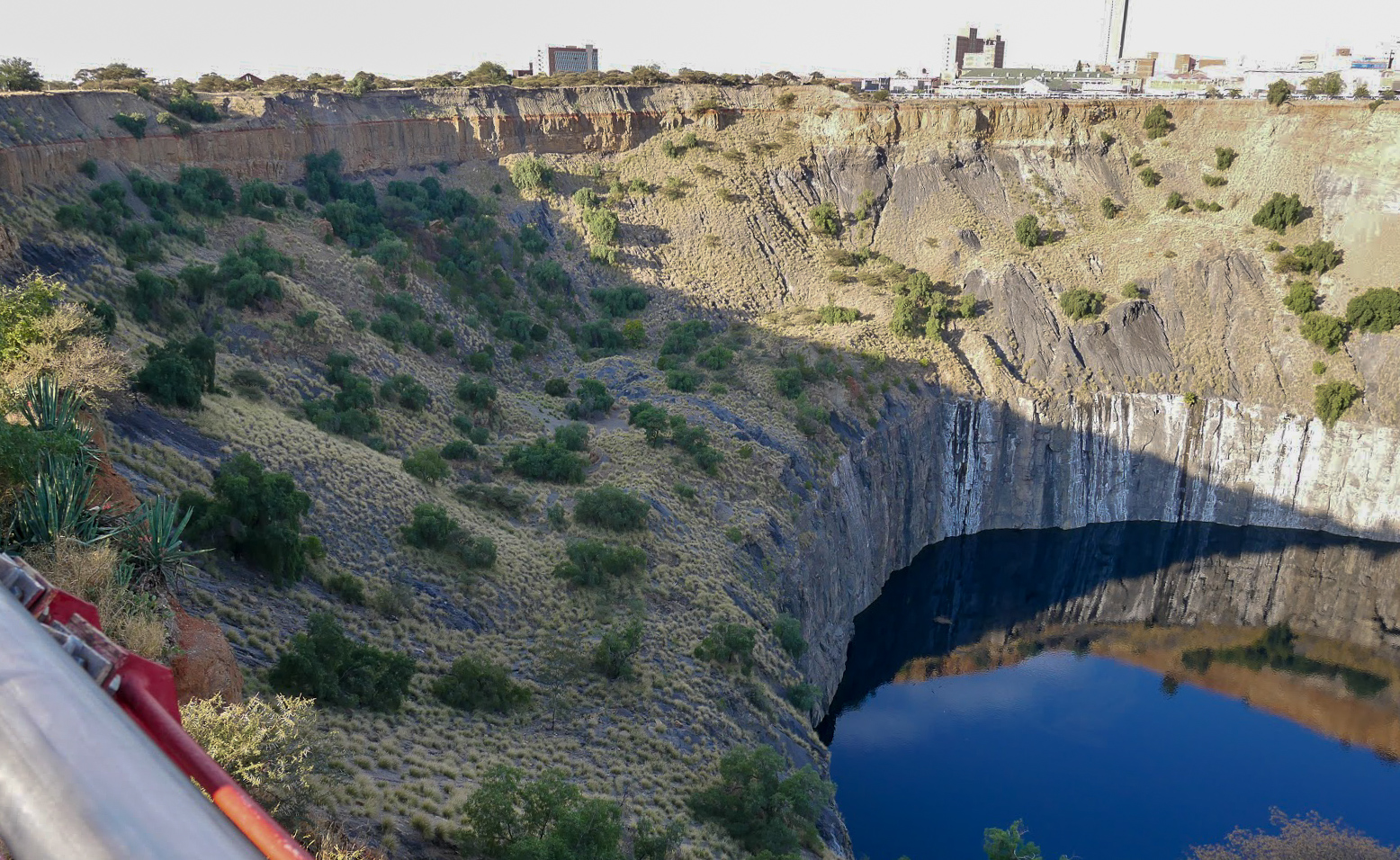 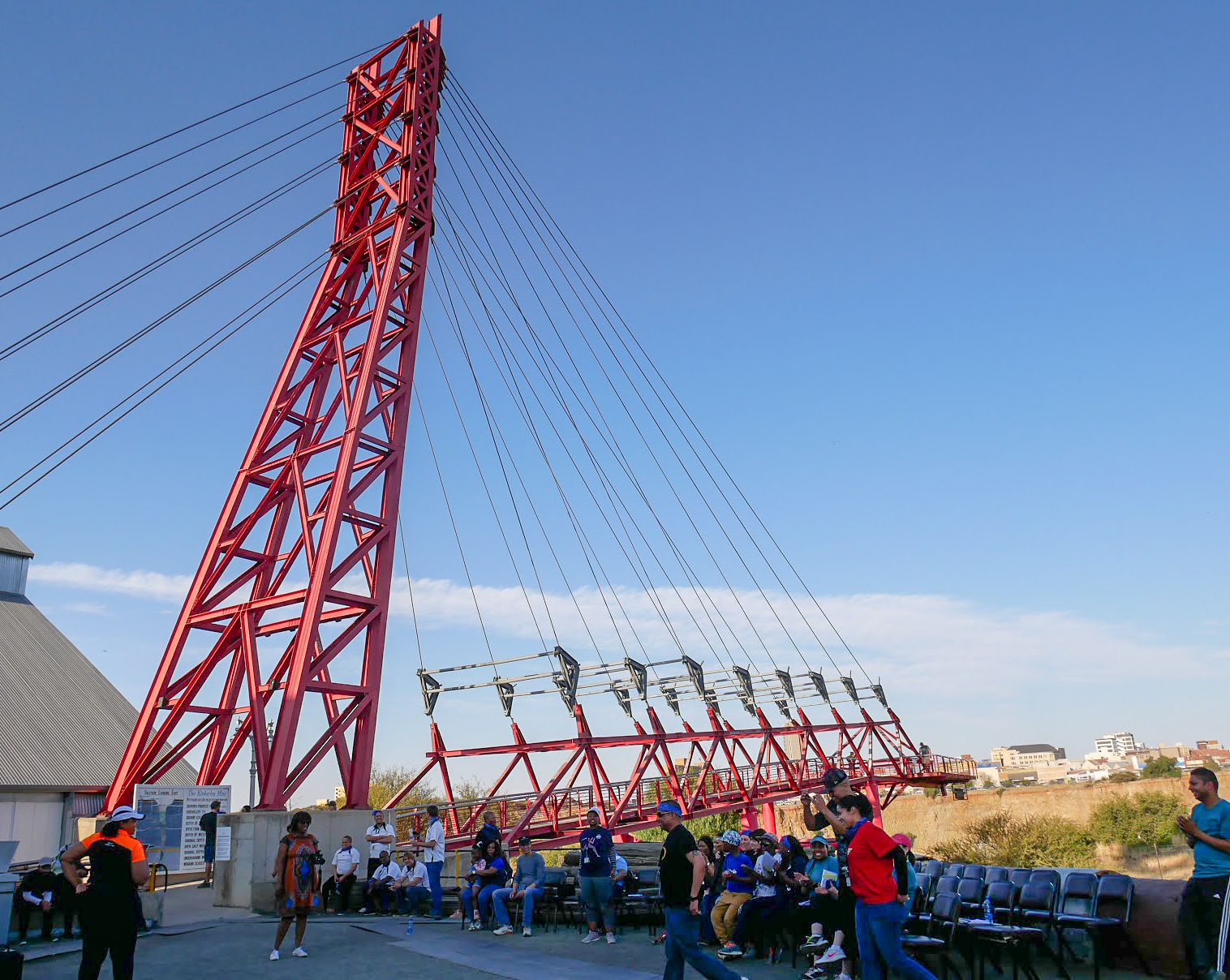 The Kimberley Mine Museum

Down a flight of stairs, a section of mine has been recreated. Here you are given a small introduction into the method of mining for diamonds. I thought we had taken photos down here but apparently I have made that up. I guess it was just a pile of rocks anyway…

Quite a large section of town has been recreated just outside the visitor centre. It feels a bit like a film set, but it is quite fun. Step back in time to 1895 (or so). Ride the tram, pose with an old steam engine or wander through the shops. You can even buy yourself some actual diamonds in two of the stores. After hearing all about the diamonds for a good hour, it is weirdly tempting. 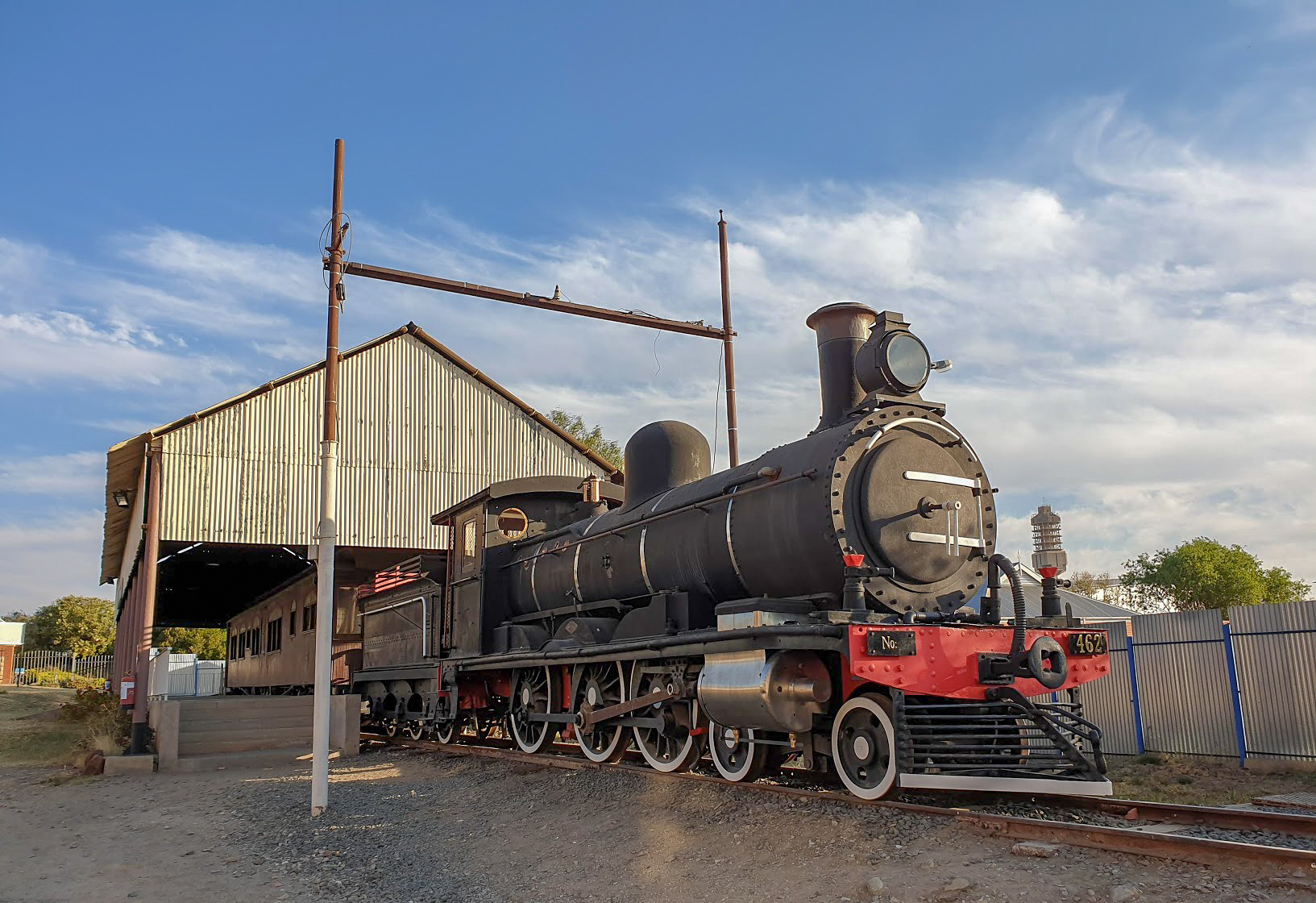 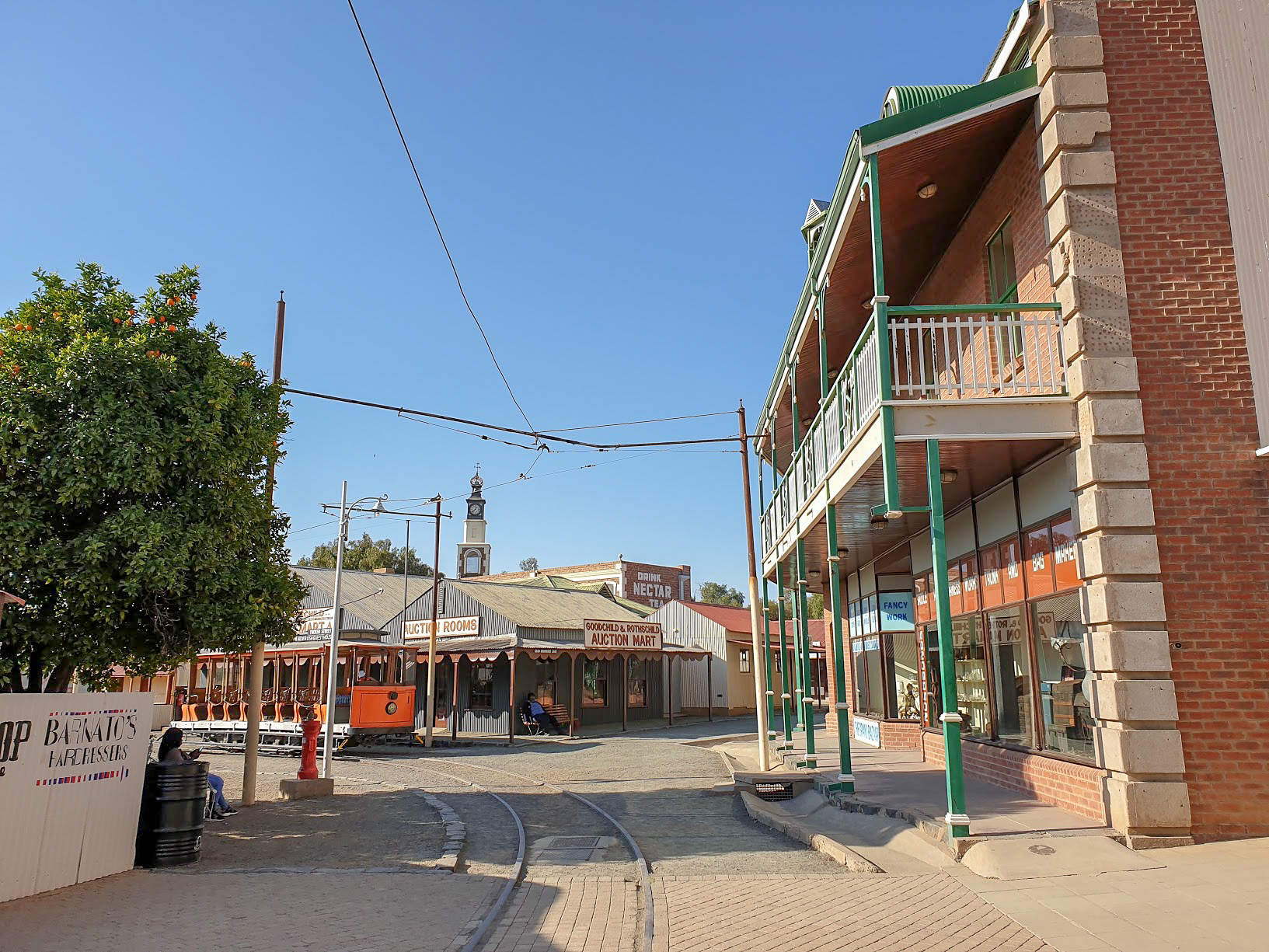 If we had not been running late, we would have spent a lot longer here, probably just making rubbish Wild West films. 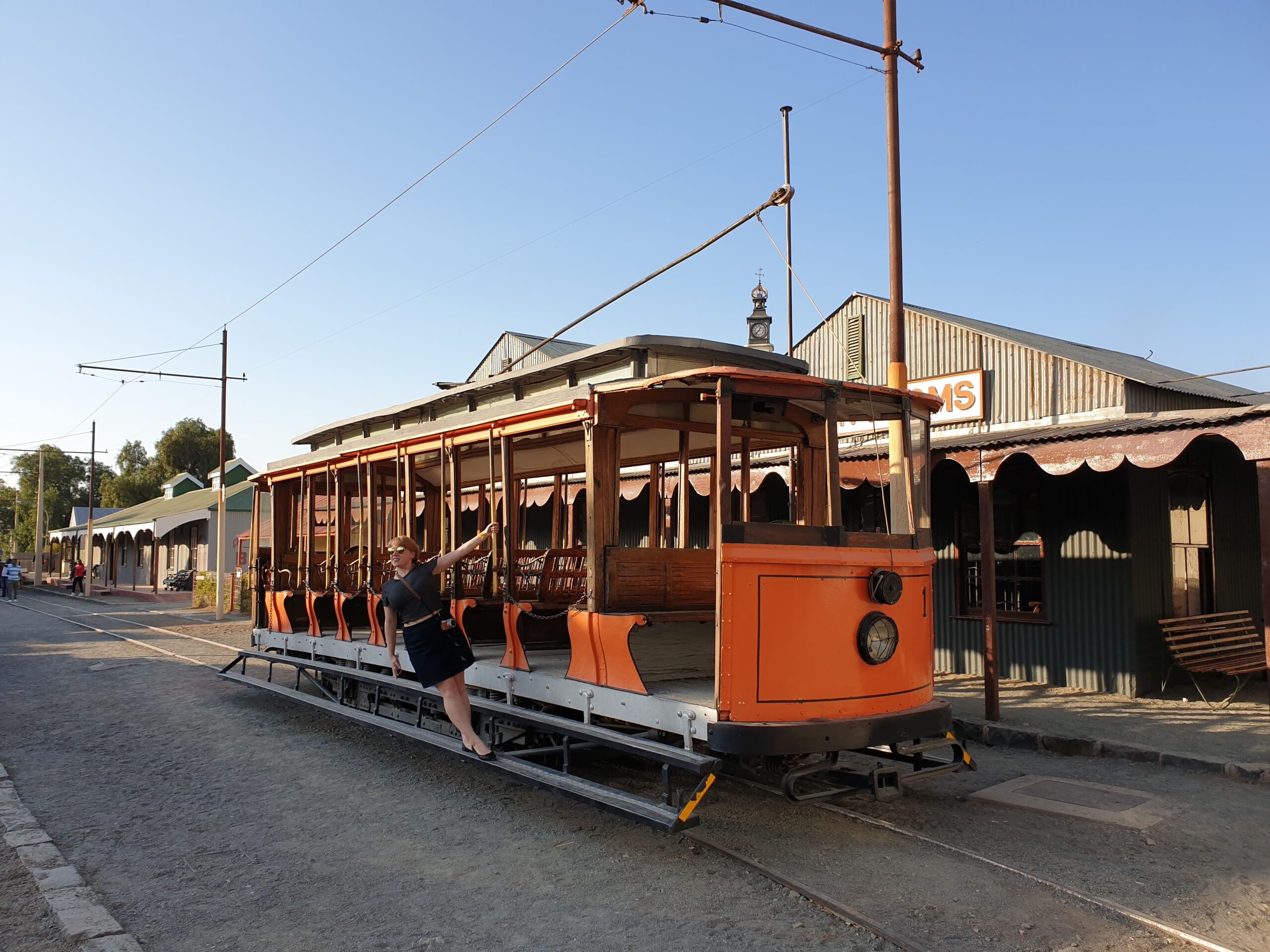 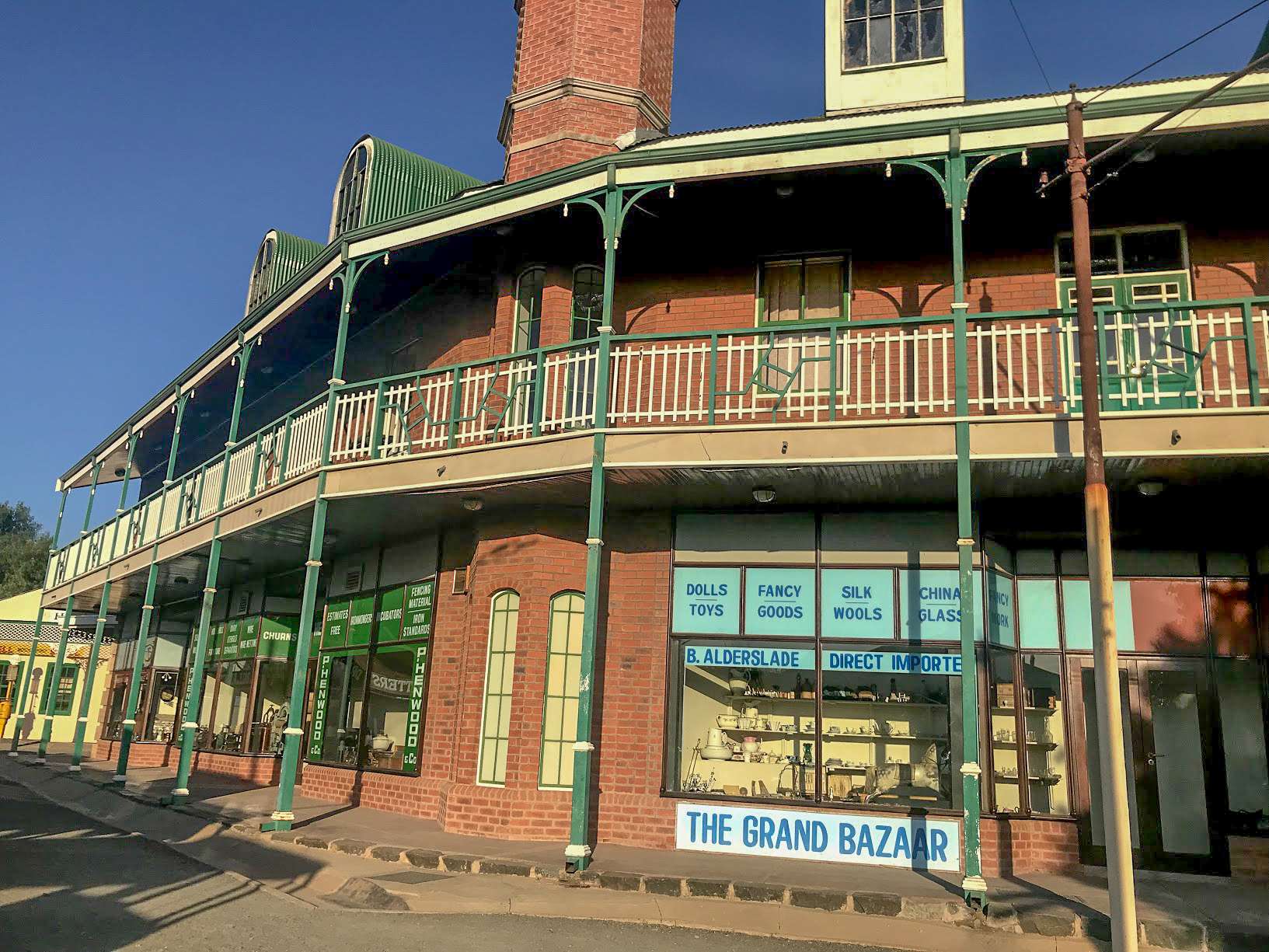 If you are planning to visit The Big Hole and Kimberley Diamond Mine, here are some things you might like to know: 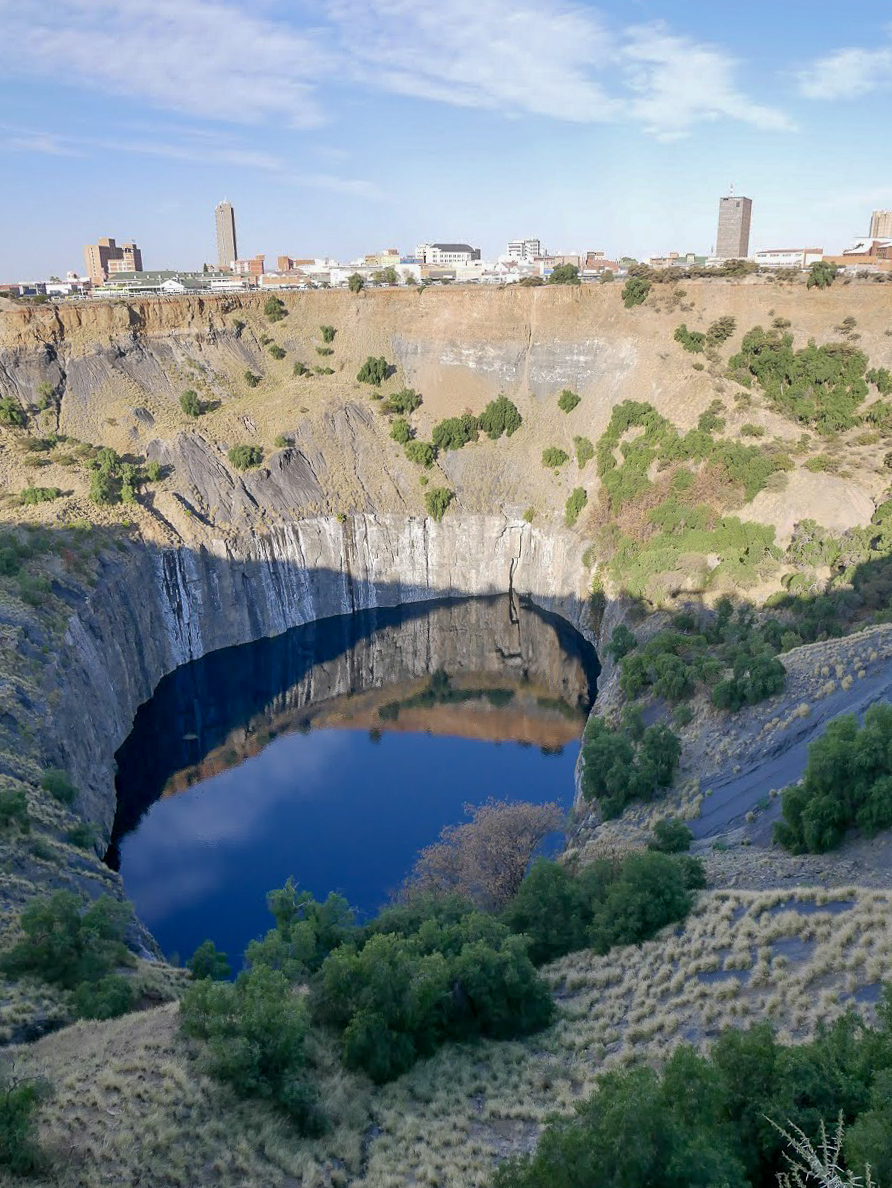 Why not watch the video we made on The Blue Train!?

The Big Hole and Kimberley Mine Museum made a nice excursion from the Blue Train but it is best not to arrive with a sceptical eye. Just take it for the tourist attraction it is and don’t overthink it or you’ll be picking holes in the narrative as I did.

One thought on “A Visit to The Big Hole and Kimberley Diamond Mine, South Africa”