The story so far…your narrator found a crazy deal from London to the the Maldives; just £192 one way!! We have taken one flight from London to Zurich, and now we are going to embark upon leg two. From Zurich we would be taking our flight with Edelweiss Air, the leisure airline owned by Swiss Air. This is our review of Edelweiss Air Airbus A340-300 economy ZRH – MLE. 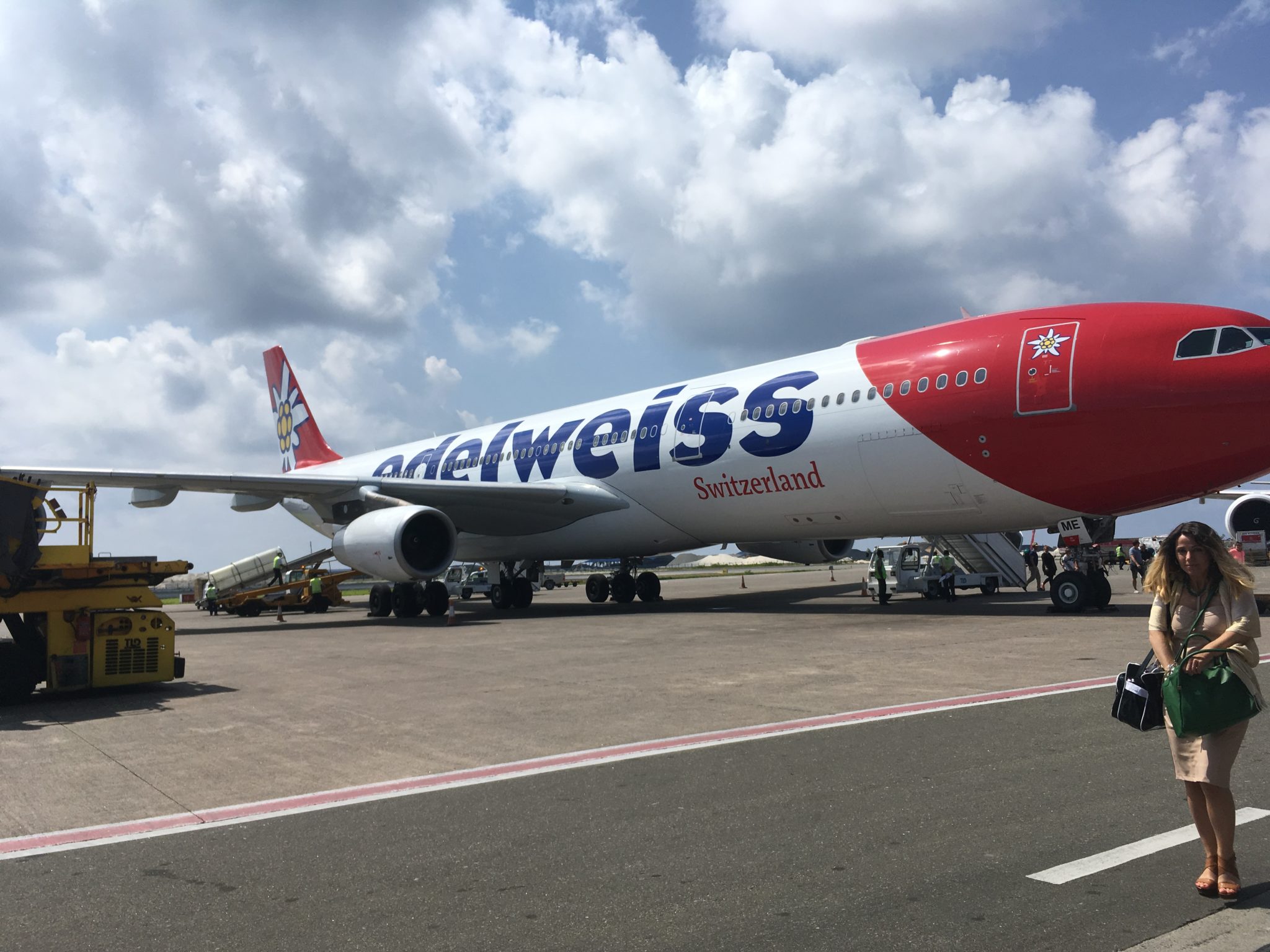 Having checked in from London, we didn’t need to visit the check in counter, which is good because Zurich International’s check in is slightly confusing.

We made it through security quickly, but then discovered that there isn’t a lot of seating in the airport’s main concourse. The flight was delayed by a late inbound, and so we needed to find a seat.

We sat and watched the screens (plus Flightradar24) as the flight delayed by tiny increments. 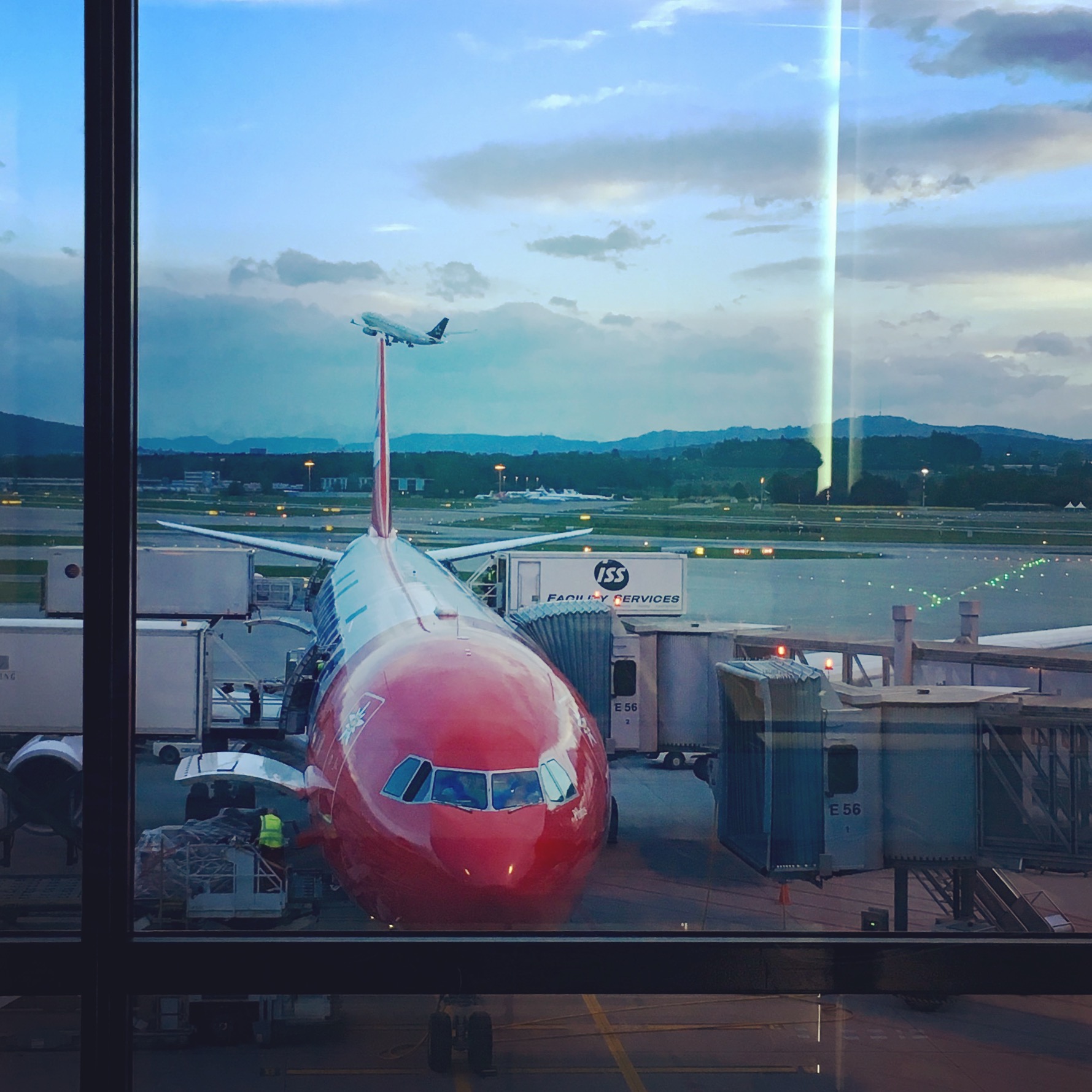 Finally a gate number popped up and it was a 15 minute journey down to the gate. We approached the desk when we got there. The SWISS app had shown that there were a fair few empty seats. The staff were really sweet and accommodating. Mr Fluskey wangled his way into an empty row of four so he could get a decent night’s sleep. 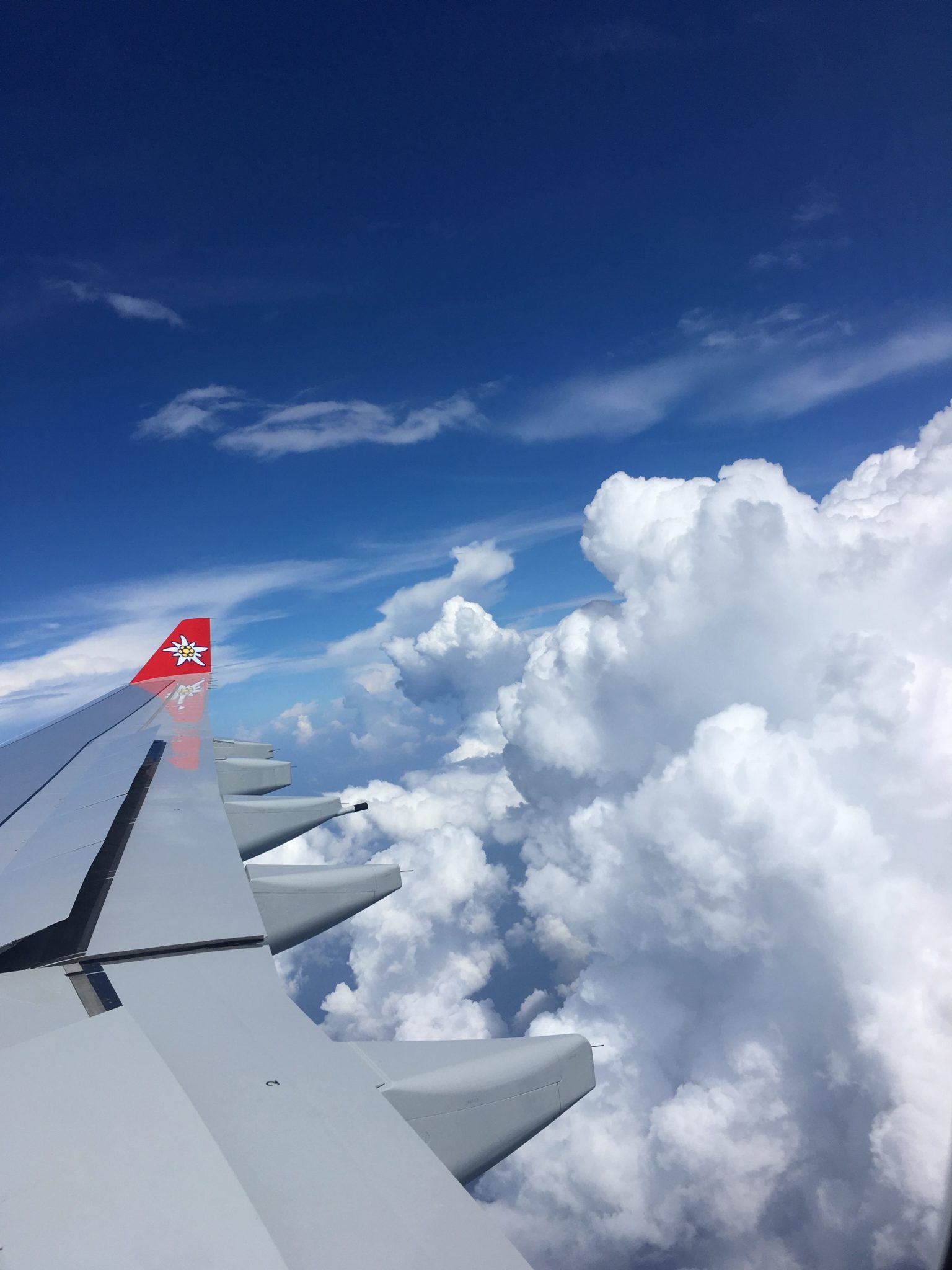 The cabin was bright and clean, but the blue seats and orange pillows were a little clashtastic! I thought the logo on the wall was a simple but cute touch.

When we boarded, the lights were all plain white, but they faded in the orange side lights which was much nicer after take off. (Sorry that it made lots of my pictures quite orange-tinted). 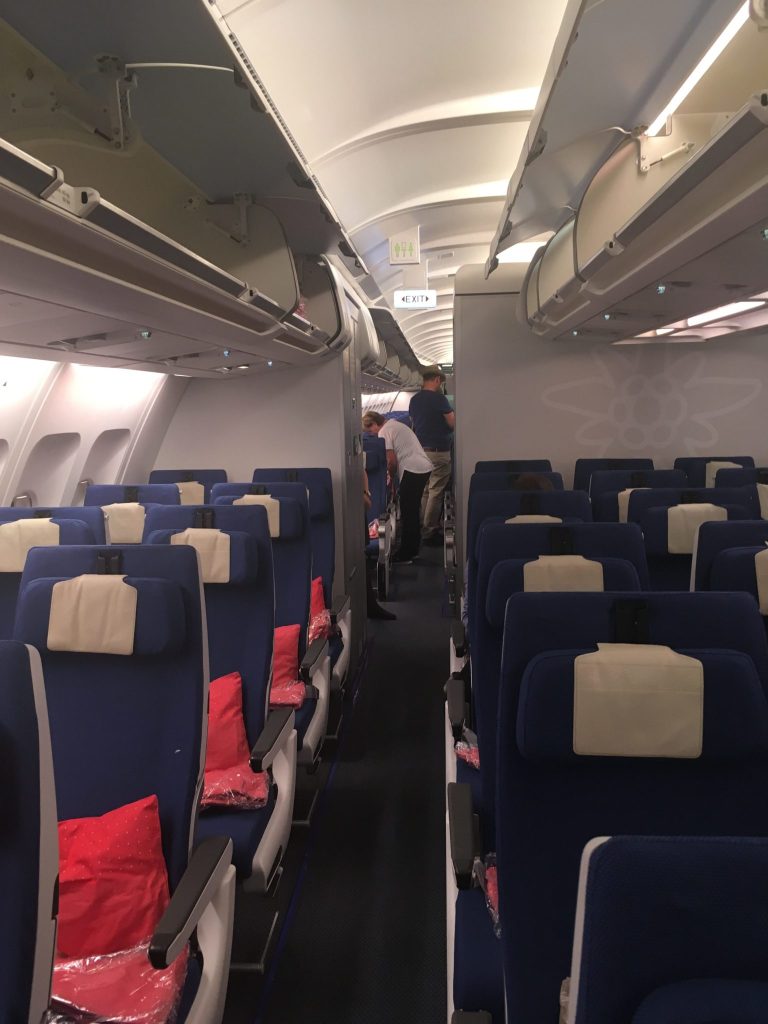 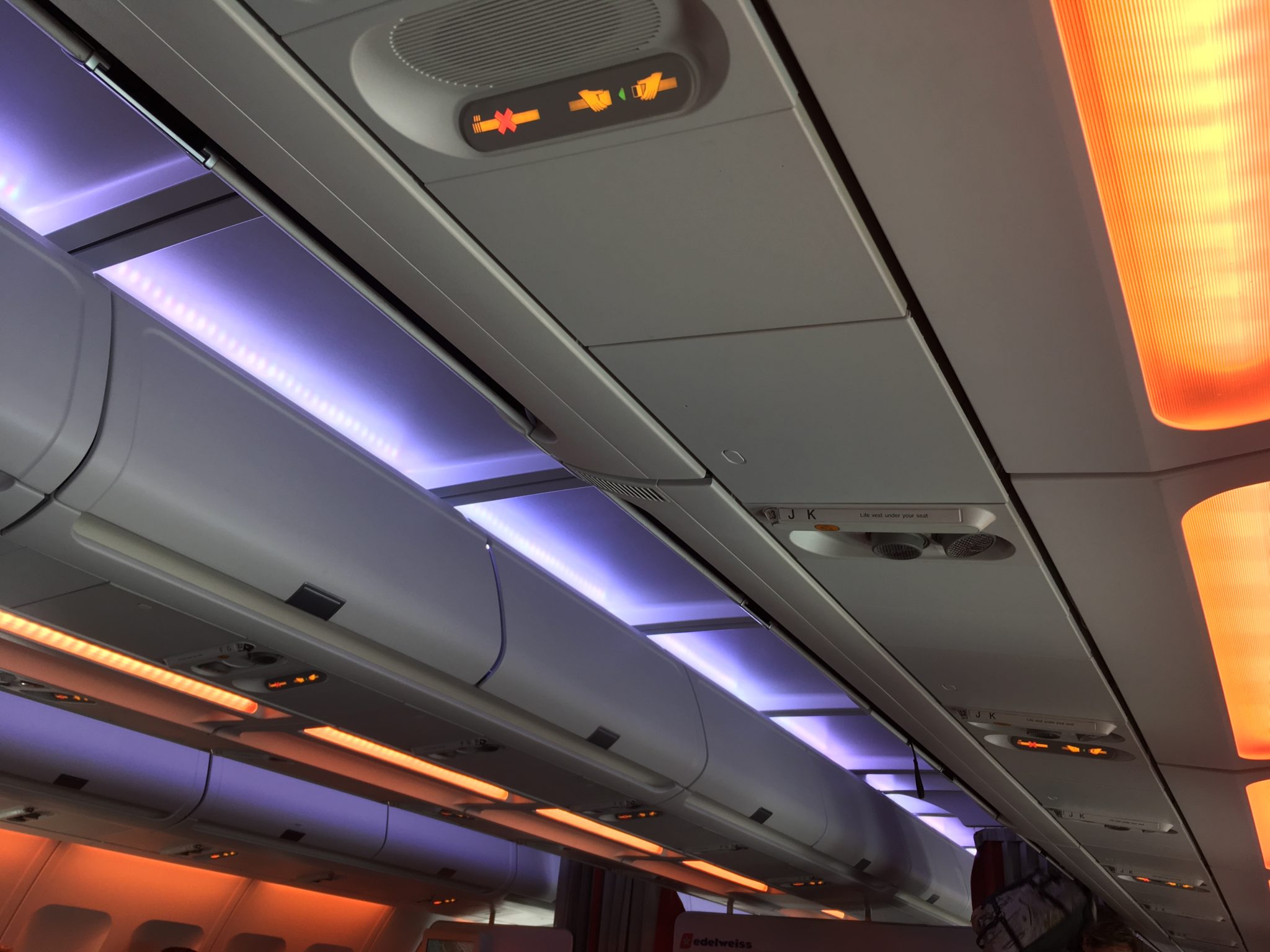 The windows were quite small so if like me, you like the view, make sure you get the window seat. As soon as one person is looking out, the view will be utterly obstructed. Let’s continue with our review of Edelweiss Air. 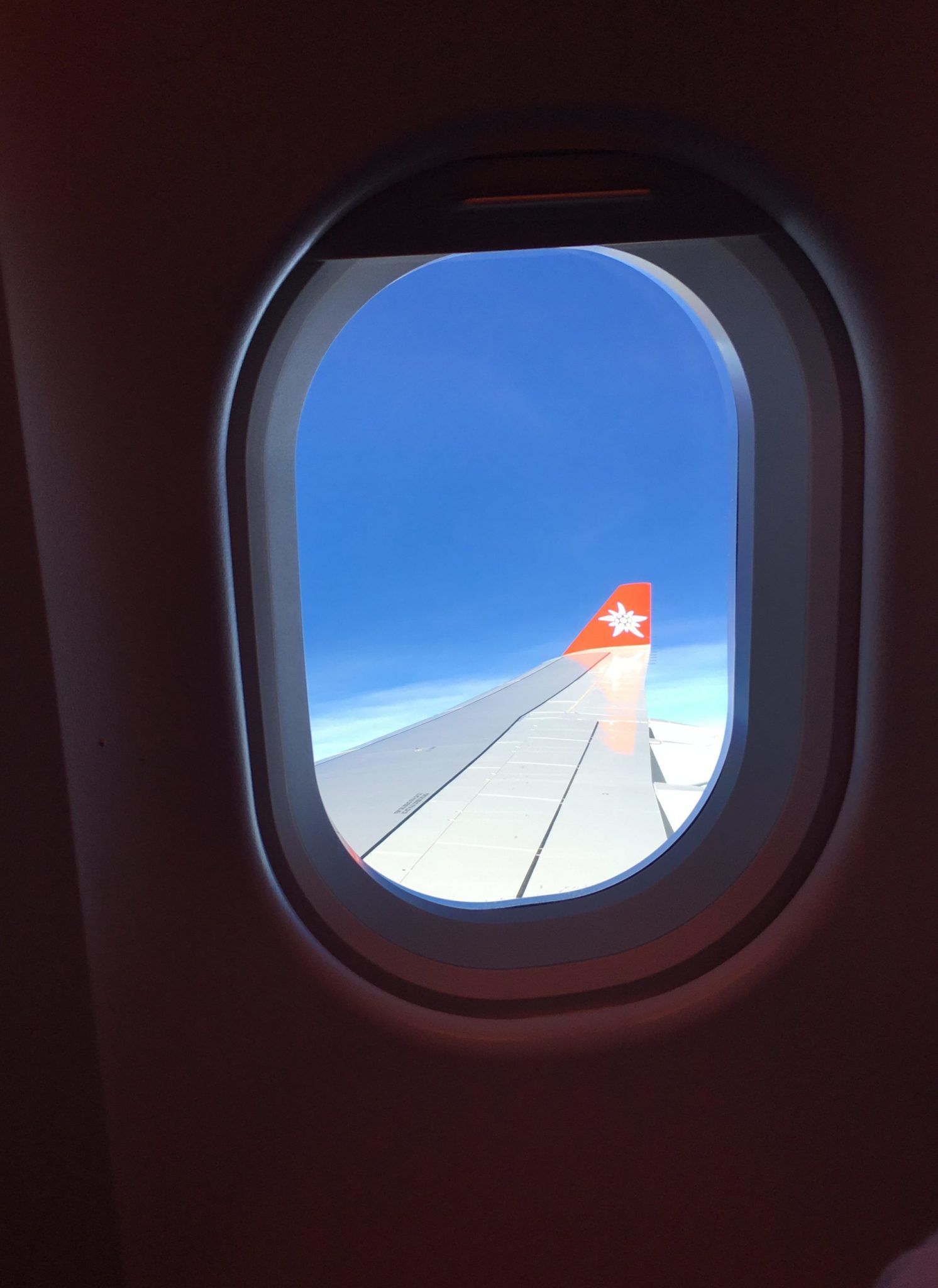 Check out all our flight reviews including FlyMe Maldives, Turkish Airlines and Emirates

I liked the bright blue of the seat covers but the bobbly material and blocky padding felt cheap.

Edelweiss Air’s seat recline seemed slightly below average for an economy seat on a long haul flight. You get a strange headrest. It is very adjustable vertically, which is great, but bending the side flaps forward creates a v-shape. Do you have a v-shaped head? We don’t!

The tray table was very compact, and easy to operate. The only issue was that you have to push it quite hard to close it again, and it was quite a loud pop, unless you lifted the flap. This would really bother the person in front of you, so a little care should be taken. 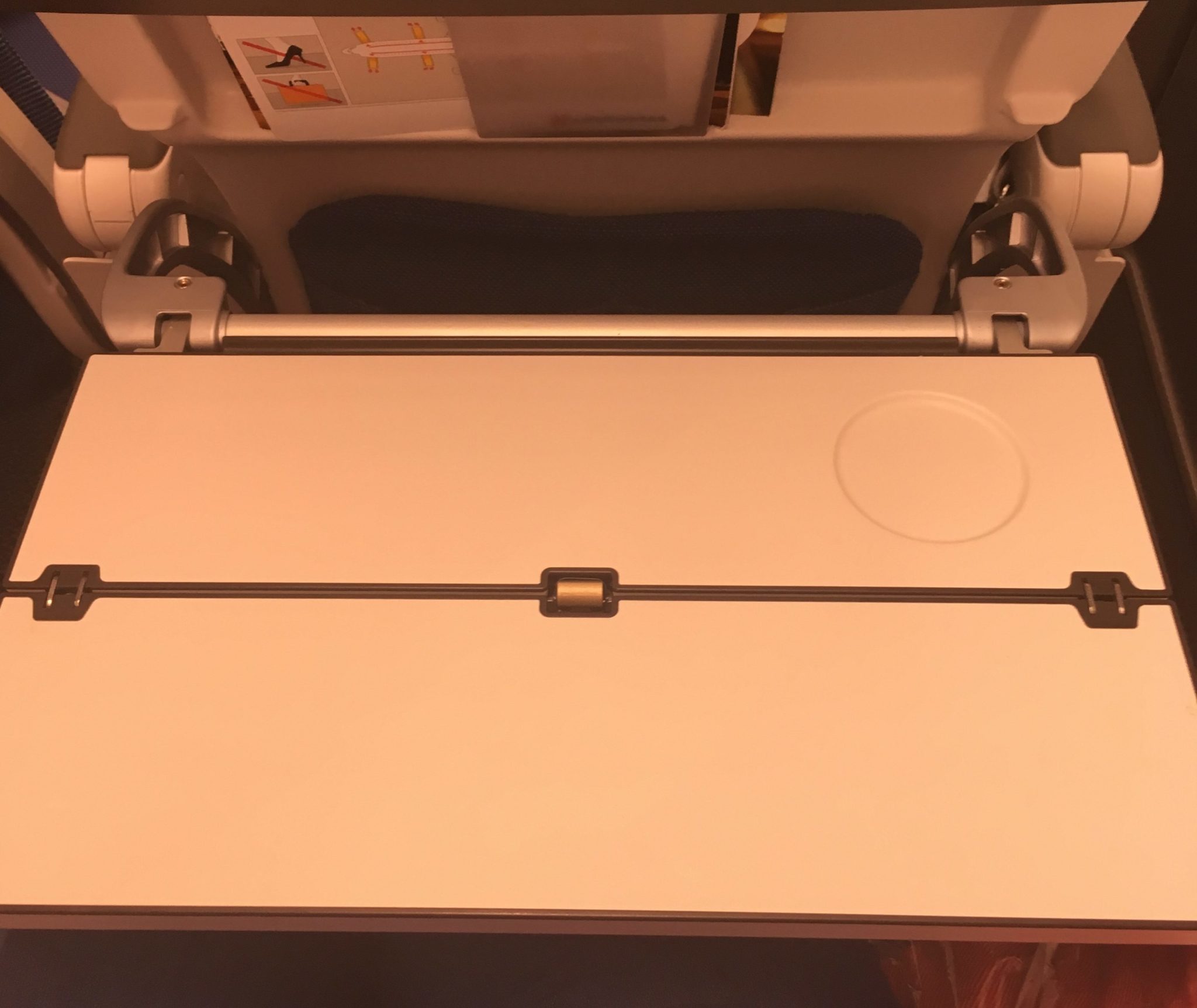 The seat back pocket space is very good. You have a plastic magazine pocket above the tray table. Remember that small things will fall out of the bottom when the tray is opened so keep this for those magazines. 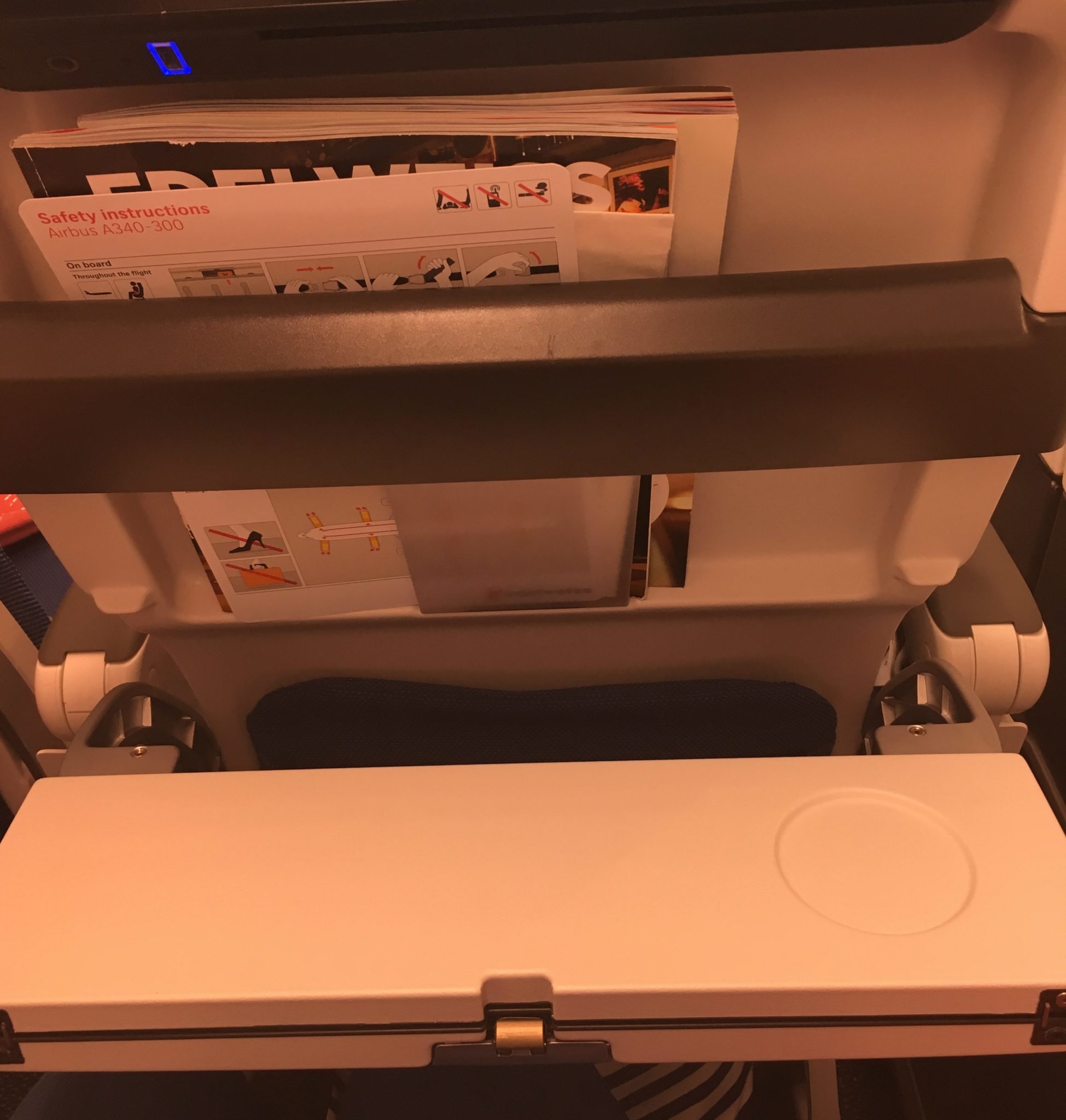 Below the tray table is the actual pocket. There is a large section, and on the front two smaller sections for your phone, cables and other little bits you need. Just remember to check all the pockets before you disembark! 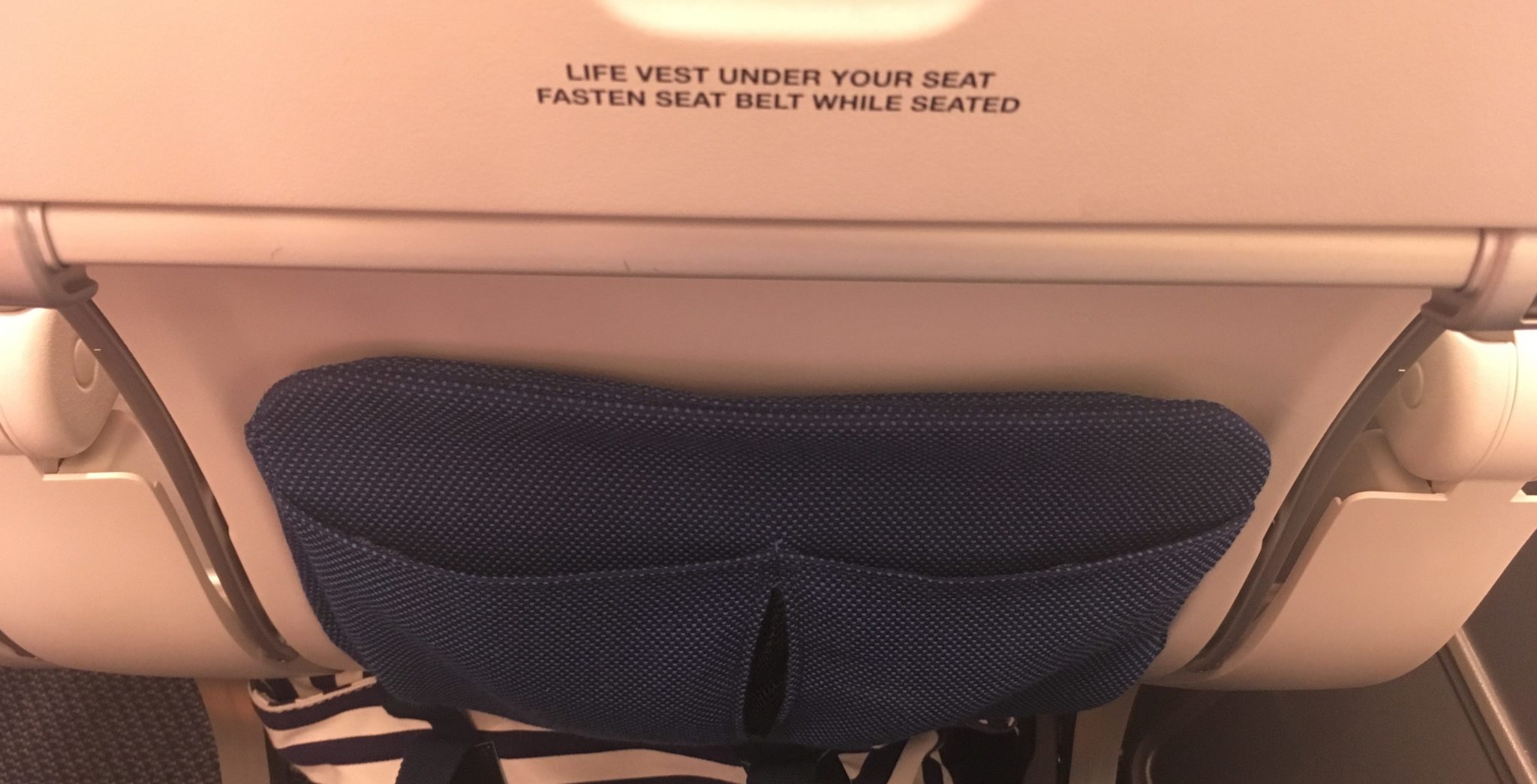 The screens in the seat back are a great size for an economy cabin. It is also a nice matte finish so it isn’t too ruined by reflections. At the bottom of the screen is the headphone jack. We love having the plug here as it is much harder to accidentally knock out. There is also a USB point so you can charge your devices (slowly). 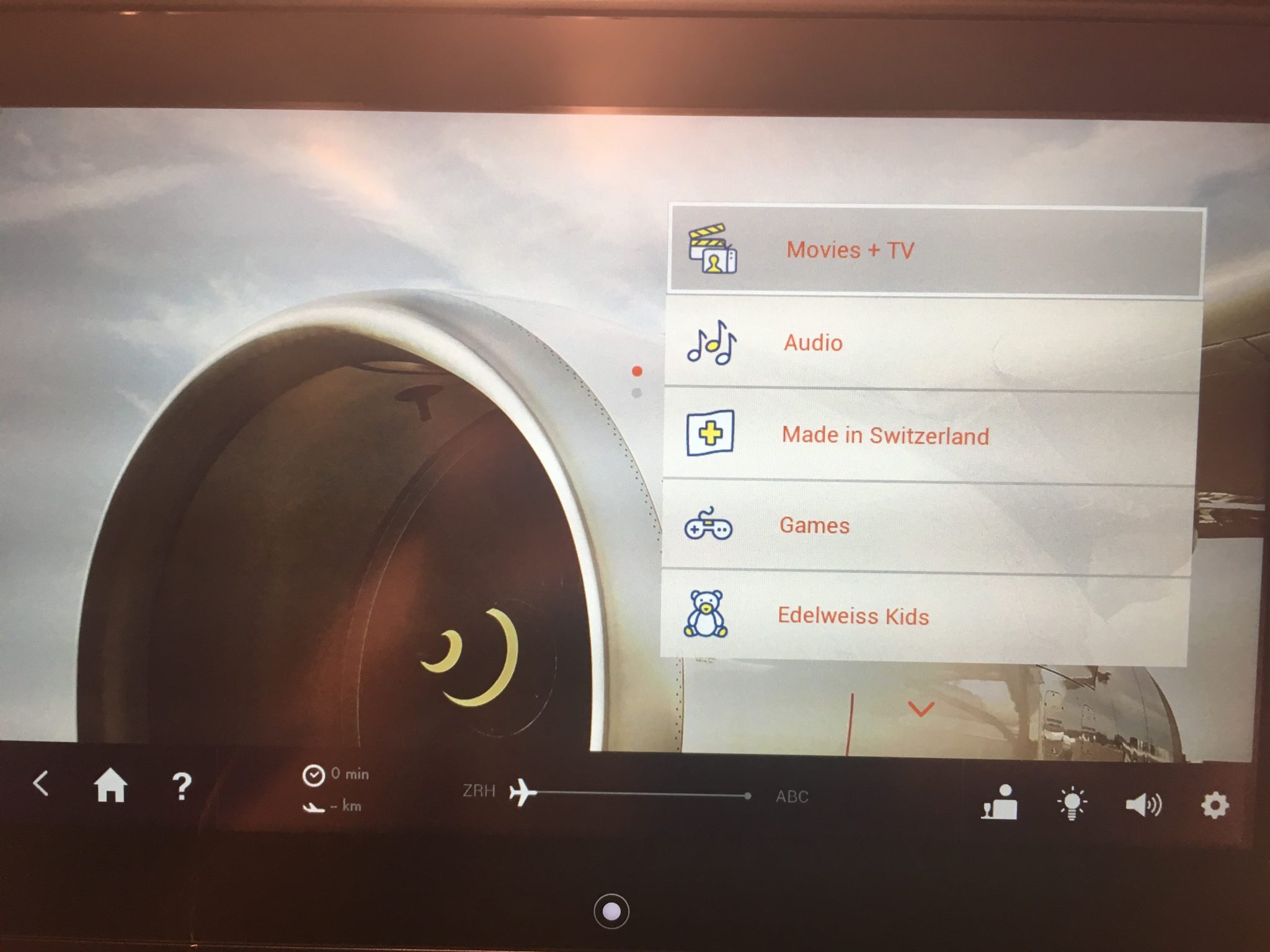 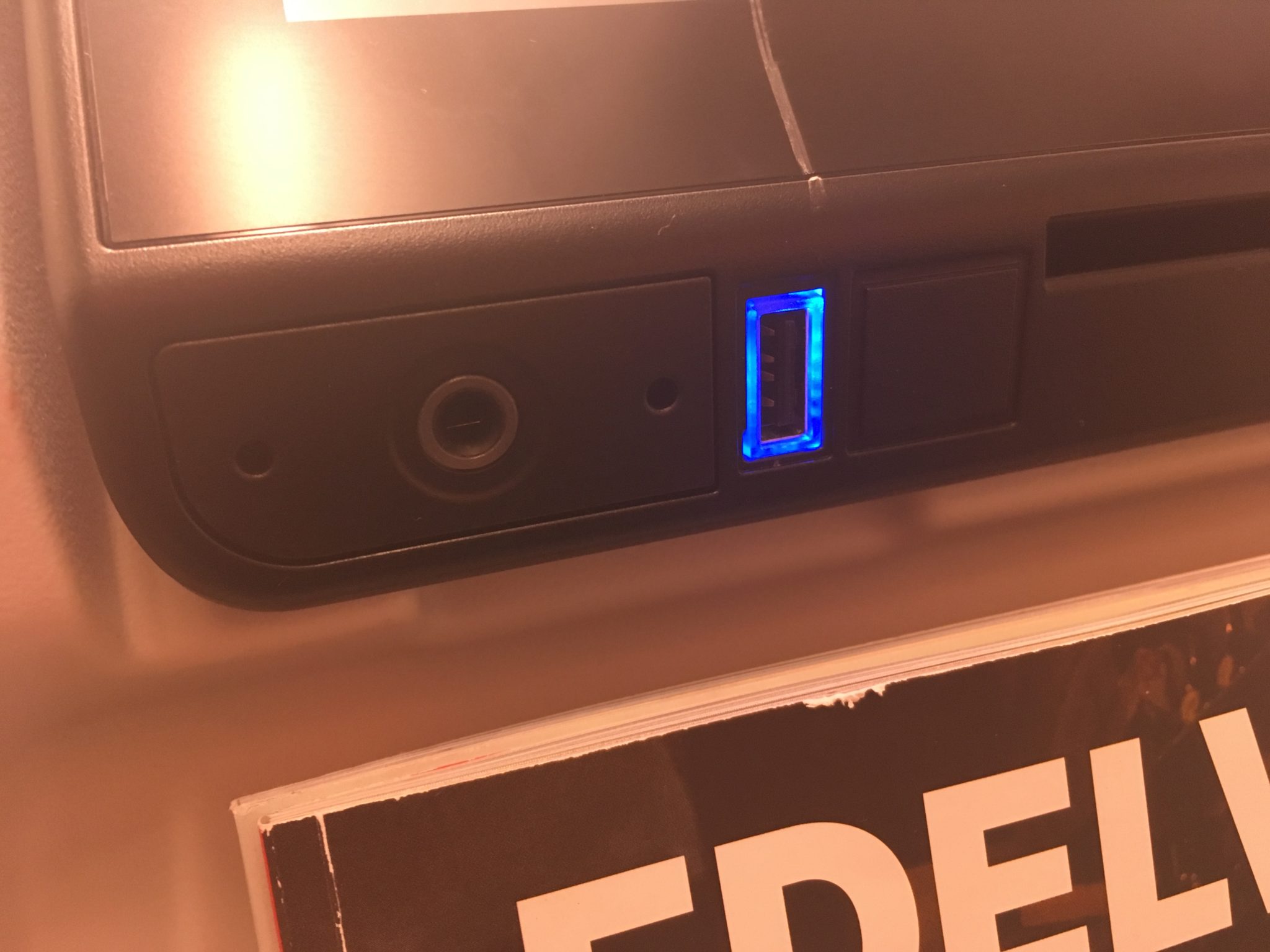 The selection of films was pretty good, with films from the last six months. I watched Jumanji and Pitch Perfect 3 (because I’m just that cool). They also had a reasonable selection of TV, including a few Netflix favourites.

The sleeping gear was a game of two halves. The pillows were very plump and I liked the thick covers. The blankets, however, were quite thin and not even big enough to cover half of my five foot frame. If we were taller, they would have been really silly. I don’t think that the blankets being square helped. 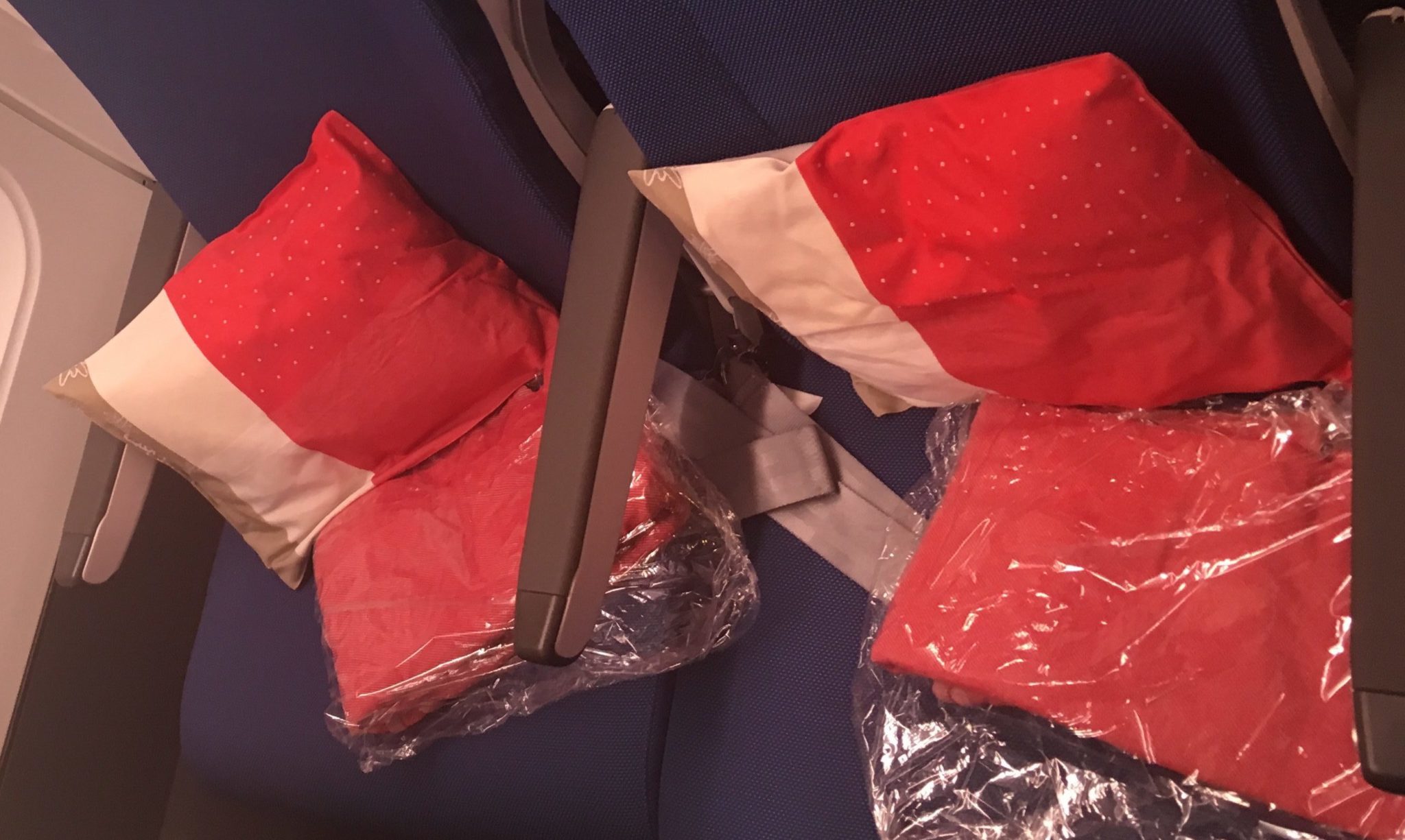 No amenity kit was provided for this overnight flight in basic economy, but economy max gets one.

The bathrooms were clean enough but were very basic. The water came out luke-warm; nice to wash your hands in but a bit weird for brushing your teeth. It was just another reminder that you are in the economy cabin at the back. 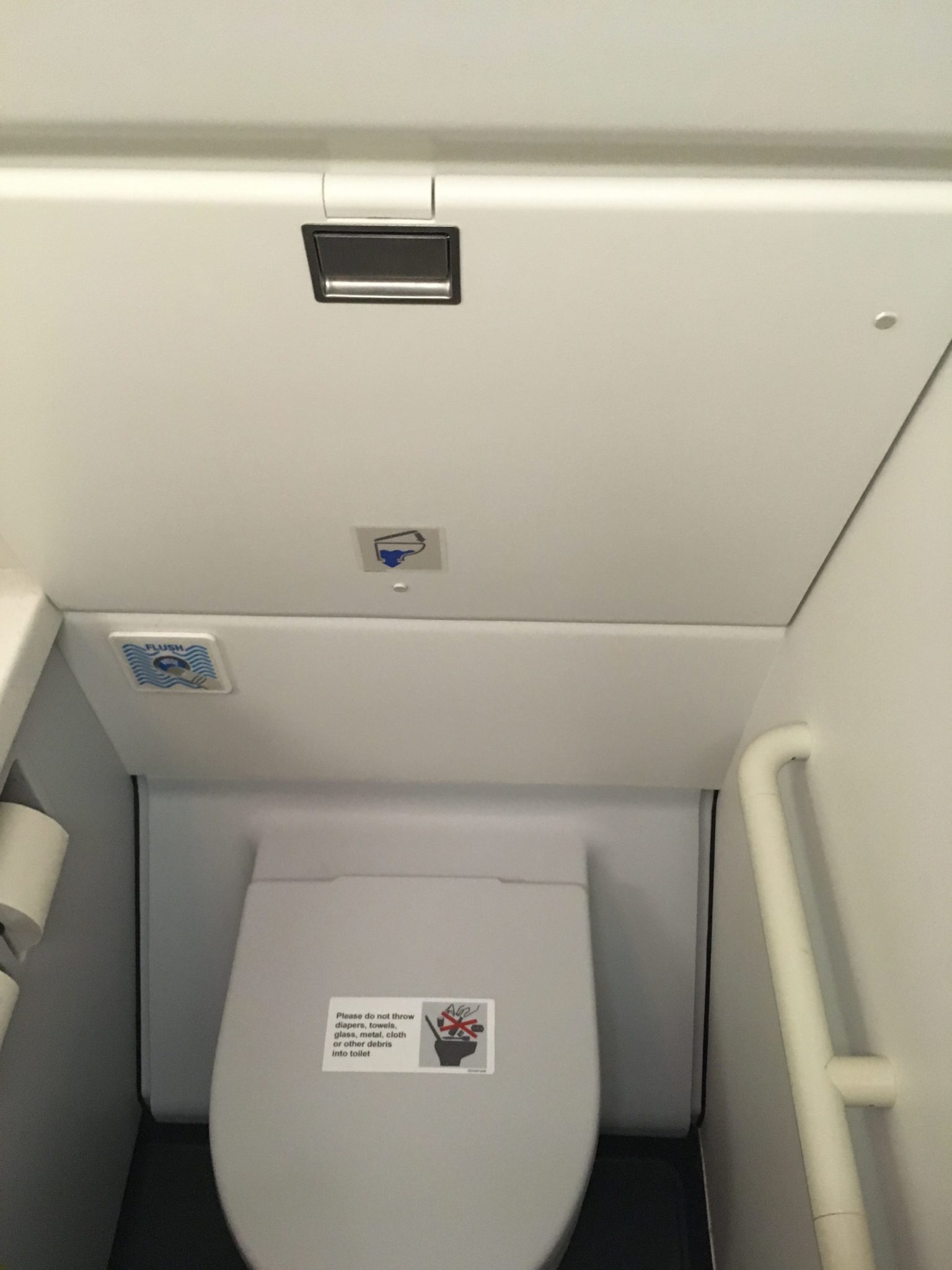 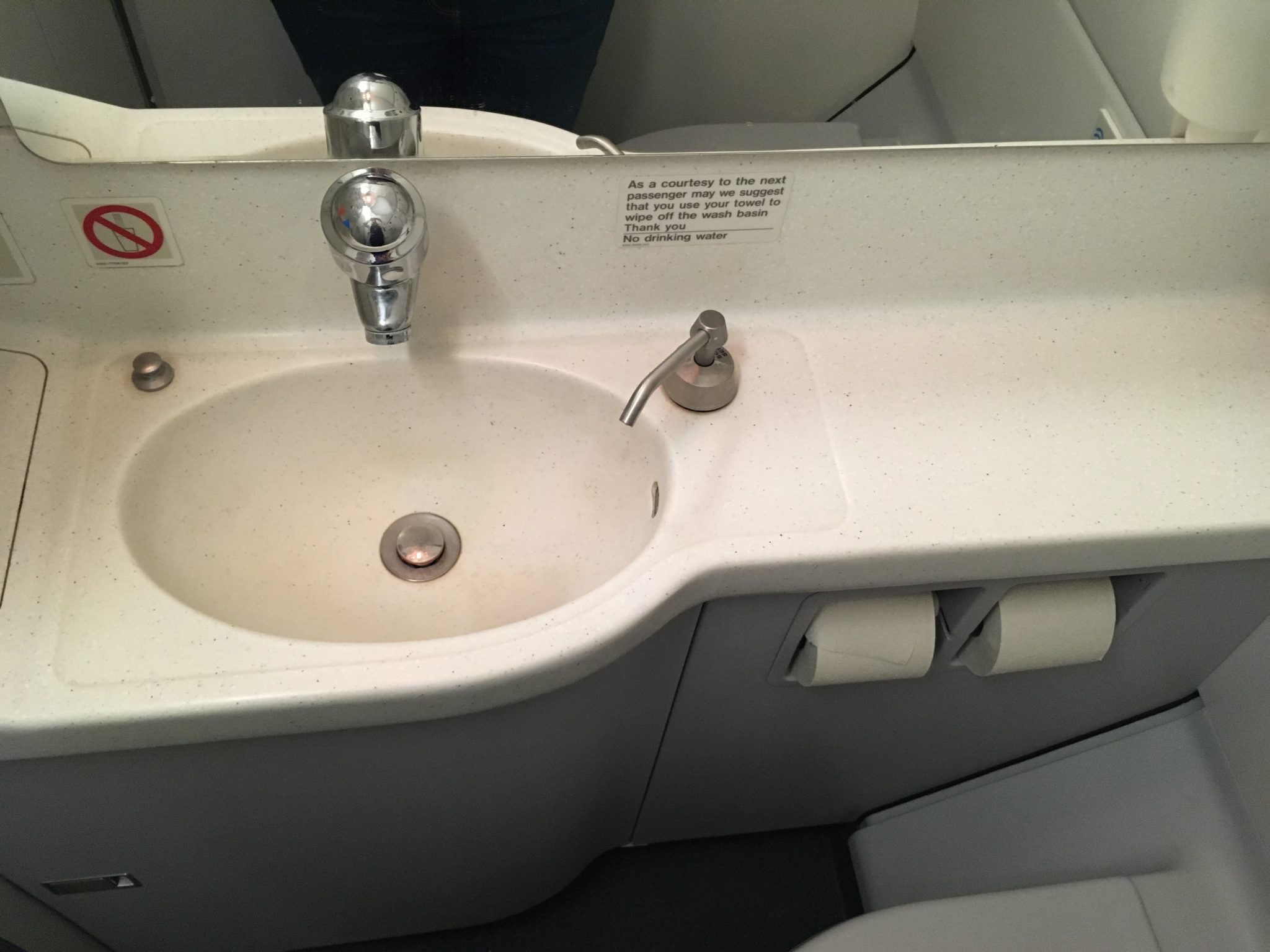 Dinner was served roughly an hour and a half into the flight. There were three options for the main. Sausage and potatoes, a white wine and mushroom risotto, and fish option. 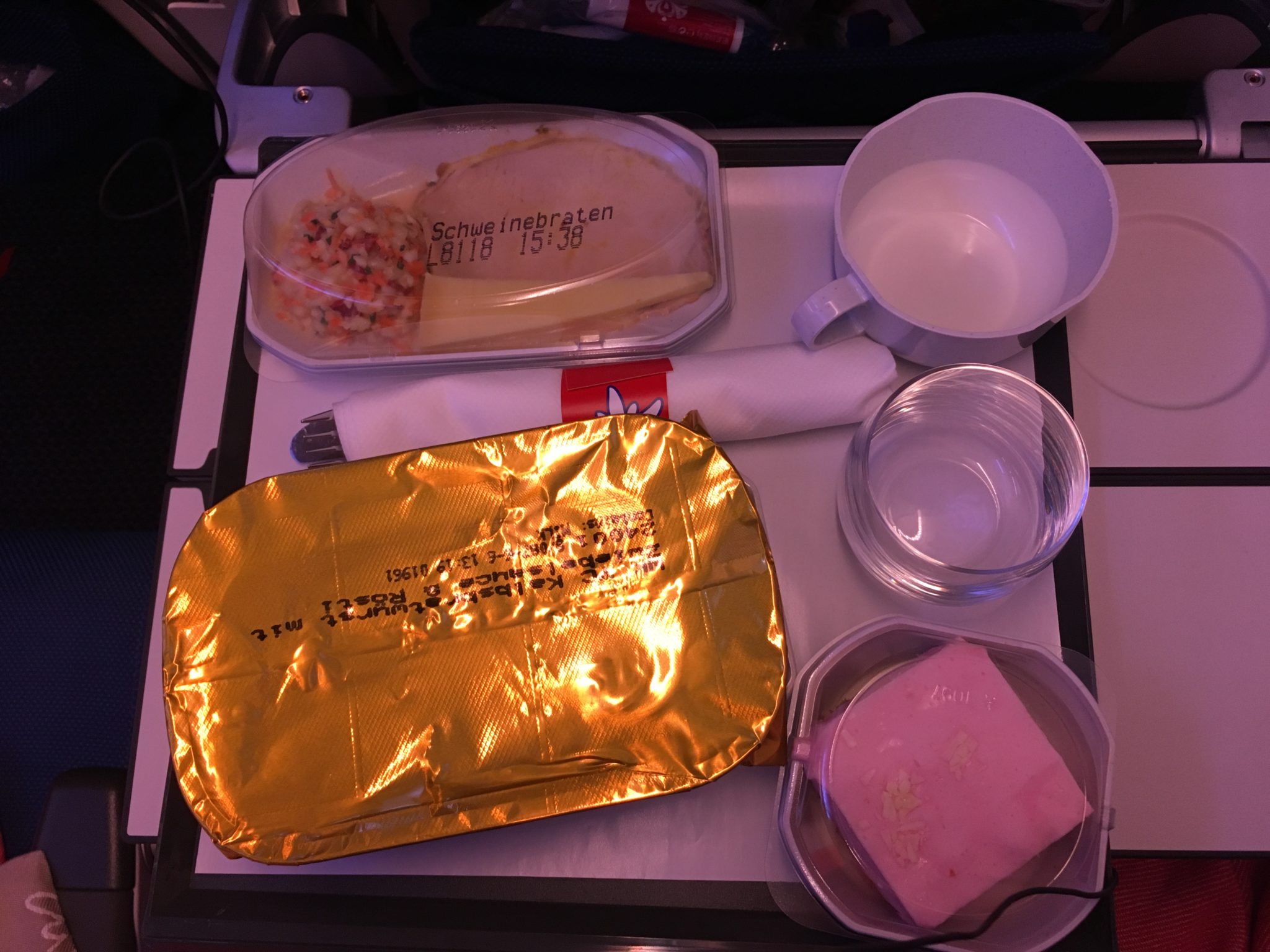 Both Mr Fluskey and I opted for the white sausage and potato. The white sausage tasted a little better than a cheap hot dog but I got a few bits of gristle which was quite off putting. The potatoes turned out to be three potato rostis which were a mushy. It is very hard to keep deep fried things crispy when they are contained. The whole thing was sitting in a tomato sauce which was somewhere between a passata and ketchup. It seemed naturally sweet from the tomatoes but it definitely suffered from being very boring.

With dinner there was delicious brown bread, so good that I had two pieces. I used the ham and cheese to make a tasty little open sandwich. I wasn’t a fan of the rice and veggie salad thing so I left that.

The strawberry mousse cake was very sweet but full of strawberry flavour, much better than most of the mousse cakes on planes I’ve had before.

In economy, unless you pay for economy max, customers have to pay for alcohol. Mr Fluskey and I both decided to stick to water and apple juice. It was probably the first time in years that we hadn’t had a proper drink on a long haul flight, but our bodies presumably thanked us. 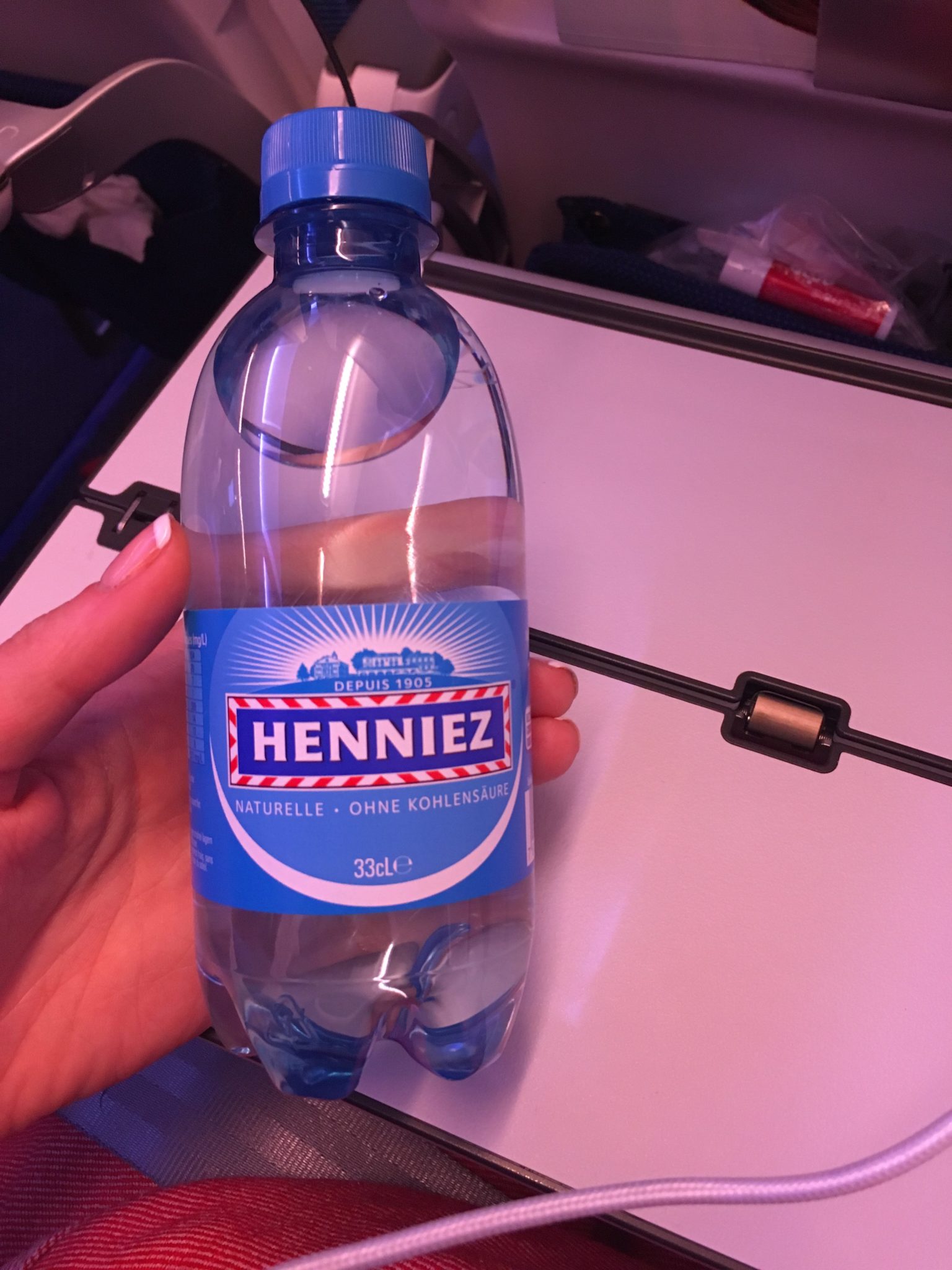 Just before bed, they handed out little bottles of water, which I always think is great, especially in economy.

As it was an overnight flight of nine hours, we got two meal services. Breakfast was very continantal which I enjoyed. I always feel a bit gross after a hot plane breakfast.

The dried beef was delicious, the ham fine, and I always love a bit of cheese. I made a apricot jam, and brie slice which was scrummy (another two bits of gorgeous brown bread). The square pot had some sort of cold muesli/porridge concoction that was my idea of texture hell, so I left that too.

The coffee it was served with was actually really good. Strong enough to give me a little perk up, but not bitter. 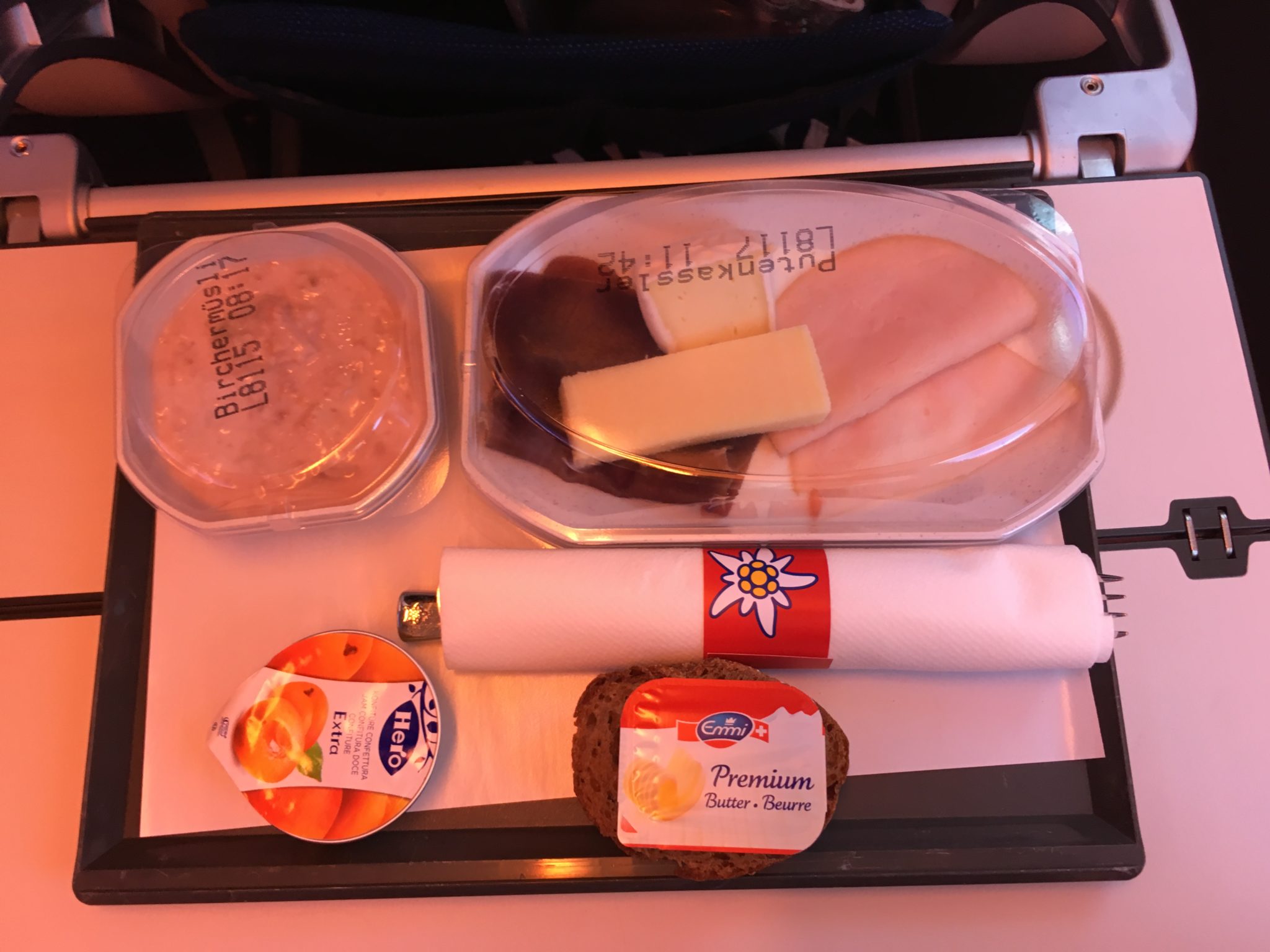 We hope our review of Edelweiss Air was helpful. We found flying with Edelweiss Air fine, but didn’t really have anything overly special about it. There were no defining points to encourage us to book it again over another airline.

The food left a bit to be desired, but as I’m sure you’ve gathered, the bread was fantastic! Beyond the food, back in normal economy, we felt slightly like our custom had been forgotten. The blankets weren’t good enough for an overnight flight, and the complete lack of amenity kit would be very annoying if we didn’t always pack our own version.

Flying via Zurich would be worth it if, like on this trip, it saved so much money. If, however, there was a comparable flight on another airline, I may choose the other one. 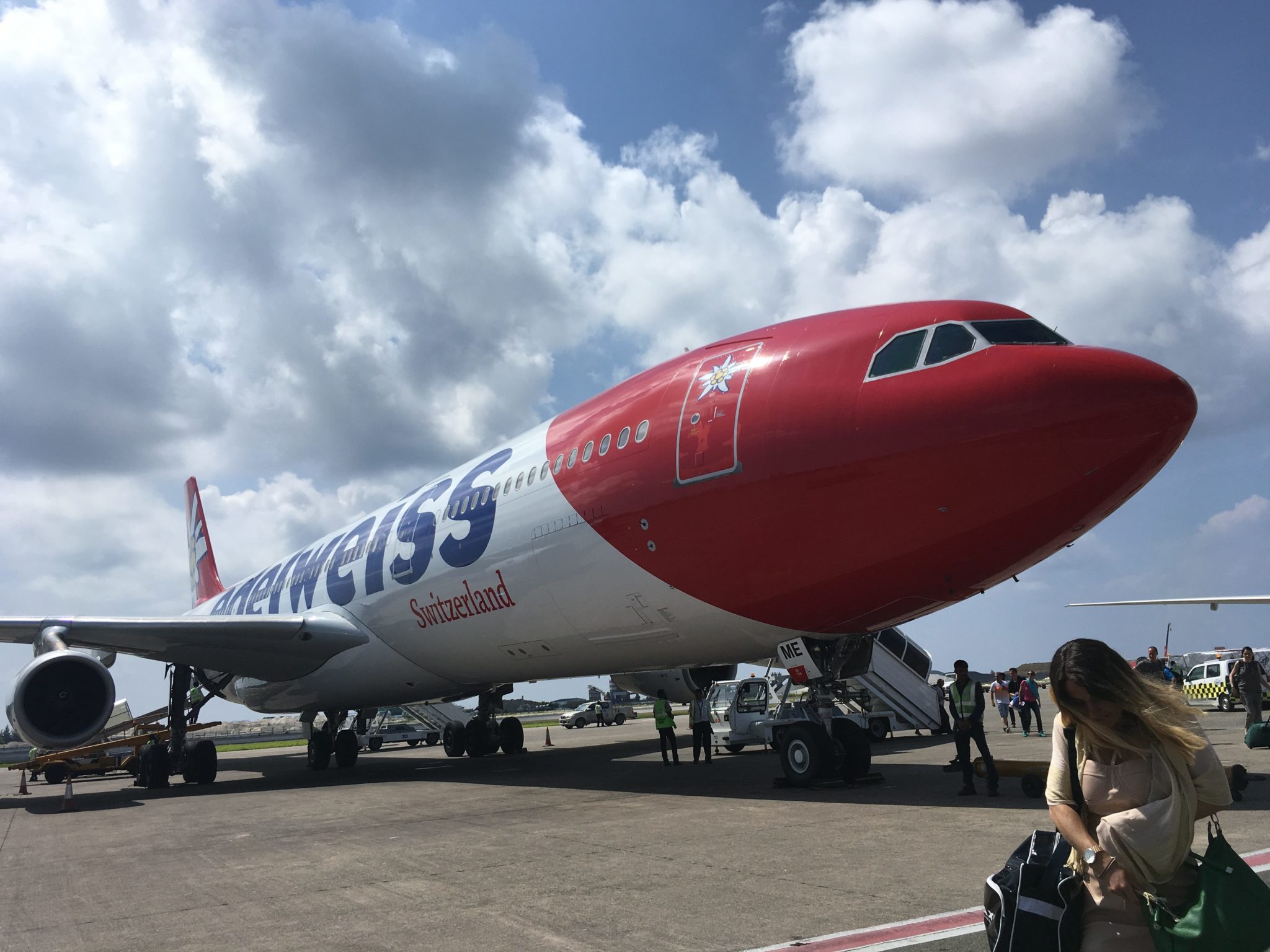