Our flight from Rome to Barcelona only took us about an hour. The Terravision coach from the airport into town took us slightly longer. Barcelona Girona Airport is very far from the city, I believe it is just called Girona by the rest of the world, but Ryanair is still promoting it as Barcelona. Luckily, I am not fussy and it dropped us off at a metro station so we could continue our journey nice and easily.

Living in London,  we are quite good at navigating with underground systems, but emerging into the sprawling station of Placa De Espana, we were baffled by the number of exits. A full ten minutes after arriving, we figured out the right direction and exited the station.
Booking a room in Barcelona had been surprisingly expensive. We had settled for a strange shared apartment a few streets over from Placa De Espana, that I booked through Hostelworld. The whole block smelt of deep fat frying, the decor was a collective smudge of brown and there was no reception to speak of.

It turns out, we had arrived right in the middle of La Merce, Barcelona’s largest festival, celebrating the Patron saint of Barcelona, Mare de Deu de la Mercè. Unfortunately, we had missed one of the biggest moments of the festival. It showcases the tradition of building huge human pyramids called castellers, or castles. These aren’t the ones we used to do in the playground, three layers of kneeling, squealing girls, but three or four tiers of standing men with people standing on their shoulders, topped by a standing child. Quite a feat.

The success of our Fat Tire tour in Berlin, inspired us to try it in Barcelona too. We didn’t regret it. We made our way through the throngs of people wandering slowly along the winding lanes of the old town, dinging our bells cheerfully.

The tour took in:

Honestly, these tours are wonderful. There was a particularly thrilling downhill section that led down from the bull ring. I skirted a roundabout, gravity pulling me ever faster, with the wind whipping my hair into a frenzy. It was truly invigorating. My lack of driving license means I don’t get to go very fast in life. Being in someone else’s car, or a bus, or train is never as fun as when you’re in control. In Berlin we had stopped at a beer garden, here in Barcelona we stopped at a bar on the beach. Sitting, overlooking the beach, and sharing jugs of sangria, our aching muscles relaxed fully.

We accidentally caught ‘the Parade of the Giants’. We went for dinner overlooking one of the squares in the old town and a parade of huge models came past. Women in peasant dresses, pious looking saints and men in strange robes bobbed past the window. Some of these models reached the widows there on the first floor. We scoffed our food and afterwards we squeezed onto the train to see the eagerly anticipated fireworks which were located, rather handily, right next to our hostel!

We sat waiting on the main roundabout of Placa De Espana, this has a bit of a slope and so we stood a chance of seeing (we are not tall). Swept up by the joyous atmosphere, I took my eye off the ball. We suddenly realised, the camera was gone. Some talented master thief (or cheeky little sod) had pickpocketed our Sony camera. I was gutted. If only there was a way I could find this person and just beg for the SD card full of our snaps from Berlin, Rome and Barcelona!

Trying to put it behind us, we settled in to watch the firework spectacular. It was immense! The whole display took about 45 minutes and it was all timed to music, some of which we knew and some we didn’t. There were thousands of people in attendance and everyone was singing along loudly. I never thought I’d hear a huge crowd of people all singing the Teletubbies theme tune in glorious unison. Buoyed up by this wonderful occasion, losing the camera seemed less of a disaster. 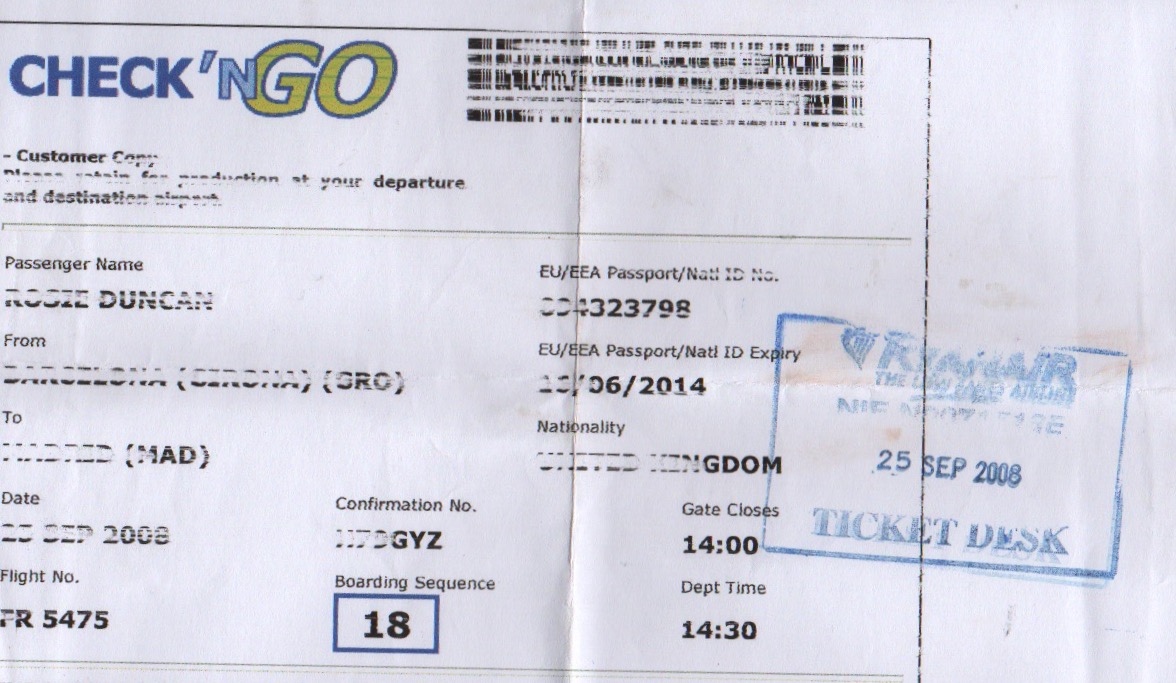 The next morning we had to get going, we were bound for Madrid.

(We are almost at the point in the trip where we managed to get some photos, but not quite.)