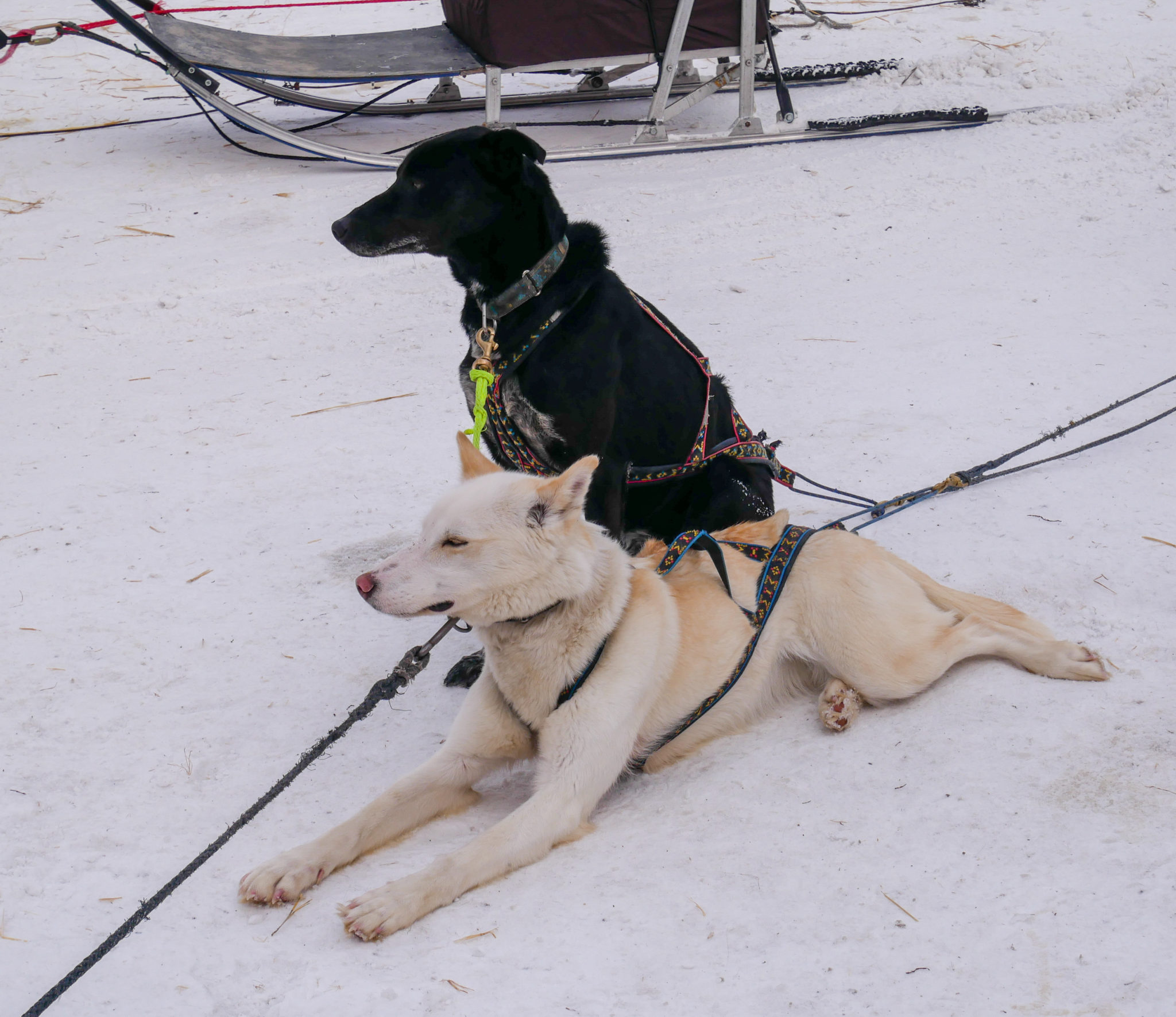 This post was written in collaboration with Real Russia who sponsored us for this excursion.

Lake Baikal is a large (very large) freshwater lake in Russia. Here are some quick facts about Lake Baikal:

In summer, small towns like Listvyanka that dot the shore are bursting at the seams with tourists. Fishing, swimming, boating and other waterborne activities are incredibly popular, but why on earth would anyone visit during winter?

During the coldest winter months, the lake freezes. In huge areas, the ice is so sturdy, that a road is built across the surface every year. At 75cm thick, it can support trucks up to 15 tonnes, and in some places it is up to 1.5m thick. The craziest thing? The ice is so clear that you can still see through it! Venture out on foot and you’ll have a fun but unnerving experience.

An entrepreneurial couple has taken the cold weather and turned it to their advantage, setting up the Baikal Dog Sledding Centre. It is a family affair with Oleg Tyuryumin, his wife and sons all having worked and lived at the centre. The family and their friends compete in dog sled races around Russia and sometimes further afield, so they really know what they are doing. The whole centre is run to support the dogs, keeping them happy and healthy. They really are the experts when it comes to dog sledding in Lake Baikal. 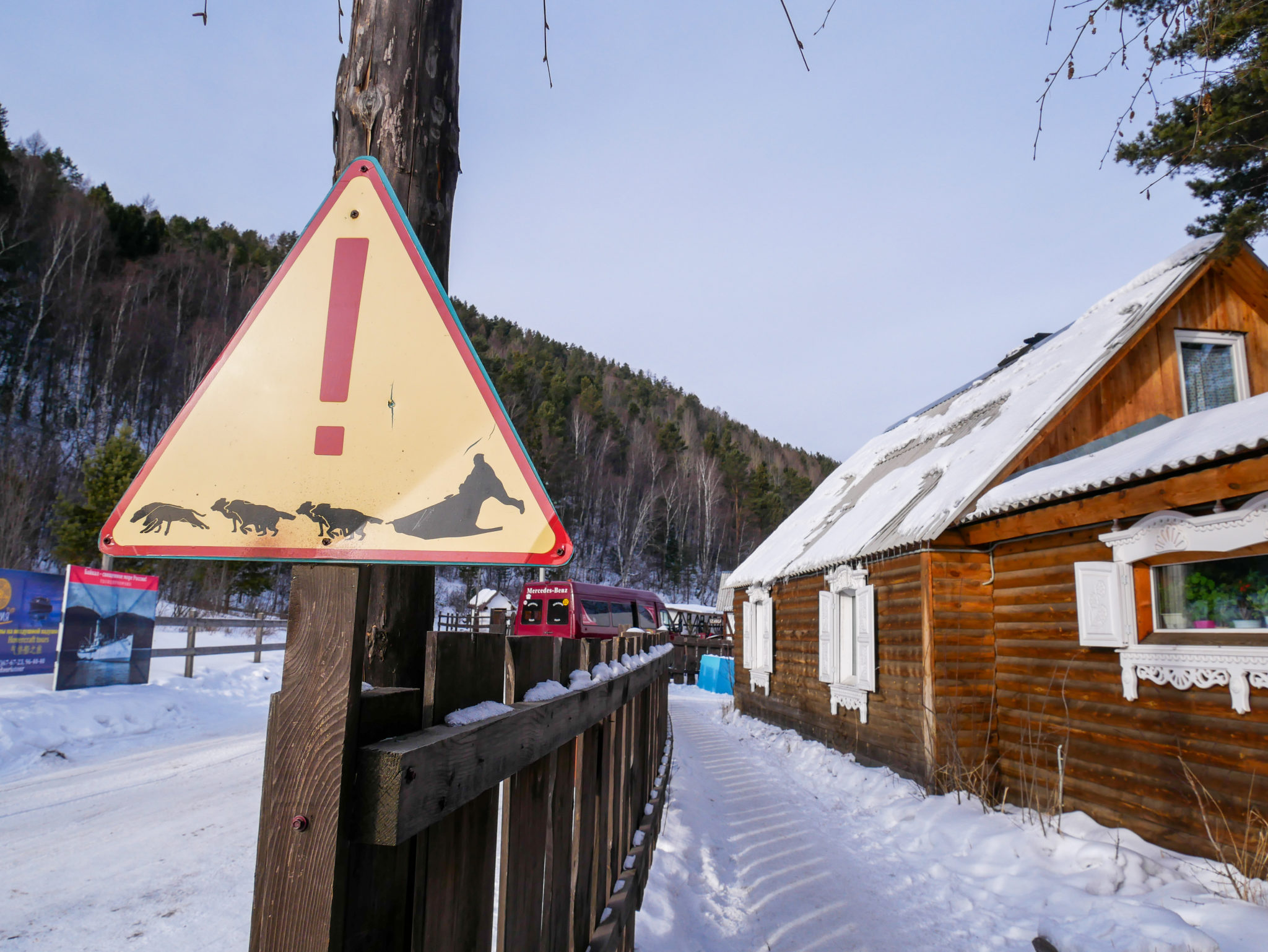 After an hour’s drive from the nearby city of Irkutsk, we jumped out of the car into the cold, crisp air. It was -6°C which might sound quite cold, but we were actually very lucky. Had we visited a few days before or after, we would have been in temperatures of -26°C to -36°C. Factor in the wind chill of being on a dog sled and that doesn’t make for a very happy Flying Fluskey!

We had wrapped up as warmly as we could. Heated gloves, hats, ear muffs, a lovely warm jacket, and several thousand layers of base layers, tops, tights and leggings. However, they insisted that we add a few finishing touches to ensure we had an enjoyable time.

Firstly, they added some overalls that were basically made of sleeping bag material, fashioned into a pair of dungarees. I could do with some of these for lazy days in front of the telly. Next, they swapped out our normal winter boots for a pair of HUGE moon boots. There was no denying that these were super cosy but mine were a few sizes too big (five sizes too big at least). 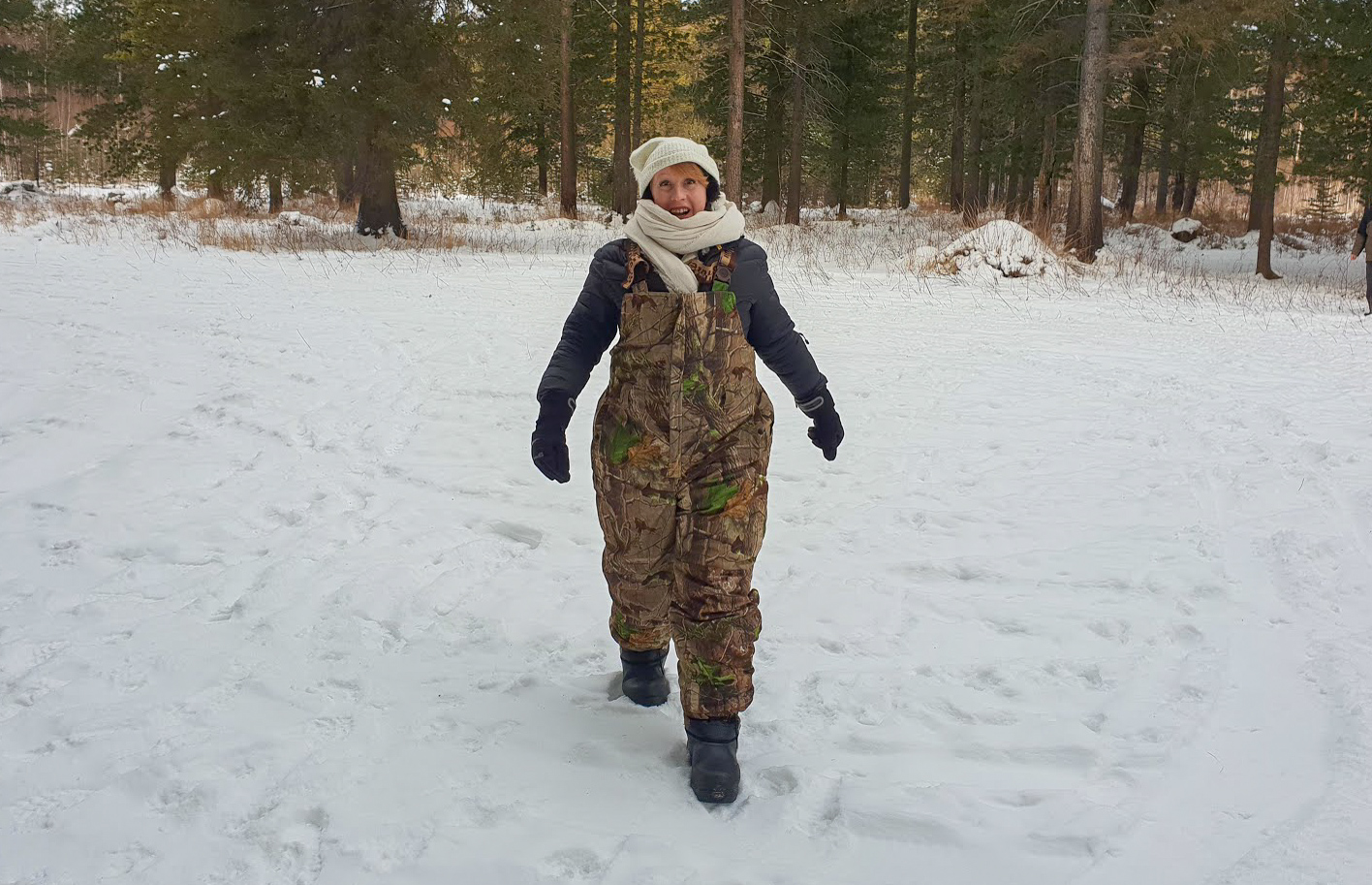 I thought it best to go for a wee before a bumpy session on a dog sled so I ran off to the small bathroom hut, tripping in my giant, squishy moon boots. There are three things you should know about this hut:

Basically, what I am saying, is that maybe dehydrate a tiny bit before you come.

I was expecting big, fluffy huskies but the dogs here are of different breeds. They ran out eager and twitchy. Steam rose from their muzzles as they barked and whined, straining at their reigns. Each sled had nine dogs to pull it along and after watching the dogs for a while, all of a sudden it was time to jump aboard. We had one each, with a driver behind us to steer and usher the dogs.

“Keep your gloves on”, they warned us, “Or your hands will freeze to the metal”.

Well, you don’t need to tell me twice. The metal was freezing, even though my thick gloves. Thank goodness my gloves had heating in them!

As soon as the signal was given, the dogs set off at apace and we were suddenly In fact, they are the experts when it comes to dog sledding in Lake Baikal, eek! We had been warned that the dogs would be faster at the beginning and they were so keen to get going and the sled set off like a rocket. It whizzed through the field of snow and towards the woods. When we first booked, we thought we would be going out on to Lake Baikal but the excursion was bound for the forest. 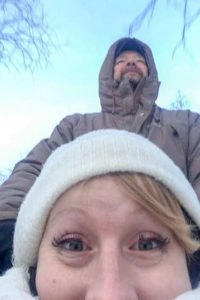 The sled bounced and bumped over the snow. I was sat on a large pile of boxes, covered with a tarp, and so it was relatively cushioned. Mr Fluskey just had a wooden baseboard so I can only imagine he got rather spanked. The snow whipped behind us and flicked up from the paws of the racing dogs. The cold air bit at my nose as it whistled through my ear muffs. I loved the bumps and turns; flying over the paths felt just the right amount of thrilling.

Overhead, the snow-capped trees loomed dark against the blue sky. Some birch trees were bent almost double as a result of the snows and icy winds. They created magical tunnels for us to race through. It was in the familiar landscape of trees and snow that we had become used to on the train but from a very different angle.

After about an hour of swishing through the snow, the dogs needed a break and my bum had gone rather numb. The party pulled up in a clearing somewhere near the bottom of Cherry mountain. Our drivers set up a campfire and started preparation for cooking dinner. I realised that I had been sitting on all of the equipment and food on my sledge. THAT’S why I had a different seat from Mr Fluskey!

We wandered off to explore the surrounding Taiga forest but the snow was snow deep that we were soon back and decided, instead, to get to know our doggy jet engines.  Both of us had the mixed breed teams that they call Baikal or Kamchatka Huskies. I am a bit nervous of dogs and so it took me a minute to pluck up the courage but they were all incredibly relaxed and mild-mannered. 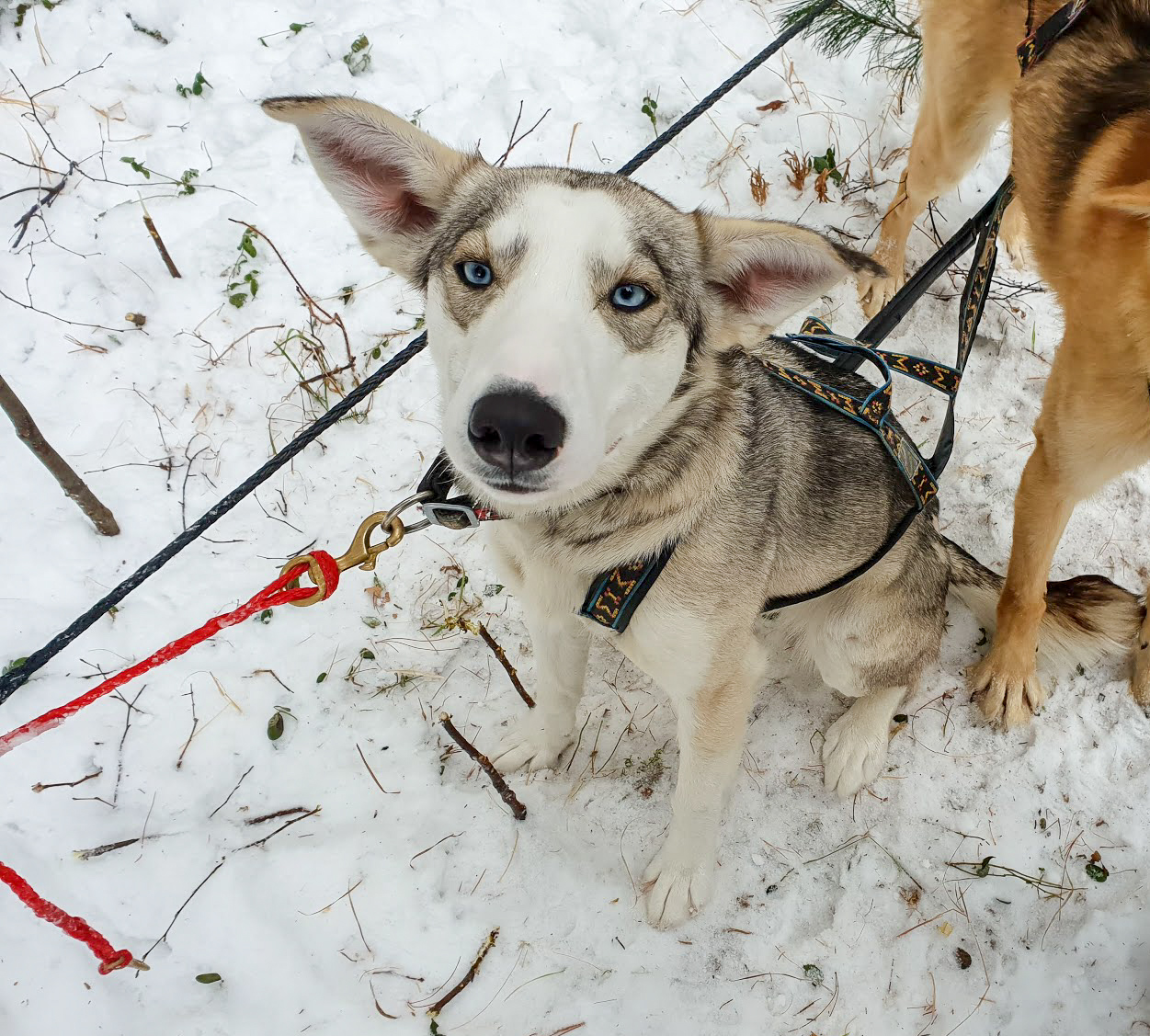 We had no clue what we were going to get, but we were very pleased. The chaps prepared a big, steaming pot full of pelmeni (Russian boiled meat dumplings). Up to this point of our journey, we had tried a few different kinds of dumpling, and the excuse to eat another one was more than welcome. They had a tomato sauce that tasted a little like it had pickle water in it to mix in with it. It was very tasty and the heat was more than welcome.

We also had nice, thick slices of ham and sausage and hearty slices of rye bread. Alongside the fiery Russian mustard and red pepper sauce, we had the things to make open sandwiches. It was cold enough that the ham started to freeze while it sat on the table. 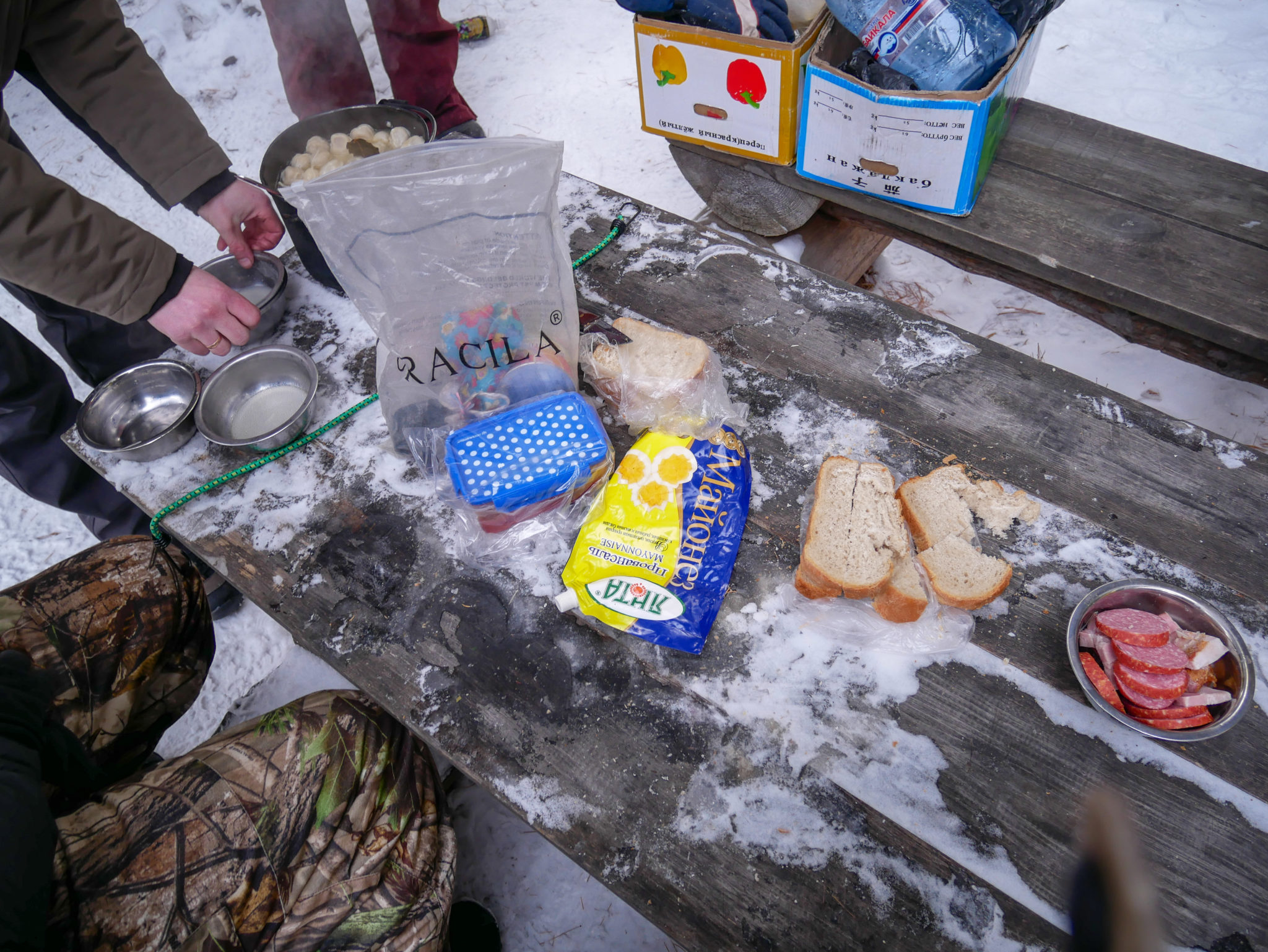 The tea that they brewed was a local herbal variety. It was really tasty and they couldn’t translate what was in it, but we gathered that everyone has their own recipe.

It was a simple but very satisfying meal.

Back on the Dog Sled

After my sled was packed up again, it was time to pop myself in place. This was a much shorter run back to the camp and the dogs had their energy back. We sped back in top gear until we got near camp. A group of snowmobiles were coming the other way and they didn’t move out of the way very well. We had to squeeze by and being at such a low level, the engine fumes were choking. I snuggled deeper into my scarf to cover my mouth. My driver was furious with them.

It was all over in a flash and we had to jump off at the finishing point. I saw Mr Fluskey coming around the bend into the dog sledding centre, but hang on…he was driving!! Mr Fluskey was offered the chance to “drive” his sled. I couldn’t help but wonder if he was offered because he was a guy, or just because we had different drivers.

If you are considered dog sledding in Lake Baikal, here is some information that you might like to know: 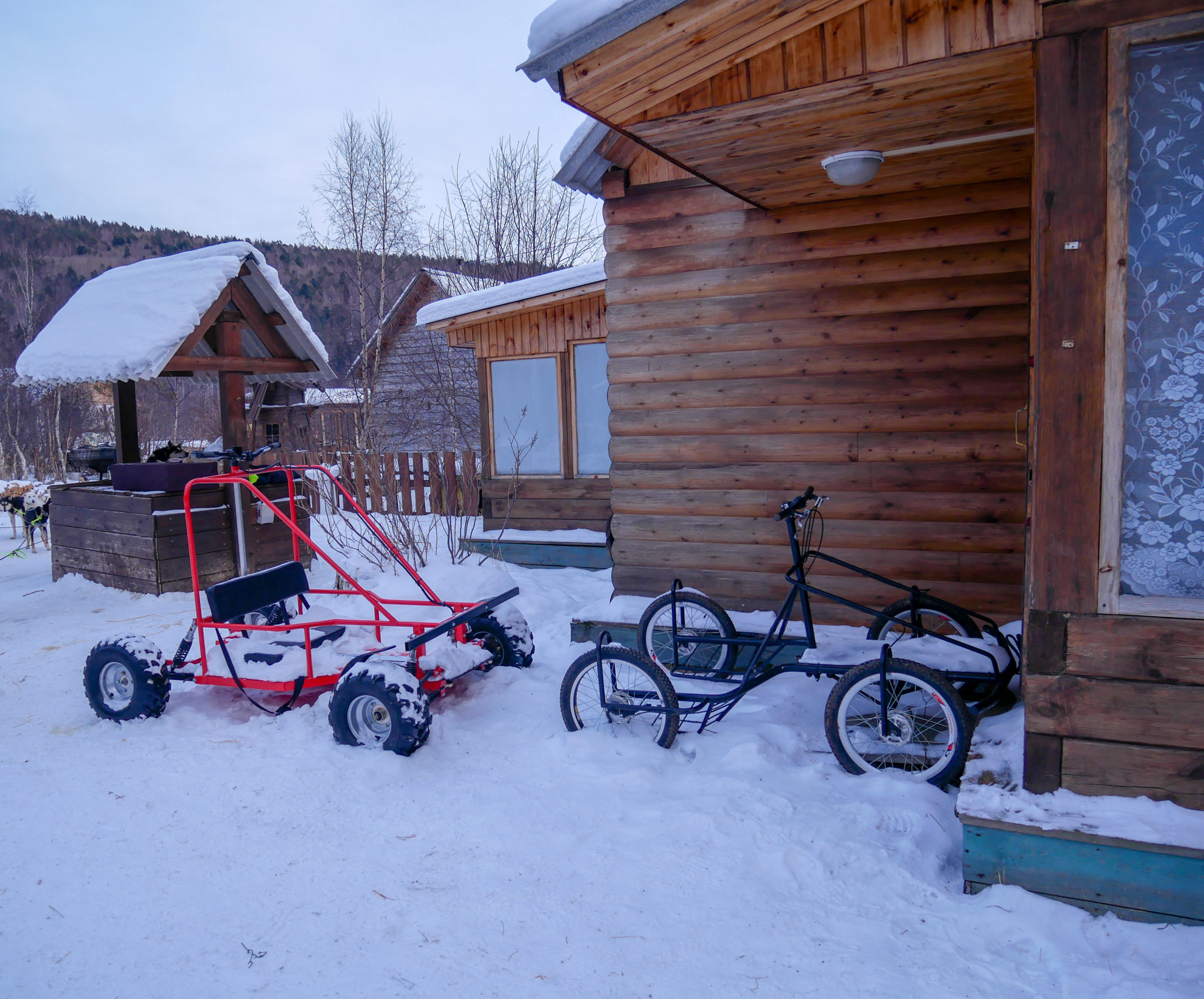 Still need your Russian visa? Check out our post all about Real Russia’s visa services.

Being a little scared of dogs, I was a bit worried about dog-sledding, but I had a wonderful time. I am incredibly glad that the weather wasn’t completely freezing, as that scared me too! I thoroughly enjoyed my dog-sledding experience and I would definitely have another go, especially as Mr Fluskey got to drive his and I didn’t. Maybe I will one-up him by renting a snowmobile next time! 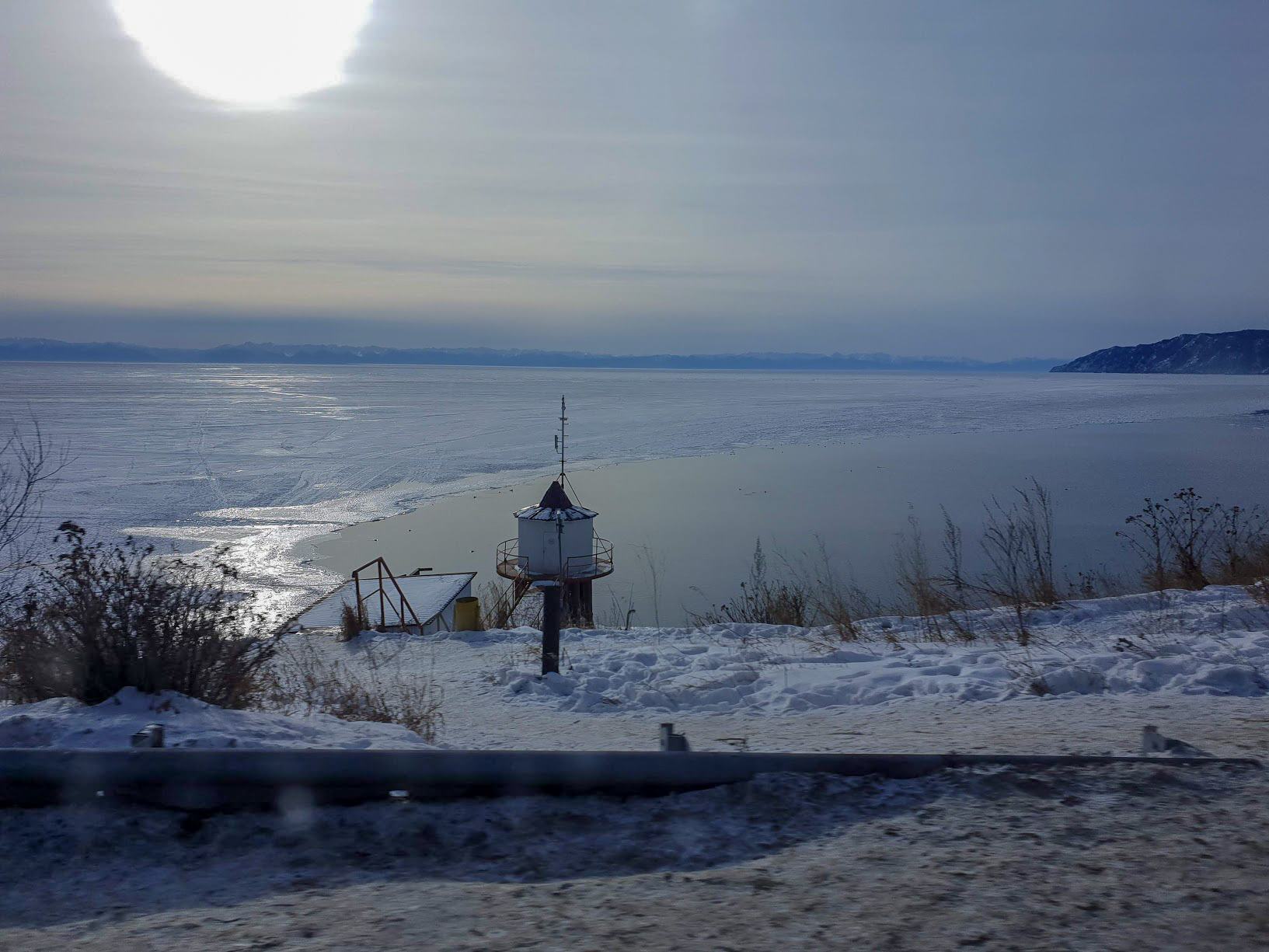