Afternoon tea is as British as queuing and discussing the British weather (but a great deal more pleasant than both). Mr Fluskey and I have enjoyed a fair few three-tiered, mid-afternoon teas here in London, but opera afternoon teas is a little bit special. Along with the cakes and camomile was a fine singing performance! Here is our review of opera afternoon tea at the Royal Albert Hall.

In 1871, construction was finally completed on a very special building. Originally the brain child of Prince Albert (husband to Queen Victoria), it was to be a venue for arts and science. Over the last 150 years, The Royal Albert Hall has seen shows from classical concerts to dance shows, TED talks to rock gigs; even a marathon and a sumo wrestling match!

As well as the main auditorium shows, there are other performance spaces around the building. The Elgar Room and Verdi restaurant are just two of these.

Opera afternoon tea is served in the Verdi restaurant. Usually an Italian restaurant (and a pretty good one at that) it is transformed with perfect white tablecloths and fine white tea sets.

The Royal Albert Hall hosts many afternoon teas. You can take a tour that ends with a spot of tea, or just pop in Tuesday to Sunday at tea time. However, if you are really lucky, you can get yourself a ticket to a very special event. Along with the clink of spoons on crockery, and the gentle splash of tea through strainers, wonderful arias and jazz standards fill the air. 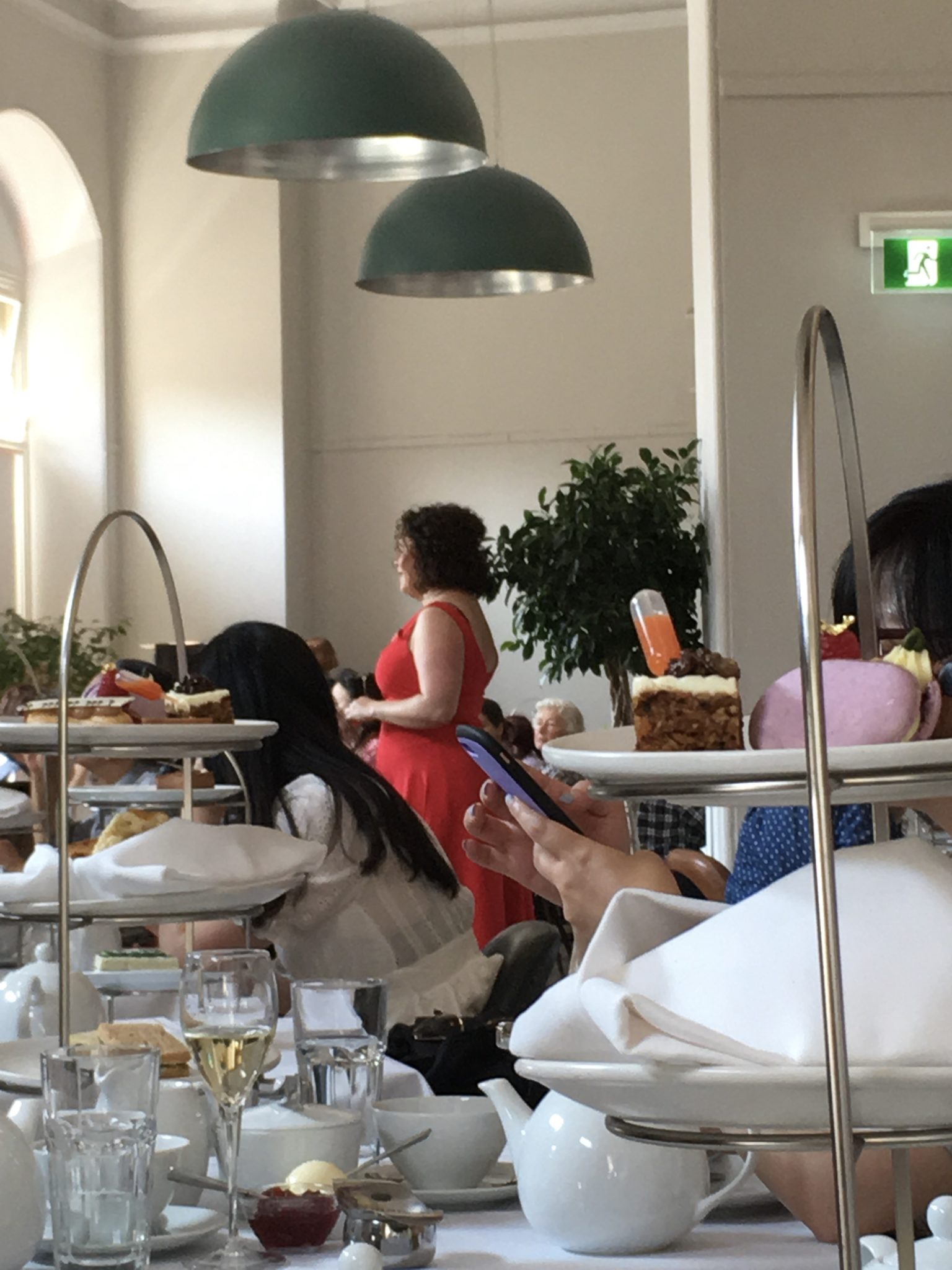 Looking for other great things to do? Read our articles on Loving London for walks, fesivals, food and more!

Performing on the day we took opera afternoon tea was singer Naomi Kilby and pianist Elspeth Wilkes. Naomi’s soaring soprano slipped seamlessly from the lush lullaby of Gounod’s Romeo and Juliet, through the thrilling trills of Mozart’s Marriage of Figaro and finally to the lighthearted lyricism of Gershwin. She introduced each piece with a small summery of the story, putting all the music into context which was a really nice touch. It made it a lot more accessible to those of us who didn’t know all of the operas.

All the while, she was accompanied by the delightful Elspeth Wilkes whose playing was flawless. She had a solo moment when she performed The Marriage of Figaro’s overture. I think she absolutely shone with humour and passion.

There was a pretty good selection of teas. Apparently, I am adventurous as I opted for the green tea. Mr Fluskey can’t bear tea so our buddy Ruth took the hit for him and tried the Earl Grey. The green tea was subtle and had lovely hints of honey. Plus, isn’t it great fun to use a proper tea strainer.

As it was a Saturday, we were in an Italian (and I’m kind of a lush) I also got an Aperol spritz. They are really good here so if you ever come to the Royal Albert Hall for a show, be sure to get one!

This is usually the least exciting part of an afternoon tea. However, at the Royal Albert Hall they have mastered the art of novelty in the sandwich arena!

I swapped my egg mayonnaise for Mr Fluskey’s ham and mustard so I can’t comment on that, but the others were fun and tasty. The swirled ham and mustard really tickled my fancy. The smoked salmon was really enhanced by those little vinegar caviar pieces. The star of the show for me though, was the cucumber finger sandwich. The mint cream cheese gave it a wonderful freshness. 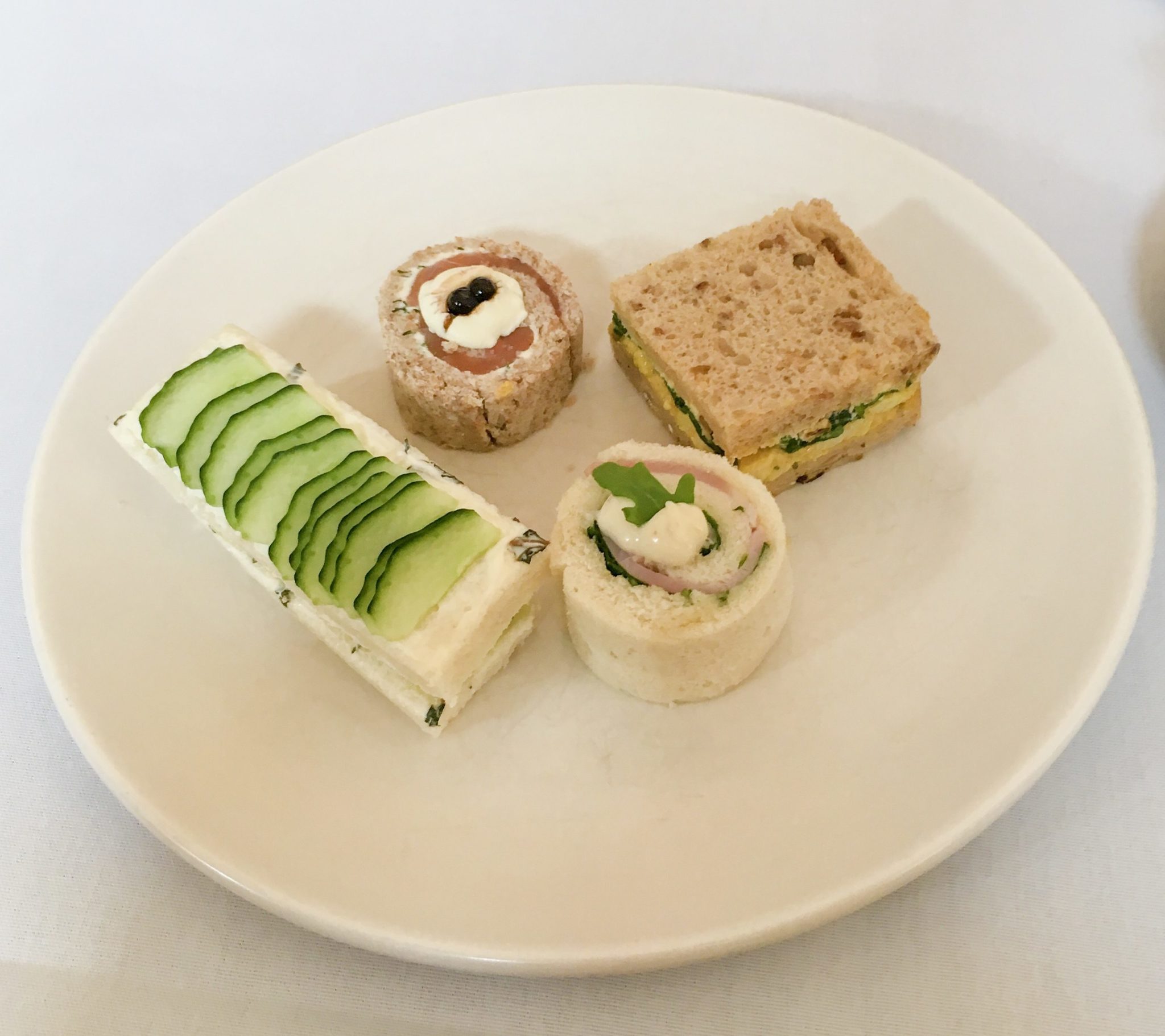 Check out all our foodie adventures and tours

Wrapped in a linen tablecloth came four huge scones; two plain and two fruit. Scones make up a third of an afternoon tea, and the whole food component of a cream tea. Either way, you are probably going to eat two. This is where I always mess up at afternoon tea. I can’t help but eat those crumbly, cream-covered cakes…and they are SO filling!!

“What is the fastest cake in the world?”

Ruth grew up in Devon and so she almost had a fit when I put the jam on my scone first. I never normally do this, but thought I’d give it a go. In Devon this is sacrilege, whereas in Cornwall, it’s how things are done. The second time around, I went back to the way I usually do things, and the cream went on first. 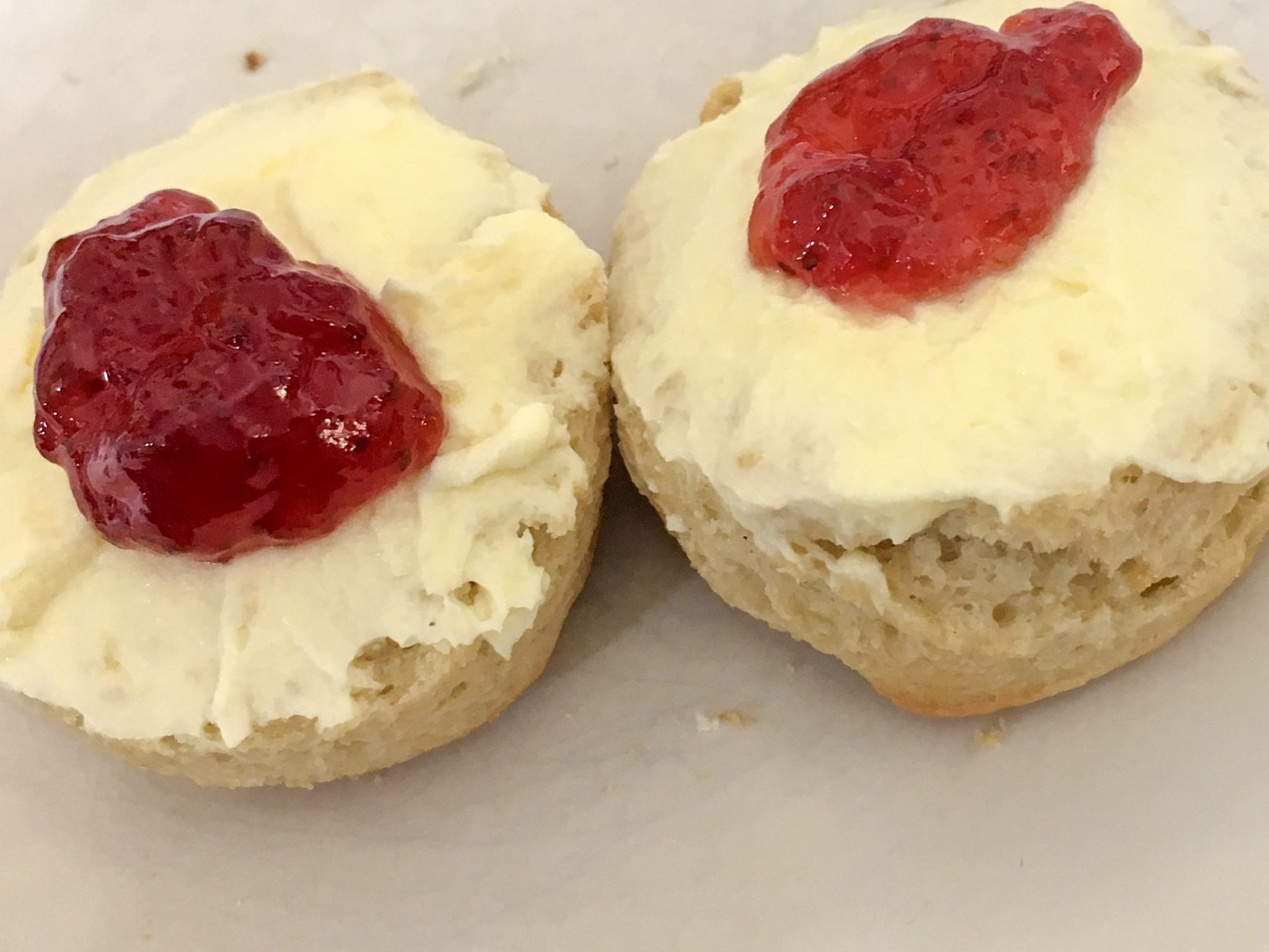 Both scones were well made and beautifully risen. My favourite was the fruit scone, which had succulent sultanas in.

The only bad point, we had to ask for more cream. This made us feel like piggies, but other people said they had done the same.

This is always the prettiest part of the afternoon tea. It is also the hardest to split between two. It requires laser-like precision when dividing the goodies. Woe betide Mr Fluskey if he gives himself more cakey yumminess than me!

I thought the selection of delicate little cakes was good. There was an interesting mix of styles and flavours. I think that the cake course needs to surprise and delight the eater. 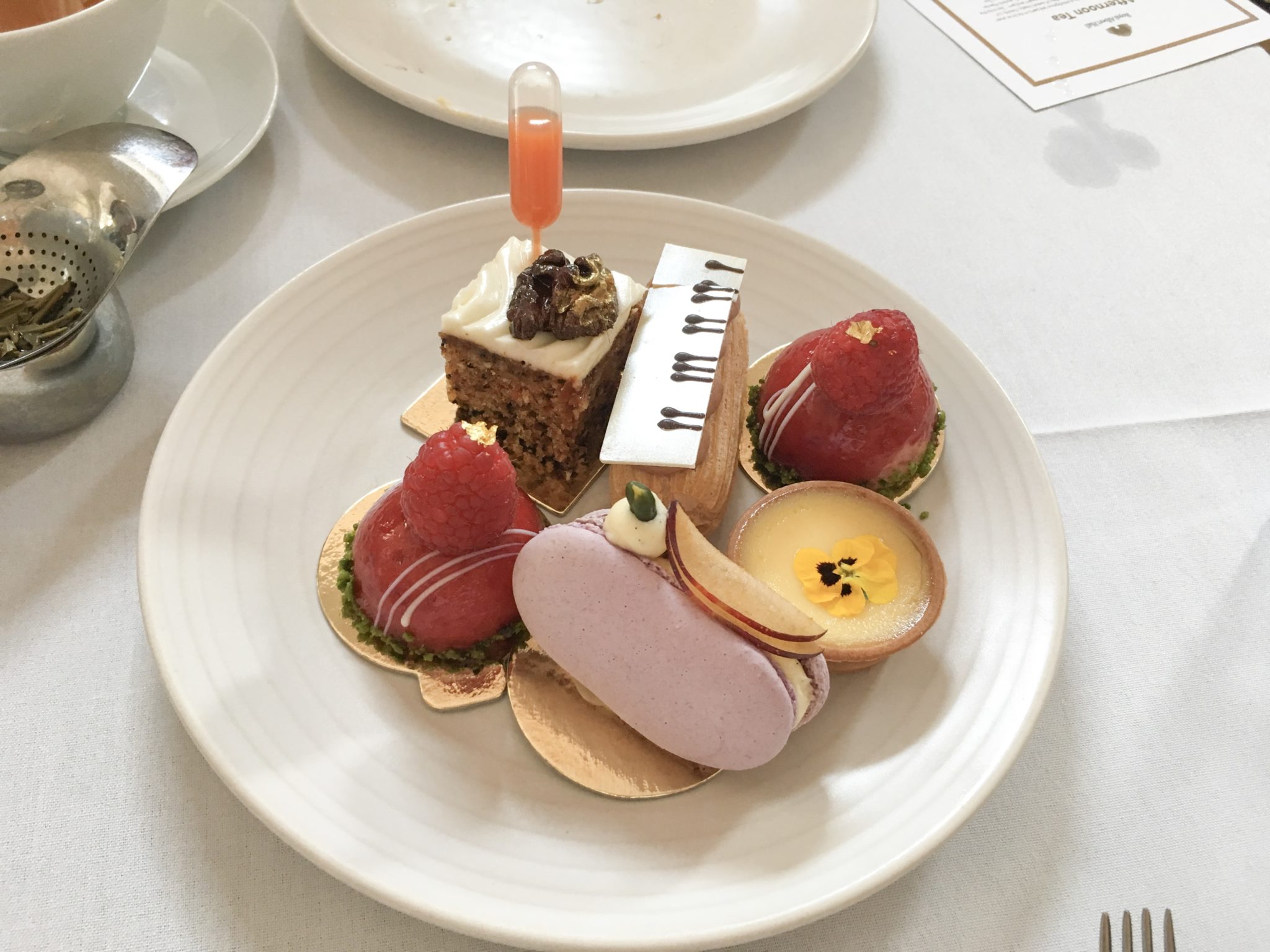 I found the little red domes disappointing. They had a finish that suggested mousse and layers, but only delivered slightly dry cake. The rest were great and I had two favourites.

We always forget that we can take food away from an afternoon tea, and so the last five minutes are spent finding little spaces for just ONE more cake…and then just ONE more!

Can’t get enough food? Read Eat your way around the world in SoHo

Thinking of taking an opera afternoon tea at the Royal Albert Hall? Want to learn more about the performers? Here’s some things you might like to know: