After our disastrous first day trying to get into Berlin (seriously, it was a nightmare and you can read about it here) we had to see as much of the city as we could in 3/4 of a day.

Being our first time in Berlin, there were so many fun Berlin activities to choose from! We decided to try and see as much of the city as possible so we opted for a bike tour. We jumped on the U-Bahn from our hostel to the TV Tower and the Fat Tire bike shop that resides beneath it. With our flight in the evening, we wanted to see as much of Berlin as possible without getting on a tour bus.

The tour was fantastic! It definitely deserves its rating as the best outdoor activity on Tripadvisor. We took their standard bike tour but they now offer several different routes, as well as e-bike and segway tours.

The official tour bikes were a little too big for my 28 inch legs and they had already given the kids the smaller bikes (the cheek!). They had to get a special bike out of the window for me. It had Californian brakes which are activated by pedalling backwards. It makes you feel very smooth, but my habit (developed over 20 years) of kicking my pedals backwards while waiting for lights to change, made moving away from every set of traffic lights a challenge.

The last seventy years of Berlin’s history have been turbulent and bloody, and can be quite bleak. However, our guide was incredibly funny, very knowledgeable and looked out for everyone on their bikes expertly.

I think I’ve explained that I’m a bit of a dark tourist, and with that in mind, here are my highlights of the tour:

If you look down at the pavement in BebelPlatz you will see a glass area that allows people to see the room beneath. Huge, empty, brightly lit shelves descend below the viewer. This piece of art called ‘Library’ commemorates the huge book burning that took place by the Nazis in 1933. They burnt books by intellects such as journalists and philosophers that threatened their ideologies, the books numbering about 20,000.

The Berlin Wall is almost the world’s most famous, after the Great Wall of China (and let’s see what happens with Trump’s big idea). For almost 30 years after WWII, it acted as the barrier between capitalist Western sections of the city, and the communist section in the East. Berlin existed as an island of capitalism in a sea of the Soviet occupied East Germany. It was (until the Wall was erected) an easy place to defect to the West. Sections of it remain standing throughout the city, some emerging as places to share amazing street art, some maintained for posterity.

Checkpoint Charlie, checkpoint C, was one of a handful of crossing points along the wall, but the only one that foreigners could use and so it became the most well known. It became infamous in 1961 when tanks from each side faced off against each other for almost a week over a diplomatic argument.

These days the checkpoint area is a bit of a tourist hot spot and does feel a little like a theme park. You can get your passport stamped with all the old border crossing stamps for a few euros. I didn’t on this trip, but on a subsequent visit, I gave in to my addiction and paid up. (I have said if I were ever to get a tattoo, it would be a passport stamp).

The tour guide whipped out a piece of chalk and drew some diagrams on the pavement. She showed us how Berlin was carved up into sections; American, British, French and Soviet, and explained how the city worked.

The area does have some excellently informative boards and the nearby Mauermuseum that I haven’t been to personally but I hear great things about. One of the boards showed the varied means of escape of people who managed to cross the border. It was quite poignant and I found it tricky to tear myself away. Maybe I am just a history geek but I find it truly fascinating and think it’s well worth reading about.

We stopped quickly to look at one of the original watch towers. Around 500 towers dotted the Wall to observe the area and anyone who they thought was acting strangely. Set at regular intervals of about 300 metres, these contained two GDR guards at all times. Not, as you might think, to look both ways, or to nudge the other awake, but to shoot the other guard if they made a break for it. What a horrible thought. We learnt about how the area was constructed. Two great walls with a no mans land, called the death strip, in between. Mines, barbed wire, ploughed earth, sometimes kilometres wide, and dogs all added to escapees struggles.

Inspired by this trip I got hold of Stasiland: Stories from Behind the Berlin Wall. It was a really great read written by someone who was trapped living in East Berlin. She shares first hand experiences of the walls appearance, escape attempts successful and otherwise, and the paranoia felt by the residents of the German Democratic Republic.

Built in the late 1700s, this is one of Berlin’s most iconic images. Atop a large columned structure rides the Goddess of Victory in a chariot, pulled by four galloping horses. The Berlin Wall ran just in front of the monument, but citizens of the East were still drawn to it. A viewing platform allowed them a glimpse of their counterparts in the West. It was from here that US President Ronald Reagan’s famous words

“Mr Gorbachov, tear down this wall”

echoed across Berlin and the world. Since the Wall’s destruction, it has been seen as a symbol of unity. 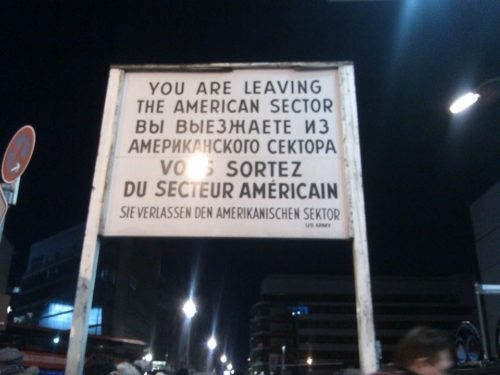 Germany’s government building is most definitely imposing. Its grand stone facade spreads across the top of a great lawn, and is topped by a huge glass dome. It was built in 1894 and housed the German government until a fire tore through it in 1933. During Germany’s split it lay unused and half halfheartedly refurbished. When Germany reunified in 1990, real work began on bringing it back into use and constructing a new dome. Finally finished in 1999, the government moved back in.

The great dome has views across Berlin and can be visited by registering on the website. It isn’t just to give a great view of the city though, it represents the transparency of the government. The dome has a great mirror in the middle so the public can see the entire debating chamber below. It’s elevated position shows that the public are more important than the government.

The Holocaust memorial/The Memorial to the Murdered Jews of Europe

A huge number of grey blocks lies across what appears to be a flat area. But, wandering between them, you soon find yourself descending towards the centre. The blocks become five, six, ten foot tall and tower above you. It can feel a little disorientating. Whilst not the most graphic monument I have seen to the holocaust, it does allow you to stop and think in your own way.

The memorial is currently at the centre of a controversy;
This YouTube video explains the “Yolocaust” art project.

I can attest to people jumping over the blocks and generally forgetting its significance, seeing it as a cool piece of architecture to interact with. We may well have done it too when we returned with a larger group of friends, carried away with its interesting structural design. 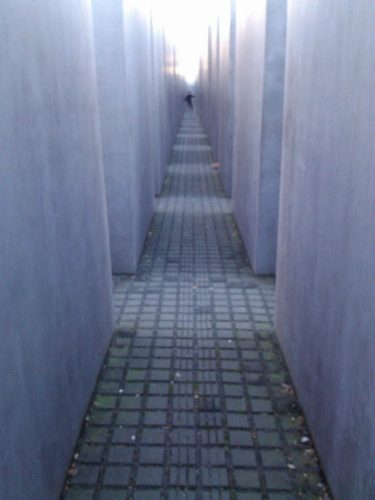 The Car Park (no, really)

We pulled up to a section of gritty concrete. Puzzled we observed the guides wry smile, “Welcome to Hitler’s bunker”. It turns out we were stood above the remains of Hitler’s famous bunker, where he and Eva Braun ended their days, as the Soviets approached Berlin.

Halfway through the day we stopped in a biergarten in the Tiergarten. Karl and I both dislike beer but we loved the meatloaf that they were selling. We even forced down bright red kinderbier as the peer pressure from our fellow tour-goers reached a fever pitch.

Back at the TV Tower, we boarded a pleasantly punctual train from Alexanderplatz Bahnhof back to Schönefeld Airport and our flight to Rome, (the one EasyJet flight on our speed tour of four countries in ten days).

(Disclaimer: Our camera was pickpocketed later on in this trip, in Barcelona. So there are very few photos, and those i do have, I’ve had to steal from another trip to Berlin and Abi’s most excellent collection).