Hot air ballooning is big business in Cappadocia. Since the first balloons ascended in 1989, the sunrise has always been greeted by these seriously picturesque additions. We were utterly determined to take our turn in the sky, as it is undoubtedly the most extraordinary way to see Cappadocia, and we booked to fly with Turquaz Balloons on our second day in Turkey. Read on for our full Turquaz Balloons review. 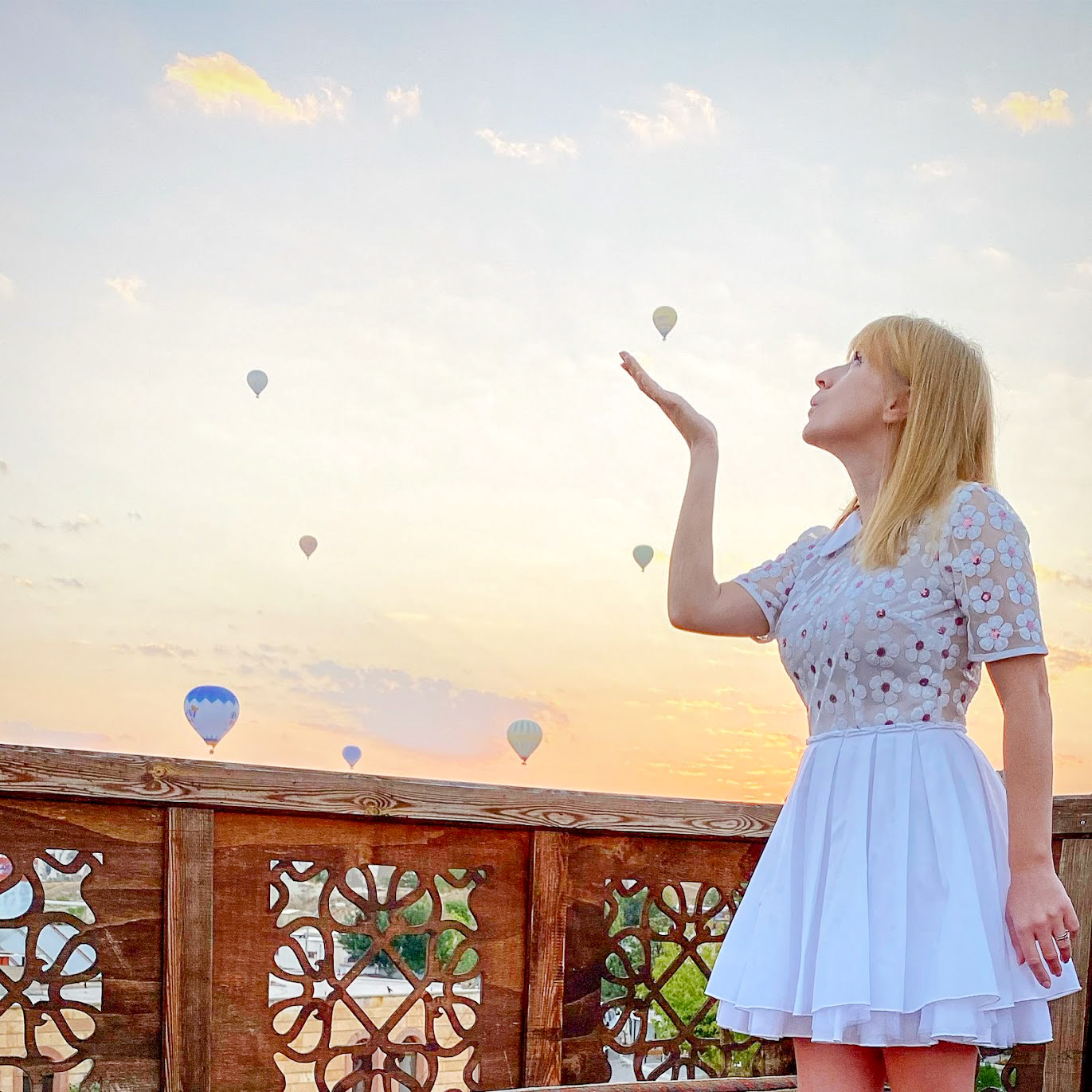 Our balloon flight was sponsored by Turquaz Balloons but all opinions are entirely our own.

There are very few reasons that I will accept for a 04:15 alarm. Early morning flights….and the chance to take to the skies above Cappadocia.

OK, there are only two reasons and they are both flights.

So, the alarm bleeped bright and early and we grabbed our prepared outfits (super organised, I know) and I slapped on some makeup. The pick up was prompt and arrived at 04:45. I am not sure where half an hour went!?

The minibus drove us to the nearby Turquaz Balloons review office, which is also the Kelebek Travel Agency. On arrival, we all signed our names and were given a note of who our pilot was to be. I think we were divided by language as our trip companions were all English speakers. 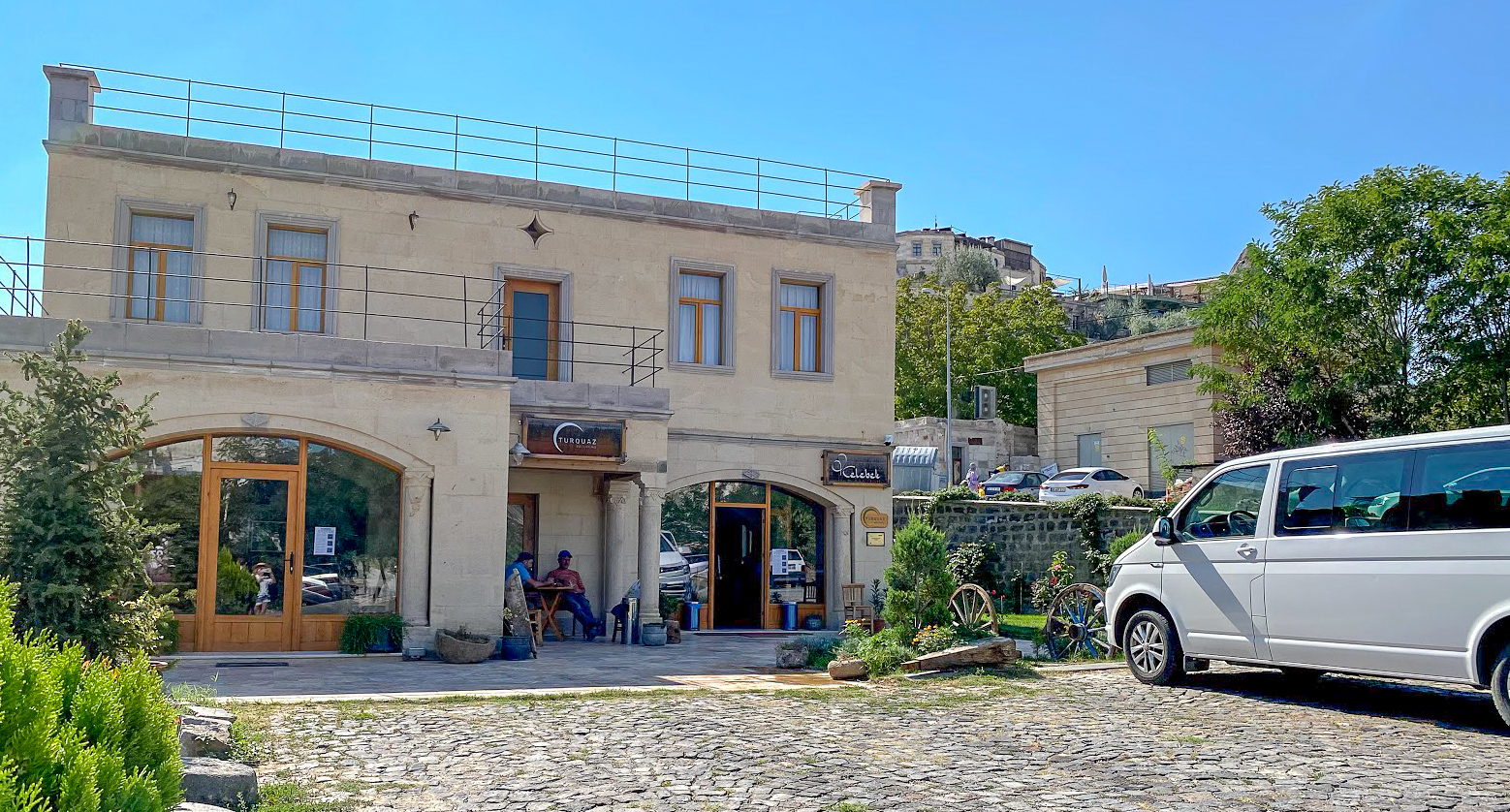 There was a small spread out for breakfast, all wrapped for protection. Lots of tea, coffee and some delicious juices were on offer, alongside baked goodies and fruit. I was nervous about drinking too much liquid but luckily, there was a bathroom down the hall for all those last-minute worriers like us. We tucked in, grateful for the sweet, sugary treats and their awakening powers.

We arrived balloon-side while it was still dark. Everyone clamoured to get their photos, some people lending their phones as torches whilst others snapped away. The balloon was being filled with huge fans, readying it for the flames that came soon after. It was almost too quick, that it went from the ground to upright. Blink and you miss it.

Our group was made up of just four couples, and in turn, we climbed a small step ladder into our respective corners. We had plenty of space and I basked in the intense jets of fire, as Mr Fluskey cowered away, not feeling the need to warm up like I always do. 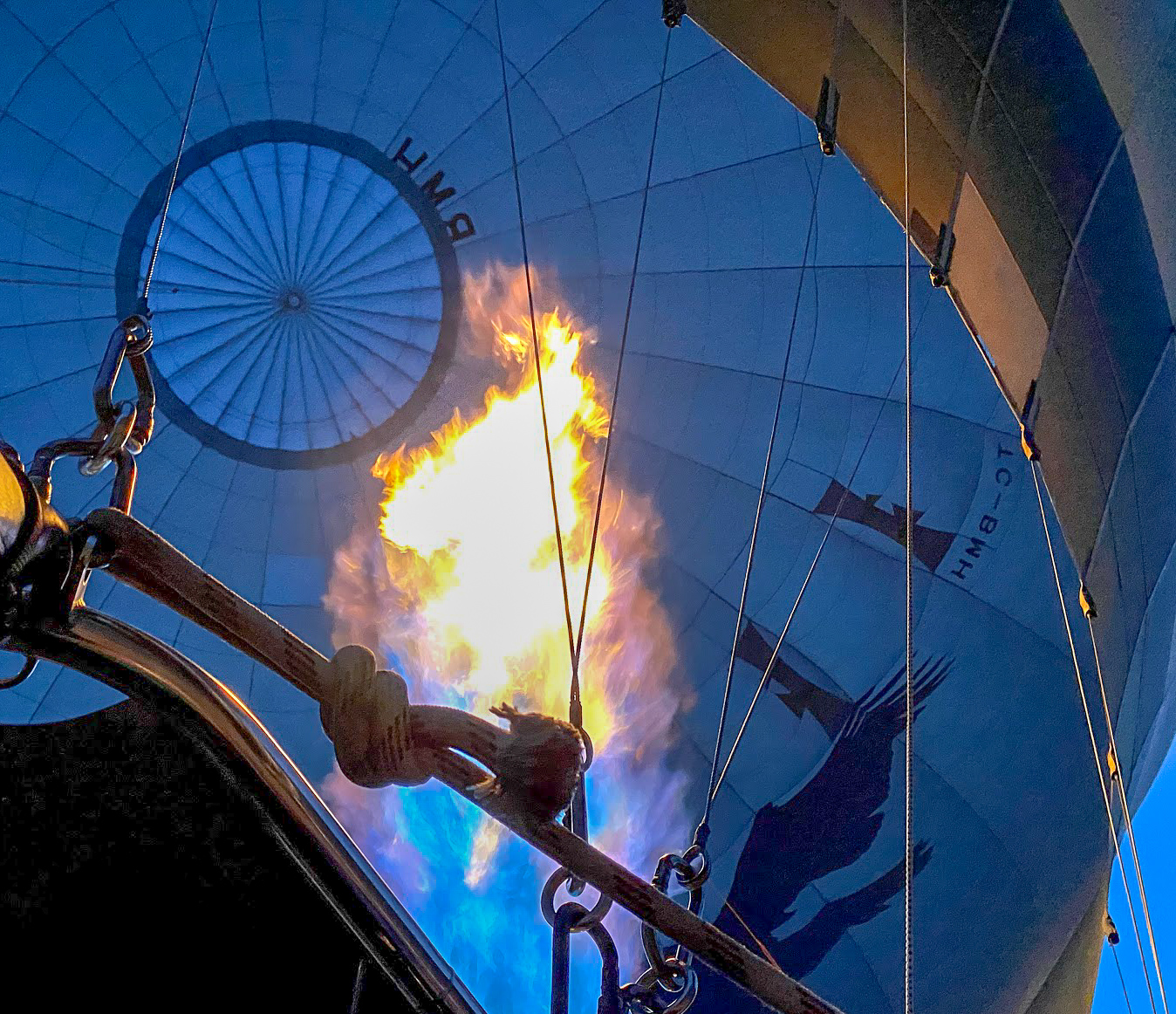 The kind staff of Turquaz Balloons offered to take photos as the balloon above warmed and began to take the strain of the basket. We were an inch or two from the ground when I worried it would float off without my phone, but clearly they knew better and I had it back with me, seconds before we really took off.

Rising from the ground, in a hot air balloon, is a very strange experience. The land drops away without any of the violence of a plane’s rumbling or g-force. Only the blasts of flame above you disturb the still morning. I find it amazing that, as you are flying with the wind, the air inside the basket feels totally calm.

The gentle movement of the basket rotated us slowly, and the scenery opened up beneath us as we crested the hill.

The landscape of Cappadocia is uniquely glorious. We hiked two valleys later in the day and realised that it is so hard to see just how weird and wonderful the rock formations are from ground level. I was immensely grateful to see if from above!

The two Turquaz Balloons waltzed slowly around each other, two of the first in the sky that morning.

Our balloon floated slowly, high up in the sky as we crossed a high plateau before the rock below divided into strange gorges.

Our pilot, Göksel, began to take the balloon down into the Rose Valley. The Rose Valley takes its name from the hue of the rocks. Strange stone formations seemed to grow around us. It was enough to satisfy any wannabe geologist. They were close enough to touch.

In what was to be a theme of our Turkey trip, we saw a random dog sleeping on one of the prominences. How it got there, what it ate and why it didn’t try to leap into the balloon were all a mystery! 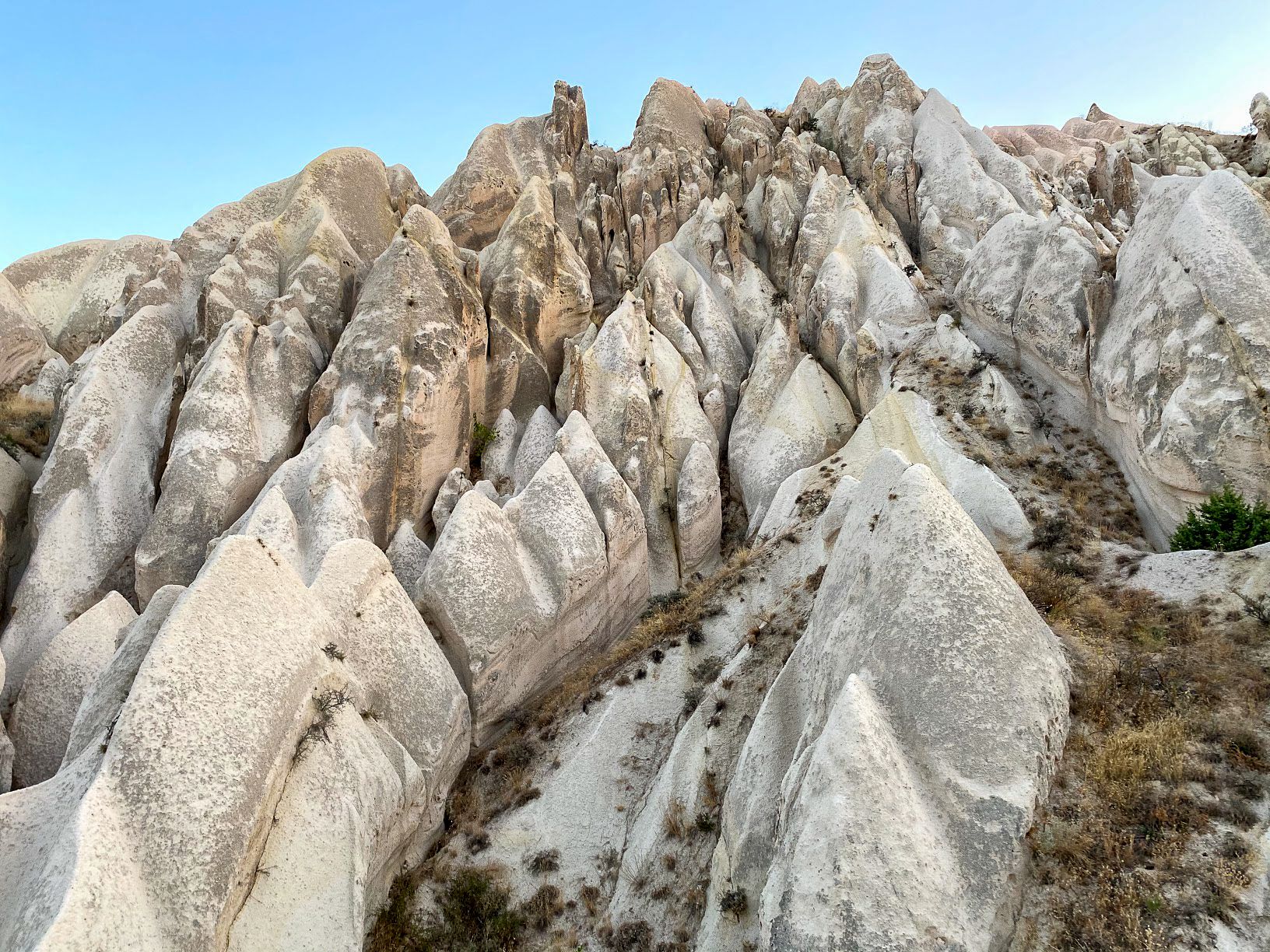 From our lower level, we could see the sky above filled with balloons. I found it mind-blowing that, despite the large number, COVID had reduced business to a quarter of what it was. Under normal circumstance, there could be over 120 balloons in the morning sky.

Above us, we could see the balloons changing colour as the sun finally began to burst above the horizon. It was at this point, Göksel took us up for “the money shot”. We rose steadily, faces glued to the east, and as the balloon ascended, it was flooded with golden rays. It was an astonishing moment and one I intend never to forget.

In Egypt, our balloon landing was very unpleasant so I was feeling very nervous about touching down. Mr Fluskey had the benefit of a normal landing in the UK so he soothed my jangling nerves with lots of kind words. To be honest, I feel pretty silly now as the landing was just fine. We made for one spot but the balloon sped up a little so Göksel decided to carry on for the next bluff.

The Turquaz Balloons review support vehicles raced along the roads below us, eager to be at the landing site to greet us. 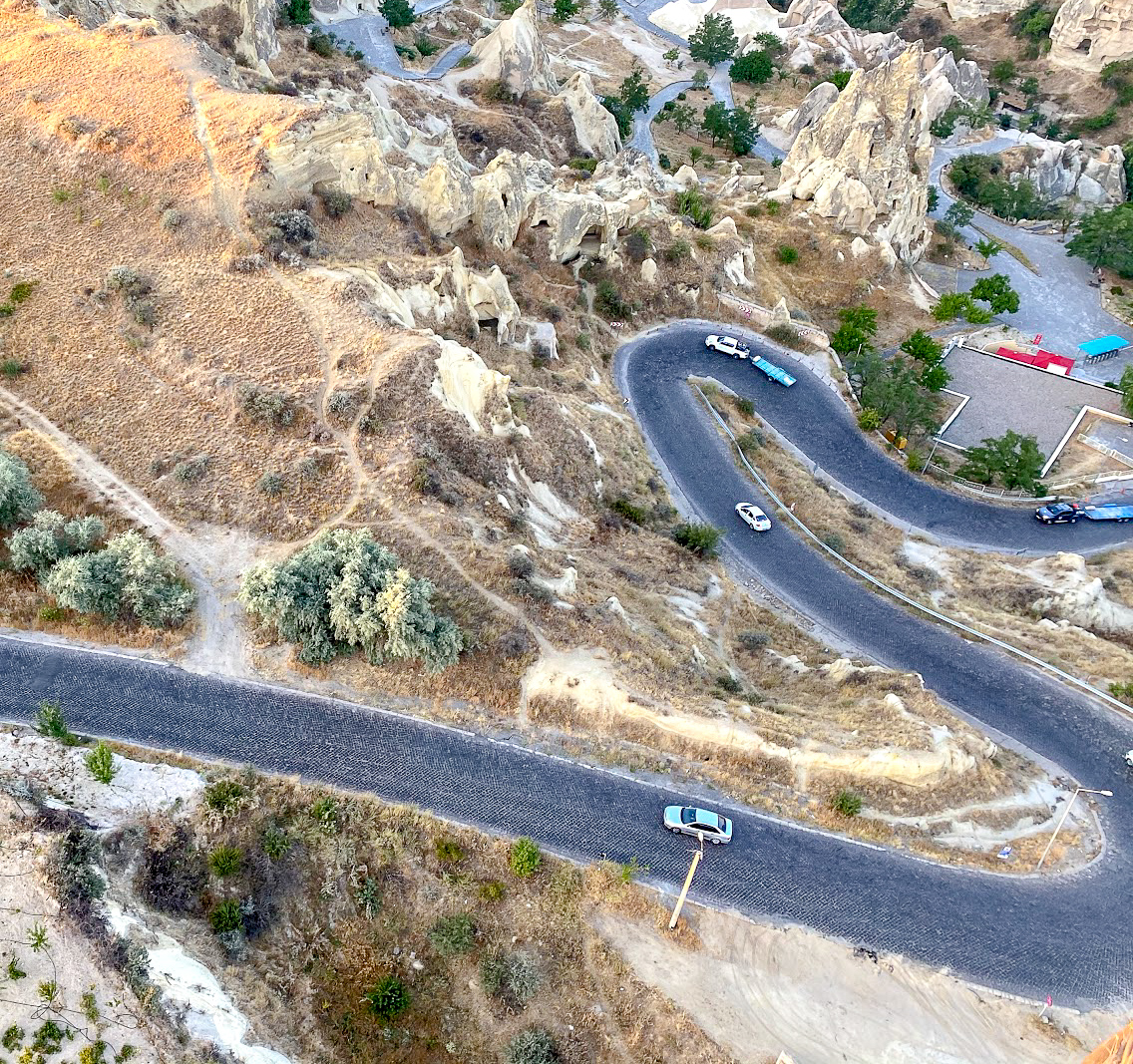 We all bent down in the basket, in the position we had been shown; hands clinging onto the leather holds and necks back and braced against the padded basket interior. I was deep-breathing but everyone else seemed super calm.

We bumped lightly and then briefly dragged along the floor before coming to a standstill. The basket wobbled slightly as the balloon couldn’t decide whether to tip us over or not. We stayed upright and to my total delight, Göksel then delicately flew the balloon from the ground onto the trailer. What skills that chap has. 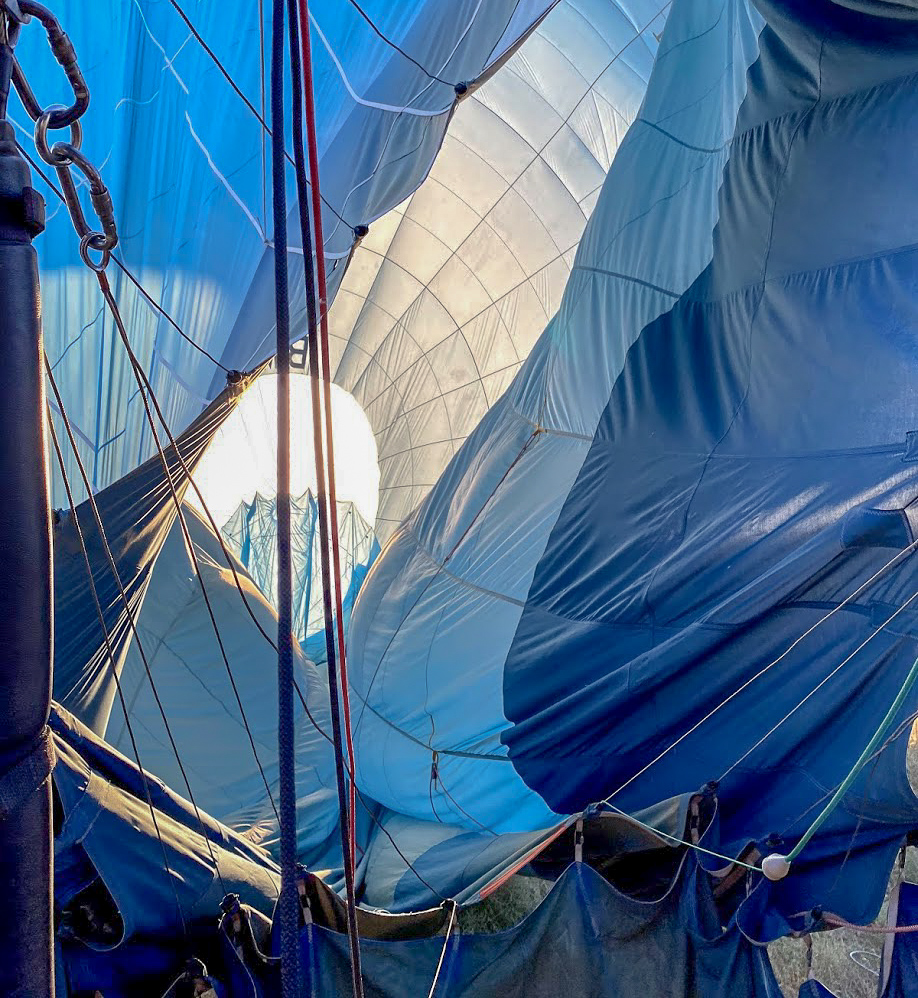 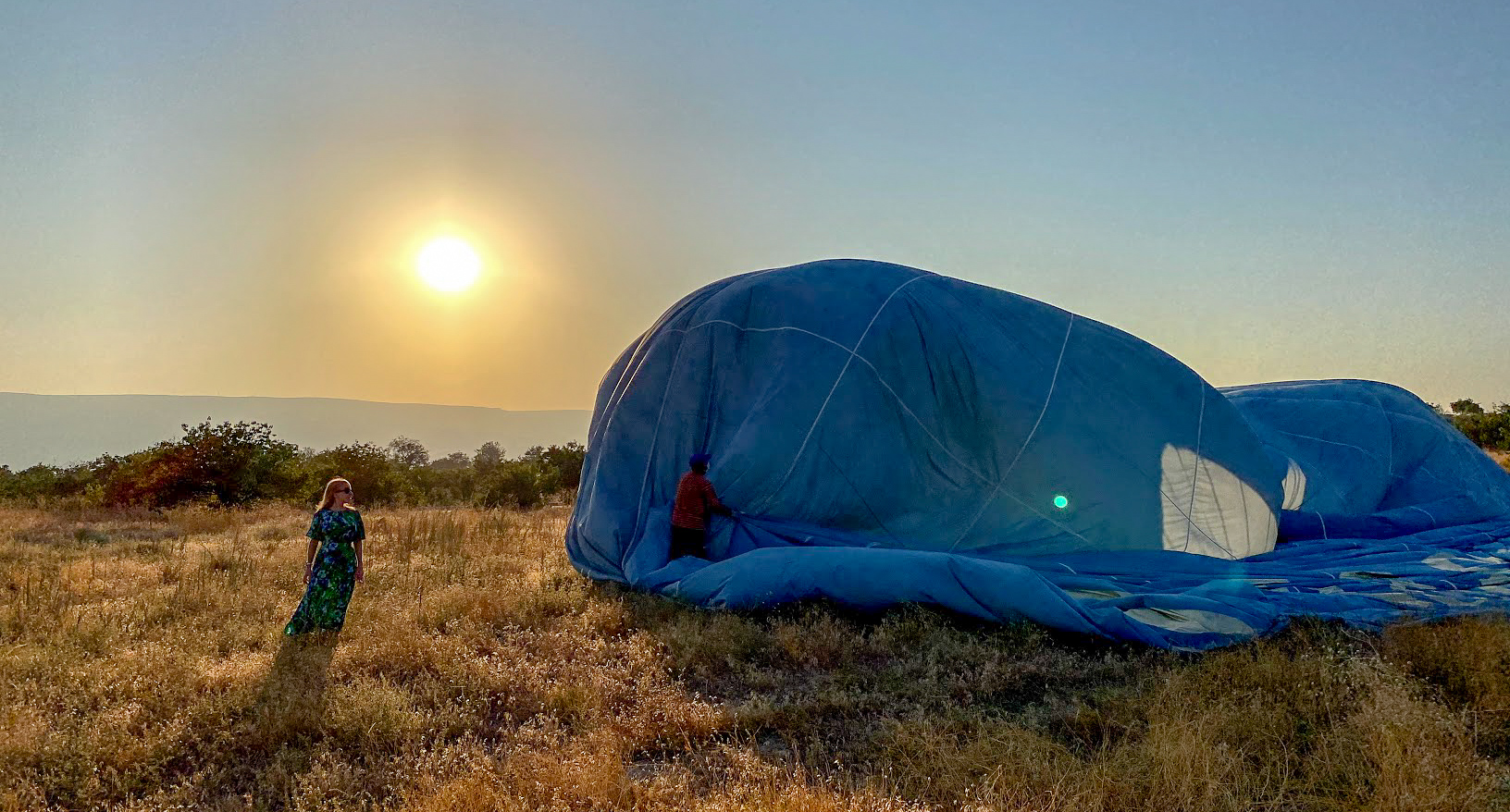 Turquaz Balloons continues the grand tradition, set by the first hot air balloonists in France, to end their flights with sparkling wine. Usually, this is opened and shared amongst the group, but due to COVID regulations, we were given a bottle per couple to take away instead. (We had this a few days later and it was very passable). Everyone was also presented with a certificate and medal, which now doubles as a fridge magnet in our house. 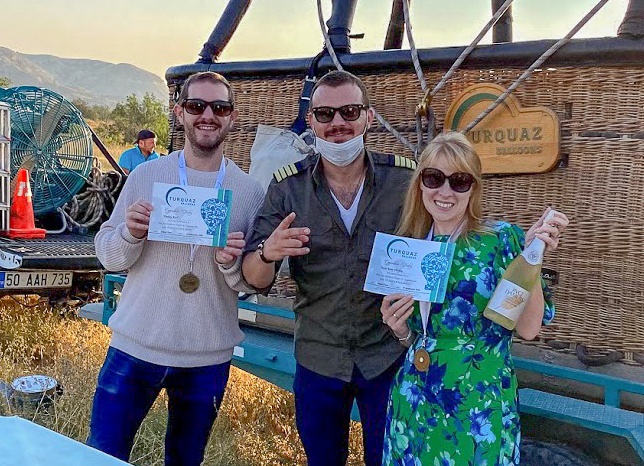 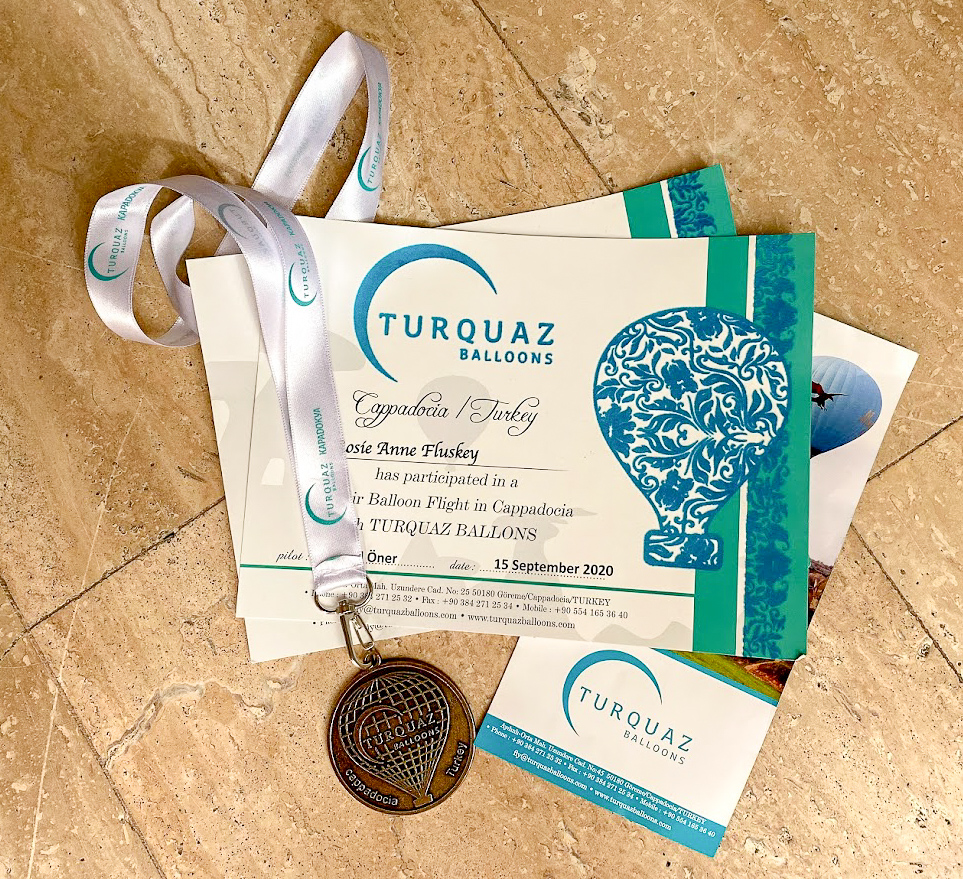 All too soon, we were back in the minibus and heading back to town and to our second breakfast of the day.

There are a plethora of options in Cappadocia, so why should you choose Turquaz Balloons?

What To Pack for your Hot Air Balloon Ride in Cappadocia

1.) A hat. This is especially needed if you are tall. The blasts of flame can be hot and you may want to protect your hair.

2.) A phone cover, or a camera with a strap. You want to take in the view, but I am sure, you will want to document this experience. Even if you aren’t clumsy, having a wrist or neck strap will ensure your devices stay with you, and not plummet to earth.

3.) Layers. Even in summer, the morning can be a little chilly. In winter, they are downright cold. Once the flames get going, and the sun comes up, you may need to lose a layer or two but you will be happy you brought them.

There is something so romantic about hot air balloons. They are a magical mix of relaxing and adventurous, as well as being an excellent way to sightsee! I would happily spend my day bobbing about in the sky and observing the world below, especially in Cappadocia. The scenery around Goreme is stunning and can only be truly appreciated with a birds-eye view. 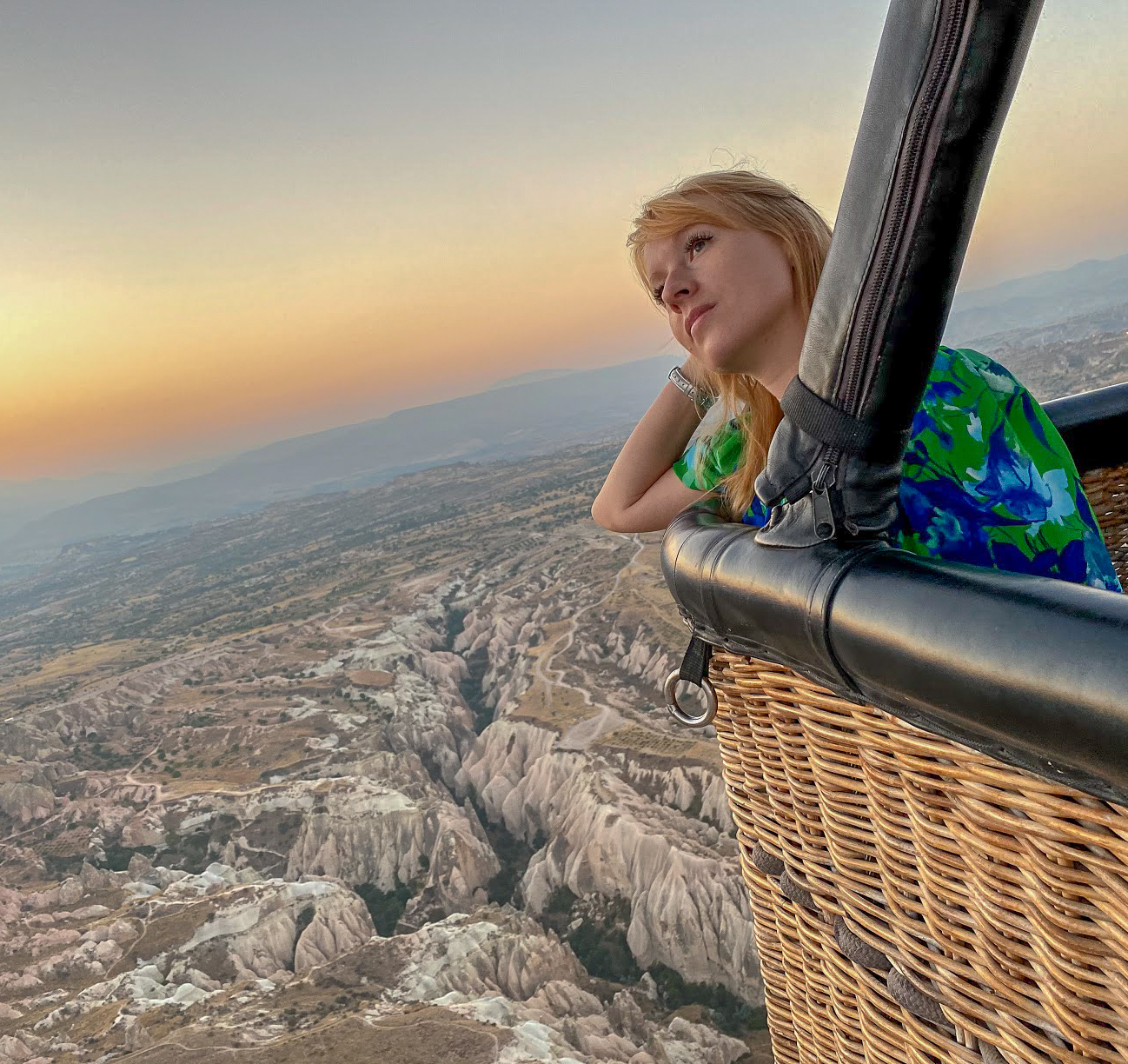 Turquaz Balloons was a wonderful blend of professional and laid back. Göksel showed immense skill, allowing us to take it all from all angles, and also great flashes of fun. I am so glad we chose Turquaz Balloons as I felt in safe hands the whole time, restoring my faith in balloon landings!