British Airways is the UK’s flagship carrier. If you were around in the 1990s, it probably conjures up images of pearls, leather seats and in the background a sweet rendition of Aria on Air. However, in recent years, British Airways has changed. They have bought in lots of new initiatives and cost cutting efforts (do you remember when they took the second olive out of their martini and saved a bundle?). Our recent trip to Funchal, Madeira saw us booking on BA for the first time in years which gave us the chance to see the changes in British Airways economy for ourselves. 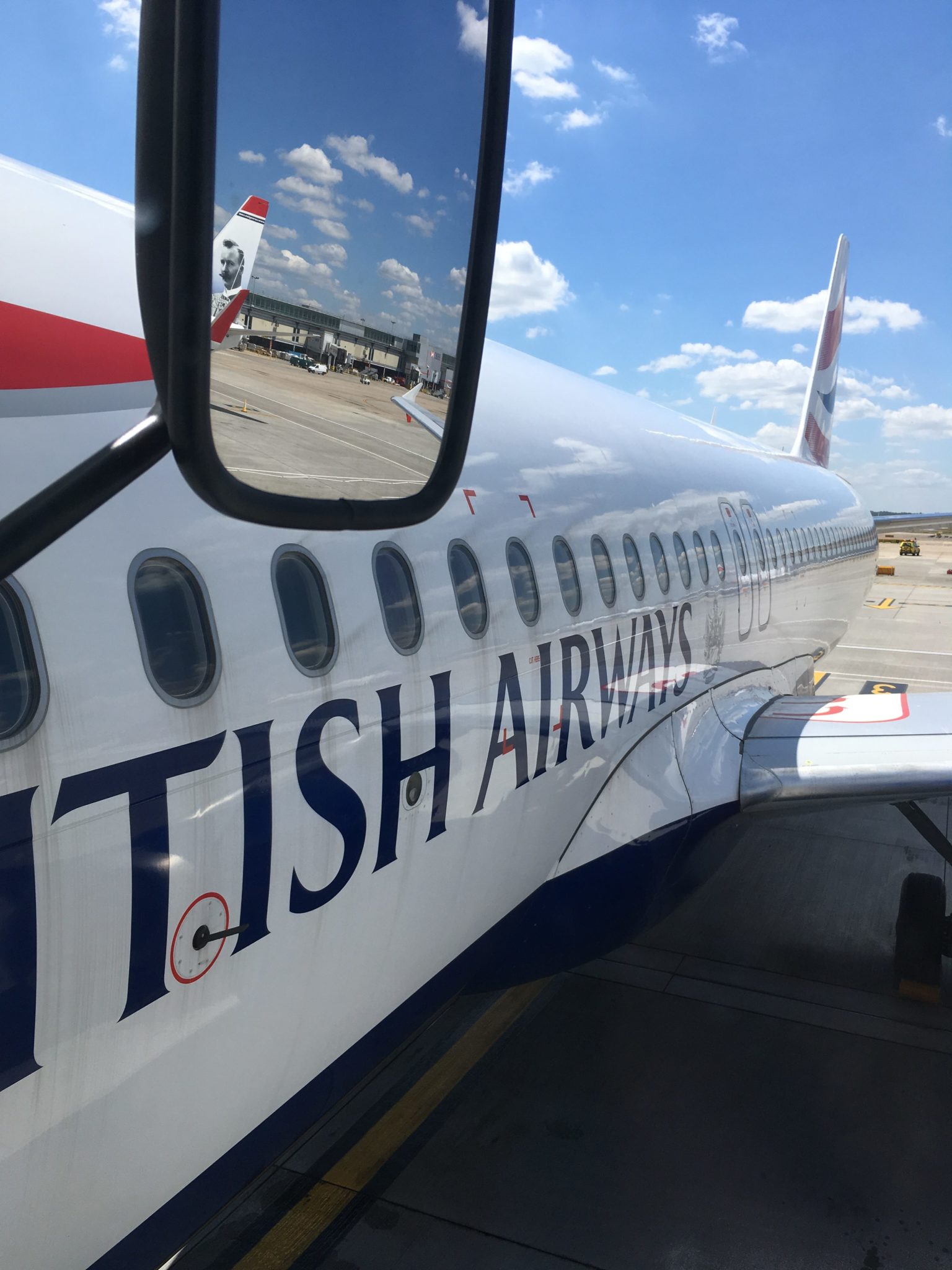 The Review of British Airways Economy

The British Airways app is really very good. We used it to book our flight and then it reminded us to enter our advance passenger information. I did that one day when I was bored and waiting for a train…a very good use of time if I do say so myself. Twenty-four hours before our flight, a little reminder notification to check in popped up. As all our info was already in there, it was a very quick and easy process.

Our fare was a British Airways economy hand luggage only fare. We were free to take a large carry on bag with no weight restrictions, and a smaller personal item (handbag, laptop bag, or in my case, my beloved Cath Kidston rucksack).

Check out all our flight reviews including Virgin Atlantic and Emirates 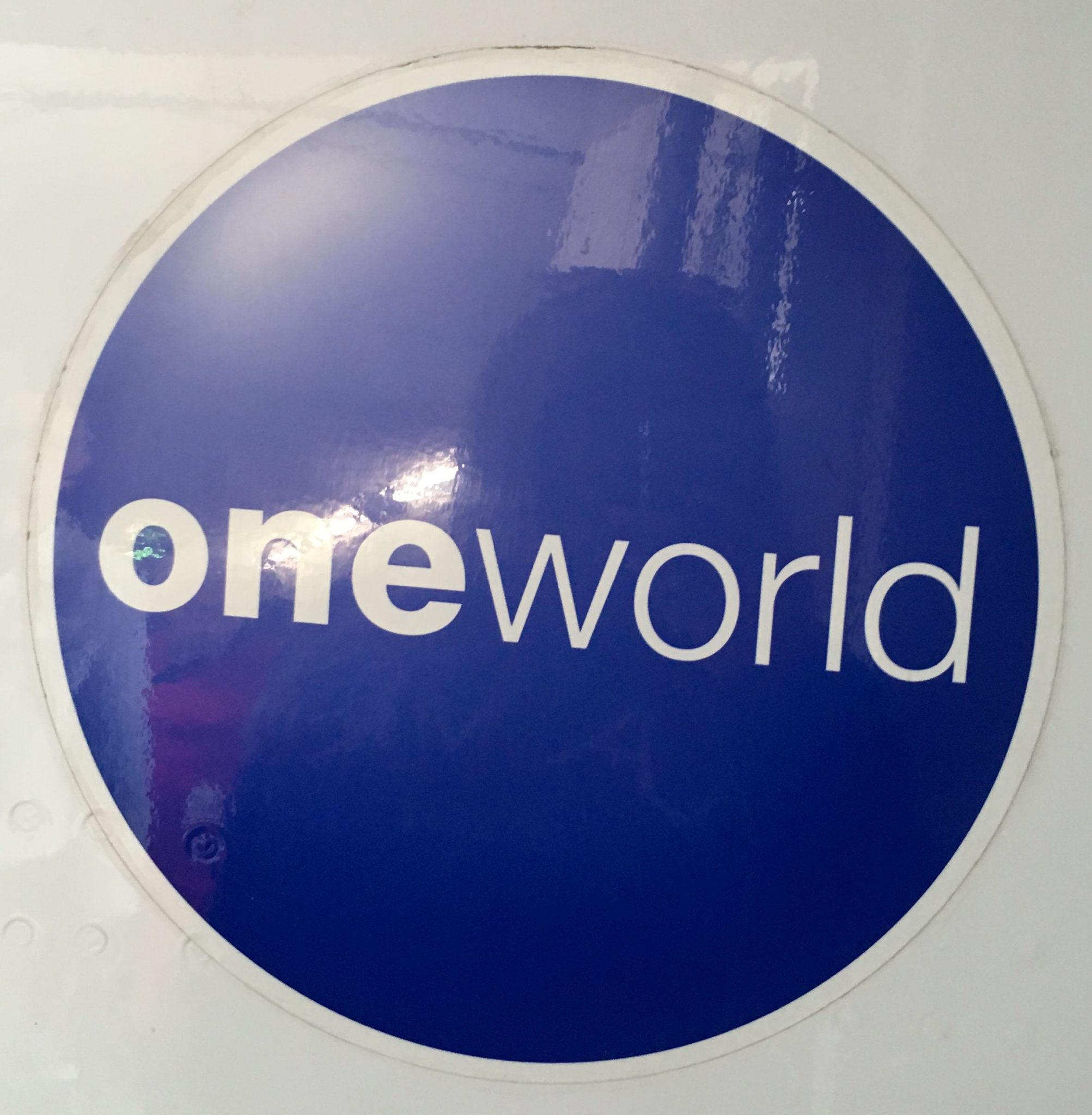 Breezing through the airport, not having to stop at check in, we were done with security in a matter of minutes. We bought some food (more on that later) and then the app updated to show our gate number.

Boarding was swift and simple. Everyone is assigned a “group” and then they are welcomed forwards by group number. Easy peasy. 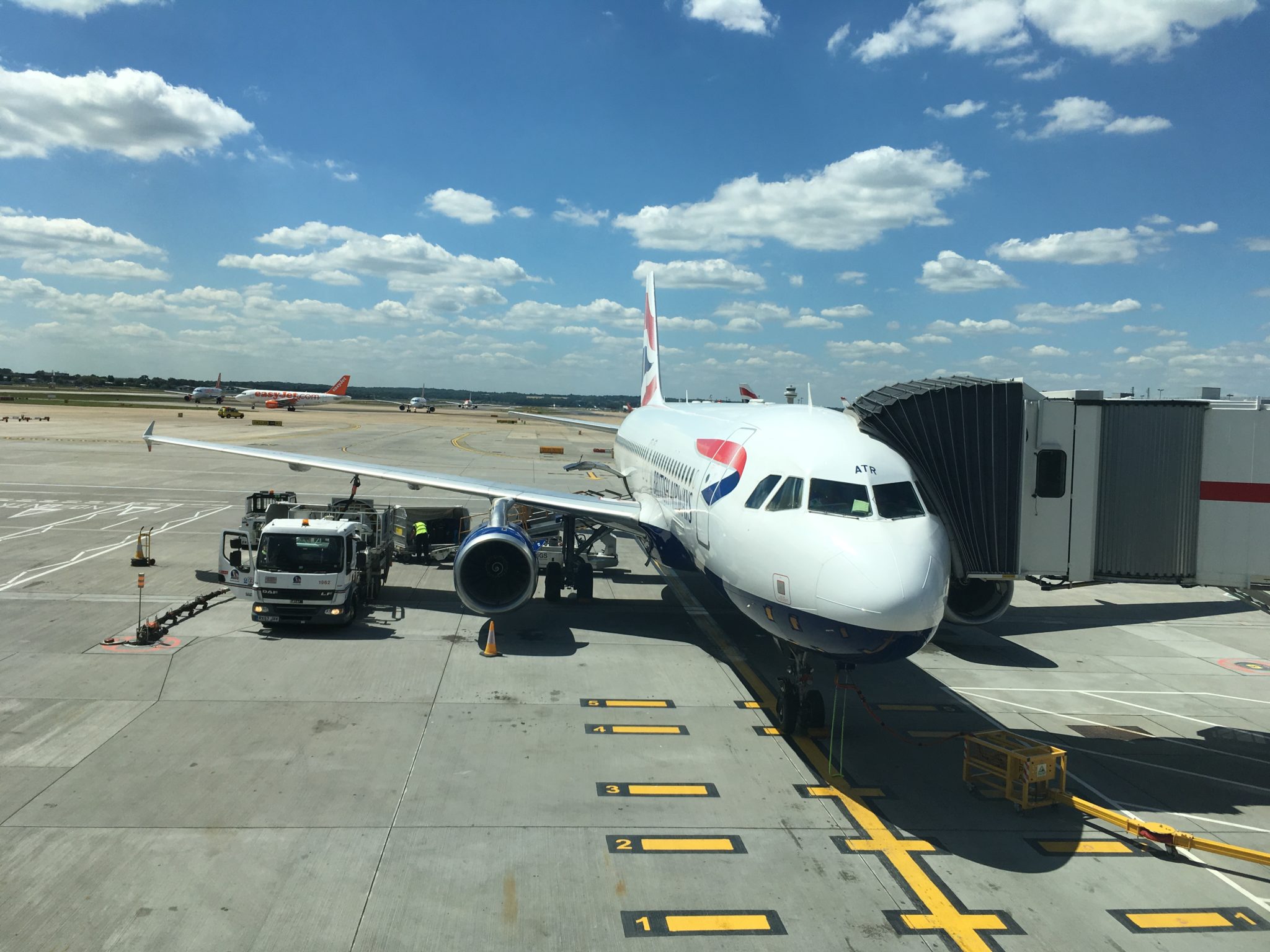 The plane was just that, plain. White lights lit the navy blue and white cabin. Despite the cold colour scheme, the welcome from the crew was very warm…and actually the crew were lovely throughout, so that made the whole flight much more pleasant.

The windows were the Airbus A320 standard. They aren’t huge, and the second layer makes them even smaller.. 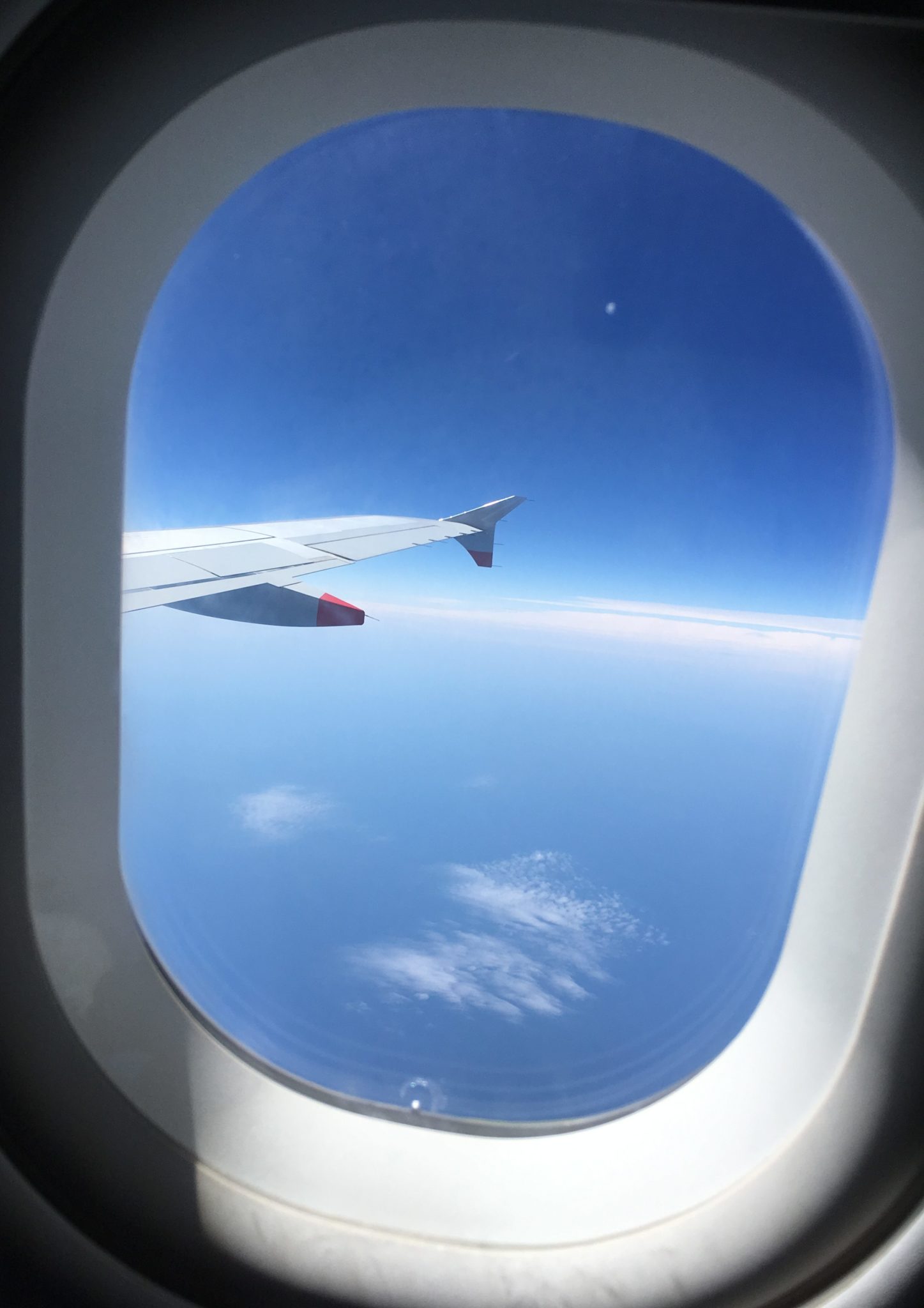 The configuration is the normal 3, 3 set up, as seen on most Airbus A320s. Travelling as a couple, this is always irritating. We like the window and so we are always hemmed in by a stranger; not good when you need to pop to the loo.

British Airways have chosen a very nice seat. Well, not the seat per se, but the seat covers. They have a navy blue leatherette cover with nice stitch detailing. On both our outbound and return flight, we were greeted by a previous passengers crumbs. It wasn’t very nice but at least the leather made it easy to wipe it off.

The leg room was pretty average at 30 inches. The width was 17 inches, which was fine. 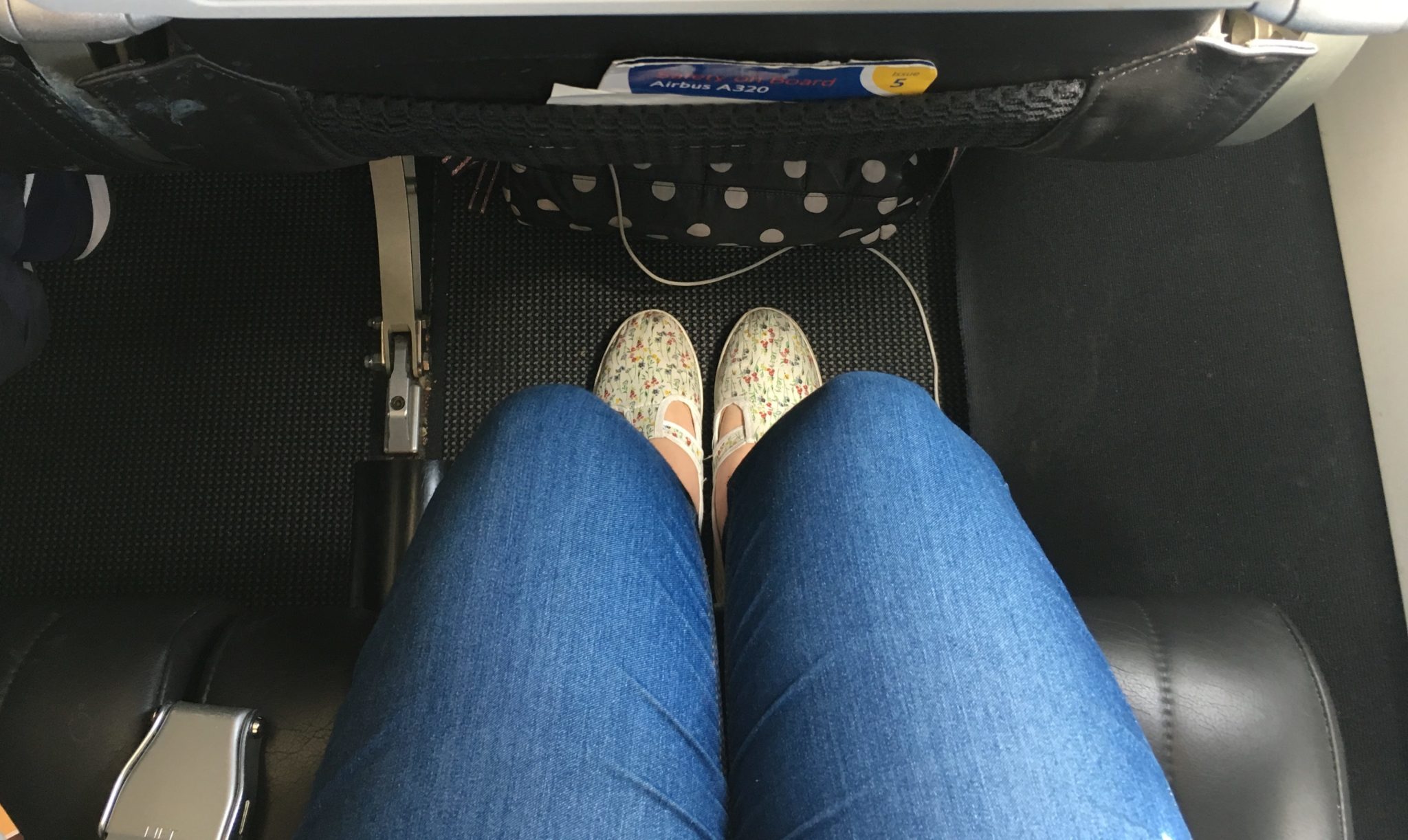 The head rest is nice and adjustable. It goes up quite a way. The side flaps bend well, and are nice and stiff, but they are not that big so are a little too small to hold your head very well. It also has an indent of the BA logo which is cool.

The arm rests are a little thin, and ours had a sticker that wouldn’t come off.

The seat back pocket space is pretty good. There is a magazine pocket at the top of the seat. It only has a plastic piece at the bottom to stop the magazines falling out so don’t put little bits and bobs in here or they will get lost.

Below the table is a mesh pocket. On our outbound flight it was nice but on the way home, both Mr Fluskey’s and my pockets were ripped. It was a bit shabby. 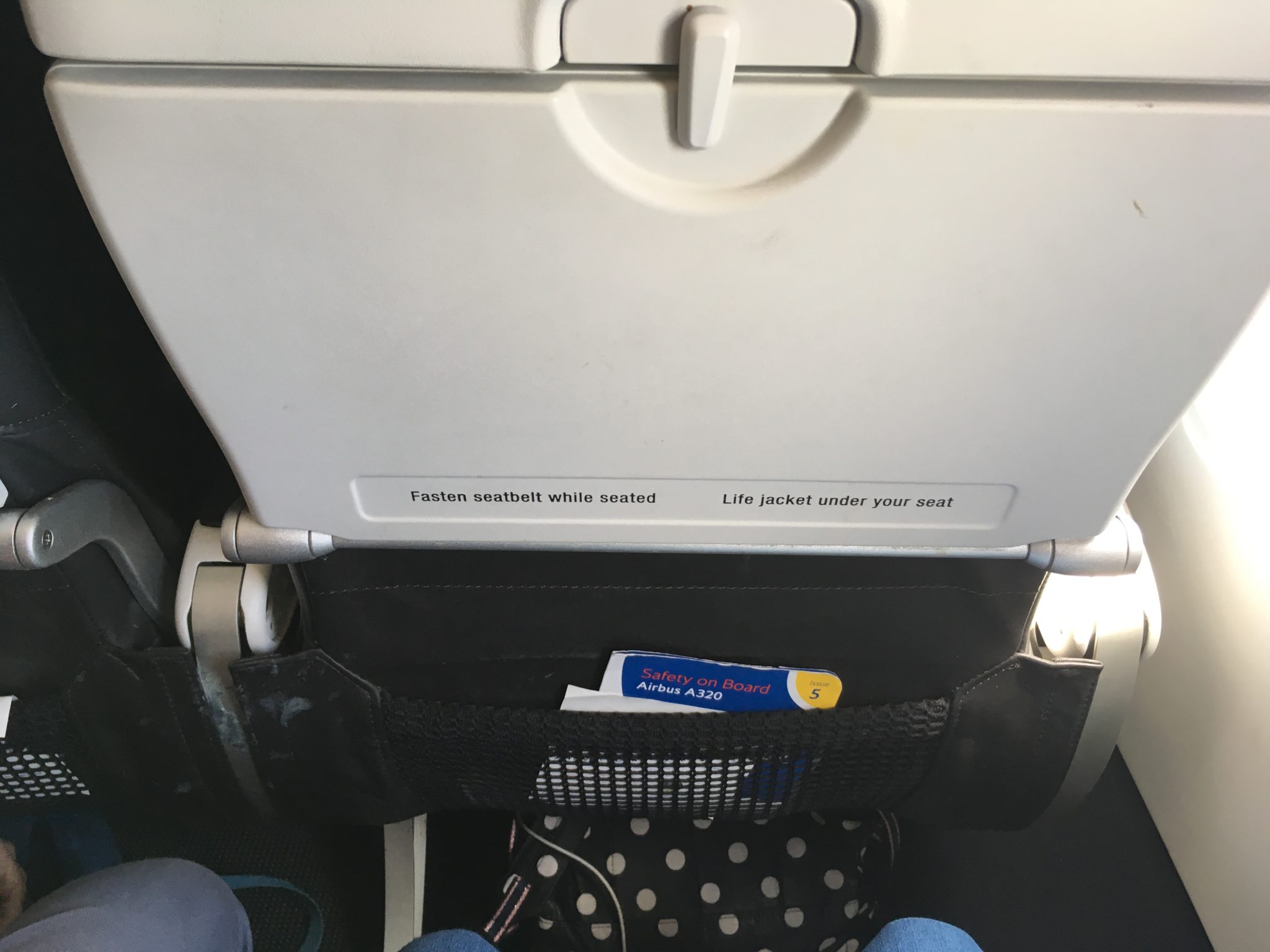 The seats reclined, but by about half an inch. I have read that they are doing away with even that on their new planes. Four hours is quite a long flight, surely that deserves a better level of comfort.

British Airways has a very clear policy when it comes to hand luggage. You are allowed one larger piece of hand luggage to go above you in the overhead locker. Additionally, you can have a smaller item that must go under the seat in front of you. This got a yellow tag in the airport.

Check out Top Ten Tips to Pack Your Liquids Bag for Carry On Luggage Like a Pro!

Some people didn’t understand this so the crew had to go along and request that anything with a yellow tag was removed from the overhead bins. The bins weren’t deep enough to have bags on their thin side. This always reduces the capacity quite badly. People near us had their bags somewhere near the front as there was no room left nearby.

Read all about our travels in Portugal

Considering this was a four hour flight, the entertainment provision was very poor. British Airways considers this a short haul flight and so they provide no video or audio. This is the same for economy and business.

The only entertainment was the High Life and Business Life magazines in the seat back pocket. Neither interested me all that much so after a quick flick through, they were abandoned. 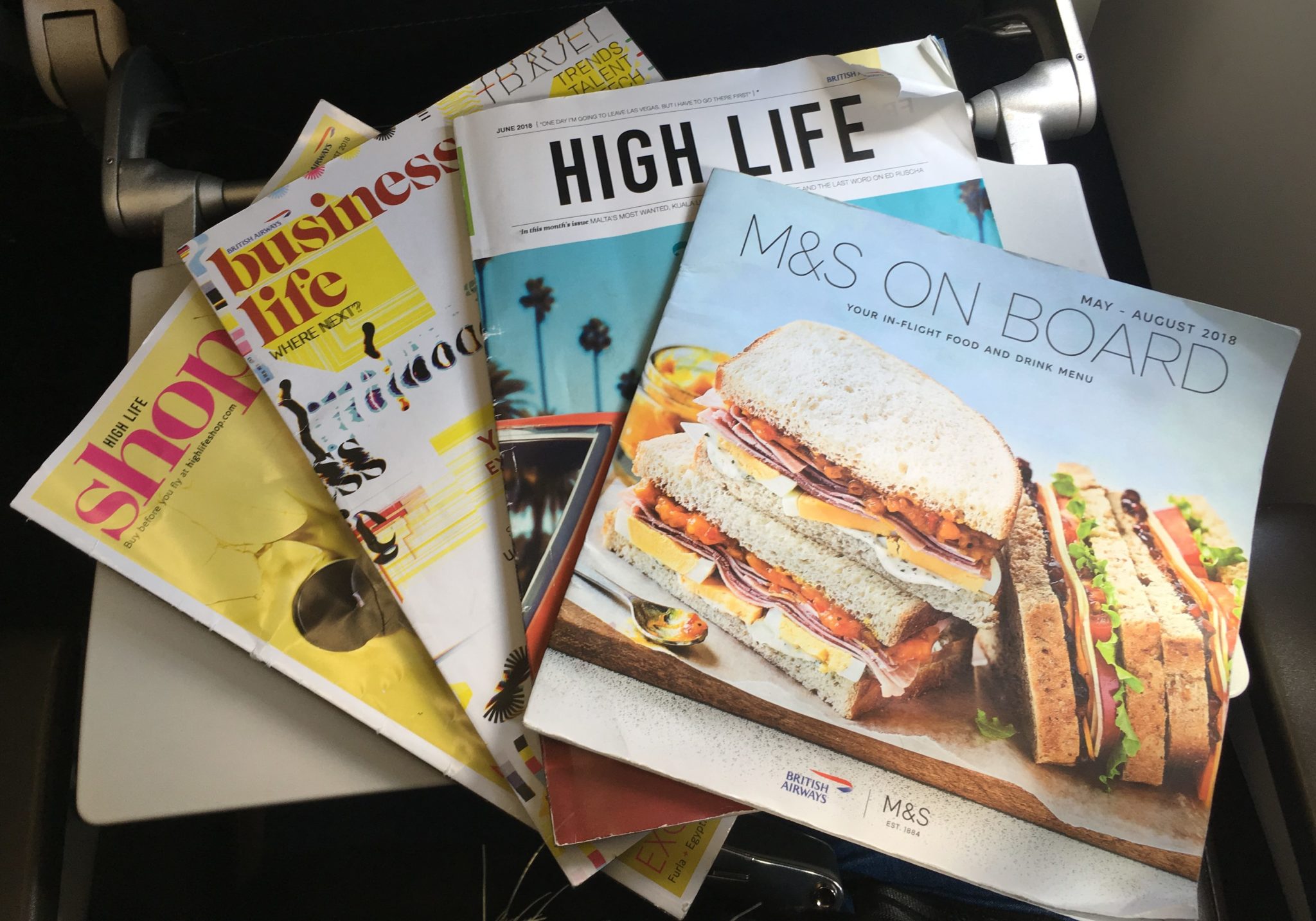 Thank goodness we had brought the iPad chock full of Netflix content!

We weren’t given any kind of amenity kit on this flight.

The bathrooms were very tight and had no cute little extras in…it was just like being on a budget flight. 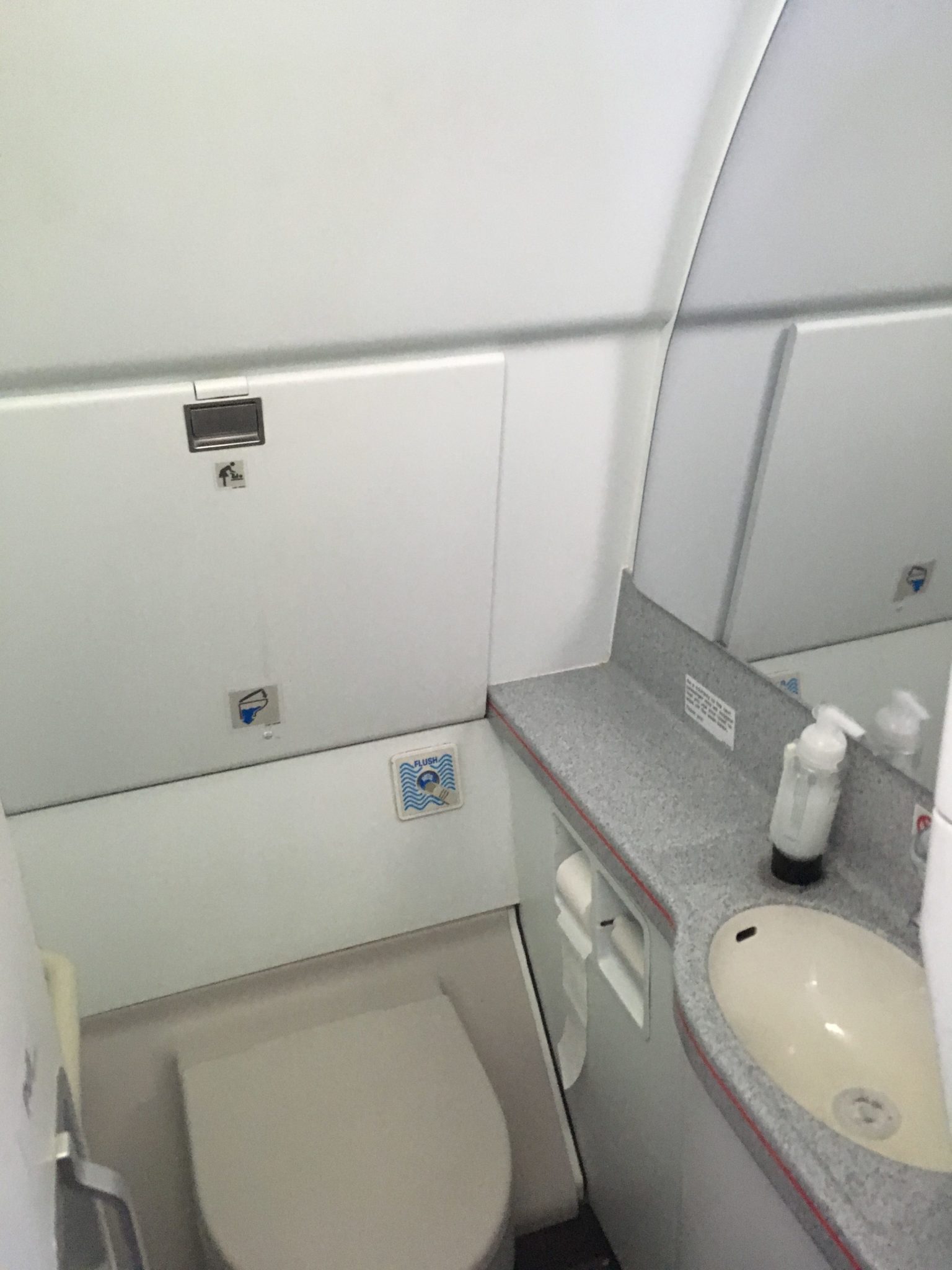 So if you are flying on British Airways, you get a snack right? Wrong! Again, as this was a short haul flight, no food or drinks were included. Luckily we already knew about this and so had bought lunch at the airport before boarding.

If you are in British Airways economy you are given a book full of Marks and Spencer’s products that you can purchase. I like to have a look through and see what’s on offer.

The only things that appealed to me were the Globetrotting Percy sweets (who doesn’t love Percy Pigs?) and the drinks at the end. We decided to treat ourselves and got a drink each.

Considering the length of four hours, this was not a particularly comfortable or enjoyable flight. Other than the fancier seats, and the extra handbag in out hand luggage allowance, we may as well have been on the easyJet flight that goes to Madeira! It would have saved us a bit of money and we would have spent the same on food and drink anyway.

Honestly, I am quite disappointed in British Airways economy offering on this short haul route. The hand luggage allowance is great, as is the app, but other than that…? I can’t say I would recommend it unless you like flying to or from Heathrow Terminal 5….but the Funchal flight goes from London Gatwick. At least their long haul offering is still very competitive.

Now you’re in Madeira, why not go Whale and Dolphin Watching with VMT Madeira 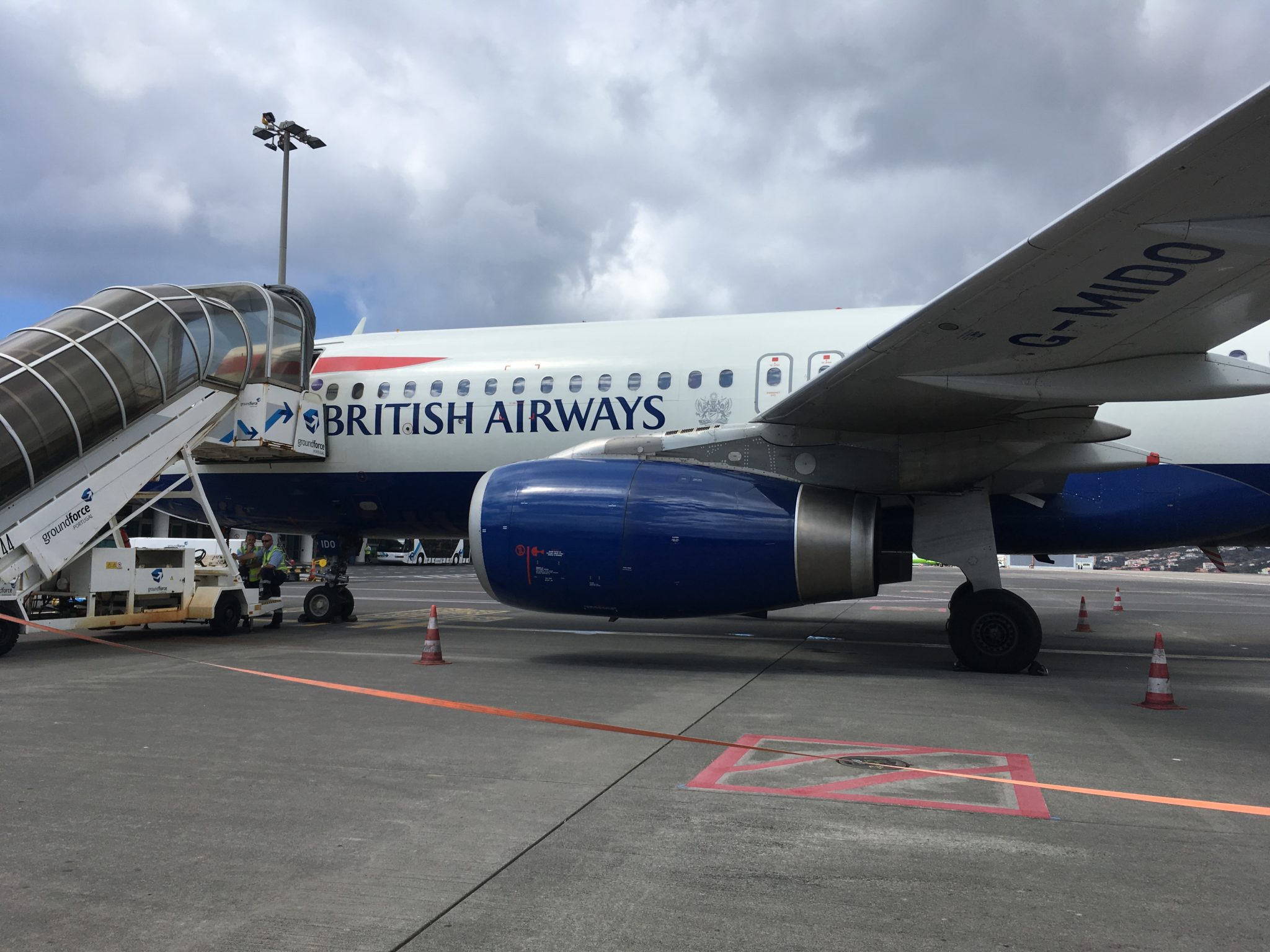